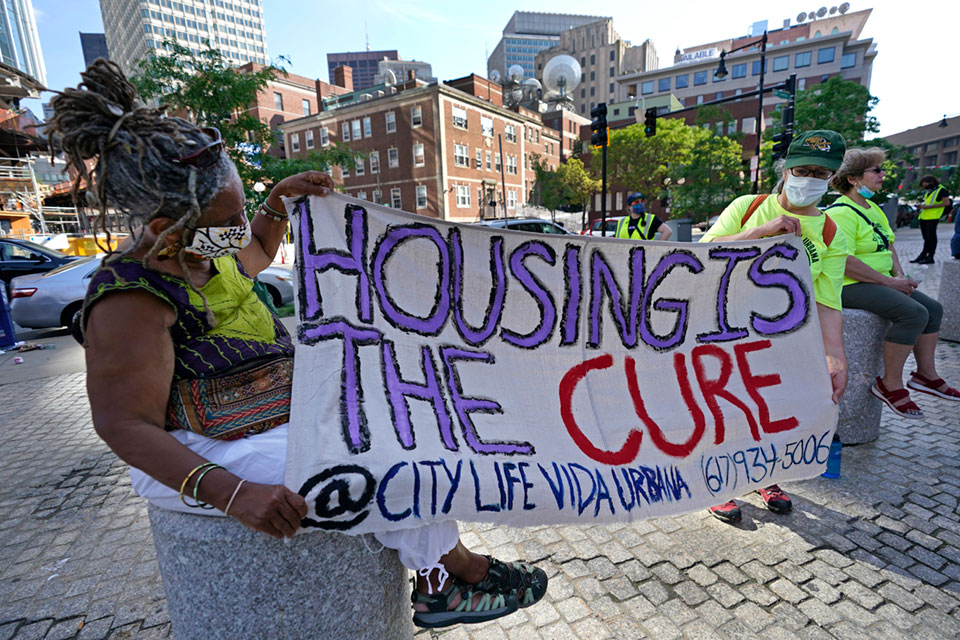 BOSTON (AP) — The Biden administration on Thursday announced it will allow a nationwide ban on evictions to expire Saturday, arguing that its hands are tied after the Supreme Court signaled it could only be extended until the end of the month.

The White House said President Joe Biden would have liked to have extended the federal eviction moratorium due to spread of the delta variant. Instead, Biden called on "Congress to extend the eviction moratorium to protect such vulnerable renters and their families without delay."

The moratorium was put in place put in place last September by the Centers for Disease Control and Prevention.

"Given the recent spread of the Delta variant, including among those Americans both most likely to face evictions and lacking vaccinations, President Biden would have strongly supported a decision by the CDC to further extend this eviction moratorium to protect renters at this moment of heightened vulnerability," the White House said in a statement.

"Unfortunately, the Supreme Court has made clear that this option is no longer available."

The court mustered a bare majority, 5-4 last month, to allow the eviction ban to continue through the end of July. One of those in the majority, Justice Brett Kavanaugh, made clear that he would block any additional extensions unless there was "clear and specific congressional authorization."

By the end of March, 6.4 million American households were behind on their rent, according to the Department of Housing and Urban Development. As of July 5, roughly 3.6 million people in the U.S. said they faced eviction in the next two months, according to the U.S. Census Bureau's Household Pulse Survey.

Dr. Rochelle Walensky, director of the Centers for Disease Control and Prevention, had said in June this would be the last time the moratorium would be extended when she set the deadline for July 31. It was initially put in place to prevent further spread of COVID-19 by people put out on the streets and into shelters.

Housing advocates and some lawmakers have called for the moratorium to be extended, due to the increase in coronavirus cases and the fact so little rental assistance has been distributed.

Congress has allocated nearly $47 billion in rental assistance that is supposed to go to help tenants pay off months of back rent. But so far, only about $3 billion of the first tranche of $25 billion has been distributed through June by states and localities. Some states like New York have distributed almost nothing while several have only approved a few million.

"The confluence of the surging delta variant with 6.5 million families behind on rent and at risk of eviction when the moratorium expires demands immediate action," said Diane Yentel, executive director of the National Low Income Housing Coalition. 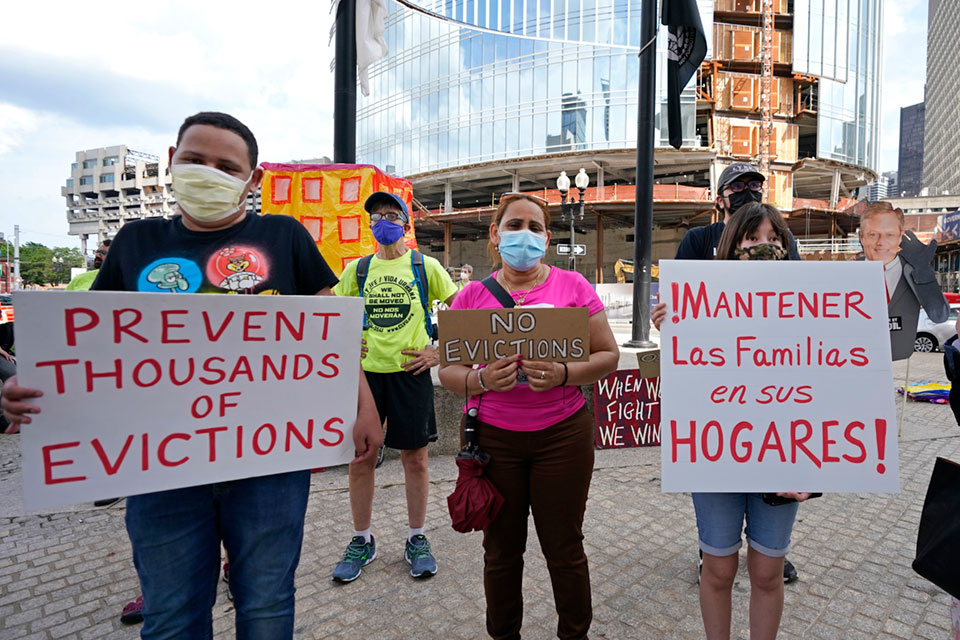 In this June 9, 2021, photo, people hold signs during a rally in Boston protesting housing eviction. The Biden administration announced Thursday, July 29 it will allow a nationwide ban on evictions to expire Saturday, arguing that its hands are tied after the Supreme Court signaled it would only be extended until the end of the month. The White House said President Joe Biden would have liked to extend the federal eviction moratorium due to spread of the highly contagious delta variant. Instead, Biden called on "Congress to extend the eviction moratorium to protect such vulnerable renters and their families without delay." (AP Photo/Elise Amendola)

The trouble with rental assistance has prompted the Biden administration to hold several events in the past month aimed at pressuring states and cities to increase their rental assistance distribution, coax landlords to participate and make easier for tenants to get money directly.

Associate Attorney General Vanita Gupta also has released an open letter to state courts around the country encouraging them to pursue measures that would keep eviction cases out of the courts. On Wednesday, the Consumer Financial Protection Bureau unveiled a tool that allows tenants to find information about rental assistance in their area.

Despite these efforts, some Democratic lawmakers have demanded the administration extend the moratorium.

"This pandemic is not behind us, and our federal housing policies should reflect that stark reality."

"With the United States facing the most severe eviction crisis in its history, our local and state governments still need more time to distribute critical rental assistance to help keep a roof over the heads of our constituents," Democratic U.S. Reps. Cori Bush of Missouri, Jimmy Gomez of California and Ayanna Pressley of Massachusetts said in a joint statement.

But landlords, who have opposed the moratorium and challenged it repeatedly in court, were against any extension. They have argued the focus should be on speeding up the distribution of rental assistance.

This week, the National Apartment Association and several others this week filed a federal lawsuit asking for $26 billion in damages due to the impact of the moratorium.

The NAA "has long held that eviction moratoria are fundamentally flawed policies, leaving renters saddled with insurmountable debt and rental housing providers unfairly holding the bag despite unprecedented efforts to keep their residents housed over the past 18 months," Bob Pinnegar, the president and CEO of the NAA, said in a statement.

In Oregon renters are protected against evictions if they provide proof they have applied for rent assistance. Eligible renters who live in Multnomah County may be entitled to 90 days of protection from eviction after providing their landlord with the required notice. More information can be found at OregonRentalAssistance.org.

Meanwhile, Governor Brown has extended Oregon's mortgage foreclosure moratorium until September 30, 2021. Homeowners who have lost income due to the pandemic and have been struggling to keep up with mortgage payments have until September 30 to begin repaying.