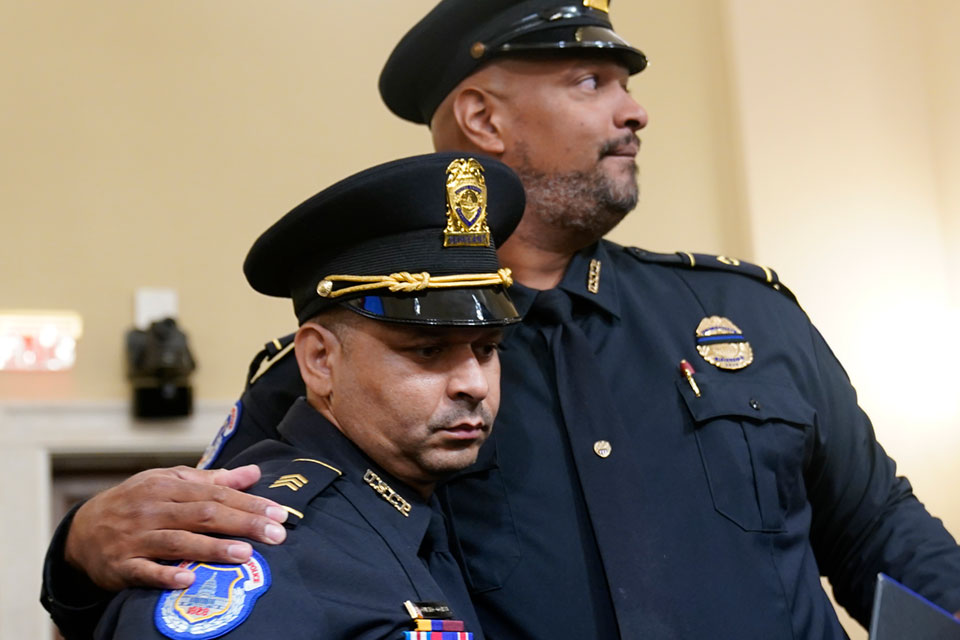 It had only been hinted at in previous public examinations of the Jan. 6 Capitol insurrection: Scores of rioters attacked police officers not just with makeshift weapons, stun guns and fists, but with racist slurs and accusations of treason.

Four officers, two from the U.S. Capitol Police and two from the D.C.'s Metropolitan Police Department, on Tuesday detailed the racism and bigotry they encountered during the violent assault on the Capitol. Their direct, harrowing accounts laid out the hours when the pro-police sentiment of supporters of former President Donald Trump was pushed aside, consumed by the fury of wanting to keep him in the White House.

Capitol Police Officer Harry Dunn told lawmakers about an exchange he had with rioters, who disputed that President Joe Biden defeated Trump in the last presidential election. When Dunn, who is Black, argued with the rioters that he voted for Biden and that his vote should be counted, a crowd began hurling the N-word at him.

"One woman in a pink 'MAGA' (Make America Great Again) shirt yelled, 'You hear that, guys, this n——— voted for Joe Biden!'" said Dunn, who has served more than a dozen years on the Capitol Police force.

"Then the crowd, perhaps around 20 people, joined in, screaming "Boo! F——— n—— !" he testified. He said no one had ever called him the N-word while he was in uniform. That night, he sat in the Capitol Rotunda and wept. 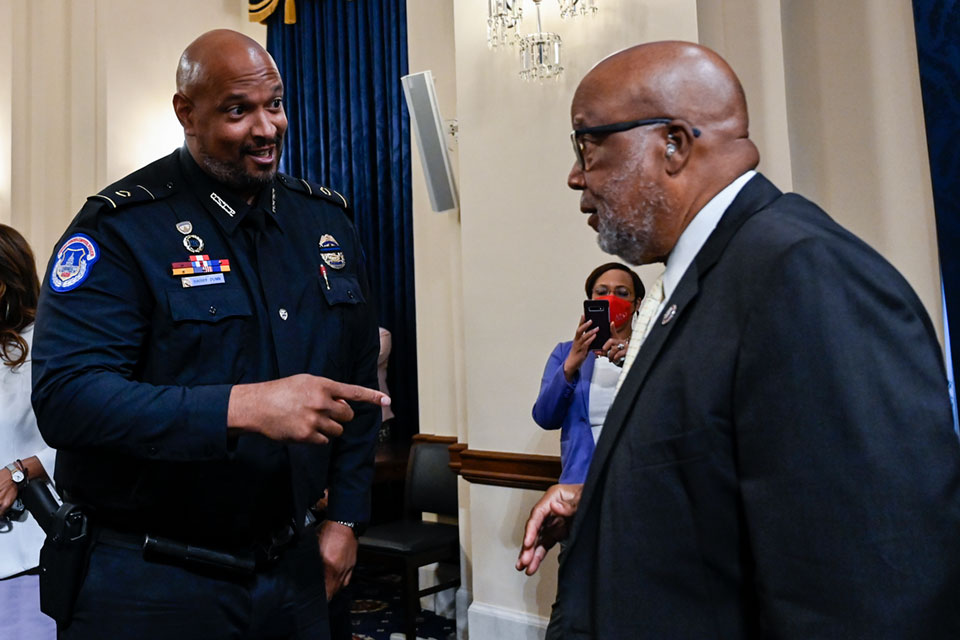 Ahead of Tuesday's hearing, House Intelligence Committee Chairman Adam Schiff, a member of the panel, said the Capitol and D.C. officers would provide insight into "what it was like to be on the front lines."

However, Dunn was also speaking to the experience of being an African American police officer, who make up 29% of roughly 2,300 officers and civilians serving on the Capitol Police force.

Dunn said another Black male officer told him that, while confronting the rioters on Jan. 6, he was told to "Put your gun down and we'll show you what kind of n—— you really are!"

The panel's chairman, Democratic Rep. Bennie Thompson of Mississippi, pressed Dunn further about how he felt being an African American officer facing down racists and enduring racial slurs in the halls of democracy.

"It's just so disheartening that people like that will attack you just for the color of your skin," Dunn replied. "Once I was able to process it, it hurt. My blood is red."

While Black Americans make up roughly 13% of the U.S. population, they were roughly 11% of all police officers in 2016 across a sampling of 18,000 local law enforcement agencies in the U.S., according to the U.S. Bureau of Justice Statistics. Over 71% of officers were white in 2016.

It's this kind of treatment endured by Black men and women in law enforcement that policing experts say makes recruitment and diversity among U.S. police forces challenging. The law enforcement profession has also struggled with its origins in America, dating back to the slave patrols in the early 1700s formed to capture people who escaped slavery and terrorize the enslaved into submission. Although many African Americans have served valiantly on local and federal police forces since the civil rights movement, data shows Black Americans are still arrested in disproportionate numbers and more likely to be fatally shot by police.

Another Capitol Police officer, Sgt. Aquilino Gonell, wiped away tears as he recalled the story of his immigration to the U.S. from the Dominican Republic, only to face fellow Americans who considered him a traitor for defending the Capitol on Jan. 6.

"It was very disappointing," Gonell said. "I saw many officers fighting for their lives against people, rioters (and) citizens, turning against us." 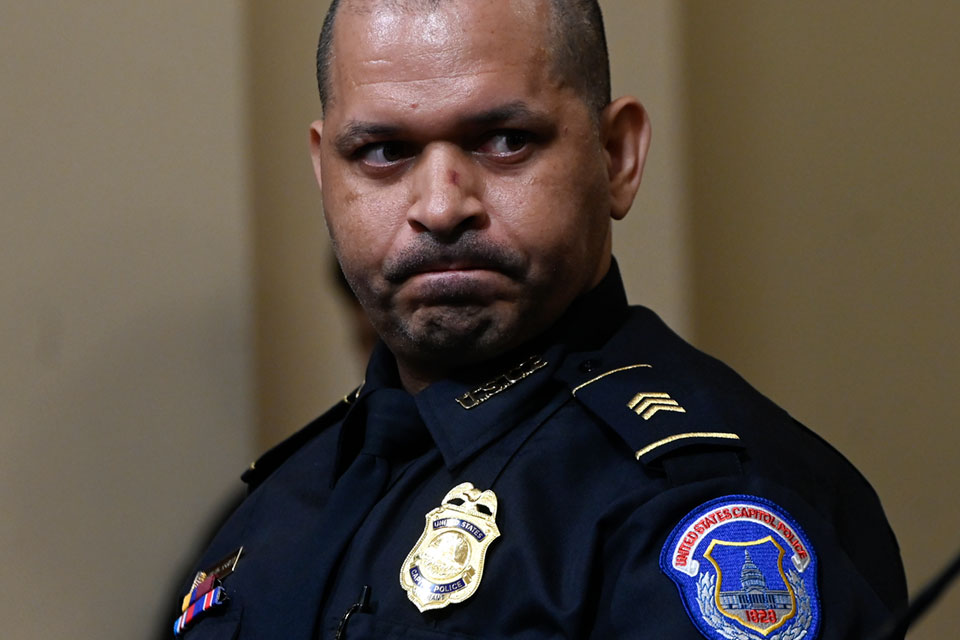 Gonell, an Iraq War veteran, also called out the disparate law enforcement response to the overwhelmingly white crowd of rioters and the response to racial justice protests in 2020 that followed the murder of George Floyd and the police involved deaths of other Black Americans.

"As America and the world watched in horror what was happening to us at the Capitol, we did not receive timely reinforcements and support we needed," he said. "In contrast, during the Black Lives Matter protest last year, U.S. Capitol Police had all the support we needed and more."

"Why the different response?"

Indeed, law enforcement agencies in dozens of cities last year showed overwhelming force toward BLM demonstrators. Many used chemical dispersants, rubber bullets and hand-to-hand combat with largely peaceful crowds and some unruly vandals and looters. By the end of 2020, police had made more than 14,000 arrests.

In January, as images and video emerged from the attacks on the Capitol, a racist and anti-Semitic element among the rioters became apparent. One man was pictured inside of the Capitol building carrying a Confederate battle flag.

And in the nearly seven months since the attacks, more video investigations revealed several rioters had flashed white supremacist gang signs and "white power" hand signals during the insurrection.

Gonell also called out the hypocrisy he perceived from many of the rioters who profess to support law enforcement — "the thin blue line" — but did not agree with those protesting over Floyd last summer.

"There are some who expressed outrage when someone simply kneeled for social justice during the national anthem," Gonell said. "Where are those same people expressing outrage to condemn the violent attack on law enforcement officers, the U.S. Capitol, and our American democracy?"

"I'm still waiting for that," he said.