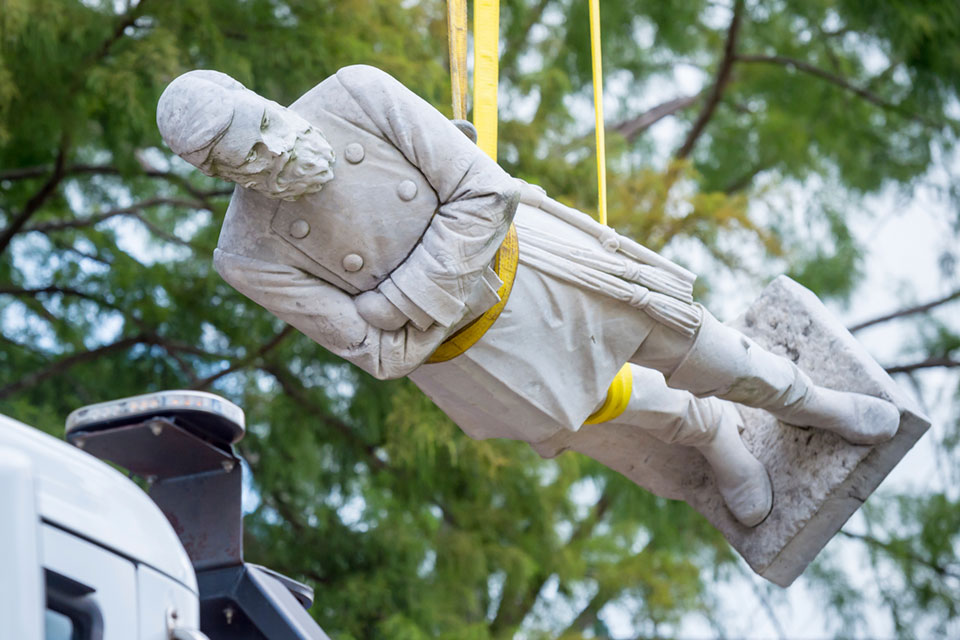 LAFAYETTE, La. (AP) — Spectators cheered Saturday as a stone statue of a Confederate general was hoisted by a crane and removed from a pedestal where it stood for 99 years in front of a city hall in south Louisiana.

The Advertiser posted video of the work that happened a day after United Daughters of the Confederacy signed a settlement agreeing to move the statue of Gen. Alfred Mouton or let the city do so. A trial had been scheduled for July 26.

"The Confederacy has surrendered,” attorney Jerome Moroux told The Advocate. Moroux represented the city and 16 city residents who wanted the statue gone.

The murder of George Floyd by Minneapolis police in 2020 prompted new calls across the country to remove Confederate statues, many of which had been erected decades after the Civil War, during the Jim Crow era, when states imposed new segregation laws, and during the “Lost Cause” movement, when historians and others inaccurately depicted the South’s rebellion as a fight to defend states’ rights, not slavery.

Mouton, whose full name was Jean-Jacques-Alfred-Alexandre Mouton, was a slave owner and son of a former Louisiana governor. He died leading a cavalry charge in the Civil War Battle of Mansfield.

“It’s been 99 years right now, and that’s way too long for that to have remained in place,”

Fred Prejean, president of Move the Mindset, a group created to pushed for the statue's removal, The Advertiser reported.

In 1980, outgoing Mayor Kenny Bowen wanted to move the statue to what was then the new Lafayette city hall. Although United Daughters of the Confederacy gave the statue to the city in 1922, the group fought the move, partly because Mouton's father once had owned the statue's site.

The group delayed the move until Dud Lastrapes took office, then got a permanent court order forbidding any move unless it was needed for road work or the land was sold, The Advertiser has reported.

Residents asked the city in 2016, during a national movement to remove Confederate statues, to get Mouton's away from City Hall. But, after the United Daughters threatened a lawsuit, the City-Parish Council backed down. 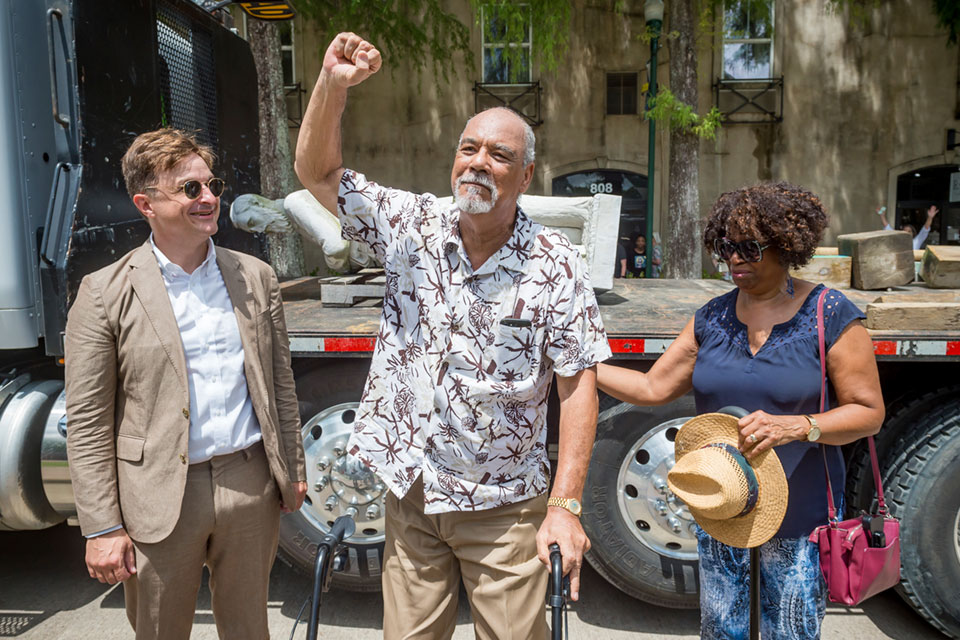 Attorney Jerome Mooroux with Fred and Ola Prejean react as the statue of Confederate Gen. Alfred Mouton is removed on Saturday, July 17, 2021 in Lafayette, La. The statue was moved from the front of city hall where it has stood for 99 years. (Scott Clause/The Daily Advertiser via AP)

That prompted the creation of Move the Mindset and other groups to raise awareness about the statue’s Jim Crow-era history, the treatment of Black people during that period and the negative implications of having a Confederate statue at an entrance to Lafayette's downtown.

Sixteen members of Move the Mindset filed papers in 2019 to intervene in the 1980 injunction, arguing that the group’s unconditional donation of the statue left it without any legal right to fight a move.

Mayor-President Josh Guillory asked lawyers to investigate options and in 2020 the City Council endorsed removal. The city joined Move the Mindset in the legal fight against the 1980 injunction.