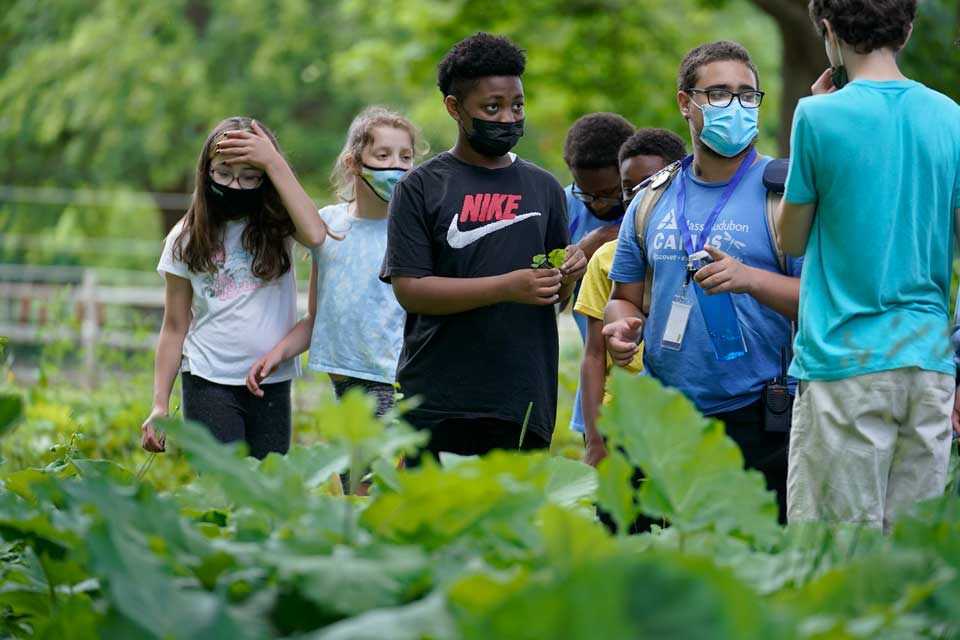 BOSTON (AP) — When Boston socialites Minna Hall and Harriet Hemenway sought to end the slaughter of birds in the name of 19th century high fashion, they picked a logical namesake for their cause: John James Audubon, a naturalist celebrated for his stunning watercolors of American birds. 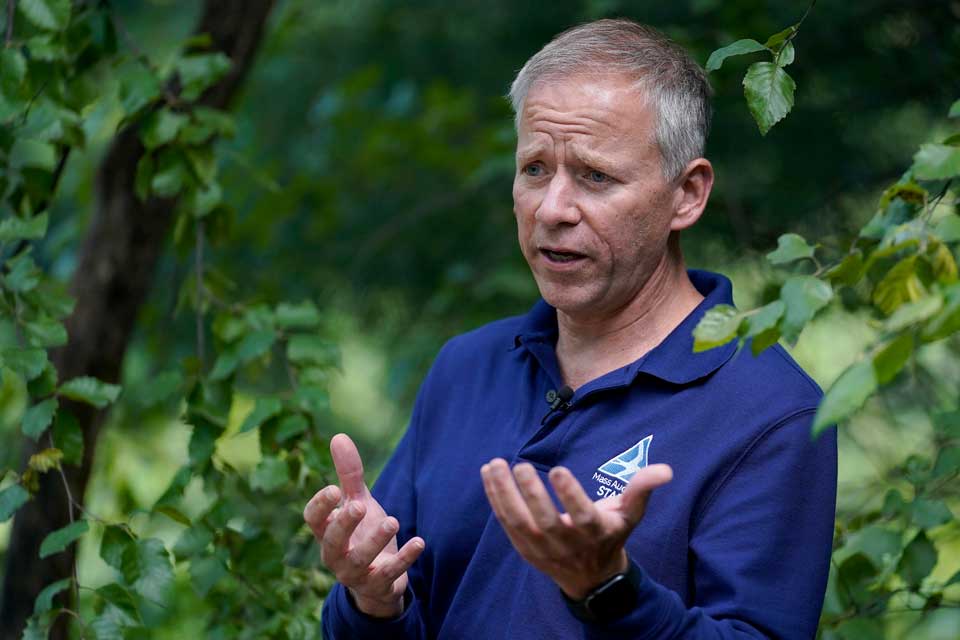 Mass Audubon President David O'Neill takes questions from an Associated Press reporter during an interview at Mass Audubon's Boston Nature Center and Wildlife Sanctuary, in the Mattapan neighborhood of Boston, Wednesday, June 23, 2021. (AP Photo/Steven Senne)Now, 125 years after the founding of the Massachusetts Audubon Society for the Protection of Birds, the organization and the nearly 500 Audubon chapters nationwide it helped inspire are reckoning with another side of Audubon’s life: He was also a slaveholder and staunch opponent of abolition.

In the year-plus since George Floyd was killed by Minneapolis police, Audubon chapters have pledged to do more to atone for the past, including diversifying their staff and finding ways to make natural spaces more welcoming to people of color. It’s part of a broader reckoning within the wider environmental movement, which for years has faced criticism for its racist origins and lack of diversity.

“At this point, if people are not part of what they’re trying to protect, that’s an issue,” said Debbie Njai, an Illinois resident who founded the outdoor group BlackPeopleWhoHike.

The Mass Audubon published an essay last fall acknowledging how Audubon’s family's wealth came in large part from running a Caribbean sugar plantation. It has also pledged to have people of color make up 25% of its board of directors, and hopes to open more wildlife sanctuaries in communities of color.

The National Audubon Society, which is based in New York and is separate from the Mass Audubon, has similarly delved into its namesake’s legacy in a series of essays.

And the Sierra Club publicly apologized last July for the racist views of its founder, John Muir, who openly dismissed American Indians as dirty savages. The Oakland-based group has also committed $5 million to boost its environmental justice work and recently voiced support for Black reparations.

Environmental groups understand the future of their movement hinges on changing their white, elitist reputation, said David O’Neill, president of the Mass Audubon.

“If we don’t get younger and we don’t get more diverse, we’re not going to have people to advocate on behalf of nature, and that’s not good for anyone,” he said during a recent visit to the group’s Boston Nature Center, an urban wildlife sanctuary in a majority Black neighborhood that it hopes to replicate in other Massachusetts communities of color.

Green organizations appear to be making progress on improving staff diversity, but their leadership remains predominantly white, said Andres Jimenez, head of Green 2.0, a Washington, D.C., group that puts out an annual report card on diversity in the environmental sector.

In its most recent report, Green 2.0 found that the nation’s largest green groups added, on average, six people of color to their staff, two to their senior management and one to their board of directors between 2017 and 2020.

“We need to see that change up top to move the ball in an accelerated way," Jimenez said.

Bird conservation brought the country’s latest racial reckoning to the environmental movement’s doorsteps, and, in many ways, it’s where the calls for change are most acutely felt. 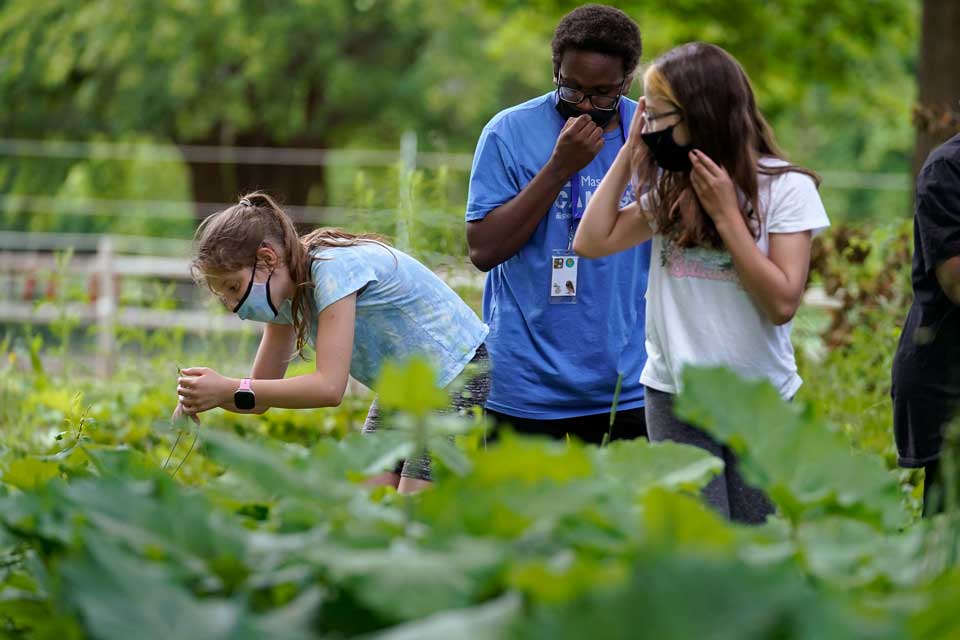 Jamil Boykin, center, camp educator at the Mass Audubon's Boston Nature Center and Wildlife Sanctuary, examines wild sorrel with students Nesha Moskowitz, left, and Lyla Mendoza, right, during a hike at the sanctuary, in the Mattapan neighborhood of Boston, Wednesday, June 23, 2021. Audubon Society chapters are grappling with how to address their namesake's legacy as the nation continues to reckon with its racist past. John James Audubon was a celebrated 19th century naturalist but also a slaveholder publicly opposed to abolition. (AP Photo/Steven Senne)There's a growing campaign, for example, to drop the eponyms of birds that honor slaveholders and white supremacists — Bird Names for Birds.

The catalyst was a dispute between a Black birdwatcher and a white woman with her dog in New York’s Central Park that went viral last summer, sparking #BlackBirdersWeek and other similar efforts to highlight Black nature enthusiasts and the discrimination and other challenges they face in the outdoors.

Christian Cooper, the birder at the center of that controversy, stressed organizations like the Audubon have been taking steps to address diversity long before his viral moment, even if some have yielded mixed results.

A board member with the New York City Audubon Society, Cooper said his chapter has been trying to draw more diverse members through modest events like last month's Juneteenth birdwatching and potluck picnic.

“The organizations that are having the most success are those that are trying new things,” Cooper said.

“The reality is that fixing centuries of ingrained racial bias as it manifests in the environmental movement is hard and uncomfortable work."

At the National Audubon Society, the racial reckoning has boiled over into staff unrest.

Spurred by complaints of a toxic workplace, an outside audit concluded in April that a “culture of retaliation, fear, and antagonism toward women and people of color" existed at the organization. Longtime CEO David Yarnold swiftly resigned.

Tykee James, who serves as the organization’s government affairs officer in Washington, is among the staffers pushing to form a labor union to address diversity and other workplace problems. He also wants the Audubon to be more vocal in publicly advocating for environmental justice causes.

Matt Smelser, a spokesperson for the Audubon Society, referred to a May statement from the group, which said “bullying and other bad behavior” won't be tolerated going forward. The organization also continues to search for a permanent CEO and has committed to remaining neutral in the unionization efforts, he added.

Back at the Mass Audubon, O’Neill says the organization’s board has added new members so that 17% of them are people of color. The staff of more than 950 is about 65% white.

Scott Edwards, an ornithologist at Harvard, said the jury’s still out on whether these early steps are enough. Some green groups will have to re-imagine their mission and pivot to more urban populations, he said.

“Organizations will have to think creatively about how to get communities of color more connected with nature,” said Edwards, who is Black.

“Show them that their voices are needed and wanted. Make them feel included in the larger effort of conservation.”

Mamie Parker, who worked for decades at the U.S. Fish and Wildlife Service and was its first Black regional director, advises environmental groups to approach racial equity like a conservation challenge.

“When you plant a tree to restore a forest or take care of bald eagles to rebuild their population,” the retired biologist from Dulles, Virginia, said, "it takes years before those efforts bear fruit.”