Have a Seat: Patio Furniture Shortage Tells US Economic Tale 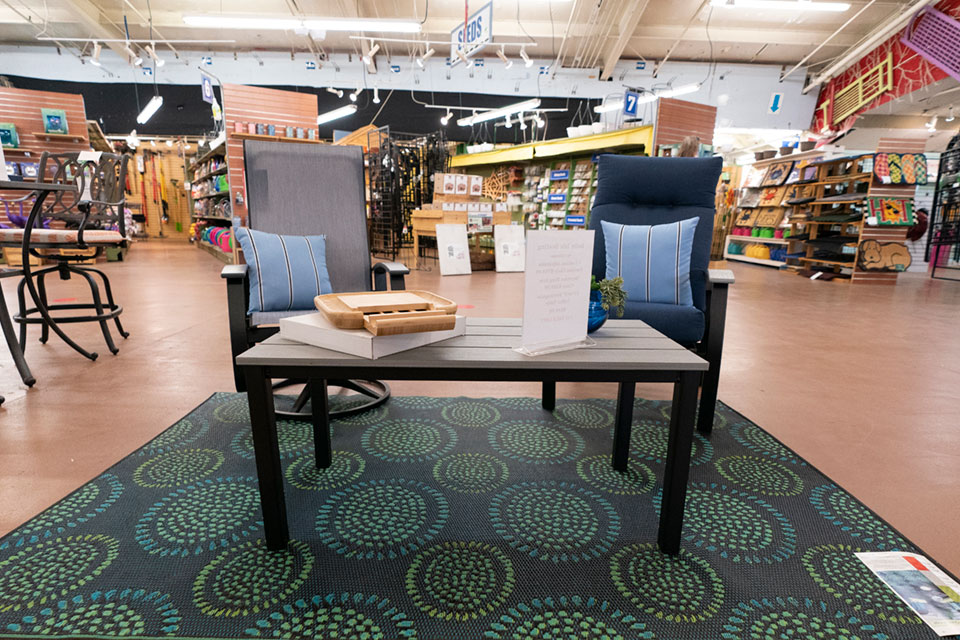 COCKEYSVILLE, Maryland (AP) — People used to go to Valley View Farms to buy five tomato plants and end up with $5,000 in patio furniture.

This year is different. After a record burst of sales in March, the showroom floor is almost empty of outdoor chairs, tables and chaises for people to buy.

The garden supply store in suburban Baltimore has been waiting six months for a shipping container from Vietnam full of $100,000 worth of wicker and aluminum furniture. Half of the container has already been sold by showing customers photographs. The container should have arrived in February, but it reached U.S. waters on June 3 and has just docked in Long Beach, California.

“Everyone is just so far behind,” said John Hessler, 62, the patio section manager. “I’ve never seen anything like it.” 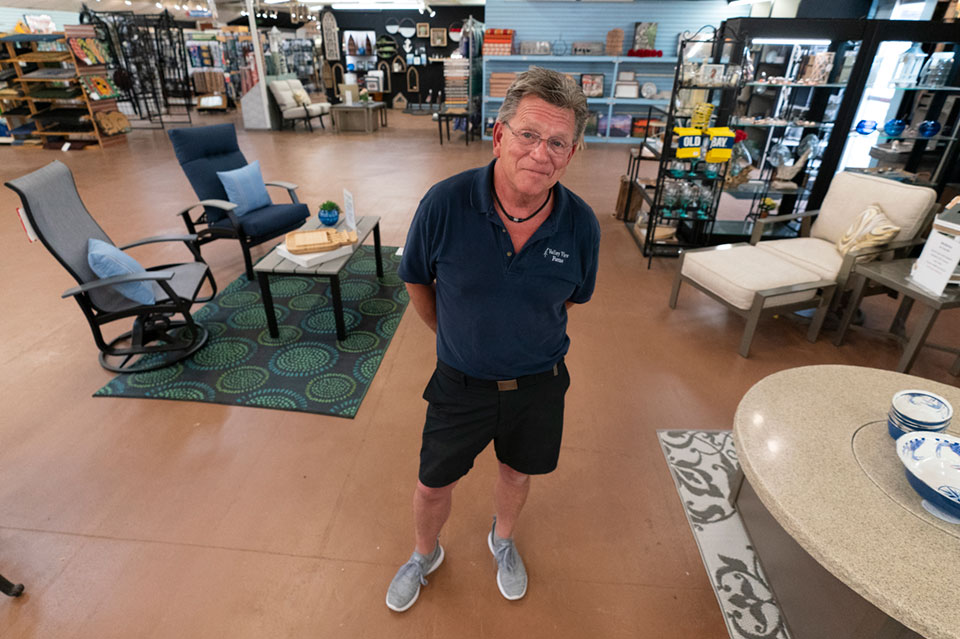 In this July 6, 2021, photo John Hessler, 62, the patio section manager at Valley View Farms in Cockeysville, Md., poses for The Associated Press in his showroom. (AP Photo/Julio Cortez)

An economy that's too strong?

The Biden economy faces the unusual challenge of possibly being too strong for its own good.

There is the paradox of the fastest growth in generations at more than 6% yet also persistent delays for anyone trying to buy furniture, autos and a wide mix of other goods. It’s almost the mirror opposite of the recovery from the Great Recession of 2007-2009, which was marred by slow growth but also the near-instant delivery of almost every imaginable product.

What ultimately matters is that demand stay strong enough for companies to catch up and shorten the long waits.

“This is a very good problem for the economy to have,”

said Gus Faucher, chief economist for PNC Financial Services. "You’re much better off having too much demand than too little, because too little demand is the recipe for an extended recession.”

Republicans have held out the shortages and price increases as a sign of economic weakness, while Biden can counter that wages are climbing at a speed that helps the middle and working classes. But the real challenge goes far beyond the blunt talking points of politicians to an economy being steered by a mix of market forces, tensions with China, setbacks from natural disasters and the unique nature of restarting an economy after a pandemic.

As America hurtles out of the July 4th weekend into the heart of summer, the outdoor furniture industry provides a snapshot of the dilemmas confronting the economy. A series of shortages has left warehouses depleted and prices rising at more than 11% annually as Americans resume BBQs and parties after more than a year of isolation. The industry cannot find workers, truckers and raw materials — a consequence of not just government spending but crowded ports, an explosion at an Ohio chemical plant and the devastating snowstorm that hit Texas in February.

Patio furniture makers interviewed by The Associated Press say they expect the supply squeeze to end in 2022 or 2023 — meaning it could remain a political flashpoint even if the broader risk of inflation fades as expected by many Federal Reserve officials and Wall Street analysts. The shortages reflect both the stranded shipping containers, a dearth of truckers and the compounded effect of a fatal explosion in April at the Yenkin-Majestic Paints and OPC polymer plant in Columbus, Ohio that depleted the domestic supply of furniture pieces. 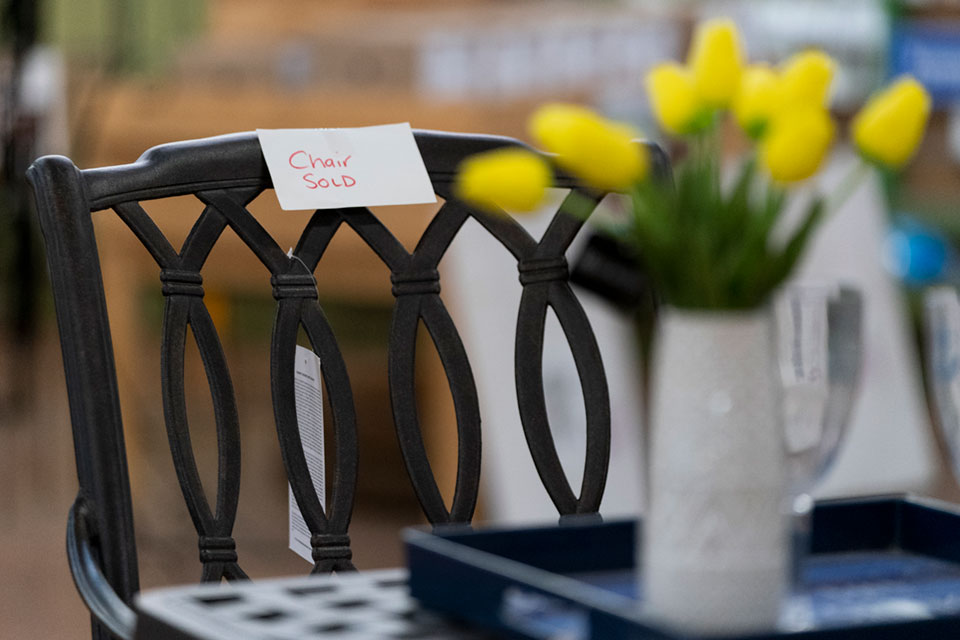 In this July 6, 2021, photo a sign is seen on a sold patio furniture floor model at Valley View Farms in Cockeysville, Md. The garden supply store in suburban Baltimore has been waiting six months for a shipping container from Vietnam full of $100,000 worth of wicker and aluminum furniture. Half of the container has already been sold by showing customers photographs. The container should have arrived in February, but it reached U.S. waters on June 3 and has just docked in Long Beach, Calif. (AP Photo/Julio Cortez)

The Biden administration, well aware aware of the challenge, has made fixing supply chains a priority. It's also trying to direct more money to making the U.S. power grid and other infrastructure more resilient against extreme weather events as part of a bipartisan deal reached with Senate Republicans.

“You saw what happened in Texas this winter: The entire system in the state collapsed,” Biden said in a recent Wisconsin speech. “That’s why we have to act.”

Administration officials expect the supply chain issues to self-correct, though they’re cautious about asserting a specific timeframe because of the unprecedented nature of the recovery from the pandemic.

They noted that a shortage of toilet paper when the pandemic started was fixed within weeks because factories could ramp up production. But in this case, Biden’s White House views the problem in global terms, with many of the challenges being in Asian ports, rather than a problem that is solely domestic in nature.

Republican lawmakers have placed the blame exclusively on Biden’s $1.9 trillion coronavirus rescue package, saying the shortages are causing inflation that behaves like a tax by eating into workers’ salaries and savings. Outdoor furniture companies do say that finding workers has become more of a challenge in part because of the greater unemployment benefits, but they don't buy fully into the Republican line that government dollars have caused a lasting price bump.

“The Biden inflation agenda of too much money chasing too few goods is causing major harm to hard-working families,” House Republican Whip Steve Scalise of Louisiana said at a June hearing.

The reality is not so simple for William Bew White III, who founded Summer Classics, an Alabama-based furnisher whose outdoor products look like they belong next to a Gilded Age mansion or terraced hotel along the Italian Riviera. He summarizes his problems as the three F’s: foam, fabric and freight.

“The freeze in Texas closed down two of the plants that make the chemicals that make foam,” he said. “These plants were not able to reopen until mid to late March. And supply dried up. I’m not sure how someone that’s in the upholstery business makes it on 40% to 60% of the needed products.”

His company can produce as many as 3,500 outdoor cushions a day, but for most of the year he was not getting the supplies he needed largely because of snow shutting down the Texas power grid. He's having revenue growth of between 40% and 60% on an annual basis and it's hard to judge how much to increase production to meet that demand and whether that demand can last.

He is more concerned with what his Chinese furniture suppliers are charging than prices at home. His prices in China have jumped as much as 26.5% since January, sometimes retroactively on orders that were already in shipping containers.

“This is not sustainable,” White said.

In many cases, companies are simply trying to absorb the higher costs. Erik Mueller, CEO of the Cincinnati-based outdoor furniture and home recreation chain Watson's, said he wants to protect his store's reputation as providing value. He doesn't see the situation as paralleling the 1970s mix of stagnation and inflation that helped to drive Jimmy Carter out of the presidency after one term.

“This isn’t the 70s,” he said. “We still have goods that are reasonably priced.”

While he believes that generous unemployment benefits have stunted hiring because people can earn more by not working, Mueller also sees the inflation as a spillover from the pandemic. Some people could not work because of the disease or their shifts were cut. The rush for supplies as economies reopened occurred too fast for factories and shipping firms not yet able to return to their previous capacity. All of that was coupled with a United States that after a brutal year simply welcomed the relief of lounging by the pool with friends.

The problem is one of market forces that are beyond anyone individual's authority, even the U.S. president's.

“You have just this exorbitant amount of demand due to a unique situation that was out of everyone’s control,” Mueller said.