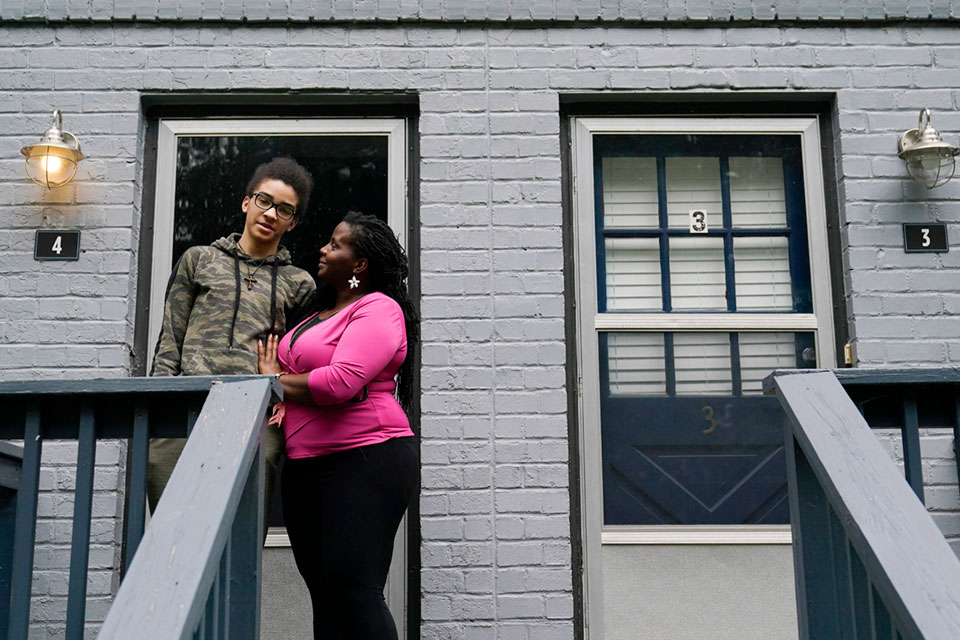 By SARAH KLEINER and TAYLOR JOHNSTON of the Center for Public Integrity and MICHAEL CASEY of The Associated Press
Published: 29 June 2021

Before the pandemic hit, Jacqueline Bartley, a mother of two girls and a boy, had a comfortable life. Then the 41-year-old lost her job at American Airlines, quickly spent her savings and found herself months behind on the $1,350-a-month home she rented. Until then she had never missed a rent payment.

Bartley, of Durham, North Carolina, turned to the state's rental assistance program and was relieved in January to be awarded $8,100. But she says her landlord refused the money after she rejected his request to amend her two-year lease to a shorter period. The program required landlords to honor leases, among other conditions, to get the money.

She turned to a second program launched this month by the state and again was approved. Last week, she learned her landlord had accepted nearly $20,000 for back rent and three months of future payments, and agreed to dismiss his eviction lawsuit.

The news means she won't be forced from her home after the federal eviction moratorium ends July 31. But the waiting and uncertainty meant months of stress.

“It’s been crazy especially when you have children in school,” Bartley said. “It’s pretty much been going by a whim. OK, am I going to have somewhere to go each month?”

Millions have found themselves in situations similar to Bartley's, facing possible eviction despite bold promises by governors to help renters after Congress passed the sweeping CARES Act in March 2020.

Nationwide, state leaders set aside at least $2.6 billion from the CARES Act’s Coronavirus Relief Fund to prop up struggling renters, but a year later more than $425 million of that — or 16% — hadn't made it into the pockets of tenants or their landlords, according to an investigation by the Center for Public Integrity and The Associated Press.

"That’s a huge amount of money not to be disbursed in a timely manner.”

But it took months to get up and running and stopped accepting applications just weeks after it finally opened in October due to overwhelming demand. The 20 nonprofits designated to distribute the money often lacked the capacity to get it out quickly.

Then, faced with the Republican-controlled Legislature's takeover of CARES Act spending in January, the state had less money to award applicants. It eventually spent $133 million of a promised $167 million — far short of what some housing advocates say is needed.

“We knew the money would not be enough. There were too many people who needed rental assistance,” said Pamela Atwood, director of housing policy at the North Carolina Housing Coalition.

“There was a lot of poor execution in rolling out that first program and it caused a lot of inefficiency.”

Tens of billions of dollars more in rental assistance have been delivered to states from the federal government in 2021, but that has been slow to be disbursed, too.

With the first round of funds in 2020, bureaucracy was not the only problem. Politics also played a role, with a handful of states, many led by Republicans and with a history of weak tenant protections, offering little to no assistance.

Then, there was the often onerous application process and an end-of-the-year federal deadline for spending the money, extended so late that some states had already pulled funding to use on other expenses. Some landlords refused to participate over restrictions that meant they could not evict a tenant who fell behind again after the assistance. Tenants sometimes short-changed themselves by filing incomplete applications.

Congress' sweeping 2020 CARES Act sent billions of dollars to states and some local governments. But it didn’t mandate that any money be spent on rental assistance, leaving it to states to create their own programs and set the rules.

According to the National Low Income Housing Coalition’s database of rent relief programs in 2020, Georgia, West Virginia and Tennessee, all run by Republican governors, chose not to set up statewide rent-relief programs that year, despite having higher than average historic eviction rates. South Carolina allocated less than $14 per renter-occupied household.

Still, many states did scramble into action, creating massive programs to keep families in their homes — the safest place to shelter during the coronavirus pandemic. By the summer of 2020, state and local government officials launched about 530 rental assistance programs, setting aside at least $4.3 billion from various sources.

Several states were praised for programs that ran well. Illinois, Indiana, Oregon and Washington state were among more than a dozen that reported distributing every dollar of the rental assistance set aside from the Coronavirus Relief Fund by March 31.

The Center for Public Integrity surveyed about 70 state and local agencies that the National Low Income Housing Coalition identified as having set aside Coronavirus Relief Fund money for rent help in 2020. About $1 out of every $6 of that $2.6 billion wound up getting spent on other COVID-19-related expenses, such as protective equipment, police officers' salaries and small-business loans.

Some states also spent millions of dollars setting up their programs, including North Carolina, which allocated around $20 million on administrative costs, and Hawaii, which spent $8 million. In the case of Hawaii, much of that went to help nonprofits scale up and rent space. The state also spent money on a software system in an effort to prevent fraud.

“The previous funds, the vast majority of them, were very flexible and had a broad set of allowable uses," of which eviction prevention was just one, said Yentel, whose group has been tracking rental assistance programs.

“Some states and cities carved out some of those funds for eviction prevention and to create emergency rental assistance programs," she said. "But many didn’t or many didn’t set aside enough.”

Among the biggest challenges was states' failure to spend what they had allocated.

New York's 2020 rent-relief program “was set up to fail,” said Ellen Davidson, a staff attorney at Legal Aid Society in New York. “It was a program that really punished people. There was a real intention to make sure people didn’t do better in being hurt by COVID, so if they were struggling before, they should be struggling after.”

Tenants had to prove they were “rent-burdened” before the pandemic to qualify for rent relief in 2020, though eventually that stipulation was removed.

Hawaii spent around $71 million of the $100 million initially promised, though an analysis by the Hawaii Appleseed Center for Law and Economic Justice found the state spent the most per capita, at $44.50. Still, the Legislature set a late December deadline for the spending, which meant the remaining $29 million had to be redirected to the state’s unemployment insurance trust fund.

“It would have been better to base the ending of the program on the CARES Act spending deadline with whatever extensions were enacted, because ultimately the deadline was extended,” said Gavin Thornton, the center’s executive director. “If that had been done, the program would have continued, and landlords and tenants would have been able to continue to access those funds, which were certainly needed.”

Smaller cities and counties were affected too. In Marion County, Florida, none of the $1 million set aside for renters from the Coronavirus Relief Fund ever made it to people who needed it because the United Way of Marion County, which administered the funds, didn’t have enough workers to process applications, said Scot Quintel, the organization’s president. The United Way was able to distribute rent assistance from another source, but the Coronavirus Relief Fund money went back to the city for other COVID-19-related expenses.

“It’s just horrifying how ill-prepared some states were,”

said Alexander, of the Eviction Lab. “Some places made it work and some places didn’t, which demonstrates that the places that didn’t probably could have.”

Rental assistance was not always enough

In Athens, Georgia, Dylyn Price said she got about $5,800 in rental assistance but that may not prevent her from losing her home. After her pay and hours at a fast food restaurant were cut, eviction notices started arriving in early 2020. They haven’t let up.

Price received rental assistance from the Ark, a nonprofit administering funds from the CARES Act on behalf of the city of Athens, but the assistance ended earlier this year. Price’s landlord has refused to renew her lease, which is expected to expire Wednesday.

She fears having to live, once again, in a homeless shelter with her 14-year-old son.

“It’s a very nauseating and uncomfortable situation to be in”