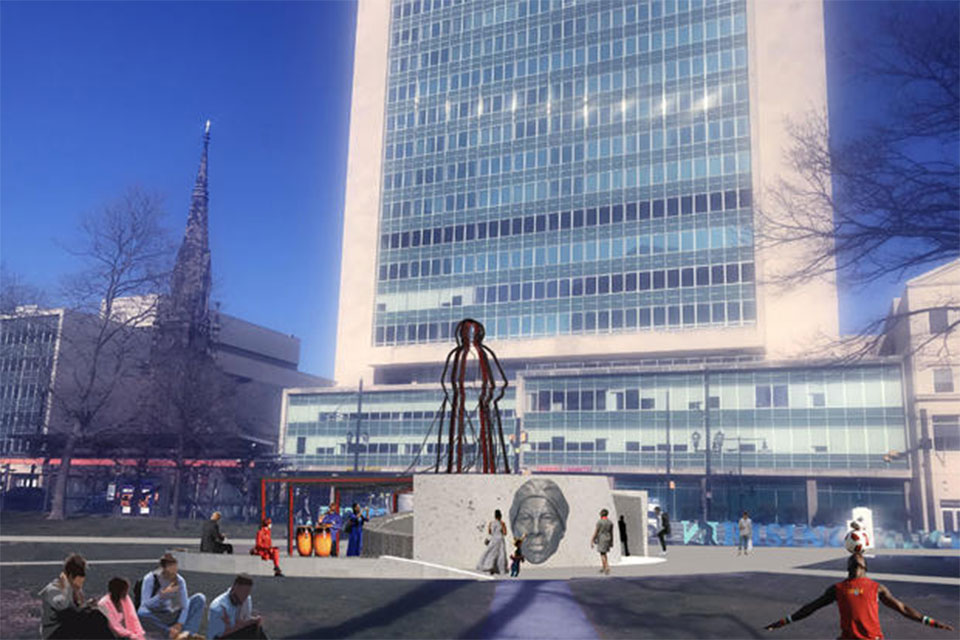 A Harriet Tubman monument is set to replace a Christopher Columbus statue in Newark in what the mayor is calling, “poetic,” CBS News reports.

A year ago, protests broke out around the nation, spurred by the murder of George Floyd. Organizers fought ardently against racial injustice and police brutality across the country, prompting several conversations about the treatment of people of color and demands to remove statues that pay homage to a racist history. Since then, Mayor Ras Baraka has revved up efforts to bring swift change to Newark, launching a guaranteed basic income program, reforming the city police who didn’t fire a single shot on duty in 2020, and paying homage to the memory of Floyd with a 700-pound bronze statue in front of city hall.

The city also removed a Christopher Columbus statue from Washington Park. Now, that statue will be replaced with a monument to Harriet Tubman. The effort pays homage to Tubman’s history and roots in Newark. Baraka called the moment, “poetic.”

“I think it’s a little better than what we envisioned. I think that it’s going to turn out to be something great...Harriet Tubman actually stepped foot here in this property, Christopher Columbus did not. So, it seems more appropriate to have a statue of Harriet Tubman and talk about the abolitionists’ work that went on that most people in New Jersey don’t even know...fighting against a system that was trying to allow slavery in this state,” said Baraka.

In 1804, New Jersey passed a law that would slowly abolish slavery, the state eventually becoming the last in the North to fully abolish it, the last of the enslaved not becoming free until after the 13 amendment was ratified in 1865. Under Tubman’s leadership on the Underground Railroad, she traveled through Newark, the city being a last stop on the Railroad before New York.

Shadow of a Face

A contest was created in the city to choose an artist to design the monument, the months long search ending with Nina Cooke John. The artwork, entitled “Shadow of a Face,” is a circular ceramic-based mosaic of Tubman’s face featuring text detailing the history of the Underground Railroad and safe houses in New Jersey.

“As a woman, a Black woman, and mother of three girls, I am delighted to bring my memorial for Harriet Tubman to life in Newark. My design creates a welcoming space for people to connect with Tubman as well as interact and reflect on their own liberation from whatever weight they might be carrying." John said.

Baraka says that the changes are just the beginning of necessary steps the city plans to take in the fight for progress, admitting that there’s still a lot of work to be done.

“We obviously have to deal with housing inequity, the wealth gap, access to education and opportunity. We have to do things in that area, and still significant police reform, statewide police reform, local police reform, we still are struggling around those issues. The work doesn’t stop, right? People tend to look at these things as the ceiling, so they get upset. But it’s just the floor. And it’s just laying the groundwork for something bigger that other people have to come behind and do,” Baraka said.

The Harriet Tubman monument will debut in Washington Park in the summer of 2022.