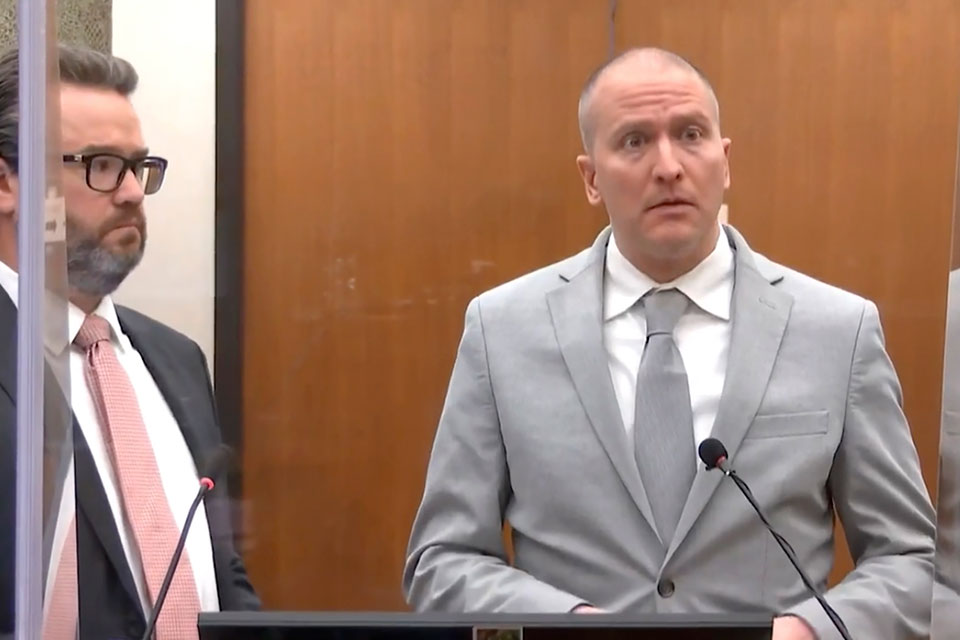 MINNEAPOLIS (AP) — Former Minneapolis police Officer Derek Chauvin was sentenced to 22 1/2 years in prison for the murder of George Floyd, whose dying gasps under Chauvin’s knee led to the biggest outcry against racial injustice in the U.S. in generations.

The punishment — which fell short of the 30 years prosecutors had requested — came after Chauvin broke his more than yearlong silence in court to offer condolences to the Floyd family. He also said more information will be coming out and he hopes the family will eventually have “some peace of mind.”

With good behavior, Chauvin, 45, could get out on parole after serving two-thirds of his sentence, or about 15 years. 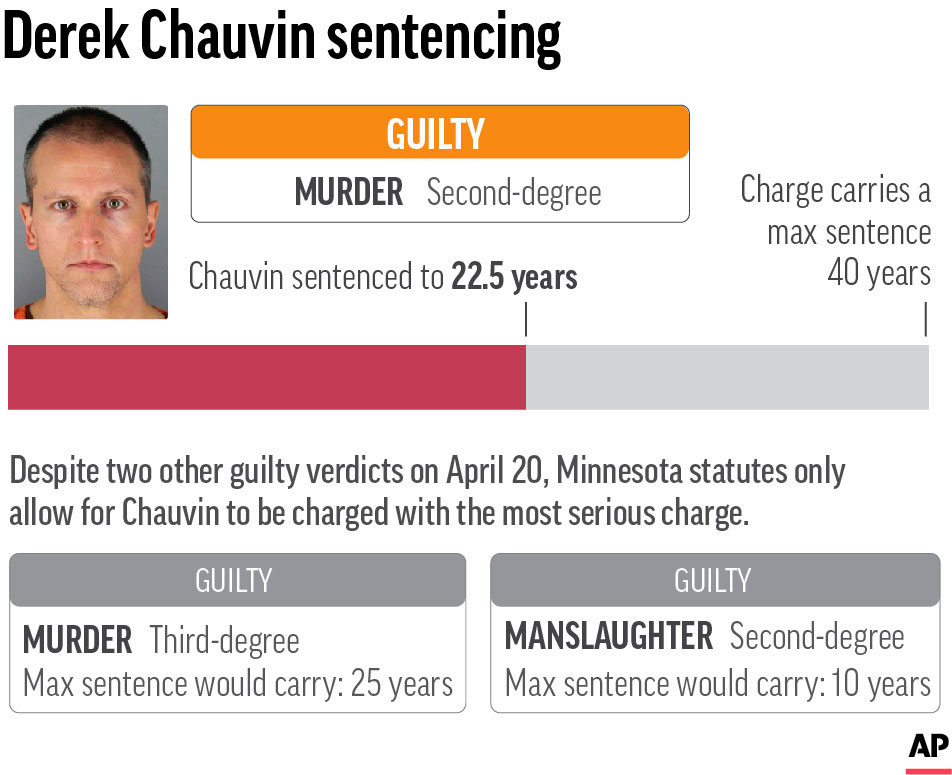 Graphic shows the charges, verdict and sentencing in the Derek Chauvin murder trial. Chauvin was found guilty on all charges in the murder of George FloydOutside the courthouse, a crowd of about 50 people clasped hands or placed them on each other’s shoulders. The reaction was subdued as people debated whether the sentence was long enough. Some cursed in disgust.

Jennifer Starr Dodd, 37, streamed the proceedings from her phone as a large group of people watched over her shoulder at George Floyd Square, as the intersection where Floyd was pinned to the pavement is now known. Members of the crowd broke into applause, and several said,

Starr Dodd was grateful the sentence was not the “slap on the wrist” she feared.

In imposing the punishment, Judge Peter Cahill went beyond the 12 1/2-year sentence prescribed under state guidelines, citing “your abuse of a position of trust and authority and also the particular cruelty” shown to Floyd. 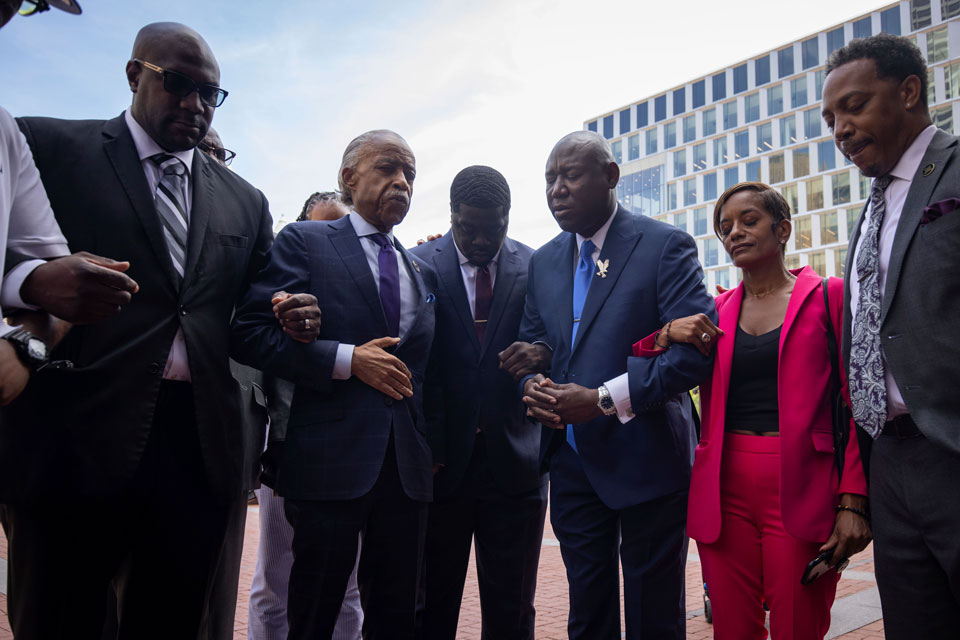 Reverend Al Sharpton and Attorney Ben Crump hold a prayer with members of George Floyd's family outside of the Hennepin County Government Center for the sentencing of former police officer Derek Chauvin on Friday, June 25, 2021 in Minneapolis. Chauvin is set to learn his fate as a Minnesota judge sentences him for murder in the death of George Floyd. (AP Photo/Christian Monterrosa)Floyd family attorney Ben Crump said the family had gotten “some measure of accountability” but is hoping Chauvin gets the maximum at his upcoming federal civil rights trial. Crump said this was the longest sentence a police officer has ever received in Minnesota.

“Real justice would simply be that George Floyd would be here with his family,” Crump said. “We have to remember, real justice in America will be Black men and Black women and people of color who will not have to fear being killed by the police just because the color of their skin. That would be real justice.”

Chauvin was immediately led back to prison. As with the verdicts in April, he showed little emotion when the judge pronounced the sentence. His eyes moved rapidly around the courtroom, his COVID-19 mask obscuring much of his face.

The fired white officer was convicted of second-degree unintentional murder, third-degree murder and second-degree manslaughter for pressing his knee against Floyd’s neck for up to 9 1/2 minutes as the 46-year-old Black man gasped that he couldn’t breathe and went limp on May 25, 2020.

Bystander video of Floyd’s arrest on suspicion of passing a counterfeit $20 bill at a corner store prompted protests around the world and led to scattered violence in Minneapolis and beyond, as well as demands for overhauling policing and discipline.

On Friday, Chauvin, who did not testify at his trial, removed his mask and turned toward the Floyd family, speaking only briefly because of he called “some additional legal matters at hand” — an apparent reference to the federal civil rights trial, where his words could be used against him.

“I do want to give my condolences to the Floyd family. There’s going to be some other information in the future that would be of interest.

"And I hope things will give you some some peace of mind,” he said, without further explanation.

Defense attorney Eric Nelson asked that Chauvin be let off on probation, saying the former officer's “brain is littered with what-ifs” from that day: “What if I just did not agree to go in that day? What if things had gone differently? What if I never responded to that call? What if? What if? What if?”

Chauvin’s mother, Carolyn Pawlenty, pleaded for mercy for her son, saying his reputation has been unfairly reduced to that of “an aggressive, heartless and uncaring person” and a racist.

“I want this court to know that none of these things are true and that my son is a good man,” she told the judge, adding: “Derek, I want you to know I have always believed in your innocence, and I will never waver from that.”

“I will be here for you when you come home,” she said. 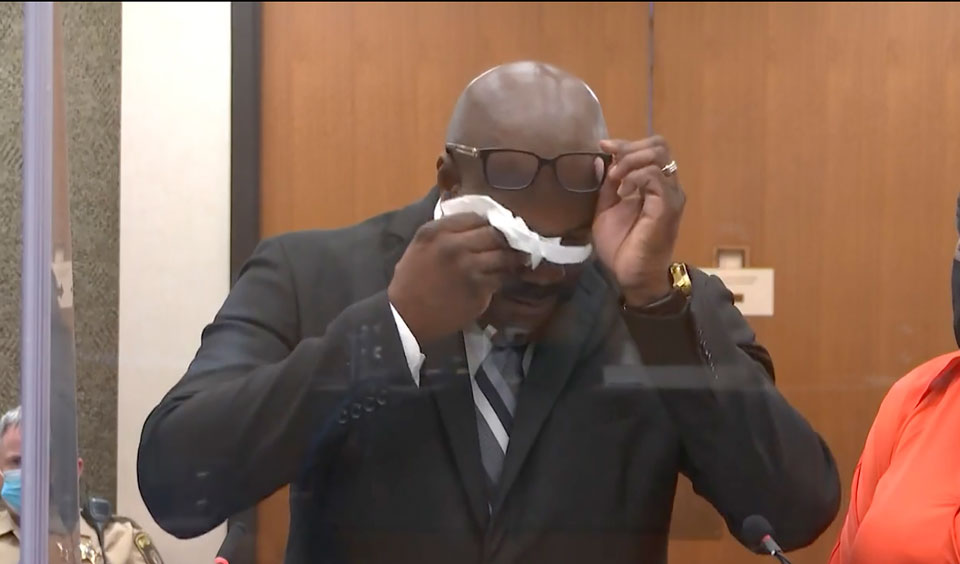 In this image taken from video, Philonise Floyd, brother of George Floyd, becomes emotional during victim impact statements as Hennepin County Judge Peter Cahill presides over sentencing, Friday, June 25, 2021, at the Hennepin County Courthouse in Minneapolis, in the trial of former Minneapolis police officer Derek Chauvin, who was convicted in the May 25, 2020, death of George Floyd. (Court TV via AP, Pool)Floyd's family members also addressed the court before sentencing, expressing sorrow over his death and asking for the maximum penalty, which was 40 years.

“We don’t want to see no more slaps on the wrist.

"We’ve been through that already," said a tearful Terrence Floyd, one of Floyd's brothers.

Floyd's nephew Brandon Williams said: “Our family is forever broken.” And Floyd's 7-year-old daughter, Gianna, in a video played in court, said that if she could say something to her father now, it would be: “I miss you and and I love you.”

Prosecutor Matthew Frank, in asking the judge to exceed the sentencing guidelines, said “tortured is the right word” for what the officer did to Floyd.

“This is not a momentary gunshot, punch to the face. This is 9½ minutes of cruelty to a man who was helpless and just begging for his life," Frank said.

The concrete barricades, razor wire and National Guard patrols at the courthouse during Chauvin's three-week trial in the spring were gone Friday, reflecting an easing of tensions since the verdict in April. 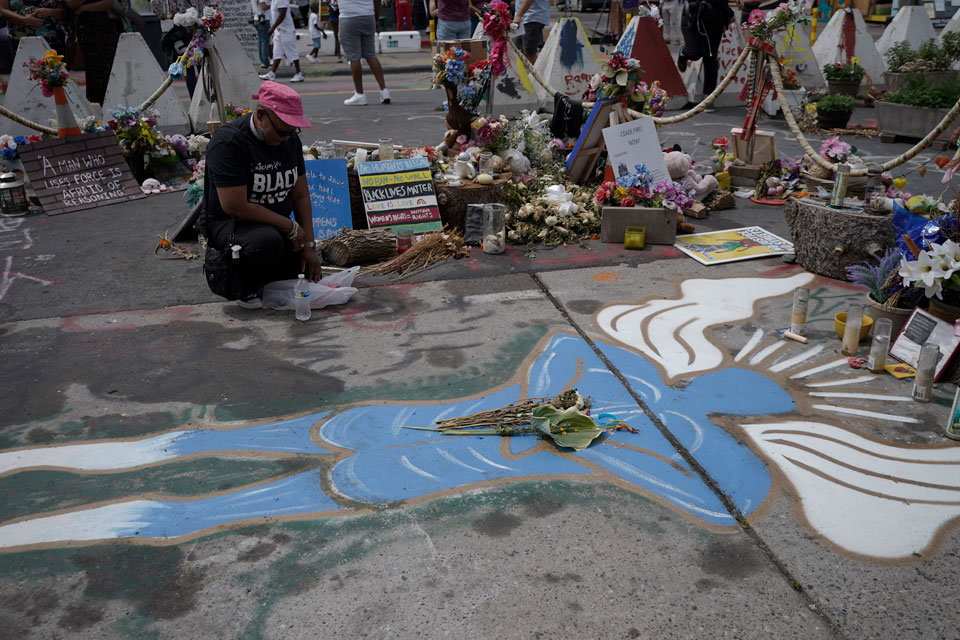 A person kneels at the spot where George Floyd was killed, as people gather during the sentencing hearing of former Minneapolis police officer Derek Chauvin for Floyd's murder, Friday, June 25, 2021, in Minneapolis. Chauvin faces decades in prison when he is sentenced Friday following his murder and manslaughter convictions in the death of George Floyd. (AP Photo/Julio Cortez)Before the sentencing, the judge denied Chauvin’s request for a new trial. The defense had argued that the intense publicity tainted the jury pool and that the trial should have been moved away from Minneapolis.

The judge also rejected a defense request for a hearing into possible juror misconduct. Nelson had accused a juror of not being candid during jury selection because he didn’t mention his participation in a march last summer to honor the Rev. Martin Luther King Jr. Prosecutors countered the juror had been open about his views.

Philip Stinson, a criminal justice professor at Bowling Green State University, said 11 non-federal law officers, including Chauvin, have been convicted of murder for on-duty deaths since 2005. The penalties for the nine who were sentenced before Chauvin ranged from from six years, nine months, to life behind bars, with the median being 15 years.

With Chauvin’s sentencing, the Floyd family and Black America witnessed something of a rarity: In the small number of instances in which officers accused of brutality or other misconduct against Black people have gone to trial, the list of acquittals and mistrials is longer than the list of sentencings after conviction.

In recent years, the acquittals have included officers tried in the deaths of Philando Castile in suburban Minneapolis and Terence Crutcher in Tulsa, Oklahoma. Two mistrials were declared over the death of Samuel Dubose in Cincinnati.

“That’s why the world has watched this trial, because it is a rare occurrence,” said Arizona-based civil rights attorney Benjamin Taylor, who has represented victims of police brutality. “Everybody knows that this doesn’t happen every day.”

Chauvin has been held since his conviction at the state's maximum-security prison in Oak Park Heights, where he has been kept in a cell by himself for his own protection, his meals brought to him.

The three other officers involved in Floyd's arrest are scheduled for trial in March on state charges of aiding and abetting both murder and manslaughter. They will also stand trial with Floyd on the federal charges. No date has been set for that trial.