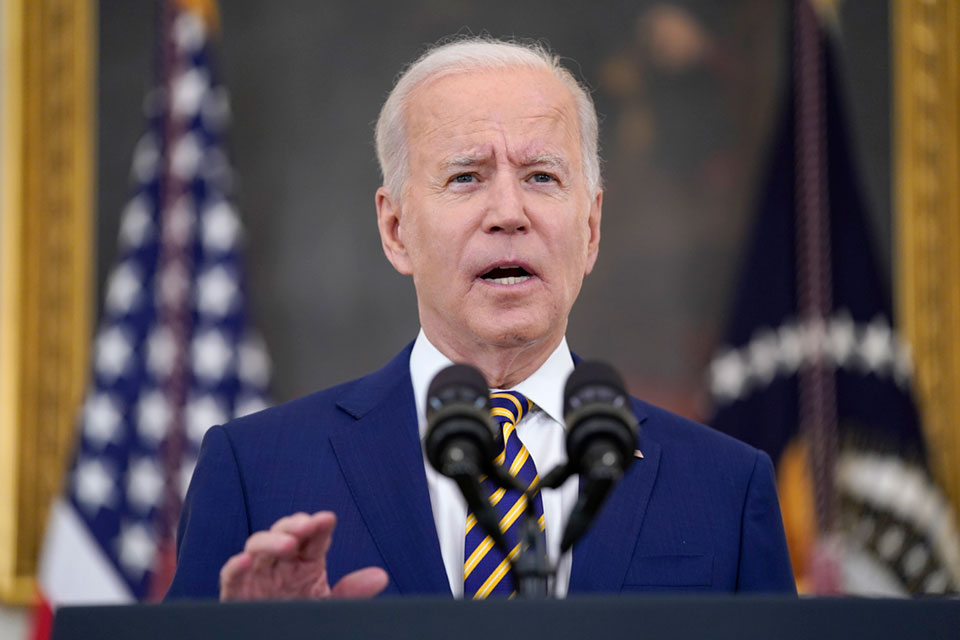 WASHINGTON (AP) — The U.S. government is stepping up efforts to get younger Americans vaccinated for COVID-19 as the White House acknowledges it will miss two key vaccination benchmarks and as concern grows about the spread of a new variant that threatens to set the country back in the months ahead.

The delta variant, first identified in India, in the last two weeks has come to represent more than 20% of coronavirus infections in the U.S., the Centers for Disease Control and Prevention reported Tuesday. That's double what it was when the CDC last reported on the variant’s prevalence.

“The delta variant is currently the greatest threat in the U.S. to our attempt to eliminate COVID-19,” Dr. Anthony Fauci, the nation’s top infectious disease expert, said at a White House briefing on the virus.

“Good news: Our vaccines are effective against the delta variant.”

He added: “We have the tools. So let’s use them, and crush the outbreak.”

The White House on Tuesday acknowledged that President Joe Biden will fall short of reaching his goal of vaccinating 70% of all American adults with at least one shot by Independence Day. But it tried to paint an optimistic picture nonetheless by stressing that the nation had reached that threshold for those aged 30 and older and expects to meet it for those age 27 or older by the July 4 holiday.

White House press secretary Jen Psaki rejected the idea that the missed July 4 benchmarks would represent a failure for the administration, telling reporters, “We don’t see it exactly like something went wrong."

Still, administration officials said they were redoubling their focus on vaccinating younger Americans age 18-26, who have proved to be least likely to get a vaccine when it’s available for them.

The nationwide rate of new vaccinations has dropped off precipitously over the past month even as shots have become more available, with fewer than 300,000 Americans now getting their first dose per day on average — a pace that, if sustained, will have the U.S. not reaching Biden's 70% goal until late July at the earliest.

Officials are also increasingly concerned about regional variations in the vaccination program.

More than 16 states and the District of Columbia have vaccinated 70% of their adult population. But others — particularly in the South and Midwest — are lagging substantially behind, with four not having yet reached 50% vaccination rates.

Younger Anericans think they're not at risk

The White House said meeting Biden's vaccination goals is less important than the pace of the nation's reopening, which is exceeding even its own internal projections as the overwhelming majority of the nation's most vulnerable people are fully vaccinated and cases and deaths are at their lowest rates since the earliest days of the pandemic, averaging about 11,000 new infections and fewer than 300 deaths per day. More states are opening back up, with Michigan on Tuesday becoming the latest to do away with a mask mandate and virus restrictions. The state had the nation’s worst outbreak this spring.

“We have succeeded beyond our highest expectations,” Zeints said.

Americans at highest risk for complications from COVID-19 are overwhelmingly vaccinated, according to CDC data, but only 53% aged 25-39 have received one dose. Among those 18-24, it's 47%.

“Where the country has more work to do is particularly with 18 to 26 year olds,”

Zients and government experts said the rise of the delta variant should motivate younger Americans to get vaccinated.

“The reality is many younger Americans have felt like COVID-19 is not something that impacts them, and they’ve been less eager to get the shot,” Zients said. “However, with the delta variant now spreading across the country, and infecting younger people worldwide, it’s more important than ever that they get vaccinated.”

The variant is taking root as there are warning signs about a possible surge in cases in unvaccinated corners of America. Rural sections of Missouri, including Springfield and Branson, have seen a dramatic spike in COVID-19 hospitalizations in recent weeks that health officials attribute in part to the delta variant spreading among younger, unvaccinated residents.

“There is a danger, a real danger that if there is a persistence of a recalcitrance to getting vaccinated that you could see localized surges,” said Fauci.

Mississippi, Louisiana, Wyoming, Alabama and Idaho are all below 40% of their population with at least one dose of vaccine.

The White House planned to focus on increasingly local vaccination pushes, with first lady Jill Biden traveling Tuesday to Mississippi and Tennessee to promote vaccinations and Biden himself set to visit North Carolina on Thursday.

The variant is accounting for half of new infections in the regions that include Iowa, Kansas, Missouri, Nebraska, Colorado, Montana, North Dakota, South Dakota, Utah and Wyoming.