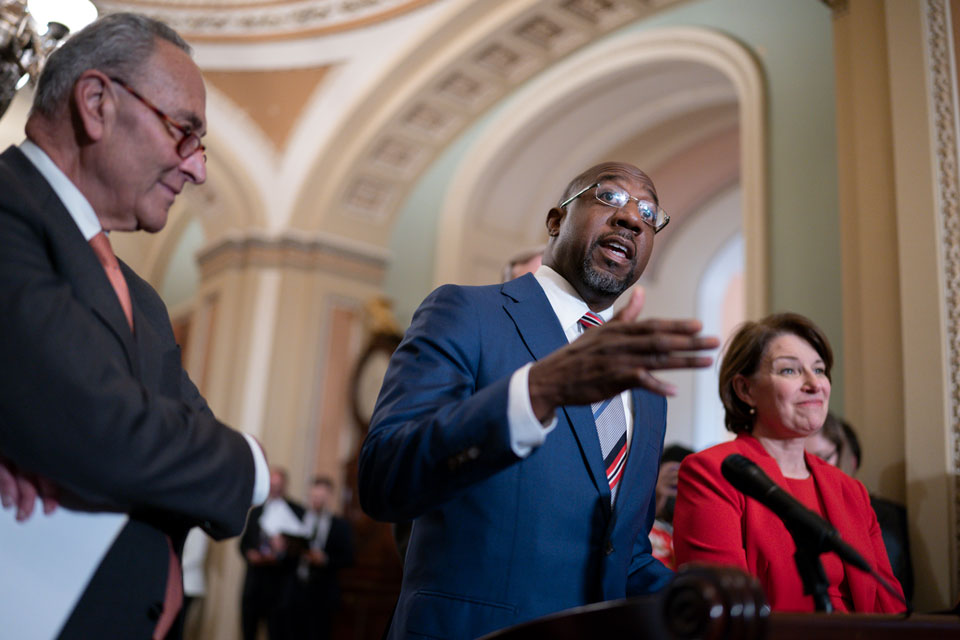 WASHINGTON (AP) — The Democrats' sweeping attempt to rewrite U.S. election and voting law stalled in the Senate Tuesday, blocked by a wall of Republican opposition to what would have been the largest overhaul of the electoral system in a generation.

The bill, known as the For the People Act, would touch on virtually every aspect of how elections are conducted, striking down hurdles to voting that advocates view as the Civil Rights fight of the era, while curbing the influence of money in politics and limiting partisan influence over the drawing of congressional districts.

But many in the GOP say the measure represents a breathtaking federal infringement on states’ authority to conduct their own elections without fraud — and one meant to ultimately benefit Democrats.

It failed on a 50-50 vote after Republicans, some of whom derided the bill as the “Screw the People Act,” denied Democrats the 60 votes needed to begin debate. Vice President Kamala Harris, the first Black woman to hold her office, presided over the chamber as the bill failed.

A powerful tool at state levels

The rejection forces Democrats to reckon with what comes next for their top legislative priority in a narrowly divided Senate. They've touted the measure as a powerful counterweight to scores of proposals advancing in GOP-controlled statehouses making it more difficult to vote.

“This is a battle for the soul of America,” said Senate Majority Leader Chuck Schumer.

“We will keep fighting until we succeed.”

Before the vote, Biden tweeted, “Democrats are united and committed to passing this landmark legislation to protect voting rights, ensure the integrity of our elections and repair and strengthen our democracy.”

Whatever Democrats decide, they will likely be confronted with the same challenge they faced Tuesday when minority Republicans used the filibuster — the same tool that Democrats employed during Donald Trump’s presidency — to block consideration of the bill.

Republican leader Mitch McConnell called the bill a “a solution looking for a problem” and vowed to “put an end to it.”

An attempt to change Senate rules

Pressure has been mounting on Democrats to change Senate rules or watch their priorities languish. A group of moderate Democratic senators, however, including Sens. Joe Manchin and Kyrsten Sinema, have ruled that out, denying the votes needed to make a filibuster change.

Biden has vowed what the White House calls the “fight of his presidency” over ensuring Americans’ access to voting. But without changes to Senate rules, key planks of his agenda, including the voting bill, appear stalled. 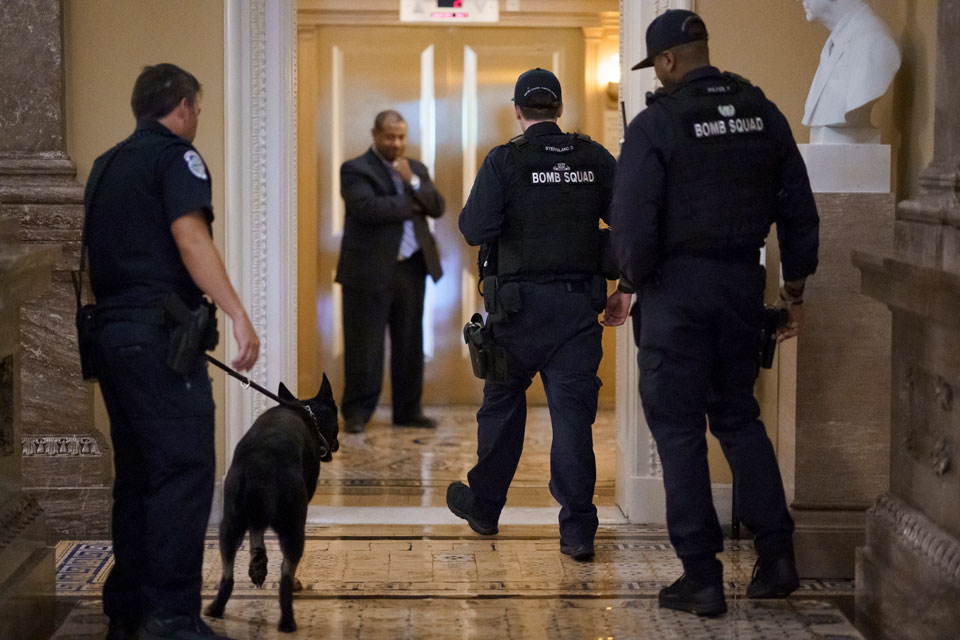 U.S. Capitol Police perform a security sweep outside the Senate chamber before a key vote on a voting rights bill, at the Capitol in Washington, Tuesday, June 22, 2021. (AP Photo/J. Scott Applewhite)Sen. Raphael Warnock, a Georgia Democrat and senior pastor at the Atlanta church Martin Luther King Jr. once led, called minority Republicans’ willingness to prevent debate on the voting bill a “dereliction” of duty.

The changes being enacted in many Republican states are decried by voting rights advocates who argue the restrictions will make it more difficult for people to cast ballots, particularly minority residents who tend to support Democrats. Republicans, cheered on by Trump, talk instead about fighting potential voting fraud and say the Democrats' concerns are wildly overblown.

As the Senate discussion churns, more changes could be coming to the bill.

Democrats want to protect against intimidation at the polls in the aftermath of the 2020 election. They propose enhancing penalties for those who would threaten or intimidate election workers and creating a “buffer zone” between election workers and poll watchers, among other possible changes.

But Democrats have divisions of their own. Until Tuesday, it wasn't even clear that they would be united on the vote to bring the bill up for debate. Manchin, a moderate from West Virginia, announced earlier this month that he couldn't support the bill because it lacked Republican support. 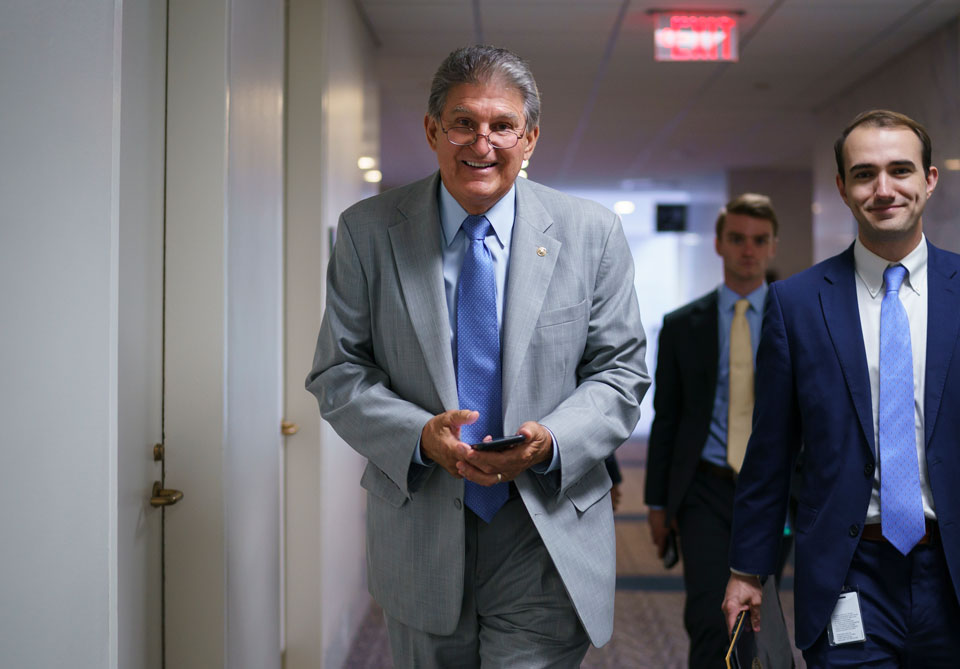 Sen. Joe Manchin, D-W.Va., a key negotiator in the infrastructure talks, arrives at his office on Capitol Hill in Washington, Monday, June 21, 2021. (AP Photo/J. Scott Applewhite)Manchin flipped his vote to a “yes” after Democrats agreed to consider his revised version. His proposal was endorsed by former President Barack Obama and called a “step forward” by Biden's administration.

Manchin has proposed adding provisions for a national voter ID requirement, which is anathema to many Democrats, and dropping a proposed public financing of campaigns.

Those changes did little, however, to garner the bipartisan support Manchin was hoping for. Senate Republicans said they would likely reject any legislation that expands the federal government's role in elections. McConnell dismissed Manchin's version as “equally unacceptable.”

Sen. Lisa Murkowski, a moderate Alaska Republican, said some aspects of the Democratic bill were laudable and she supports other voting rights legislation, like a reinstatement of the Voting Rights Act struck down by the Supreme Court in 2013.

But, ultimately, she said the “sprawling” bill amounted to “a one-size-fits-all mandate coming out of Washington D.C.” that "in many cases doesn’t work.”

Months in the making, Tuesday’s showdown over the For the People Act, as it is called, is hardly the end of the road. The struggle is taking on fresh urgency as Trump continues to challenge the outcome of the 2020 election and new limits move ahead in Republican-led states.

State officials who certified the results of the 2020 election have dismissed Trump’s claims of voter fraud, and judges across the country have thrown out multiple lawsuits filed by Trump and his allies. Trump’s own attorney general said there was no evidence of widespread fraud that would change the outcome.