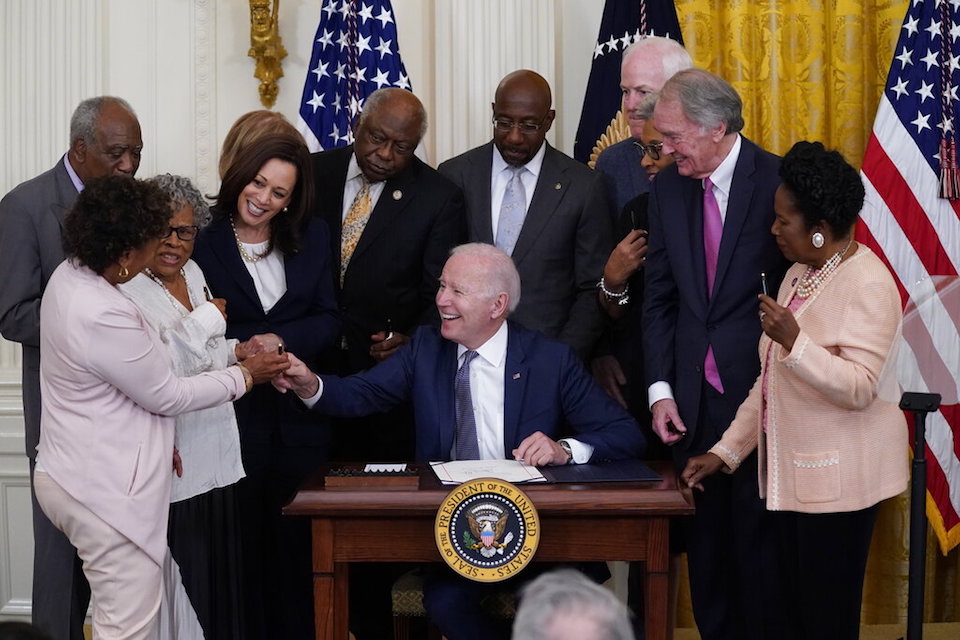 NEW YORK (AP) — The declaration of Juneteenth as a federal holiday is putting the pressure on more U.S. companies to give their employees the day off, accelerating a movement that took off last year in response to the racial justice protests that swept the country.

Hundreds of top companies had already pledged last year to observe Juneteenth in the wake of the police killing of George Floyd and the national reckoning on racism that followed.

But most private companies take their cues from the federal government — the country's largest employer — in drawing up their holiday calendars. President Joe Biden signed legislation Thursday establishing Juneteenth as a federal holiday commemorating the end of slavery, following the passage of a bipartisan Congressional bill.

Some firms look to start next year

More than 800 companies have publicly pledged to observe Juneteenth, according to HellaCreative, a group of Black creative professionals in the San Francisco Bay Area that launched a campaign last year to build corporate support for making the June 19th an official holiday. That is nearly double the number of companies that had joined the pledge last year.

Patagonia, the outdoor apparel retailer, announced that all of its U.S. stores will be closed Saturday, and its corporate offices would be closed Monday. Other brands, including Target, J.C. Penney and Best Buy had pledged last year to adopt Juneteenth as a paid holiday, though they are keeping stores open. Several major banks have said employees will get a floating paid day off.

Many companies, however, had little time to shuffle their holiday calendars. Some offered employees a regular paid day off or promised to consider adding it to their calendars next year.

Nasdaq said its U.S. exchange would stay open Friday and Monday “to maintain a fair and orderly market and to minimize operational risks” but that it would discuss its future holiday schedule with regulators and companies.

State governments that had not already declared Juneteenth a holiday were also scrambling to respond the new federal holiday. Illinois Gov. J.B. Pritzker announced that all state government offices will be closed Friday, superseding a state law signed just two days earlier that would have made June 19 a state holiday next year.

Even though federal holidays like Thanksgiving are widely observed, private companies are under no obligation to offer any particular day off. But since many workers don't know that, they will likely wonder why they are not getting a paid holiday for Juneteenth this year, said Carolina Valencia, a vice president in research firm Gartner’s human resource practice.

In an era of increasing employee activism and a fierce competition for talent, Valencia said she expects the number of companies offering Juneteenth to surge next year after employers have had more time to react.

“Many employees are going to resent their employers for not giving them the holiday because they don't understand that it's a complicated process,” Valencia said.

But she said the devil will be in the details. Many companies will likely offer it as a floating day off, making it unlikely that Juneteenth will become a national holiday on par with July 4th or Memorial Day anytime soon.

No paid day off for many

And many notable companies have not joined the movement. Walmart, which employs 300,000 Black hourly workers and is the country’s largest private sector employer, told The Associated Press in an email that its employees are free to use paid time off to observe any holiday they wish, including Juneteenth.

Raheem Thompson, a social media specialist for a retail company, said he was disappointed he didn't get a paid day off. Instead, he said the company sent an email acknowledging the federal holiday and pledging to consider time off in the future.

“It’s kind of bare minimum," said Thompson, who lives in Atlanta but didn't want his company named for fear of repercussions. “I don’t think as people of color, we really care that you acknowledge it via email ... that doesn’t really have any true meaning to it."

Juneteenth commemorates June 19, 1865, when Union soldiers brought the news of freedom to enslaved Black people in Galveston, Texas — two months after the Confederacy had surrendered. That was also about 2 1/2 years after the Emancipation Proclamation freed slaves in the Southern states.

Black Americans, especially in Texas, have long celebrated Juneteenth with church picnics and speeches. But the federal holiday declaration brought it to the attention of some Americans for the first time.

Diversity and other policies also important

Jamie Hickey, founder small fitness company in Philadelphia, said he had never heard of Juneteenth until he heard about it last week on the radio. Then, his four trainers started talking about it at lunch, and he asked them if it was important to them. He decided to make it a day off next year since it was too late to cancel on clients this year.

“They said, ‘are you serious, you are just now hearing about this?’" said Hickey, who founded Truism Fitness last year after the chain fitness company where he and he other trainers worked closed because of the pandemic.

Hickey said he took the lead from his employees because, as a white man, he worried about jumping into trends only to be accused of tokenism.

“I don’t want to fake. If you are fake, you get caught and it’s a million times worse," Hickey said.

That's a major concern among even the biggest employees, said Erin Eve, CEO of Ichor Strategies, which advises firm on connecting businesses with their communities.

Eve said companies will get called out by their employees, customers and even investors if they take steps like observing Juneteenth without investing in Black communities or looking at their own internal diversity.

“For current employees, it will reaffirm a dissonance with their values," Eve said.