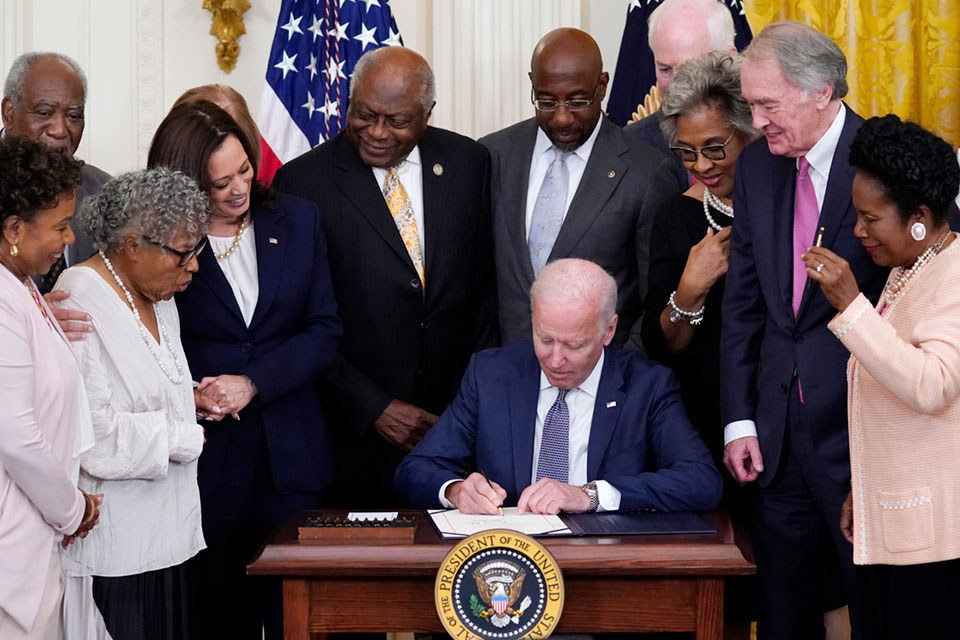 WASHINGTON (AP) — Black Americans rejoiced after President Joe Biden made Juneteenth a federal holiday, but some said that, while they appreciated the recognition at a time of racial reckoning in America, more is needed to change policies that disadvantage too many of their brethren.

“It’s great, but it’s not enough,” said Gwen Grant, president and CEO of the Urban League of Kansas City.

Grant said she was delighted by the quick vote this week by Congress to make Juneteenth a national holiday because “it's been a long time coming.”

But she added that “we need Congress to protect voting rights, and that needs to happen right now so we don't regress any further. That is the most important thing Congress can be addressing at this time.” 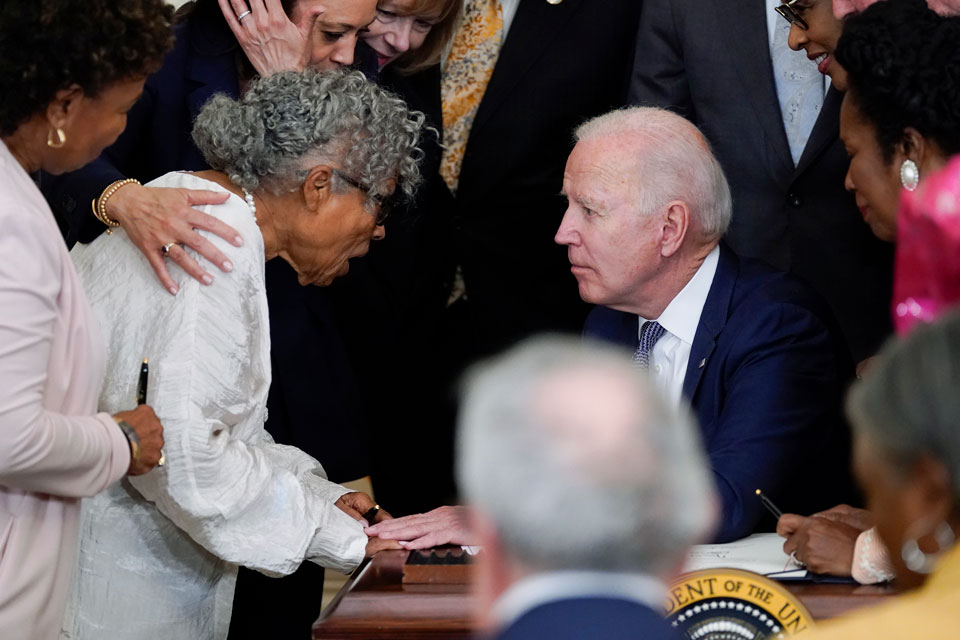 President Joe Biden speaks with Opal Lee after he signed the Juneteenth National Independence Day Act, in the East Room of the White House, Thursday, June 17, 2021, in Washington. (AP Photo/Evan Vucci)At a jubilant White House bill-signing ceremony on Thursday, Biden agreed that more than a commemoration of the events of June 19, 1865, is needed. That’s when Union soldiers brought the news of freedom to enslaved Black people in Galveston, Texas — some 2 1/2 years after President Abraham Lincoln’s Emancipation Proclamation had freed slaves in Southern states.

“This day doesn’t just celebrate the past. It calls for action today,” Biden said before he established Juneteenth National Independence Day. His audience included scores of members of Congress and Opal Lee, a 94-year-old Texas woman who campaigned for the holiday.

Biden singled out voting rights as an area for action.

Republican-led states have enacted or are considering legislation that activists argue would curtail the right to vote, particularly for people of color. Legislation to address voting rights issues, and institute policing reforms demanded after the killing of George Floyd and other unarmed Black men, remains stalled in the Congress that acted swiftly on the Juneteenth bill.

Other people want the federal government to make reparations or financial payments to the descendants of slaves in an attempt to compensate for those wrongs. Meanwhile, efforts are afoot across the country to limit what school districts teach about the history of slavery in America.

Community organizer Kimberly Holmes-Ross, who helped make her hometown of Evanston, Illinois, the first U.S. city to pay reparations, said she was happy about the new federal holiday because it will lead more people to learn about Juneteenth. 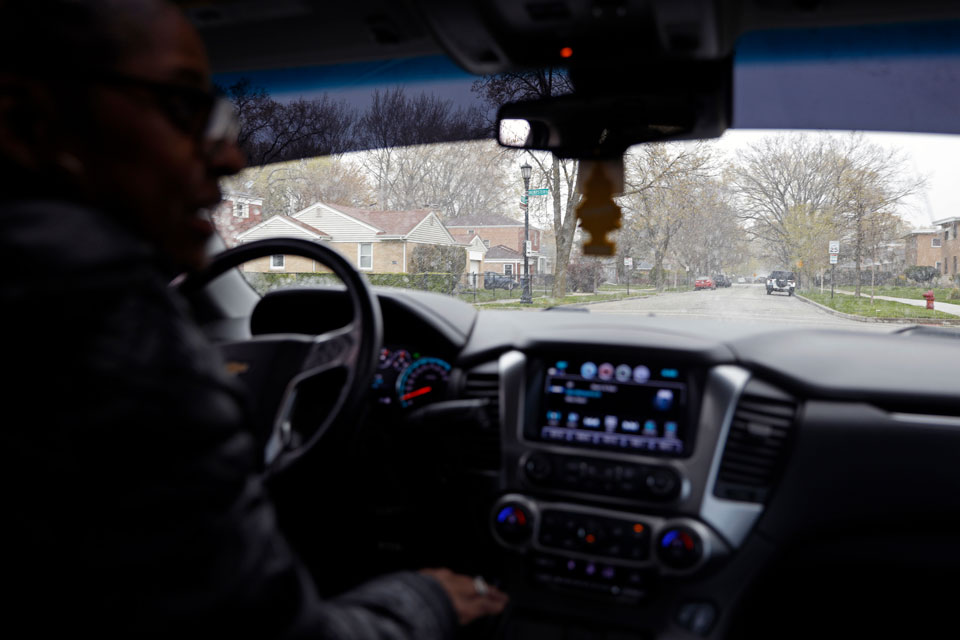 Kimberly Ross-Holmes drives through Evanston fifth ward, where she spent her childhood, Friday, April 23, 2021. The Chicago suburb will become the first to pay reparations in the form of housing grants. She said she is glad that Juneteenth will be a federal holiday, but hopes that the federal government takes up more issues that affect the everyday lives of Black people. (AP Photo/Shafkat Anowar)But she would have liked Congress to act on anti-lynching legislation or voter protections first.

“I am not super stoked only because all of the other things that are still going on,” said Holmes-Ross, 57.

“You haven’t addressed what we really need to talk about.”

Peniel Joseph, an expert on race at the University of Texas at Austin, said the U.S. has never had a holiday or a national commemoration of the end of slavery. Many Black Americans had long celebrated Juneteenth.

“Juneteenth is important symbolically, and we need the substance to follow, but Black people historically have always tried to do multiple things at the same time," Joseph said.

Most federal workers will observe the holiday Friday. Several states and the District of Columbia announced that government offices would be closed Friday.

Juneteenth is the 12th federal holiday, including Inauguration Day once every four years. It's also the first federal holiday since the Martin Luther King Jr. holiday was added in 1983.

Before June 19 became a federal holiday, it was observed in the vast majority of states and the District of Columbia. Texas was first to make Juneteenth a holiday in 1980.

Most white Americans had not heard of Juneteenth before the summer of 2020 and the protests that stirred the nation's conscience over race after Floyd's killing by a Minneapolis police officer, said Matthew Delmont, who teaches history at Dartmouth College.

He said the new federal holiday “hopefully provides a moment on the calendar every year when all Americans can spend time thinking seriously about the history of our country.”

The Senate passed the bill earlier this week by unanimous agreement. But in the House, 14 Republicans voted against it, including Rep. Chip Roy of Texas. Roy said Juneteenth deserves to be commemorated, but he objected to the use of “independence” in the holiday's name.

“This name needlessly divides our nation on a matter that should instead bring us together by creating a separate Independence Day based on the color of one's skin,” he said in a statement.

Added Rep. Paul Gosar, R-Ariz., who also voted against the bill: “We have one Independence Day, and it applies equally to all people of all races.” 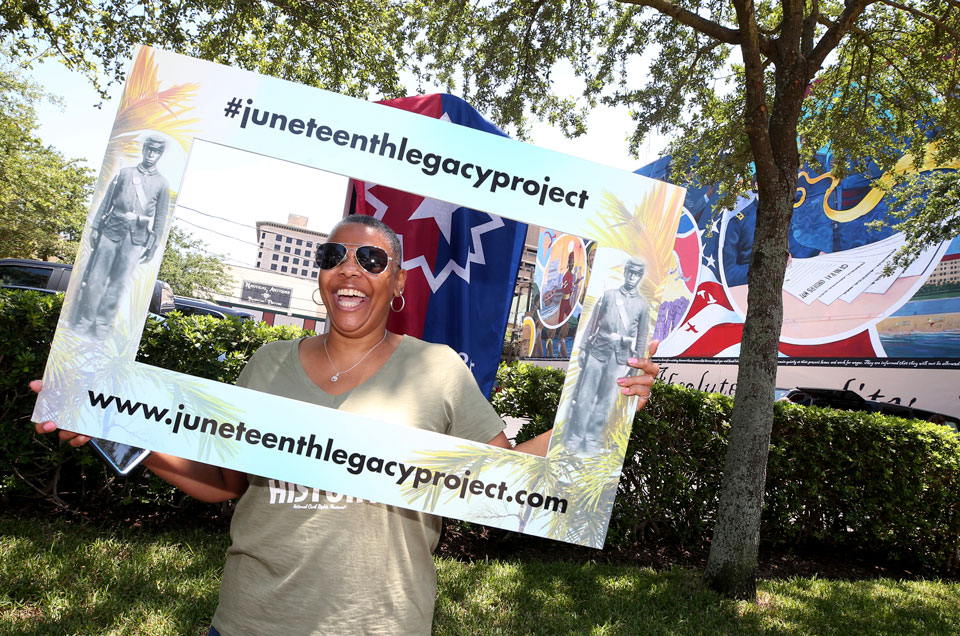 Sheila Dennis poses for a photo at the Juneteenth historical marker near the "Absolute Equality" mural in Galveston, Texas on Thursday, June 17, 2021, as she waits for word that President Joe Biden signed the Juneteenth National Independence Day Act into law. (Jennifer Reynolds/The Galveston County Daily News via AP)The sentiment was different in Texas, the first state to make Juneteenth a holiday.

“I'm happy as pink,” said Doug Matthews, 70, and a former city manager of Galveston who has helped coordinate the community's Juneteenth celebrations since Texas made it a holiday.

He credited the work of state and local leaders with paving the way for this week's step by Congress.

“I'm also proud that everything started in Galveston,” Matthews said.

Pete Henley, 71, was setting up tables Thursday for a Juneteenth celebration at the Old Central Cultural Center, a Galveston building that once was a segregated Black school. He said the Juneteenth holiday will help promote understanding and unity.

“All holidays have significance, no matter what the occasion or what it’s about, but by it being a federal holiday, it speaks volumes to what the country thinks about that specific day,” said Henley, who studied at the school before it was integrated and is president of the cultural center.

He said his family traces its roots back to enslaved men and women in the Texas city who were among the last to receive word of the Emancipation Proclamation.

“As a country, we really need to be striving toward togetherness more than anything,” Henley said.

“If we just learn to love each other, it would be so great.”

Holmes-Ross recalled first learning about Juneteenth in church in Evanston, a Lake Michigan suburb just outside Chicago. Over the years, she said she made sure her three children commemorated the day with community events including food, dancing and spoken word performances.

She said it was about more than a day off for her family and expressed hope that it would be for others, too.

“We were intentional about seeking out Black leaders and things we could celebrate as African Americans,” Holmes-Ross said. “Hopefully, people do something productive with it. It is a day of service.”