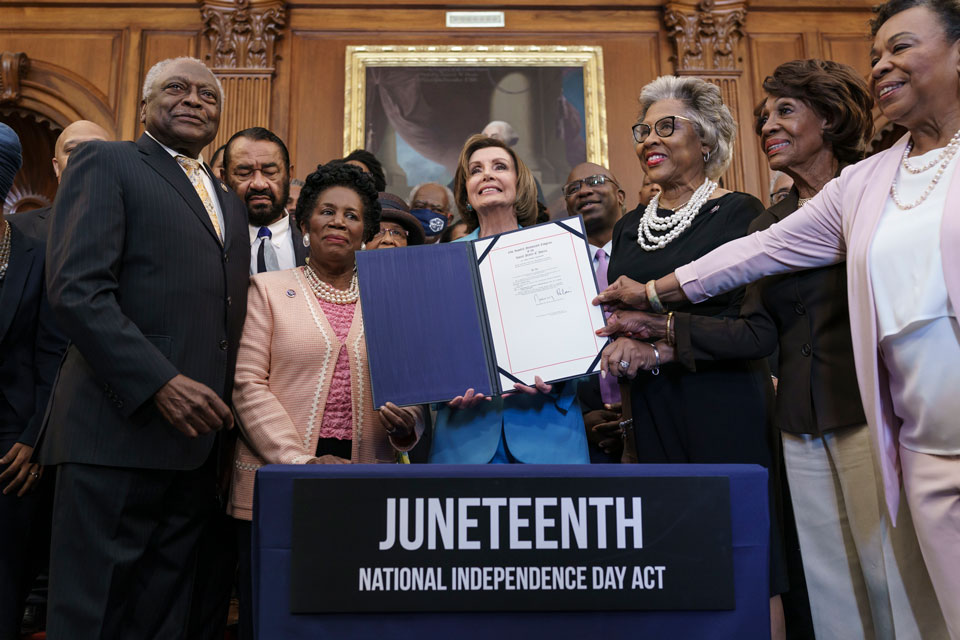 WASHINGTON (AP) — The United States is commemorating the end of slavery with a new federal holiday.

President Joe Biden is set to sign legislation into law Thursday to make Juneteenth, or June 19, the 12th federal holiday. The House voted 415-14 on Wednesday to send the bill to Biden.

Juneteenth commemorates June 19, 1865, when Union soldiers brought the news of freedom to enslaved Black people in Galveston, Texas — two months after the Confederacy had surrendered. That was also about 2 1/2 years after the Emancipation Proclamation freed slaves in the Southern states.

The U.S. Office of Personnel Management, which is the human resources office for the federal government, tweeted Thursday that most federal employees will observe the new holiday — Juneteenth National Independence Day — on Friday since June 19 falls on a Saturday this year.

Today @POTUS will sign the Juneteenth National Independence Day Act, establishing June 19th as a federal holiday. As the 19th falls on a Saturday, most federal employees will observe the holiday tomorrow, June 18th.

“Our federal holidays are purposely few in number and recognize the most important milestones," said Rep. Carolyn Maloney, D-N.Y. “I cannot think of a more important milestone to commemorate than the end of slavery in the United States." 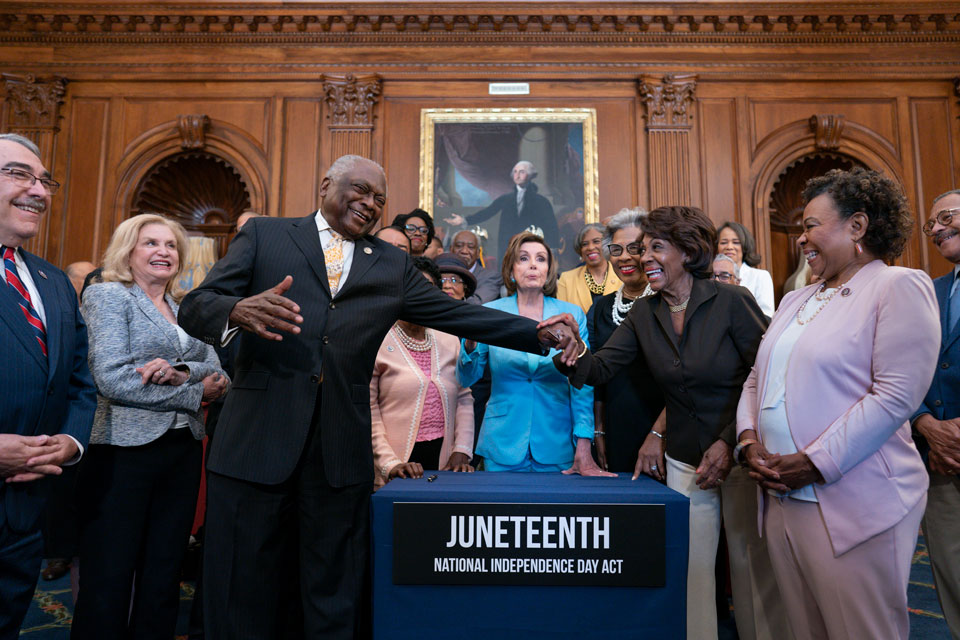 House Majority Whip James Clyburn, D-S.C., center left, reaches over to Rep. Maxine Waters, D-Calif., joined by Speaker of the House Nancy Pelosi, D-Calif., center, and members of the Congressional Black Caucus as they celebrate the Juneteenth National Independence Day Act that creates a new federal holiday to commemorate June 19, 1865, when Union soldiers brought the news of freedom to enslaved Black people after the Civil War, at the Capitol in Washington, Thursday, June 17, 2021. (AP Photo/J. Scott Applewhite)Rep. Sheila Jackson Lee, D-Texas, speaking next to a large poster of a Black man whose back bore massive scarring from being whipped, said she would be in Galveston on Saturday to celebrate along with Republican Sen. John Cornyn of Texas.

“Can you imagine?” said Jackson Lee. “I will be standing maybe taller than Sen. Cornyn, forgive me for that, because it will be such an elevation of joy.”

The Senate passed the bill on Tuesday under a unanimous consent agreement that expedites the process for considering legislation. It takes just one senator’s objection to block such agreements.

The vote comes as lawmakers struggle to overcome divisions on police reform legislation following the killing of George Floyd by police and as Republican state legislators push what experts say is an unprecedented number of bills aimed at restricting access to the ballot box. While Republicans say the goal is to prevent voter fraud, Democrats contend that the measures are aimed at undermining minority voting rights.

Several members of the Congressional Black Caucus went to the floor to speak in favor of the bill. Rep. Bonnie Watson Coleman, D-N.J., said she viewed Juneteenth as a commemoration rather than a celebration because it represented something that was delayed in happening.

“It also reminds me of what we don't have today," she said. “And that is full access to justice, freedom and equality.

"All these are often in short supply as it relates to the Black community."

The bill was sponsored by Sen. Edward Markey, D-Mass., and had 60 co-sponsors. Democratic leaders moved quickly to bring the bill to the House floor after the Senate's vote the day before.

“Since I believe in treating everyone equally, regardless of race, and that we should be focused on what unites us rather than our differences, I will vote no," he said in a press release. 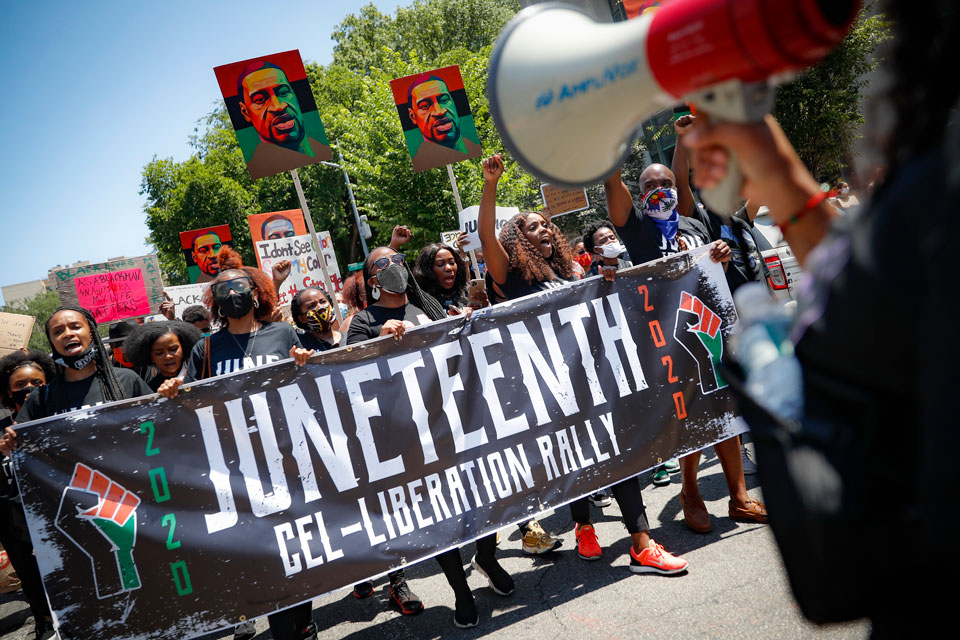 In this June 19, 2020, file photo, protesters chant as they march after a Juneteenth rally at the Brooklyn Museum, in the Brooklyn borough of New York. (AP Photo/John Minchillo, File)The vast majority of states recognize Juneteenth as a holiday or have an official observance of the day, and most states hold celebrations. Juneteenth is a paid holiday for state employees in Texas, New York, Virginia and Washington.

Disagreement over the name

Rep. Clay Higgins, R-La., said he would vote for the bill and that he supported the establishment of a federal holiday, but he was upset that the name of the holiday included the word “independence” rather than “emancipation.”

“Why would the Democrats want to politicize this by coopting the name of our sacred holiday of Independence Day?" Higgins asked.

Rep. Brenda Lawrence, D-Mich., replied, “I want to say to my white colleagues on the other side: Getting your independence from being enslaved in a country is different from a country getting independence to rule themselves.”

She added, "We have a responsibility to teach every generation of Black and white Americans the pride of a people who have survived, endured and succeeded in these United States of America despite slavery."