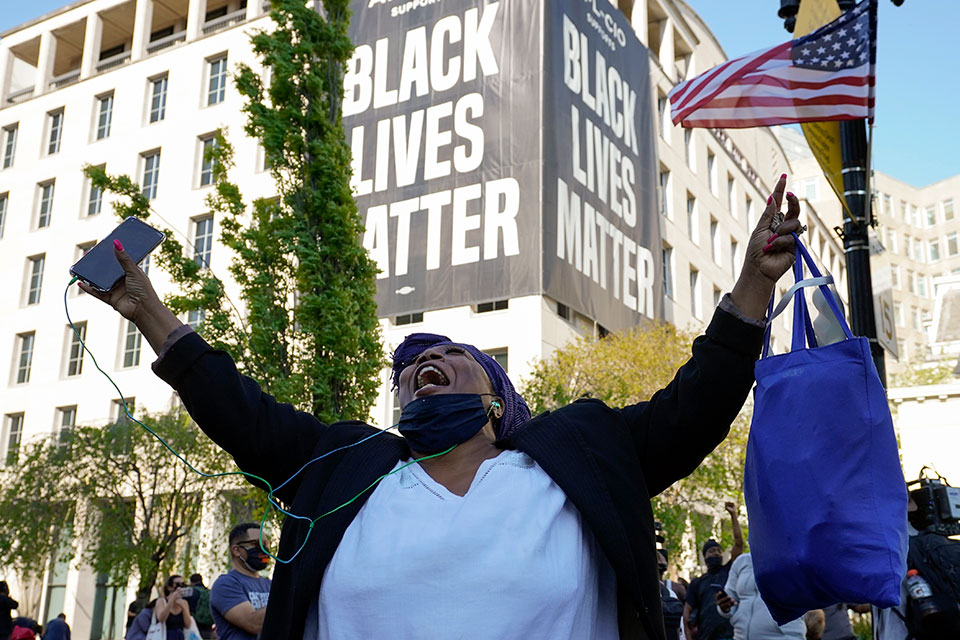 A year after George Floyd’s murder at the hands of a white police officer sparked global protests and a racial reckoning, a majority of Americans say racism and police violence are serious problems facing the nation. Yet relatively few believe attention in the past year to the issues has led to positive change.

Is race a factor in police interactions?

A poll from The Associated Press-NORC Center for Public Affairs Research shows Americans are more likely than they were before Floyd’s death to say that police violence is a serious problem and about half think police who cause harm on the job are treated too leniently by the justice system. The poll also found that about 6 in 10 Americans say racism in the United States is a very or extremely serious problem; it's similar to the percentage that said the same thing one year ago. 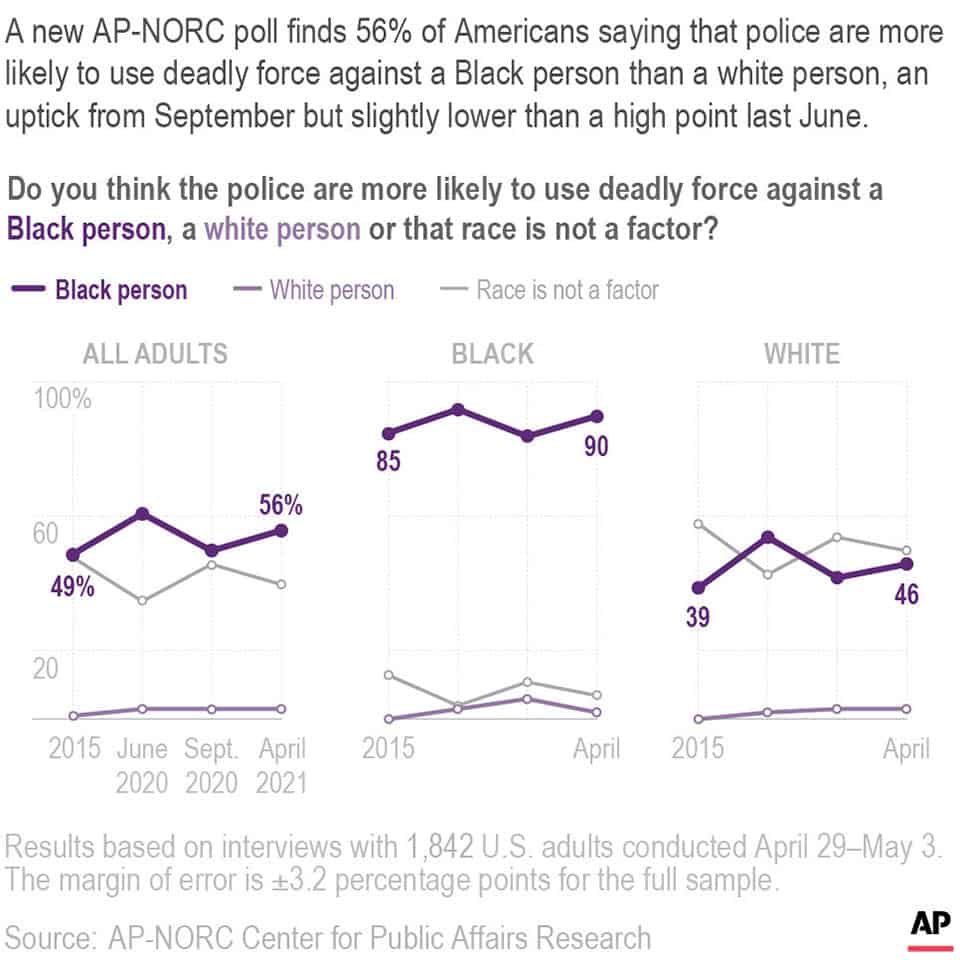 More than half say police are more likely to use deadly force against Black people: A new AP-NORC poll finds 56% of Americans saying that police are more likely to use deadly force against a Black person than a white person, an uptick from September but slightly lower than a high point last June
But about half of Americans, including about 6 in 10 Black Americans, say Derek Chauvin conviction of Floyd’s murder has not changed their level of confidence in the criminal justice system. About one-third say their confidence increased. Chauvin, a former Minneapolis police officer, was convicted in April on state charges of murder and manslaughter in Floyd’s death. A federal grand jury indicted Chauvin and three other former Minneapolis police officers involved in Floyd’s arrest and death after the poll was conducted.

“Racism is a core feature of American life and it dominates certain relationships between African Americans and white Americans in ways that I don’t see how they’re going to change in the near or distant future,” said Kyle T. Mays, assistant professor in African American Studies and American Indian Studies at the University of California, Los Angeles.

AP-NORC polling showed a shift in views of police violence and injustice toward Black Americans last June, just weeks after Floyd’s killing. In 2019, just 36% of Americans called police violence an extremely or very serious problem. After Floyd was killed, that number increased to 48%, and 45% say so now. About 6 in 10 say police are more likely to use deadly force against a Black person than against a white person.

Georgia resident Linda R. Curtis, who was a police officer for 24 years, believes police misconduct is a serious issue, partly because of problematic behavior she witnessed throughout her career. Despite her history within law enforcement, as a Black woman, she worries about her family's safety.

Majority in favor of reform

A majority of Americans continue to support sweeping changes to the criminal justice system, including 25% who think it needs a complete overhaul and 43% that it needs major changes. An additional 27% support minor changes, while just 4% think no changes are needed. Black Americans are most likely to call for the largest changes.

Louisiana resident Alan Hence said that as a Black man, he has faced discrimination by police who, he believed, were often aggressive toward him during routine traffic stops because of his race. His personal encounters and the “deep hurt” he felt after the killing of Floyd and other Black Americans at the hands of police reinforced his belief that the nation’s criminal justice system needs to be overhauled.

“This country was founded on supremacy that cultivated racism and I believe that it created a culture in America that stands strong today and has proven extremely hard to change,”

said Hence, 40. “But investing in changing police culture, changing their relationships and procedures when dealing with the public, could have a drastic effect.”

“Nothing has really fundamentally changed, even if you put one individual in prison for police violence,” said Mays, the UCLA professor and author of “An Afro-Indigenous History of the United States.”

The House of Representatives passed the George Floyd Justice in Policing Act in March, but the bill is unlikely to win approval in the Senate before the May 25 anniversary of Floyd’s death. The bill, which would end qualified immunity and implement other changes, has faced significant Republican opposition, as well as criticism from some activists who believe it doesn’t go far enough.

Beyond policing, about 8 in 10 Black Americans and about two-thirds of both Hispanic and Asian Americans say racism in the U.S. is a very or extremely serious problem. Among white Americans, about half call it that serious, and about 3 in 10 more say it is moderately serious.

Black Americans say they personally have faced discrimination in a variety of ways. Six in 10 say they have been discriminated against often or sometimes when dealing with the police, compared with just about 1 in 10 white Americans. About 3 in 10 Asian Americans and about 4 in 10 Hispanic Americans say the same.

About 6 in 10 Black Americans also say they have been regularly discriminated against when applying for jobs or in stores or shopping malls, about half when applying for housing or for a loan and about 4 in 10 when receiving health care. 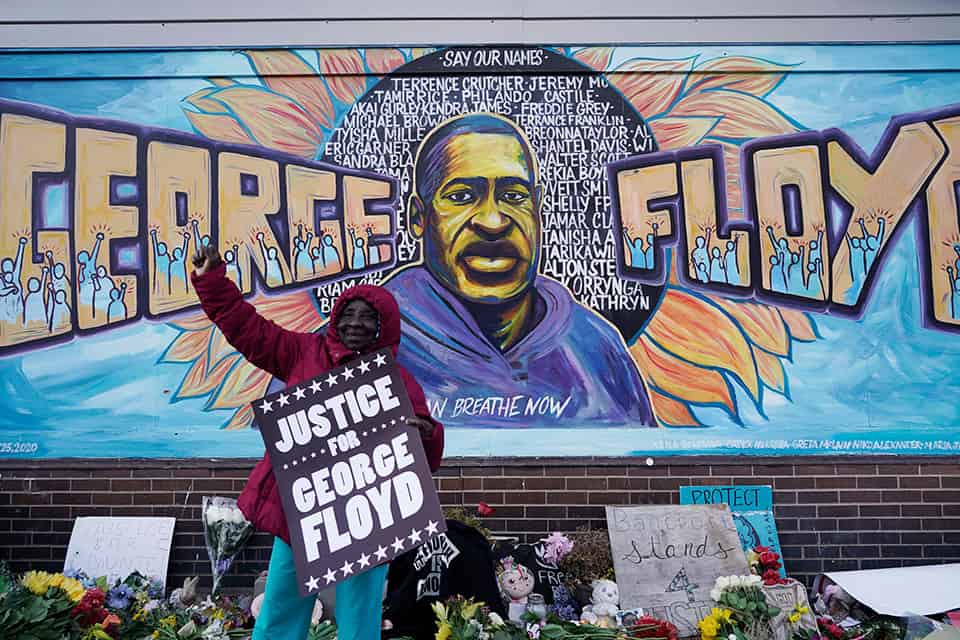 FILE - In this April 20, 2021 file photo, a person reacts near Cup Foods after a guilty verdict was announced at the trial of former Minneapolis police Officer Derek Chauvin for the 2020 death of George Floyd, in Minneapolis, Minn. A new poll from The Associated Press-NORC Center for Public Affairs Research shows Americans are more likely than they were before Floyd’s death to say that police violence is a serious problem and about half think police who cause harm on the job are treated too leniently by the justice system. The poll also found about 6 in 10 Americans say racism in the U.S. is a very or extremely serious problem, similar to the percentage that said the same one year ago. (AP Photo/Morry Gash)

The intersection of dueling crises — the pandemic and the racial justice movement — that have disparately impacted people of color has forced some white Americans in particular to struggle with the nation’s history of racism in ways that they never have before.

“George Floyd definitely had an impact on me,” said Andy Campbell, 57 and an Oklahoma minister. “It was a matter of realizing that the whole country was built on this lie of racism. And that the history of the country was built on a lie of exceptionalism. White supremacy is a white problem. That’s who has to deal with it.”