US Cities See Surge in Deadly Street Racing Amid Pandemic 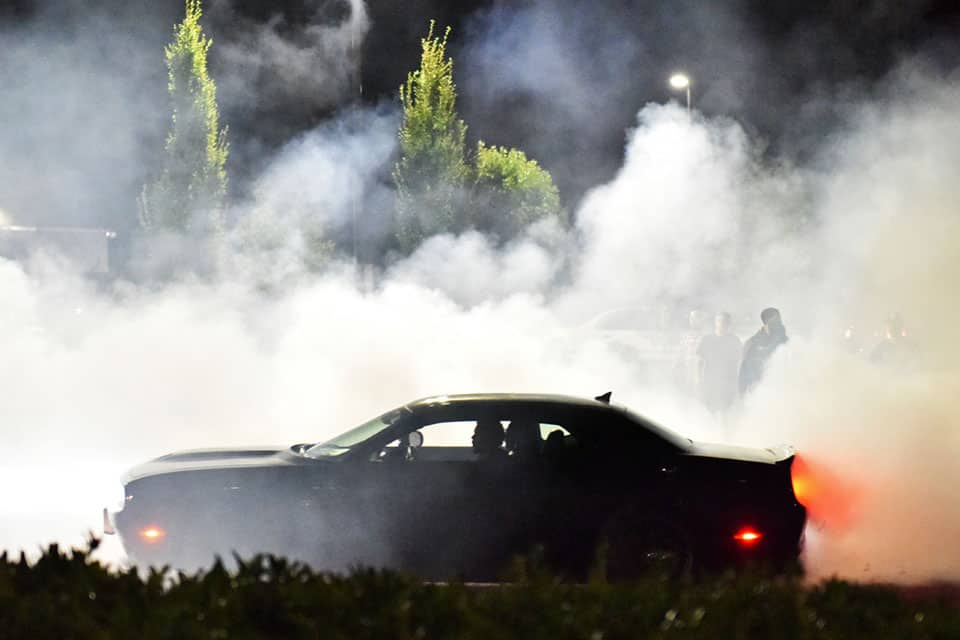 Jaye Sanford, a 52-year-old mother of two, was driving home in suburban Atlanta on Nov. 21 when a man in a Dodge Challenger muscle car who was allegedly street racing crashed into her head-on, killing her.

Sanford was remembered by friends as kind and thoughtful, but now she will also be remembered for something else: a new state law that requires jail time for all convictions for drag racing and stunt driving.

Across America, illegal drag racing has exploded in popularity since the coronavirus pandemic began, with dangerous upticks reported from Georgia and New York to New Mexico and Oregon.

Street racers block roads and even interstates to keep police away while they tear around and perform stunts, often captured on videos that go viral. Packs of vehicles, from souped-up jalopies to high-end sports cars, roar down city streets, through industrial neighborhoods and down rural roads. 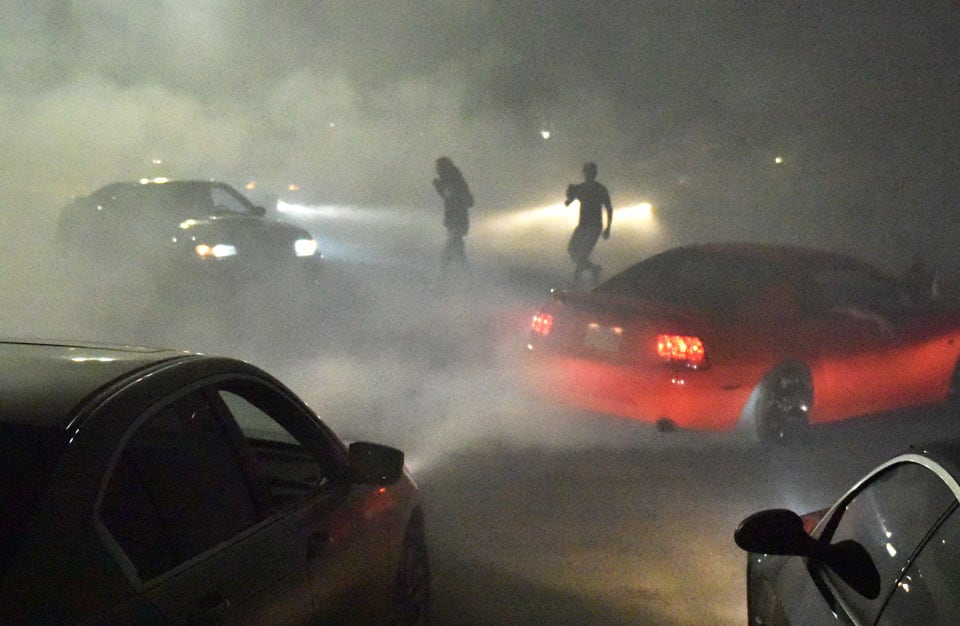 Street racers gather the evening of Sunday, Aug. 12, 2018, in the parking lot of the Goodwill on Northeast Marine Drive and 122nd Avenue in Portland, Ore. Across America, police are confronting illegal drag racing whose popularity has surged since the coronavirus pandemic and lockdowns began. Drivers have blocked off roads to race and to etch donut patterns on pavement with the tires of their souped-up cars. From Portland, Oregon; to Albuquerque, New Mexico; from Nashville, Tennessee; to New York City, officials are reporting a dangerous, and sometimes deadly, uptick in street racing.(Anna Spoerre /The Oregonian via AP)
Experts say TV shows and movies glorifying street racing had already fueled interest in recent years.

Then shutdowns associated with the pandemic cleared normally clogged highways as commuters worked from home.

Those with a passion for fast cars often had time to modify them, and to show them off, said Tami Eggleston, a sports psychologist who participates in legal drag racing.

“With COVID, when we were separated from people, I think people sort of bonded in their interest groups,” said Eggleston, who is also the provost of McKendree University, a small college in suburban St. Louis. “So that need to want to socialize and be around other people brought the racers out.”

But people have been killed. The snarl of engines and traffic tie-ups have become huge annoyances. Racers have been reported wielding guns and strewing beer cans in parking lots.

Now, police in many cities are stepping up enforcement, and states are fighting back with new laws.

Georgia Gov. Brian Kemp signed the bill named for Sanford last week after it passed the General Assembly. Besides mandating at least 10 days of jail time for all drag racing convictions, the measure requires people convicted a third time within five years to forfeit their vehicles.

“This illegal activity is very dangerous,” the Republican governor said at a bill-signing ceremony. “Our goal is simple: to protect every family in every community.”

“While there’s been less traffic during the pandemic, some drivers have used this as an opportunity to treat our streets like a NASCAR speedway.”

The Democratic lawmaker has introduced legislation that would authorize New York City to operate its speed cameras overnight and on weekends in hot spots for illegal street racing. The Senate Transportation Committee recently unanimously approved the measure, setting it up for a floor vote.

In Mississippi, Republican Gov. Tate Reeves signed into law in March a bill that allows state troopers to respond to incidents in cities. On New Year’s Eve, drivers blocked traffic on an interstate highway in Jackson, the state capital, for an hour while they spun out and did donuts, etching circles in the pavement.

Even though the highway patrol headquarters was nearby, troopers couldn’t respond because they were prohibited from handling incidents in cities with over 15,000 people. That prohibition will be lifted when the new law takes effect July 1.

In Arizona, the state Senate has passed a bill to impose harsher penalties. It now awaits a House vote. Under an ordinance approved in March by the Phoenix City Council, police can impound a car involved in street racing or reckless driving for up to 30 days.

Meanwhile, the death toll climbs. On the night of May 2, a 28-year-old woman was killed in Phoenix when a street racer crashed into her car. A man was arrested on suspicion of manslaughter.

Police in Albuquerque, New Mexico, handed out thousands of tickets for speeding and racing since a crackdown began in October.

“Racing up and down our streets is so deadly, especially while more kids, seniors, pedestrians and cyclists are out during this pandemic,” said Albuquerque Mayor Tim Keller.

Street racing in an industrial neighborhood of Portland, Oregon, scares people who work there. A motorcyclist was killed last month in a crash that police said apparently involved racing. Business owners on April 2 wrote to the mayor and city commissioners, asking them to take action. 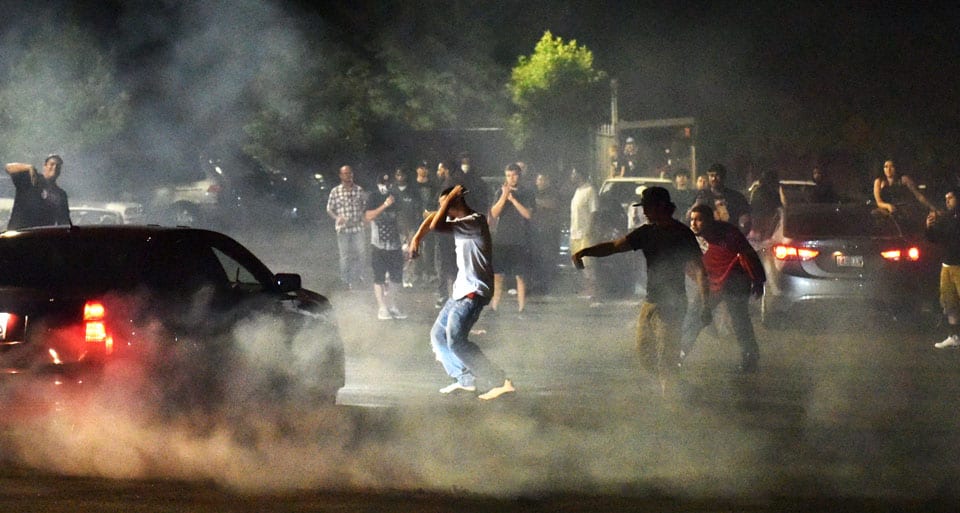 Street racers gather the evening of Sunday, Aug. 12, 2018, in the parking lot of the Goodwill on Northeast Marine Drive and 122nd Avenue in Portland, Ore. Across America, police are confronting illegal drag racing whose popularity has surged since the coronavirus pandemic and lockdowns began. Drivers have blocked off roads to race and to etch donut patterns on pavement with the tires of their souped-up cars. From Portland, Oregon; to Albuquerque, New Mexico; from Nashville, Tennessee; to New York City, officials are reporting a dangerous, and sometimes deadly, uptick in street racing.(Anna Spoerre /The Oregonian via AP)Kathryn, an employee in the neighborhood’s Portland French Bakery, says the roadside and its 2-mile (3.2 kilometer) straightaway are littered with alcohol containers on Mondays after weekends of racing and stunts. Spray-painted lines mark start and finish lines. Parking lots are scarred by circular tire tracks or completely eroded in places by spinning tires.

“A lot of the employees are afraid to go anywhere near them, honestly. There’s been a couple of shootings,” said Kathryn, who didn’t want her last name used because she was worried about possible retaliation from street racers.

Portland police say they’re too overwhelmed to do much about it.

“The city of Portland has experienced an enormous increase in our shooting rate, a staggering amount of volatile demonstrations, while our staffing numbers have dwindled,” said acting Lt. Michael Roberts, who is tasked with addressing illegal street racing.

“We often do not have the bandwidth to address the street racer calls.”

In Denver, police have deployed a helicopter to track races, closed lanes often used by racers and sent officers to places where racers meet. On April 3, a mother was killed when a street racer broadsided her car in downtown Denver. 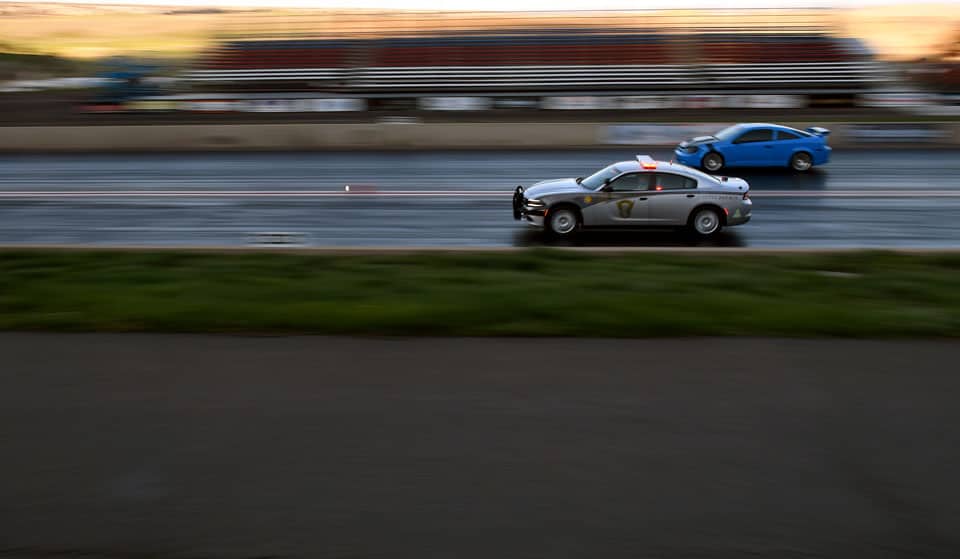 Colorado State Patrol Trooper Josh Lewis races at Bandimere Speedway west of Denver on Wednesday, May 5, 2021. The State Patrol runs a program called "Take it to the Track" in hopes of luring racers away from public areas to a safer and more controlled environment. The program's goals have gained new importance and urgency this year as illegal street racing has increased amid the coronavirus pandemic. (AP Photo/Thomas Peipert)In one of the most notorious incidents, hundreds of street racers clogged a stretch of interstate in nearby Aurora on March 7 while they raced and cruised. Police warned other motorists to stay away amid reports of guns being brandished and fireworks going off.

The events have given more urgency to a long-standing effort by the Colorado State Patrol to lure street racers to a safer environment. The agency's “Take it to the Track” program features weekly contests at Bandimere Speedway, in the foothills west of Denver. 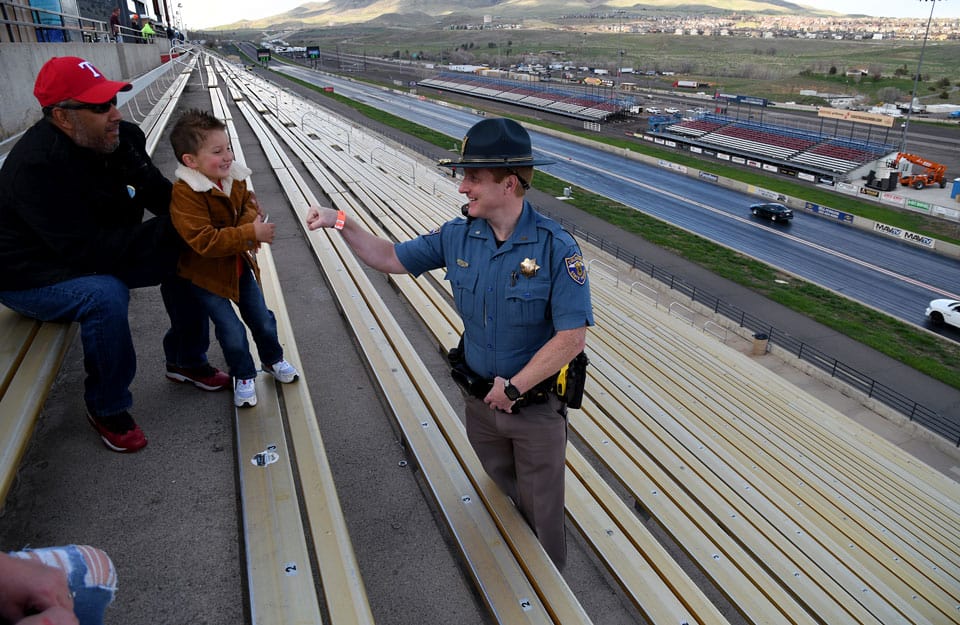 Colorado State Patrol Trooper Josh Lewis fist bumps 3-year-old Lincoln Delagarza, of Northglenn, Colorado, before racing begins at Bandimere Speedway west of Denver on May 5, 2021. The State Patrol runs a program called "Take it to the Track" in hopes of luring racers away from public areas to a safer and more controlled environment, even allowing participants to race a trooper driving a patrol car. The program's goals have gained new importance and urgency this year as illegal street racing has increased amid the coronavirus pandemic. (AP Photo/Thomas Peipert)“You can bring out whatever you have, be it a supercar or mom’s minivan, grandpa’s Buick,” Trooper Josh Lewis said at the racetrack last week.

“And you can race a cop, and do so legally.”

Lewis then beat a Toyota SUV on the quarter-mile track, reaching 88 mph (142 kph) in his Dodge Charger.

Ray Propes, 58, started street racing when he was 16 but now prefers Bandimere Speedway for its traction and safety.

“You don’t have to worry about accidents, animals, kids, birds, anything,” he said.