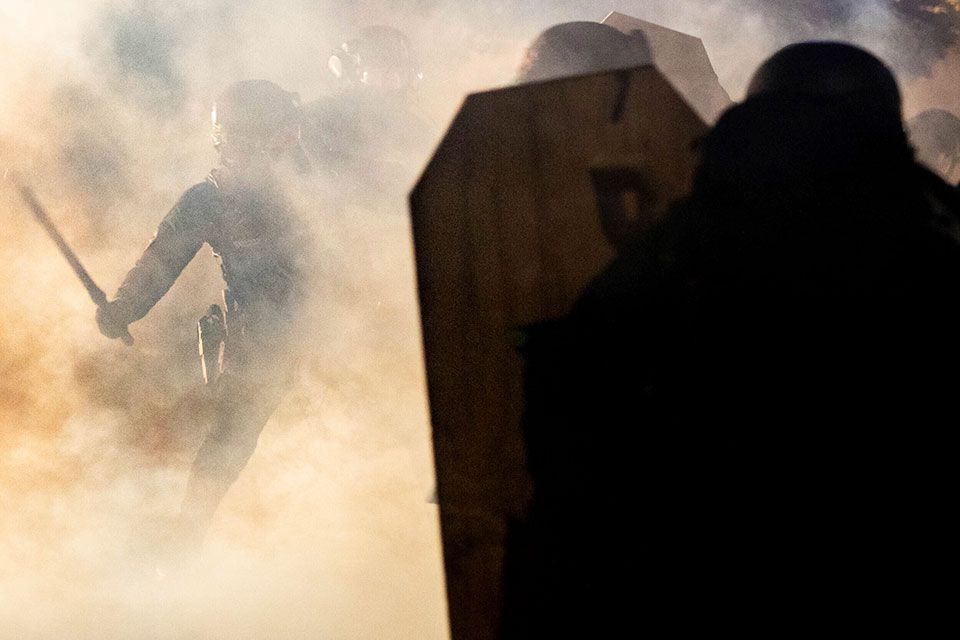 The guilty verdicts in the George Floyd murder case felt like a watershed moment to many Americans. President Biden called the verdicts a “giant step toward justice.” But pervasive legal roadblocks to police accountability remain firmly in place.

Most police officers who violate citizens’ rights get away with it because the law is heavily stacked in their favor, legal experts say. None of those legal roadblocks was removed by the guilty verdicts against Derek Chauvin.

All are escape hatches that allow abusive officers to keep their badges despite sexual assaults, excessive force, false reports, cover-ups and perjury.

In the Chauvin trial, Minnesota required the jury to apply the tough “objective reasonableness” standard that makes it hard to convict officers. That standard requires a judge or jury to see the police action “from the perspective of a reasonable officer on the scene.” They can’t second-guess a decision made in the heat of the moment.

That objective reasonableness standard comes from the 1989 U.S. Supreme Court decision Graham v. Connor. What many people don’t realize is that states and municipalities can adopt new use of force standards that hold police to a higher standard of conduct. A few jurisdictions have done that in the past year but not many.

“There has been change since Ferguson but some of the fundamentals remain stuck,” says David A. Harris, a law professor at the University of Pittsburgh and expert on police.

One thing states and cities can do is “raise the bar for the use of force,” he said in an interview. “What people forget is that the Supreme Court set a minimum standard for the protection of citizens from state action by police. While states can’t give citizens less protection, they can create more. In the last year we’ve seen some movement in that direction.”

As long as the objective reasonableness standard remains in place, says Harris, few officers will be convicted. “At the end of the trial, the jury is told the officer feared for his life, the suspect was reaching for a gun and don’t second guess him,” says Harris. “And it takes only one person to hang the jury.”

Abusive police are seldom prosecuted and those prosecuted usually aren’t convicted. Police kill about 1,000 people each year, according to a Washington Post database, but few go to prison or lose their jobs.

Philip M. Stinson, a cop turned criminal justice professor at Bowling Green State University, keeps the statistics. Since 2005, 121 officers have been charged with murder or manslaughter in nonfederal cases involving killings on-duty. Of the 95 cases that have concluded, fewer than half - 44 - resulted in convictions and then often to lesser charges.

Federal prosecutions and convictions for violating a citizen’s civil rights also are rare and unsuccessful because of a high burden of proof. 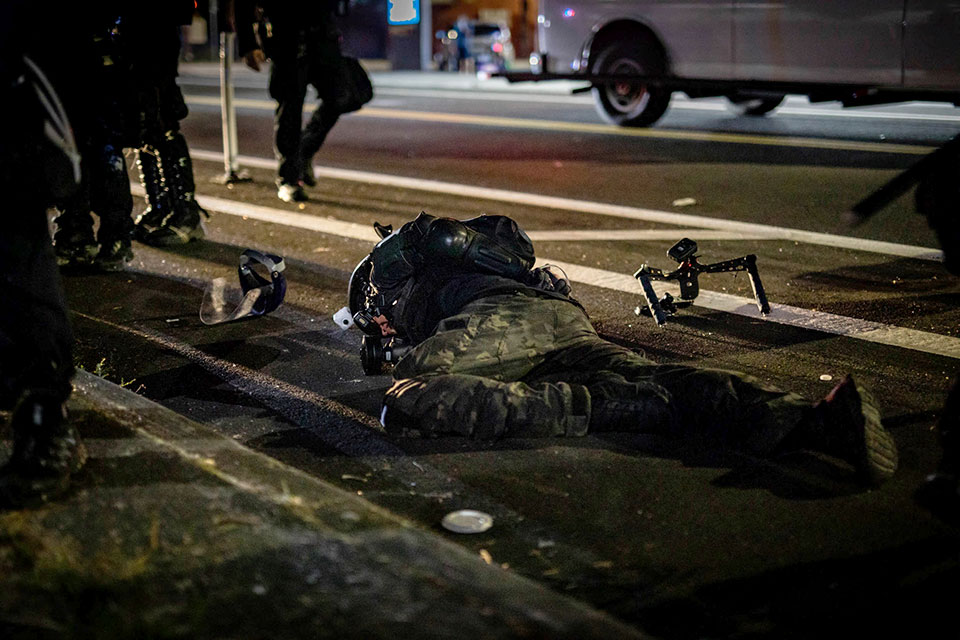 In this Aug. 5, 2020 photo, an activist who was filming protests lies on the street after being tackled by a police officer in Portland, Ore. His camera rig is seen on the ground nearby. Most police officers who violate citizens’ rights get away with it because the law is heavily stacked in their favor, legal experts say. (Maranie Rae Staab via AP)

Between 1990 and 2019, federal prosecutors filed criminal civil rights charges against an average of 41 officers a year - even though they get referrals 10 times greater, reports the Transactional Records Access Clearinghouse at Syracuse University.

In 2019, the Justice Department filed 49 criminal civil rights cases against officers. That’s a thimbleful contrasted to the 69,000 cases for illegal border crossings.

In recent years, federal prosecutors declined to file charges in the deaths of Eric Garner in Staten Island, Michael Brown in Ferguson and Tamir Rice in Cleveland.

Only a month before Chauvin was convicted, federal prosecutors lost one of their biggest cases in St. Louis despite strong evidence. A federal jury did not return a conviction against three white St. Louis police officers who beat a Black undercover officer whom they mistook for a protester. The case was particularly strong because two police colleagues pleaded guilty and testified against the three. But defense lawyers portrayed the federal prosecutors as carpetbaggers from Washington and the federal jury, with only one Black member, refused to convict.

During the Trump administration, the Justice Department refused to use one of its most potent legal weapons, pattern-or-practice suits. After the Rodney King beating in 1991, Congress gave the Justice Department the power to conduct investigations of local police departments to look for patterns of unconstitutional policing. When they found them, as they did after the killing of Michael Brown in Ferguson, they entered into consent decrees to force reform.

But former President Donald Trump and former Attorney General Jeff Sessions strongly opposed that kind of federal interference into local law enforcement. There was only one such case during his entire administration. “There was probably no stronger opponent in Congress to this tool than Sessions,” says Pitt’s Harris.

Attorney General Merrick Garland reversed the Trump policy in announcing after the Chauvin verdict that he was starting a pattern-or-practice investigation of the Minneapolis police and would revitalize that legal tool in other cities.

The Pulitzer Center on Crisis Reporting studied the roadblocks to police accountability. A team of a dozen college journalists around the country filed Freedom of Information Act requests for data on police misconduct. Among the findings:

Police unions became common and powerful in the 1970s in reaction to the Civil Rights Movement, which often targeted police brutality. The police unions have argued that the nation’s 700,000 police should have due process protections when they are accused of wrongdoing; only few “bad apples” abuse citizens, they say, but the honest officer often suffers from frivolous complaints.

Reformers respond that databases show that bad apples are counted in the tens of thousands. There are more than 300,000 officers in a recently released database of complaints in New York. The national database of officers who lost their badges is 30,000-plus. 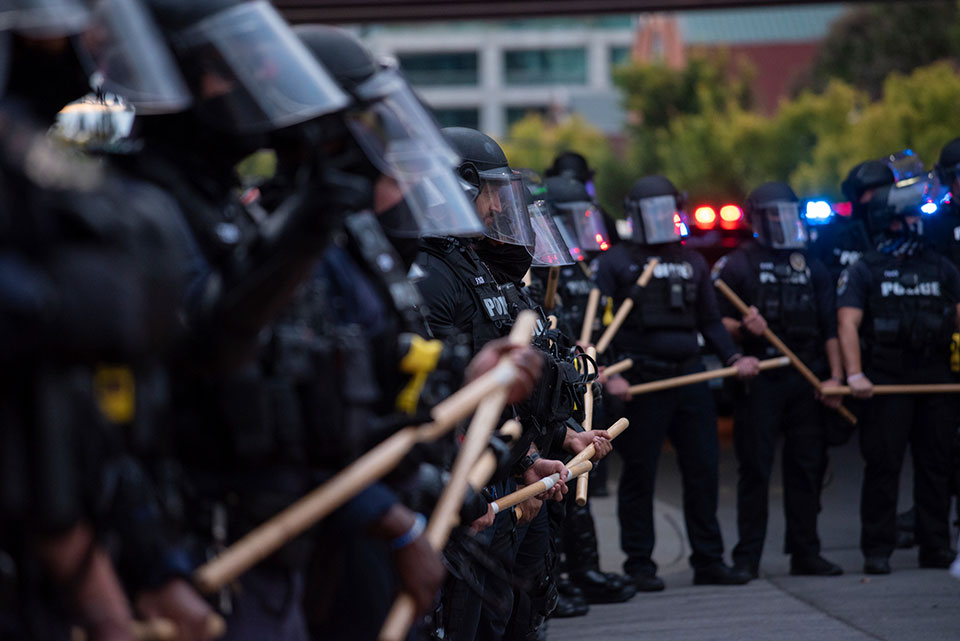 In this Sept. 25, 2020 photo, a line of police officers block protesters in Louisville, Ky. Most police officers who violate citizens’ rights get away with it because the law is heavily stacked in their favor, legal experts say. (Isabel Miller via AP)

One big victory for the police unions in New York was passage of a 1976 provision of the New York Civil Right Act, 50a, which closed records of police misconduct. The argument was that the law protected the civil rights of police officers by shielding them from harassment for frivolous complaints.

In another victory in 1973, Maryland became the first of 16 states that adopted a Law Enforcement Bill of Rights, extending procedural protections to officers that made it difficult to discipline them. Typically these bills of rights delayed internal investigations, expunged old records of misconduct and required that officers instead of civilians investigate complaints. The bill of rights was blamed for hindering the 2015 investigation of the death of Freddie Gray who suffered a spinal injury in police custody in Baltimore.

Last year New York repealed 50a and this year Maryland repealed the police bill of rights.

When New York’s records finally were opened to the public this spring, the database included 323,911 records involving 81,550 current or former New York Police Department officers. About 20,000 had five or more substantiated cases. Yet only 12 of the 20,000 were forced out of the department.

Harris, the Pitt law professor, says the release of police misconduct records is a key to reform. “You can’t have real accountability with the public unless you are willing to share information with the public,’ he said.

Harris says one big impetus toward police reform is the election of so-called “progressive prosecutors” around the country, from Philadelphia, Baltimore and Boston to St. Louis, Chicago and Kansas City, Mo., to San Francisco.

“What they want to do,” says Harris, “is limit using cash bail, reduce prosecution of minor offenses like drugs and sex work, increase the use of diversion programs and establish conviction integrity units” to uncover wrongful convictions.

Some of these progressive prosecutors have ended up in pitch battles with police unions, often controlled by white officers.

One practice in particular has led to conflict - the so-called Brady lists of officers whose prior conduct and untruthfulness in investigations prevent them from testifying. St. Louis has a list of 55. Philadelphia’s District Attorney Larry Krasner found a “damaged goods” file of tainted officers when he took over. Now his “do not call list” has been reported as 215 with another 500 in a misconduct database. Baltimore’s is about 300.

The head of the Fraternal Order of Police in Philadelphia complained of “lost wages, damages to reputation and professional harm” when prosecutors release names of officers they will not call to the stand. “Are they going to be vilified forever, are they going to be blackballed forever?” said John McNesby the union president. McNesby referred to Krasner supporters as a “lynch mob” of criminals.

St. Louis Police Officers Association business manager Jeff Roorda has called progressive St. Louis prosecutor Kim Gardner the worst prosecutor in the country who should be removed either “by force or by choice.”

The calls to defund and abolish the police that followed Floyd’s death ended up backfiring politically when Trump was able to use the proposals as a political cudgel against Democrats. Exit polls showed the attack was effective.

But a handful of states have passed major reform bills in the past year and the number is growing. 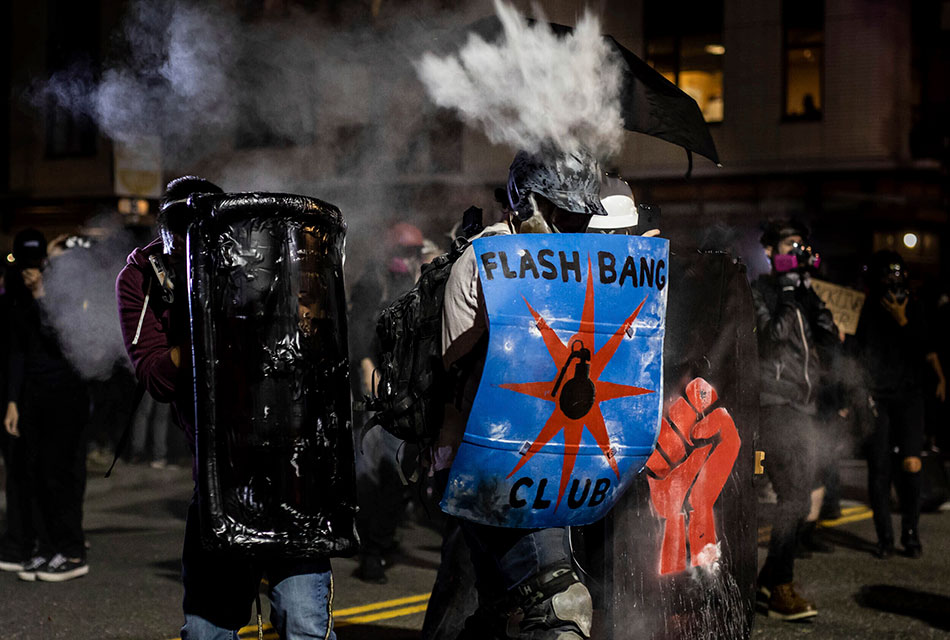 In this Aug. 19, 2020 photo, a protester is hit in the head with projectile fired by a law enforcement officer outside of the U.S. Immigration and Customs Enforcement building in Portland, Ore. Most police officers who violate citizens’ rights get away with it because the law is heavily stacked in their favor, legal experts say. (Maranie Rae Staab via AP)

Not all of the state reforms are as sweeping as advertised. The new Illinois law, trumpeted as one of the most sweeping, included a last-minute amendment that closed the state misconduct database to the public and even the courts. On page 669, the law says the database and documents involving misconduct “shall be confidential by law and privileged, shall not be subject to subpoena, and shall not be subject to discovery or admissible in evidence in any private civil action.”

Pro-police measures are passing in some redder states. Florida has stiffened penalties for crimes during demonstrations, such as mob intimidation and defacing property and monuments. Iowa, which unanimously restricted the use of choke holds after Floyd’s death, is passing a police bill of rights and providing police more legal protection for officers. Kentucky made it a crime to insult or taunt a police officer.

The U.S. House passed a bill that would roll back many of the legal roadblocks. Harris, the Pitt police expert, says “that bill would be extraordinarily good across the board. It beefs up what the government can do with pattern or practice. It cuts into qualified immunity that really has to go because it lets really cruel police actions go unpunished when there hasn’t been a prior court ruling about that particular cruel practice.”

Prospects in the Senate are uphill, although after the Chauvin verdicts there were reports that Democrats were negotiating with Sen. Tim Scott, R-S.C.

Harris says, “There can be change even if it’s not national.” If Congress can’t pass a federal law, he says, it will be up to state and local governments to pass reforms that limit police use of force, increase transparency and improve accountability.