Chauvin GUILTY of 3 Charges of Murder, Manslaughter in Floyd's Death 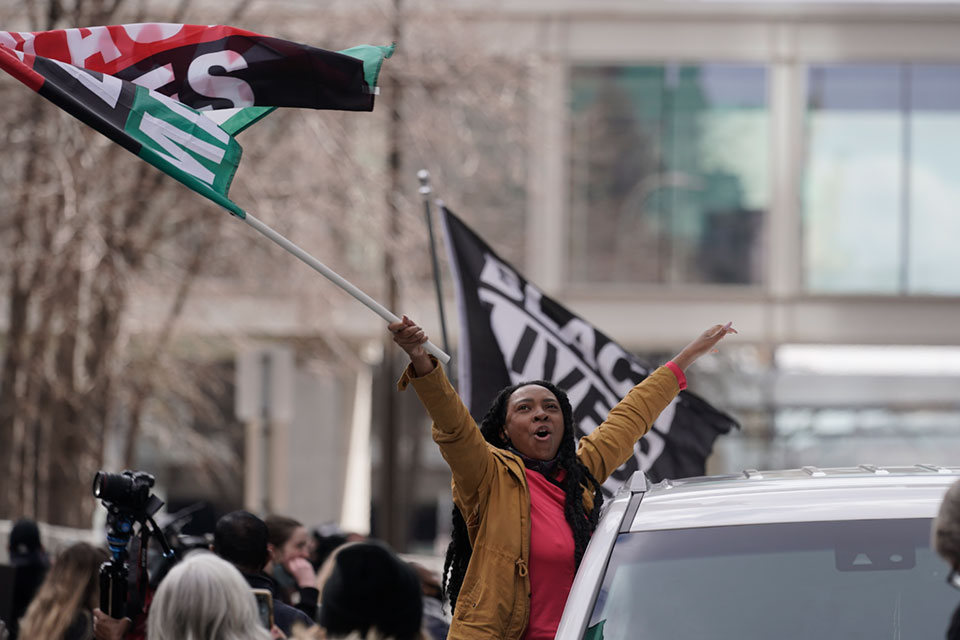 MINNEAPOLIS (AP) — The jury reached a verdict Tuesday at the murder trial of former Officer Derek Chauvin in the death of George Floyd, the Black man who was pinned to the pavement with a knee on his neck in a case that set off a furious reexamination of racism and policing in the U.S.

The verdict, arrived at after about 10 hours of deliberations over two days, was to be read late in the afternoon in a city on edge against the possibility of more unrest like that that erupted last spring.

The courthouse was ringed with concrete barriers and razor wire, and thousands of National Guard troops and law enforcement officers were brought in ahead of the verdict. Some businesses boarded up with plywood.

Floyd died last May after Chauvin, a 45-year-old now-fired white officer, pinned his knee on or close to the 46-year-old Black man’s neck for about 9 1/2 minutes as Floyd gasped that he couldn't breathe and onlookers yelled at Chauvin to get off.

The jury, made up of six white people and six Black or multiracial people, weighed charges of second-degree unintentional murder, third-degree murder and second-degree manslaughter, with convictions on some, none or all of the charges possible. The most serious charge carries up to 40 years in prison.

His face was obscured by a COVID-19 mask, and little reaction could be seen beyond his eyes darting around the courtroom.

His bail was immediately revoked and he was led away with his hands cuffed behind his back. 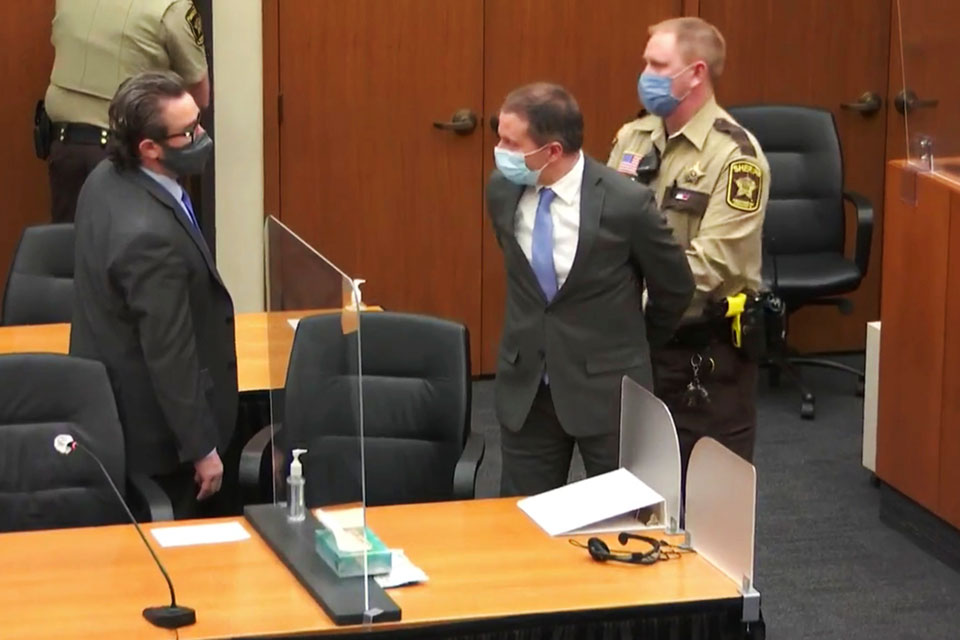 In this image from video, former Minneapolis police Officer Derek Chauvin, center, is taken into custody as his attorney, Eric Nelson, left, looks on, after the verdicts were read at Chauvin's trial for the 2020 death of George Floyd, Tuesday, April 20, 2021, at the Hennepin County Courthouse in Minneapolis, Minn. (Court TV via AP, Pool)As the judge asked jurors if they reached a verdict inside, a hush fell on the crowd 300 strong in a park adjacent to the courthouse outside, with people listening to the proceedings on their cellphones. When the final guilty verdict was announced, the crowd roared, many people hugging, some shedding tears.

At the intersection where Floyd was pinned down, a crowd chanted, “One down, three to go!” — a reference to the three other fired Minneapolis police officers facing trial in August on charges of aiding and abetting murder in Floyd's death.

Janay Henry, who lives nearby, said she felt grateful and relieved.

“I feel grounded. I can feel my feet on the concrete," she said, adding that she was looking forward to the “next case with joy and optimism and strength.”

An ecstatic Whitney Lewis leaned halfway out a car window in a growing traffic jam of revelers waving a Black Lives Matter flag. “Justice was served,” the 32-year-old from Minneapolis said.

Prosecutor Jerry Blackwell, who pounded away at Chauvin's witnesses during the trial, said the verdict sends a message to Floyd's family “that he was somebody, that his life matters.”

Minnesota Attorney General Keith Ellison commended the bystanders at Floyd's slow-motion death who "raised their voices because they knew that what they were seeing was wrong,” and then ”told the whole world" what they saw.

Ellison read off the names of others killed in encounters with police and said: “This has to end. We need true justice. That’s not one case. That’s social transformation that says no one is beneath the law and no one is above it.”

The verdict was read in a courthouse ringed with concrete barriers and razor wire and patrolled by National Guard troops, in a city on edge against another round of unrest — not just because of the Chauvin case but because of the deadly police shooting of a young Black man, Daunte Wright, in a Minneapolis suburb April 11. 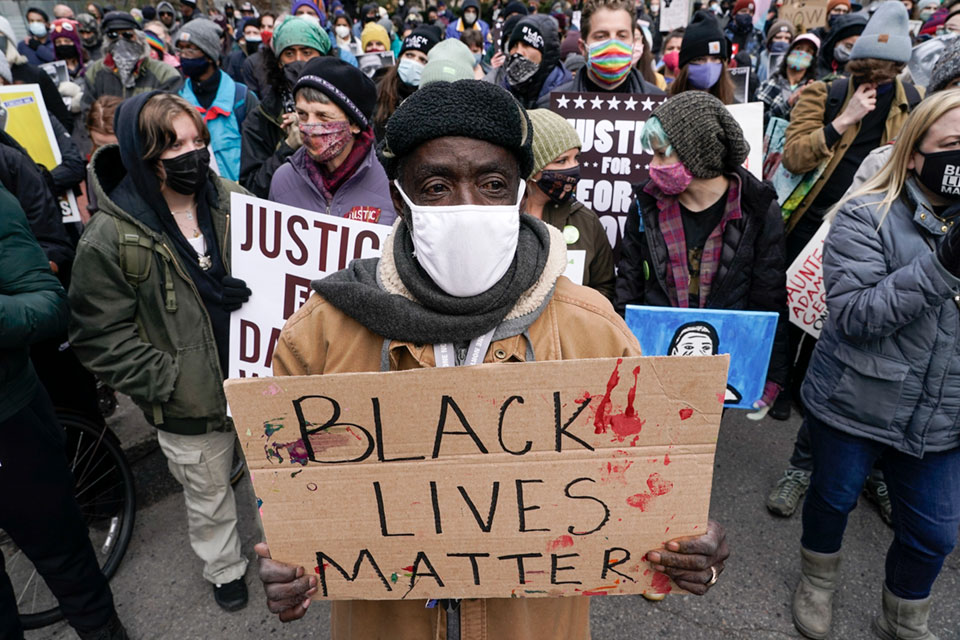 Frederick King listens to a speaker at a rally Monday, April 19, 2021, in Minneapolis as the murder trial against the former Minneapolis police officer Derek Chauvin in the killing of George Floyd advances to jury deliberations. (AP Photo/Morry Gash)The jurors identities were kept secret and will not be released until the judge decides it is safe to do so.

The city has been on edge in recent days — not just over the Chauvin case but over the deadly police shooting of a 20-year-old Black man, Daunte Wright, in the nearby Minneapolis suburb of Brooklyn Center on April 11.

The President weighs in

Earlier in the day Tuesday, President Joe Biden weighed in by saying he believes the case is “overwhelming.”

He said that he had spoken to Floyd’s family on Monday and “can only imagine the pressure and anxiety they’re feeling.”

“They’re a good family and they’re calling for peace and tranquility no matter what that verdict is,” Biden said.

“I’m praying the verdict is the right verdict.

"I think it’s overwhelming, in my view. I wouldn’t say that unless the jury was sequestered now.”

The president has repeatedly denounced Floyd’s death but previously stopped short of commenting on the trial itself.

Other politicians and ordinary citizens also offered their opinion as the jury was deliberating.

“It shouldn’t be really even questioned whether there will be an acquittal or a verdict that doesn’t meet the scale of the crime that was committed,” Rep. Ilhan Omar, a Democrat, said in Brooklyn Center. The congresswoman said the Chauvin case looks open-and-shut.

Guilty verdicts could mark a turning point in the fight for racial equality, she said.

“We are holding on to one another for support. Hopefully this verdict will come soon and the community will start the process of healing,” Omar said.

Floyd, 46, died May 25 after being arrested on suspicion of passing a counterfeit $20 bill for a pack of cigarettes at a corner market. He panicked, pleaded that he was claustrophobic and struggled with police when they tried to put him in a squad car. They put him on the ground instead. 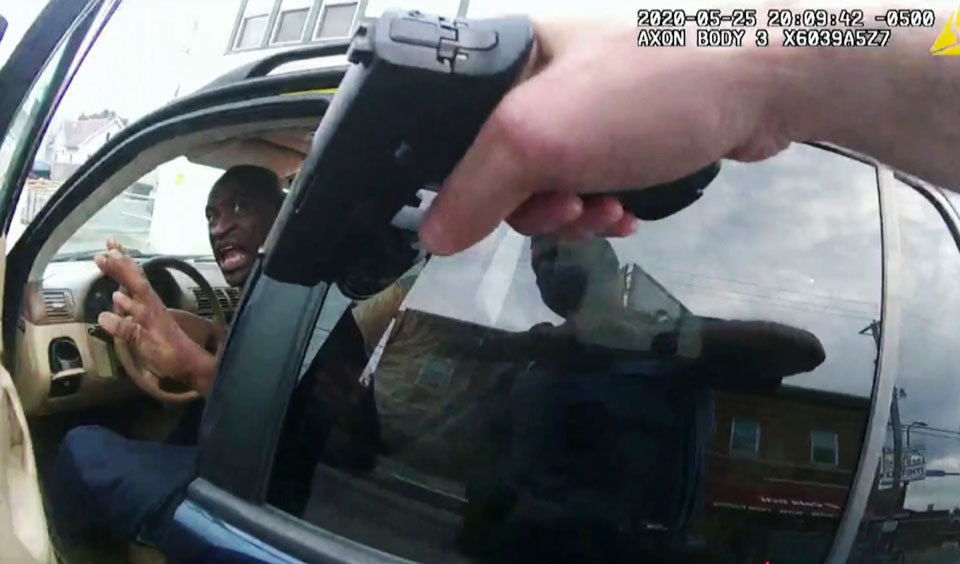 In this image from police body camera video George Floyd responds to police after they approached his car outside Cup Foods in Minneapolis, on May 25, 2020. The image was shown as prosecutor Steve Schleicher gave closing arguments while Hennepin County Judge Peter Cahill presided Monday, April 19, 2021, at the Hennepin County Courthouse in Minneapolis, in the trial of former Minneapolis police Officer Derek Chauvin, who is charged in the May 25 death of Floyd. (Court TV via AP, Pool)The centerpiece of the case was the excruciating bystander video of Floyd gasping repeatedly, “I can’t breathe” and onlookers yelling at Chauvin to stop as the officer pressed his knee on or close to Floyd’s neck for what authorities say was 9 1/2 minutes. Floyd slowly went silent and limp.

Prosecutors played the footage at the earliest opportunity, during opening statements, with Jerry Blackwell telling the jury:

And it was shown over and over, analyzed one frame at a time by witnesses on both sides.

In the wake of Floyd’s death, demonstrations and scattered violence broke out in Minneapolis, around the country and beyond. The furor also led to the removal of Confederate statues and other offensive symbols such as Aunt Jemima.

In the months that followed, numerous states and cities restricted the use of force by police, revamped disciplinary systems or subjected police departments to closer oversight.

The “Blue Wall of Silence” that often protects police accused of wrongdoing crumbled after Floyd’s death: The Minneapolis police chief quickly called it “murder” and fired all four officers, and the city reached a staggering $27 million settlement with Floyd’s family as jury selection was underway.

Police-procedure experts and law enforcement veterans inside and outside the Minneapolis department, including the chief, testified for the prosecution that Chauvin used excessive force and went against his training.

Medical experts for the prosecution said Floyd died of asphyxia, or lack of oxygen, because his breathing was constricted by the way he was held down on his stomach, his hands cuffed behind him, a knee on his neck and his face jammed against the ground.

Chauvin attorney Eric Nelson called a police use-of-force expert and a forensic pathologist to help make the case that Chauvin acted reasonably against a struggling suspect and that Floyd died because of an underlying heart condition and his illegal drug use.

Floyd had high blood pressure, an enlarged heart and narrowed arteries, and fentanyl and methamphetamine were found in his system.

Under the law, police have certain leeway to use force and are judged according to whether their actions were “reasonable” under the circumstances.

The defense also tried to make the case that Chauvin and the other officers were hindered in their duties by what they perceived as a growing, hostile crowd.

Chauvin did not testify, and all that the jury or the public ever heard by way of an explanation from him came from a police body-camera video after an ambulance had taken the 6-foot-4, 223-pound Floyd away. Chauvin told a bystander: “We gotta control this guy ’cause he’s a sizable guy ... and it looks like he’s probably on something.”

The prosecution’s case also included tearful testimony from onlookers who said the police kept them back when they protested what was happening. Eighteen-year-old Darnella Frazier, who shot the crucial video, said Chauvin just gave the bystanders a “cold” and “heartless” stare.

She and others said they felt a sense of helplessness and lingering guilt from witnessing Floyd’s slow-motion death. 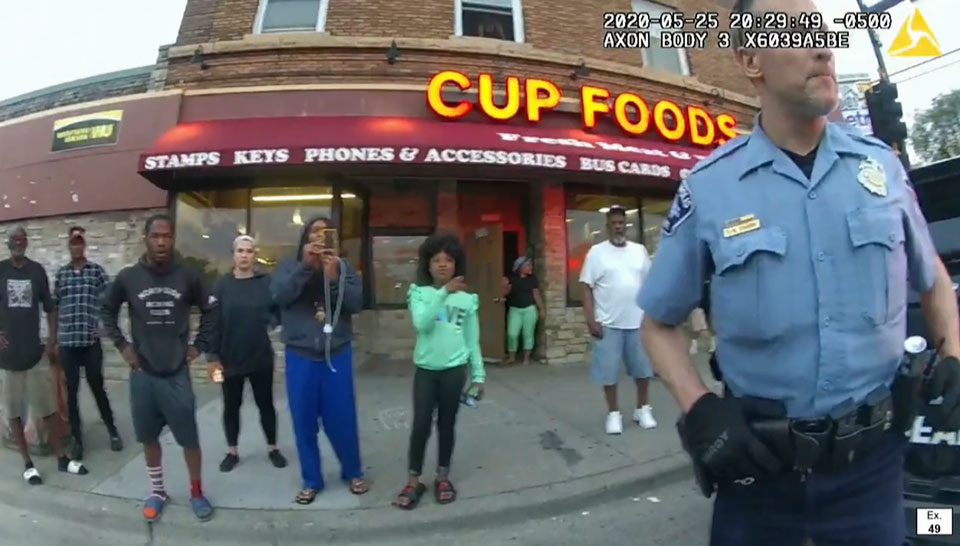 In this image from police body camera video former Minneapolis police Officer Derek Chauvin stands outside Cup Foods in Minneapolis, on May 25, 2020, with a crowd of onlookers behind him. The image was shown as prosecutor Steve Schleicher gave closing arguments as Hennepin County Judge Peter Cahill presided Monday, April 19, 2021, at the Hennepin County Courthouse in Minneapolis, in the trial of Chauvin who is charged in the May 25 death of George Floyd. (Court TV via AP, Pool)“It’s been nights I stayed up, apologizing and apologizing to George Floyd for not doing more, and not physically interacting and not saving his life,” Frazier testified, while the 19-year-old cashier at the neighborhood market, Christopher Martin, lamented that “this could have been avoided” if only he had rejected the suspect $20 bill.

To make Floyd more than a crime statistic in the eyes of the jury, the prosecution called to the stand his girlfriend, who told the story of how they met and how they struggled with addiction to opioids, and his younger brother Philonise. He recalled how Floyd helped teach him to catch a football and made “the best banana mayonnaise sandwiches.”