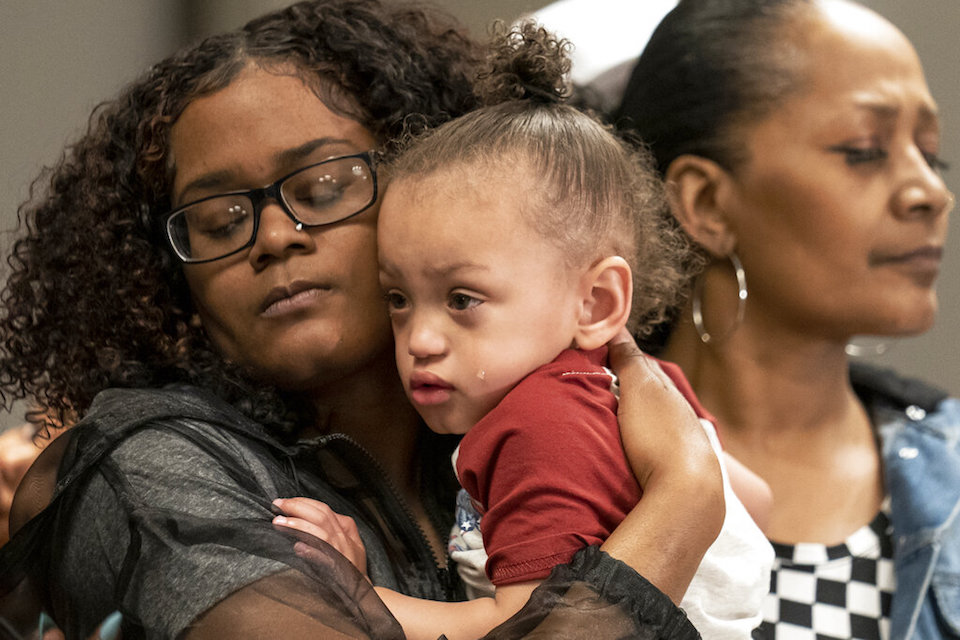 BROOKLYN CENTER, Minn. (AP) — Elected leaders in the Minneapolis suburb where a police officer fatally shot Daunte Wright want officers to scale back their tactics amid nightly protests, leaving some law enforcement called in to assist asking whether the city still wants their help.

Hundreds of demonstrators have gathered outside the heavily guarded Brooklyn Center police station every night since former Officer Kim Potter, who is white, shot the 20-year-old Black motorist during a traffic stop on Sunday.

On Friday night, officers fired irritants into a crowd of several hundred after part of an outer fence was opened. Demonstrators dissipated shortly after 10 p.m. when officers quickly advanced

Children in neighborhood are frightened

Flash bangs and sponge grenades were fired into the crowd, and several protesters who neared a group of officers were pepper sprayed. Some demonstrators scrambled through yards and over backyard fences to evade a perimeter authorities set up for a block around the police department.

People who live in the area have said many neighbors are staying in hotels or with relatives to avoid the noise as well as the tear gas that seeps into their homes.

“We can’t just have our window open any more without thinking about if there’s going to be some gas coming in,” said 16-year-old Xzavion Martin, adding that rubber bullets and other projectiles have landed on his apartment's second-story balcony.

“There’s kids in this building that are really scared to come back.”

The tactics have not sat well with Brooklyn Center city officials, who passed a resolution Monday banning the city’s officers from using tear gas and other chemicals, chokeholds, and police lines to arrest demonstrators.

Mayor Mike Elliott, who is Black, said at a news conference Wednesday that “gassing is not a human way of policing” and he didn’t agree with police using pepper spray, tear gas and paintballs against demonstrators. Elliott didn’t respond to multiple messages from the Associated Press earlier Friday.

But Brooklyn Center police aren’t dealing with protesters on their own. Other agencies, including the Hennepin County Sheriff’s Department and the Minnesota National Guard, have provided support at the city’s request in a joint effort dubbed Operation Safety Net. The city’s resolution isn’t binding on those agencies.

Protests have continued since Potter was charged Wednesday with second-degree manslaughter. The former police chief in the majority nonwhite suburb said Potter fired her pistol when she meant to use her Taser, but protesters and Wright's family say there's no excuse for the shooting. Both Potter and the chief resigned Tuesday.

Sheriff David Hutchinson asked Elliott in a letter Wednesday to clarify whether he still wanted the department’s help. The mayor wrote in a letter Thursday that his city still needs help but pressed assisting agencies not to engage with protesters.

“It is my view that as long as protesters are peaceful and not directly interacting with law enforcement, law enforcement should not engage with them,” Elliott wrote. "Again, this is a request and not an attempt to limit necessary law enforcement response.”

Sheriff's spokesman Jeremy Zoss said Friday that no agencies had pulled out of Brooklyn Center. Scott Wasserman, a spokesman for the state Department of Public Safety, said Operation Safety Net's tactics will not change.

Gov. Tim Walz, a Democrat and commander-in-chief of the Minnesota National Guard, said at a Thursday news conference that he’s concerned about tactics but that police are trying to protect the community.

And On Friday, transcripts were released showing that a grand jury investigating the police suffocation death of Daniel Prude last year in Rochester, New York, voted 15-5 not to charge the three officers involved in his restraint.

Walz told reporters that protesters might have burned down the police station and other buildings if police hadn't intervened — a lesson he says he learned after a Minneapolis police station burned during protests last year over Floyd's death. Those demonstrations damaged more than 1,000 buildings across the Twin Cities area.

“I trust our safety officials to be very judicious and think about this,” Walz said.

Police say Wright was pulled over for expired tags, but they sought to arrest him after discovering he had an outstanding warrant. The warrant was for his failure to appear in court on charges that he fled from officers and possessed a gun without a permit during an encounter in June with Minneapolis police.

Body camera video shows Wright struggling with police after they say they’re going to arrest him. Potter, a 26-year veteran, pulls her service pistol and is heard repeatedly yelling “Taser!” before firing. She then says, “Holy (expletive), I shot him.”

Mohamed Ibrahim is a corps member for the Associated Press/Report for America Statehouse News Initiative. Report for America is a nonprofit national service program that places journalists in local newsrooms to report on undercovered issues.