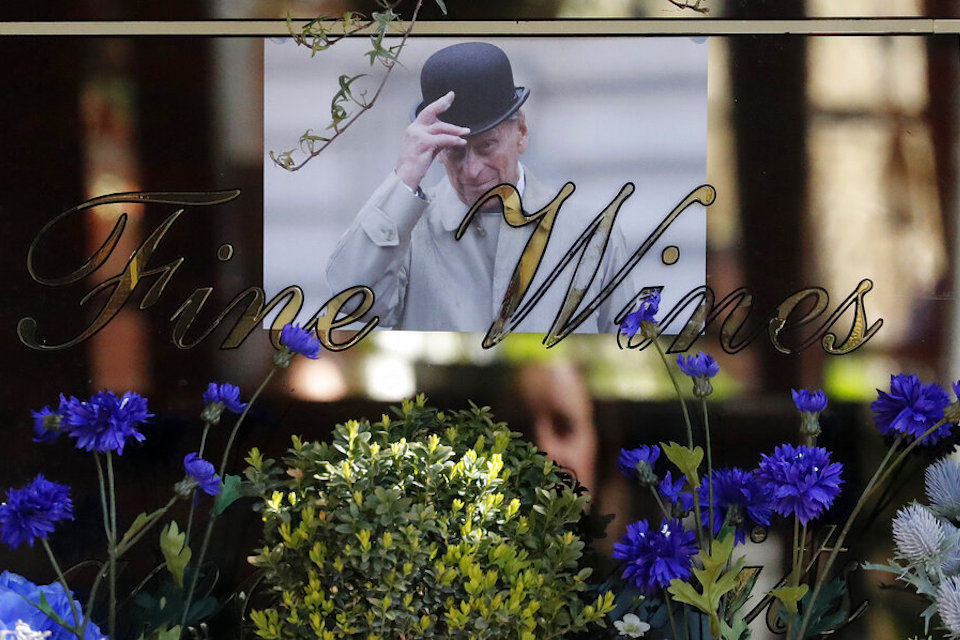 WASHINGTON (AP) — Throughout his decades in public life, Prince Philip was known for putting his royal foot in his mouth with occasional off-the-cuff remarks that could be embarrassing. But his faux pas at a White House dinner with President Richard Nixon in 1969 was enough for Philip to actually lose sleep.

In a handwritten note to the president uncovered by archivists at the Richard Nixon Presidential Library and Museum in Yorba Linda, California, the Duke of Edinburgh wrote to “humbly apologize" for failing to toast the president's health as dictated by protocol during a “stag” dinner in his honor.

"After the brilliance of the other speakers and yourself, I am afraid my contribution was very lame,” Philip wrote to Nixon from Greenland on Nov. 7 after his solo U.S. trip had concluded. He added: “That night I woke up in a cold sweat when I realized I had forgotten to propose your health!” 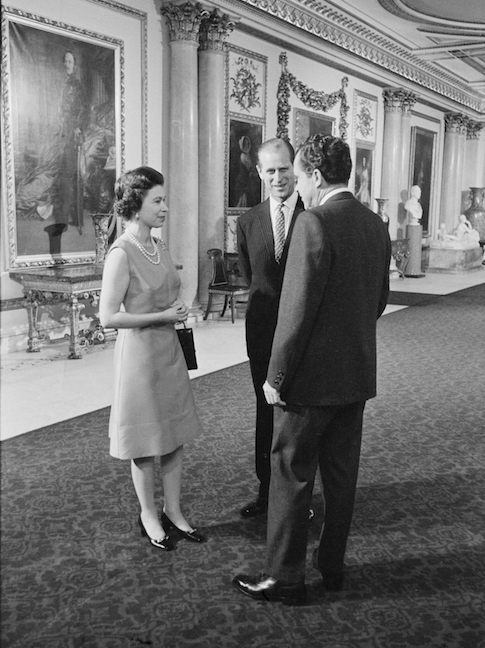 Philip died last week at age 99, and his funeral is Saturday. He was married to Queen Elizabeth for 73 years.

“I think the letter itself shows the character of Prince Philip that so much of the public in the U.K. and across the Commonwealth, and really across the world, have come to admire,” said Jim Byron, executive vice president of the Nixon Foundation.

He said the letter was discovered before the coronavirus pandemic but made public this week, as a way of marking Philip's death.

“It expresses some private feelings of a moment in time that the public really doesn’t always get a chance to see,” Byron added.

Known for his quick wit and willingness to be self-deprecating, Philip's brand of cheekiness didn't always go over well, and sometimes veered into racism.

In 1995, he asked a Scottish driving instructor, “How do you keep the natives off the booze long enough to pass the test?” Seven years later in Australia, when visiting Aboriginal people with the queen, he asked: “Do you still throw spears at each other?”

While visiting a military barracks, Philip asked a sea cadet instructor if she worked in a strip club, and even said to a woman who had lost two sons in a fire that smoke detectors were "a damn nuisance. I’ve got one in my bathroom, and every time I run my bath, the steam sets it off.”

During White House dinners, honored guests usually offer a toast to the president's health and success. Philip wrote to Nixon that he couldn't “begin to tell you how much I appreciated your very great kindness and hospitality at the White House. I was quite overwhelmed by the guests but delighted to meet such a distinguished company.”

He mentioned having then traveled to New York, where he was interviewed by Barbara Walters for NBC's “Today" show.

“The weather in New York was horrible but otherwise all went well,” Philip wrote, “and I found Miss Walters particularly charming and intelligent. I hope we did a good piece.”

The long guest list for the dinner was all-male. It included Vice President Spiro Agnew, most of the members of Nixon's Cabinet and nongovernmental notables like business magnate Ross Perot and Britain-born comedian Bob Hope. 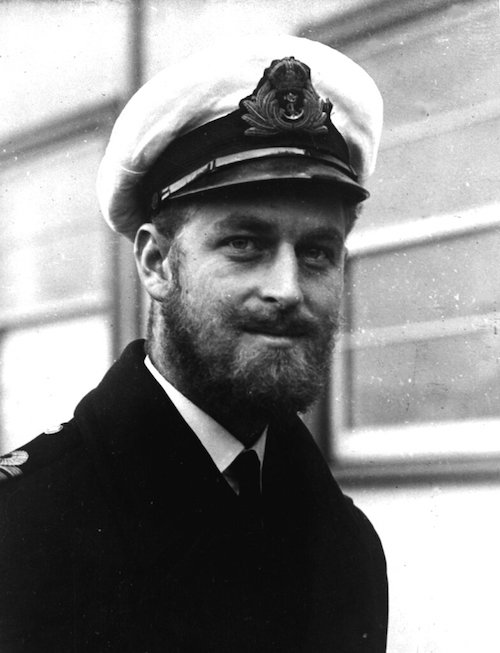 Byron said Nixon almost certainly replied to Philip's letter, but, with the library archives remaining closed because of the pandemic, what he might have said is unknown. What Philip said in his remarks — other than omitting wishing Nixon good health — is unknown for the same reason.

Nixon, who died at age 81 in 1994, was a bit older than Philip, but the two had known each other for years by then. As vice president, Nixon and his wife met with Queen Elizabeth and Philip in London.

The Nixons gave the royal couple a tour of Washington's sites when they made a state visit to the U.S. in 1959.

“Philip, by all measures, he was being kind," Byron said of the letter. “And really expressing so much of his character.”

PHOTO: Prince Philip of Greece, Britain's Duke of Edinburgh, during a naval visit to Melbourne, Australia, August 29 1945, Prince Philip who died Friday April 9, 2021, aged 99, lived through a tumultuous century of war and upheavals, but he helped forge a period of stability for the British monarchy under his wife, Queen Elizabeth II. Philip joined the Royal Navy and saw action during World War II on battleships in the Indian Ocean, the Mediterranean and the Pacific. (AP Photo, FILE)

Born into an age of revolutions in the wake of a pandemic, Prince Philip lived through a tumultuous century and worked to make the British monarchy a rock of stability in changing times.

He bore witness to — and participated in — many of the century’s upheavals: World War II, the dismantling of the British Empire and the rise and fall of nations during and after the Cold War.

He helped anchor the monarchy with his wife, Queen Elizabeth II, but died last week at 99 with the United Kingdom still unsettled by its exit from the European Union, and in a world of growing nationalism and extremes.

Philip was born in Corfu as a prince of Greece and Denmark. When he was a toddler, his family had to flee Greece after a coup. The British Navy rescued the family reportedly bringing Philip onto the ship in an orange crate. Monarchies across Europe were being toppled as societies faced upheaval in the aftermath of World War I and the deadly influenza pandemic that followed.

His grandfather, King George of Greece, had been assassinated eight years before Philip’s birth, and his royal Romanov relatives in Russia were slain after the czar's abdication and the Bolshevik Revolution of 1917.

“It was a time when a lot of what had seemed like very stable institutions and countries were simply disappearing,” MacMillan said. “There was a lot of fear that what had happened in Russia was going to spread around the world.”

Historian Ed Owens said Philip’s early years “are key to informing how he sees monarchy for the rest of his life.”

He said Philip saw monarchy “as something that isn’t necessarily permanent, that must be kept popular.”

Raised by relatives in Britain, Philip joined the Royal Navy and saw action in World War II on battleships in the Indian Ocean, the Mediterranean and the Pacific. European royalty found itself divided by the war: Two of Philip’s sisters had German husbands who served on the Nazi side.

He had a ringside seat for the end of the conflict. Philip’s ship was in Tokyo Bay for the formal Japanese surrender aboard USS Missouri on Sept. 2, 1945, and he watched the ceremony through binoculars.

In 1947, Philip married Britain’s Princess Elizabeth, who as the elder daughter of King George VI was destined to be queen.

British historian Simon Schama said that coming from “a Europe where nothing seemed stable,” Philip embraced the solidity offered by Britain’s monarchy and its role as neutral pillar of public life, above the political fray.

“When he found his way into British life … he wasn’t just embracing a royal family, he was embracing an institution, that of constitutional monarchy,” Schama told the BBC.

When Elizabeth became queen at age 25 in 1952, Philip gave up his naval career and dedicated himself to supporting her.

Britain, though victorious in the war, was an indebted and declining power whose colonies were breaking free. Philip helped create the Commonwealth group of nations, with the queen at its head, to try to bind Britain and its former colonies together on a more equal footing.

Commonwealth Secretary-General Patricia Scotland said in a tribute that Philip sought to bring the “camaraderie and comradeship” he had experienced as a wartime sailor into relations between countries, “so that they would reap the dividends of collaboration in peacetime too.”

The royal couple covered 40,000 miles touring the Commonwealth in 1953, the first of many trips to the organization’s now 54 member nations.

“His Royal Highness had a farsighted understanding of the potential of Commonwealth connection, and his approaches to bringing people together from a wide range of backgrounds to develop leadership skills were regarded as innovative and brave,” Scotland said.

In Britain, Philip helped steer the monarchy through decades of declining social deference into a mass-media world where people demand intimacy from their icons.

He was instrumental in ensuring the queen’s coronation was televised. Many British families bought TV sets just for the occasion, and it became the country’s first mass television spectacle.

“Very early on, he saw the … positive benefits of mass media as a way of enhancing the monarchy’s public image,” Owens said.

“There’s been a lot of talk about Philip as quite a sort of old-fashioned presence, certainly at the end of his life. But actually, from the moment he becomes a British royal in 1947, he’s a real modernizing force.”

Philip was also an early environmentalist and a champion of technology. Prime Minister Boris Johnson noted Monday that Philip was “one of the first people in this country to use a mobile phone.” In his late 90s, he was making Zoom calls on a laptop, according to his grandson, Prince Harry.

The Queen is universally beloved in Britain

The decades brought family troubles, played out in public: the divorces of three of Philip and the queen’s four children; the death of Princess Diana in 1997; Prince Andrew’s friendship with Jeffrey Epstein, an American financier who died in a New York prison in 2019 while awaiting trial on sex trafficking charges; and the self-exile of Prince Harry and his wife, Meghan, amid allegations of racism both from the media and within the royal household.

Yet almost 70 years after Elizabeth became queen, she is a beloved figure — the only monarch most Britons have known — and republicanism is favored by a small minority in the country. The monarchy appears to be safe.

But with Britain facing an uneasy new relationship with its European neighbors, Scottish nationalists pushing for an independence vote and Brexit shaking the peace process in Northern Ireland, the future of both crown and country is uncertain. The queen is 94, and some day will be succeeded by her son, Prince Charles, a far less-popular royal.