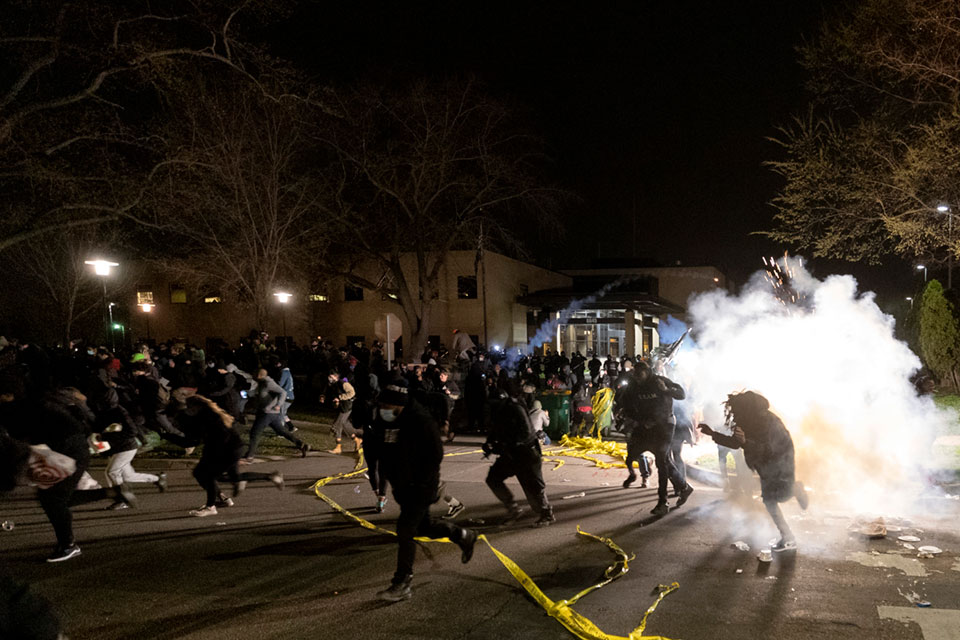 BROOKLYN CENTER, Minn. (AP) — A Black man died after being shot by police in a Minneapolis suburb during a traffic stop and crashing his car several blocks away, sparking violent protests that lasted into the early hours Monday as officers in riot gear clashed with demonstrators and the man’s mother called for calm.

The man was identified by family as 20-year-old Daunte Wright, and he died Sunday in a metropolitan area already on edge and midway through the trial of the first of four police officers charged in George Floyd’s death. Minnesota Gov. Tim Walz tweeted he was praying for Wright’s family “as our state mourns another life of a Black man taken by law enforcement.” 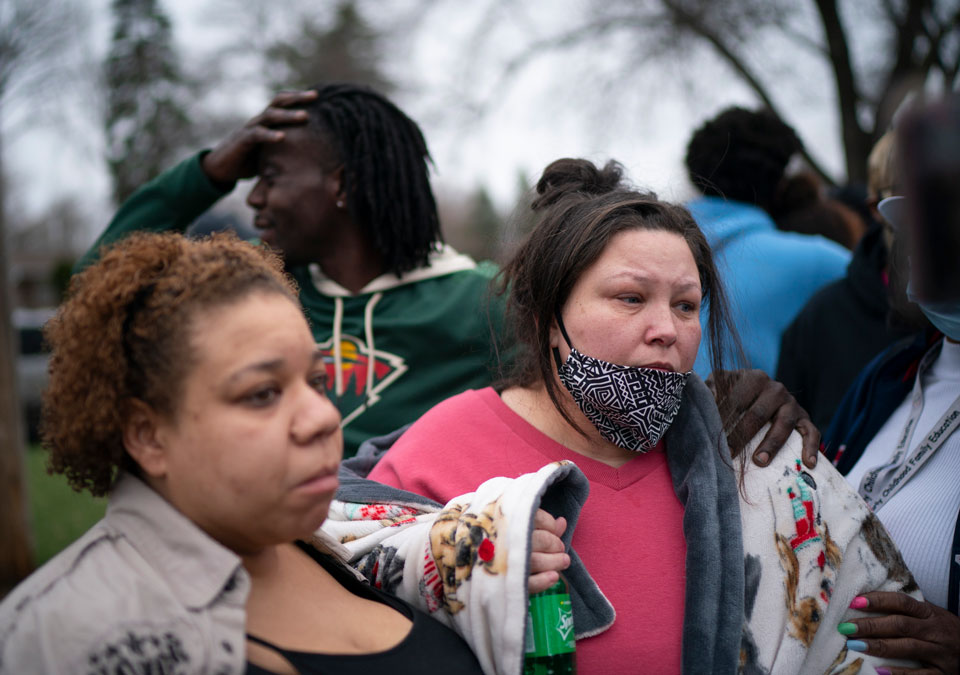 Friends and family comfort Katie Wright, right, while she speaks briefly to news media near where the family says her son Daunte Wright, 20, was shot and killed by police Sunday, April 11, 2021, in Brooklyn Center, Minn. (Jeff Wheeler/Star Tribune via AP)Speaking before the confrontation in Brooklyn Center between protesters and law enforcement, Daunte’s mother, Katie Wright, attempted to curb any unrest.

“All the violence, if it keeps going it’s only going to be about the violence. We need it to be about why my son got shot for no reason,” she said to a crowd near the shooting scene.

“We need to make sure it’s about him and not about smashing police cars, because that’s not going to bring my son back.”

Police didn’t immediately identify Wright, but protesters who gathered near the scene waved flags and signs reading “Black Lives Matter.” Others walked peacefully with their hands held up. On one street, written in multi-colored chalk: “Justice for Daunte Wright.”

Wright killed while attempting to drive away 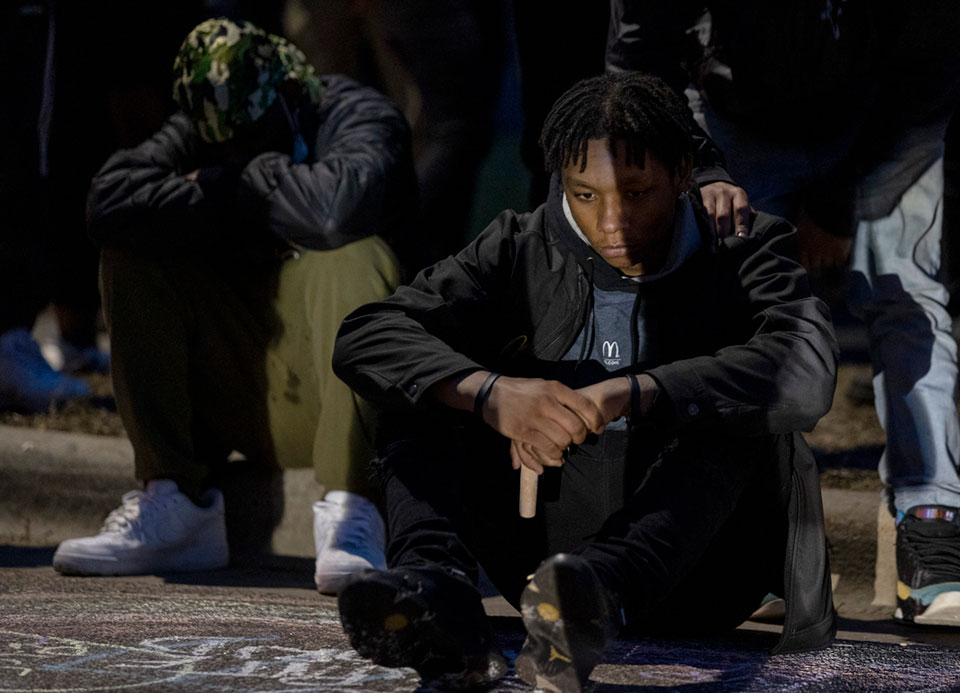 A man sits near a circle around a memorial for Daunte Wright in Brooklyn Center, Minn., Sunday, April 11, 2021. Wright's family told a crowd that he was shot by police Sunday before getting back into his car and driving away, then crashing the vehicle several blocks away. The family said Wright was later pronounced dead. (Carlos Gonzalez/Star Tribune via AP)Brooklyn Center police said in a statement that officers had stopped a motorist shortly before 2 p.m. Sunday. After determining the driver had an outstanding warrant, police tried to arrest the driver. The driver reentered the vehicle and an officer fired, striking the driver, police said. The vehicle traveled several blocks before striking another vehicle.

The account of the shooting from Wright’s family differed, with Katie Wright saying he was shot before getting back into the car.

Court records show Wright was being sought for fleeing from law enforcement officers and for possessing a gun without a permit during an encounter with Minneapolis police in June. In that case, a statement of probable cause said police got a call about a man waving a gun who was later identified as Wright.

Police said the Hennepin County Medical Examiner’s Office will release the name of the person who died Sunday following a preliminary autopsy and family notification. A female passenger sustained non-life-threatening injuries during the crash. Brooklyn Center is a city of about 30,000 people located on the northwest border of Minneapolis.

Katie Wright said that passenger was her son’s girlfriend. Wright said her son called her as he was getting pulled over.

“All he did was have air fresheners in the car and they told him to get out of the car,” Wright said.

During the call, she said she heard scuffling and then someone saying “Daunte, don’t run” before the call ended. When she called back, her son’s girlfriend answered and said he'd had been shot.

Demonstrators gathered after the shooting 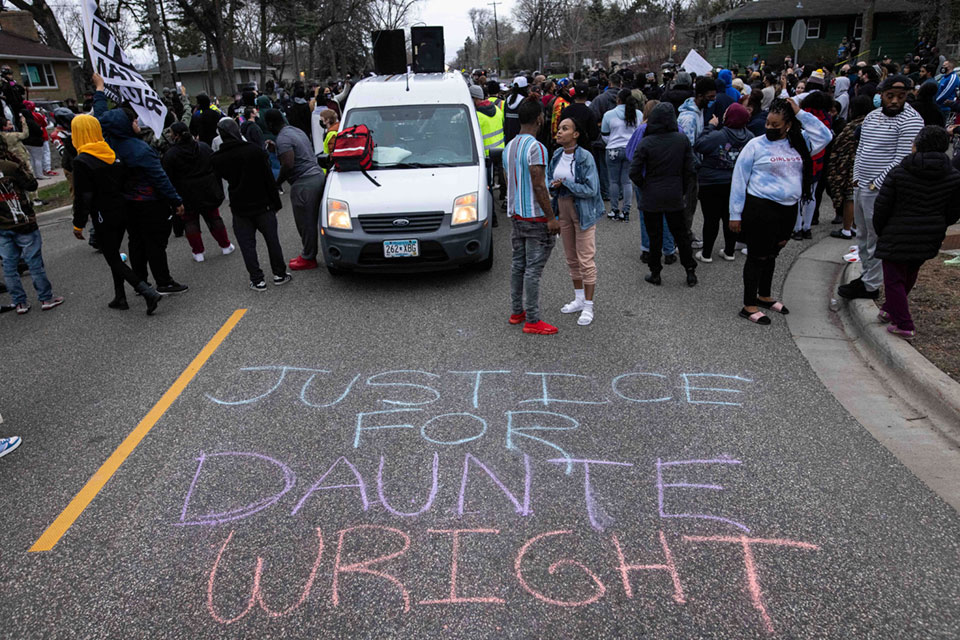 People gather in protest, Sunday, April 11, 2021, in Brooklyn Center, Minn. The family of Daunte Wright, 20, told a crowd that he was shot by police Sunday before getting back into his car and driving away, then crashing the vehicle several blocks away. The family said Wright was later pronounced dead. (AP Photo/Christian Monterrosa)Demonstrators gathered shortly after the shooting and crash, with some jumping on top of police cars and confronting officers. Marchers also descended upon the Brooklyn Center police department building, where rocks and other objects were thrown at officers, Minnesota Department of Public Safety commissioner John Harrington said at a news conference. The protesters had largely dispersed by 1:15 a.m. Monday, he said.

About 20 businesses had been broken into at the city’s Shingle Creek shopping center, Harrington said. Law enforcement agencies were coordinating to tame the unrest, he said, and the National Guard was activated.

Brooklyn Center Mayor Mike Elliott announced a curfew in the city that expired at 6 a.m. Monday. In a tweet he said, “We want to make sure everyone is safe. Please be safe and please go home.”

Police said Brooklyn Center officers wear body-worn cameras and they also believe dash cameras were activated during the incident. The department said it has asked the Bureau of Criminal Apprehension to investigate.

The trial of Derek Chauvin, the former Minneapolis officer charged in Floyd’s death, was slated to continue Monday. Floyd, a Black man, died May 25 after Chauvin, who is white, pressed his knee against Floyd’s neck. Prosecutors say Floyd was pinned for 9 minutes, 29 seconds.

Harrington said more National Guard members and state law enforcement personnel would be deployed around the Twin Cities and in Brooklyn Center in addition to personnel already in place for Chauvin’s trial at the Hennepin County courthouse in Minneapolis.

There was no visible increase in the already high security presence on Monday morning outside the courthouse, which was fortified ahead of Chauvin’s trial with tall fencing topped with barbed wire, coils of razor wire between the fences and concrete barriers. National Guard troops with military vehicles, sheriff’s deputies and county security guards continued to stand watch.

“We are focused on taking steps in the moment. I haven’t entirely processed the tragedy that took place in our community and I’m prioritizing the safety and wellbeing of our students, families, staff members and community members,” Baker said. “We know our community experienced trauma and we need the time and space to process.”