Expert Says Floyd Died From a Lack of Oxygen 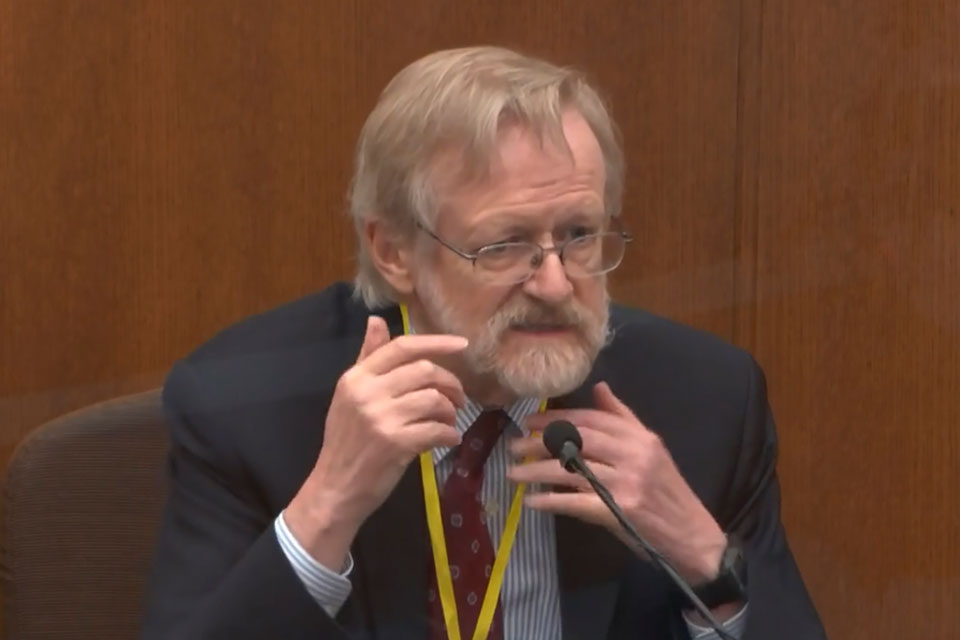 MINNEAPOLIS (AP) — George Floyd died of a lack of oxygen from being pinned facedown on the pavement with his hands cuffed behind him, a medical expert testified Thursday at former Officer Derek Chauvin's murder trial.

Floyd's breathing, while he was being held down by Chauvin and other officers, was too shallow to take in enough oxygen, which in turn damaged his brain and caused an abnormal heart rhythm that made his heart stop, said Dr. Martin Tobin, a lung and critical care specialist at the Edward Hines, Jr. VA Hospital and Loyola University's medical school in Chicago.

He took the stand as part of an effort by prosecutors to establish that it was Chauvin's actions — not Floyd's illegal drug use and underlying health conditions, as the defense contends — that killed the 46-year-old Black man last May.

Tobin, analyzing a graphic presentation of the three officers pinning Floyd for what prosecutors say was almost 9 1/2 minutes, said Chauvin’s knee was “virtually on the neck for the vast majority of time.” He said it was “more than 90% of the time in my calculations.”

He said it appeared that Floyd was getting enough oxygen for about the first five minutes to keep his brain alive because he was still speaking.

But Tobin explained to jurors what happens as the space in the airway narrows, saying breathing then becomes “enormously more difficult,” adding that it would be worse than “breathing through a drinking straw.” 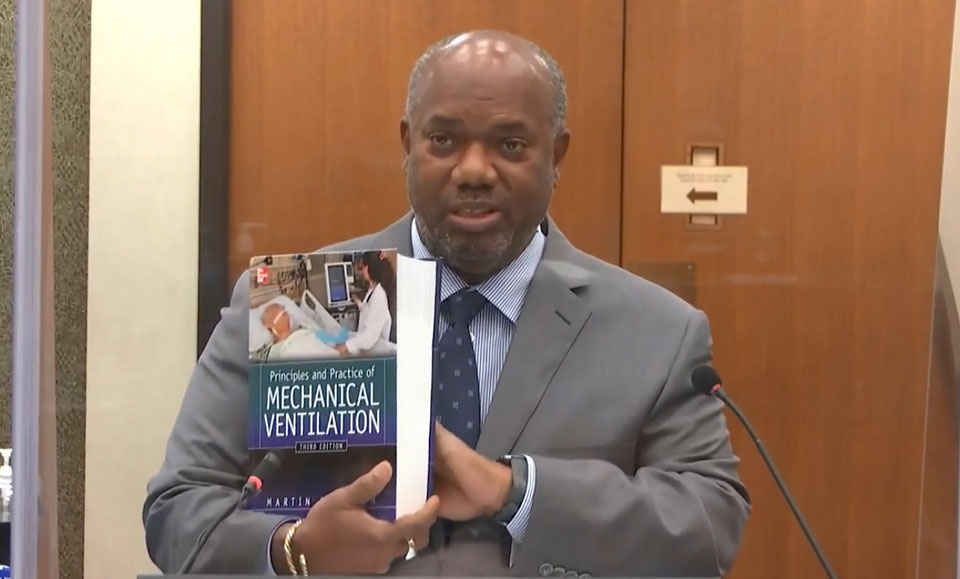 In this image from video, prosecutor Jerry Blackwell questions Dr. Martin Tobin as Hennepin County Judge Peter Cahill presides Thursday, April 8, 2021, in the trial of former Minneapolis police Officer Derek Chauvin at the Hennepin County Courthouse in Minneapolis, Minn. Chauvin is charged in the May 25, 2020 death of George Floyd. (Court TV via AP, Pool)Tobin testified that if the hypopharynx – the bottom part of the throat -- becomes totally obstructed, it takes just seconds to reduce the level of oxygen to where it would result “in either a seizure or a heart attack.”

Prosecutors showed images of Floyd side by side, one with the front of his face smashed against the pavement and another with his head turned. Tobin said that when Floyd’s head was facedown, a ligament at the back of his neck would have protected his airway. But with his head turned, Chauvin’s weight would have compressed the hypopharynx.

The expert calculated that at times when Chauvin was in a near-vertical position, with his toes off the ground, half of Chauvin’s body weight -- 91.5 pounds -- was directly on Floyd’s neck.

Tobin said other factors worsened the effect on Floyd: He pointed out that Officer J. Kueng held Floyd’s left hand upward, and Chauvin’s right knee compressed Floyd’s side, meaning “the ability to expand his left side is enormously impaired." The handcuffs and the hard surface also interfered with Floyd's ability to breathe, Tobin said.

Tobin used simple language, with terms like “pump handle” and “bucket handle” to describe the act of breathing for jurors. At one point, he invited them to “examine your own necks, all of you in the jury right now” to better understand the effect of a knee on a person’s neck. Most of the jurors felt their necks as Tobin instructed, though the judge later told them they didn't have to do so.

Chauvin, 45, is charged with murder and manslaughter in Floyd’s death May 25. Floyd was arrested outside a neighborhood market after being accused of trying to pass a counterfeit $20 bill. A panicky-sounding Floyd struggled and claimed to be claustrophobic as police tried to put him in a squad car, and they pinned him to the pavement.

Bystander video of Floyd crying that he couldn’t breathe as onlookers yelled at Chauvin to get off him sparked protests and scattered violence around the U.S.

The trial so far

Defense attorney Eric Nelson has argued that the now-fired white officer “did exactly what he had been trained to do over his 19-year career,” and he has disputed that Chauvin’s actions were what killed Floyd. Fentanyl and methamphetamine were found in Floyd’s system.

Tobin's testimony comes a day after a use-of-force expert testified that Chauvin bore down with most of his weight on Floyd's neck or neck area and his back the entire 9 1/2 minutes. 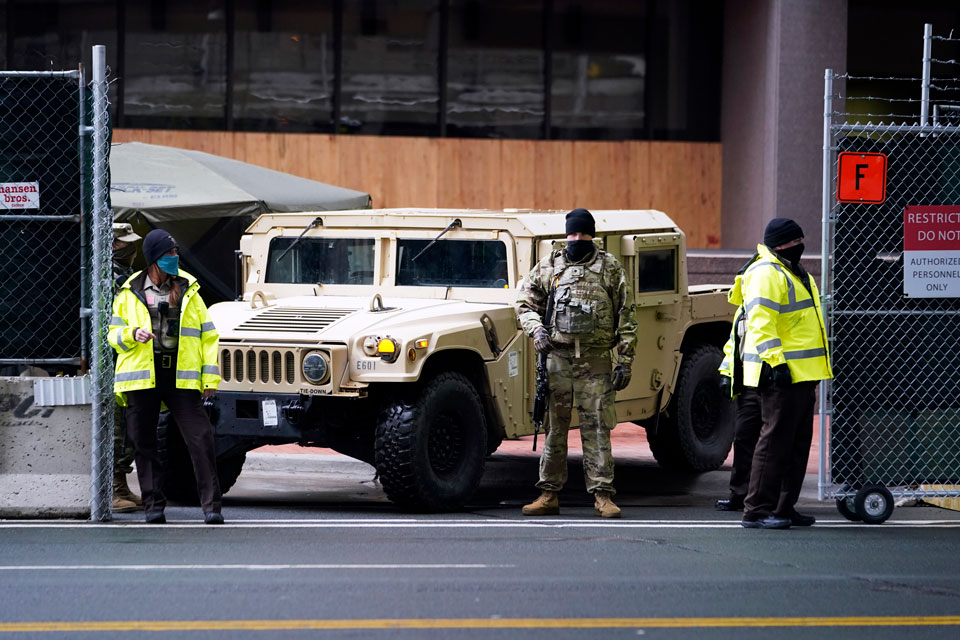 A National Guard soldier, center, stands guard with deputies at the restricted vehicle entrance of the Hennepin County Government Center, Thursday, April 8, 2021, in Minneapolis where testimony continues in the trial of former Minneapolis police officer Derek Chauvin. Chauvin is charged with murder in the death of George Floyd during an arrest last May in Minneapolis. (AP Photo/Jim Mone)Jody Stiger, a Los Angeles Police Department sergeant serving as a prosecution witness, said Wednesday that based on his review of video evidence, Chauvin applied pressure to Floyd's neck or neck area from the time officers began pinning Floyd to the ground until paramedics began to move him to a stretcher.

“That particular force did not change during the entire restraint period?” prosecutor Steve Schleicher asked as he showed the jury a composite of five still images.

Nelson countered by pointing out what he said were moments in the video footage when Chauvin's knee did not appear to be on Floyd's neck but on his shoulder blade area or the base of his neck.

Stiger did not give much ground, saying the officer's knee in some of the contested images still seemed to be near Floyd's neck, though he agreed his weight might have shifted at times.

In other testimony Tuesday, the lead Minnesota state investigator on the case, James Reyerson, initially agreed with Nelson that Floyd seemed to say in a police body-camera video of his arrest, “I ate too many drugs.”

But when a prosecutor played a longer clip of the video, Reyerson said he believed what Floyd really said was “I ain't do no drugs.”