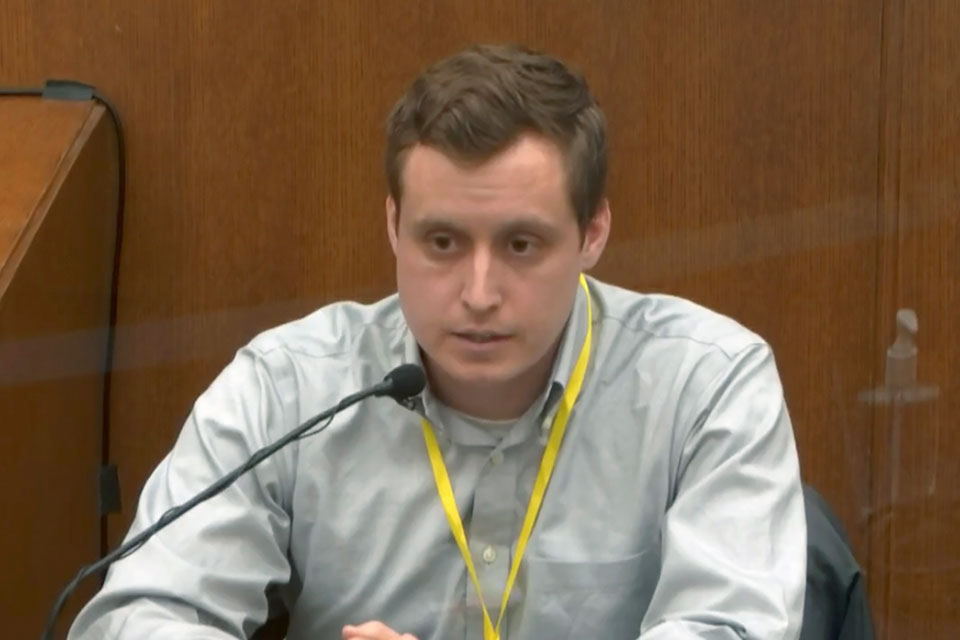 MINNEAPOLIS (AP) — The emergency room doctor who pronounced George Floyd dead after trying to resuscitate him testified Monday that he theorized at the time that Floyd's heart most likely stopped because he didn't get enough oxygen.

Dr. Bradford Langenfeld, who was a senior resident on duty that night at Hennepin County Medical Center, took the stand at the beginning of Week Two at former Minneapolis Officer Derek Chauvin’s murder trial, as prosecutors sought to establish that it was Chauvin’s knee on the Black man’s neck that killed him.

Langenfeld said Floyd’s heart had stopped by the time he arrived at the hospital. The doctor said that he was not told of any efforts at the scene by bystanders or police to resuscitate Floyd but that paramedics told him they had tried for about 30 minutes.

Under questioning by prosecutor Jerry Blackwell, Langenfeld said that based on the information he had, it was “more likely than the other possibilities” that Floyd's cardiac arrest — the stopping of his heart — was caused by asphyxia, or insufficient oxygen.

Chauvin, 45, is charged with murder and manslaughter in Floyd's death May 25. The white officer is accused of pinning his knee on the 46-year-old man's neck for 9 minutes, 29 seconds, as Floyd lay face-down in handcuffs outside a corner market, where had been accused of trying to pass a counterfeit $20 bill for a pack of cigarettes.

The defense argues that Chauvin did what he was trained to do and that Floyd's use of illegal drugs and his underlying health conditions caused his death.

Chauvin attorney Eric Nelson questioned Langenfeld about whether some drugs can cause hypoxia, or insufficient oxygen. The doctor acknowledged that fentanyl and methamphetamine, both of which were found in Floyd's body, can do so.

The county medical examiner's office ultimately classified Floyd's death a homicide — that is, a death at the hands of someone else. 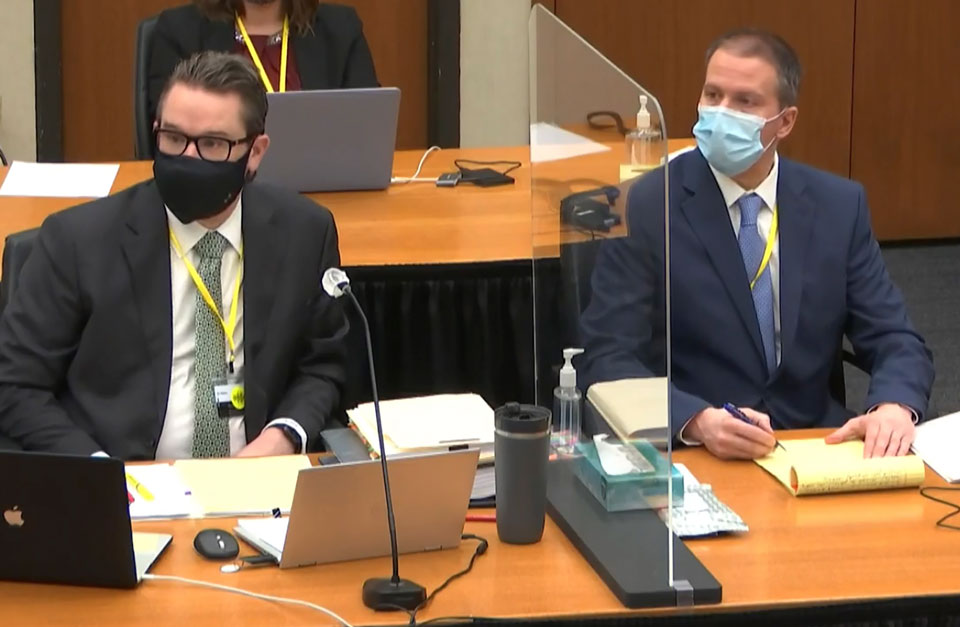 In this image from video, defense attorney Eric Nelson, left, and defendant former Minneapolis police Officer Derek Chauvin, right, listen as Hennepin County Judge Peter Cahill discusses motions before the court Monday, April 5, 2021, in the trial of Chauvin at the Hennepin County Courthouse in Minneapolis. Chauvin is charged in the May 25, 2020, death of George Floyd. (Court TV via AP, Pool)The full report said Floyd died of “cardiopulmonary arrest, complicating law enforcement subdual, restraint, and neck compression.” A summary report listed fentanyl intoxication and recent methamphetamine use under “other significant conditions” but not under “cause of death.”

Under cross-examination from Nelson, Langenfeld said Floyd’s carbon dioxide levels were more than twice as high as levels in healthy person, and he agreed that that could be attributed to a respiratory problem. But on questioning from the prosecutor, the doctor said the high levels were also consistent with cardiac arrest.

Langenfeld also testified that neither he nor paramedics administered a drug that would reverse the effects of an opioid overdose. The doctor said giving Narcan once a patient is in cardiac arrest would provide no benefit.

Floyd's treatment by police was captured on widely seen bystander video that sparked protests that rocked Minneapolis and quickly spread to other U.S. cities and beyond and descended into violence in some cases. 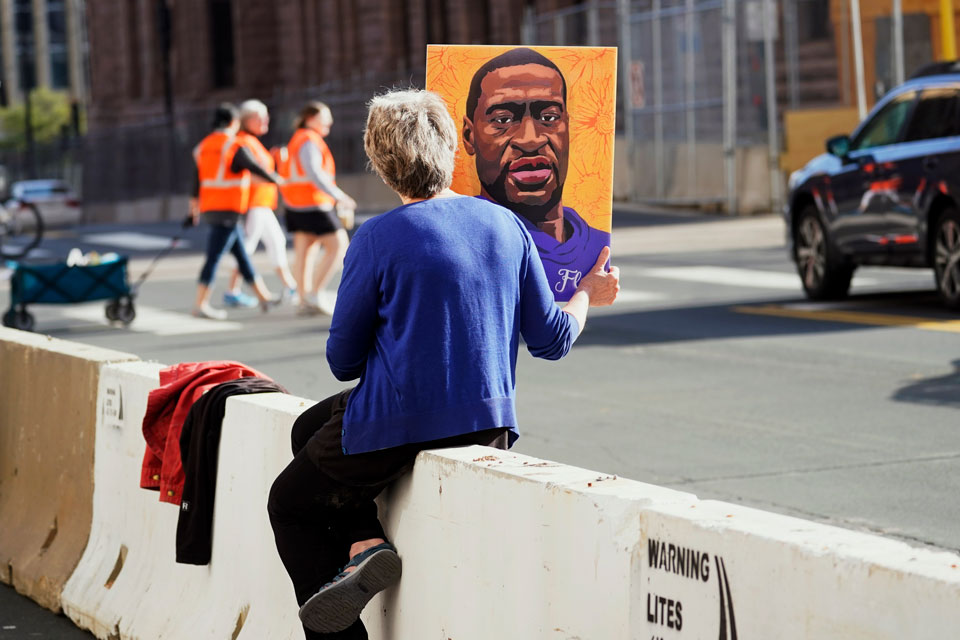 A woman holds a George Floyd picture while seated on a concrete barrier near the Hennepin County Government Center Monday, April 5, 2021, in Minneapolis where the second week of testimony in the trial of former Minneapolis police officer Derek Chauvin continues. Chauvin is charged with murder in the death of George Floyd during an arrest last May in Minneapolis. (AP Photo/Jim Mone)Langenfeld said that “any amount of time” a patient spends in cardiac arrest without immediate CPR decreases the chance of a good outcome. He said there is an approximately 10% to 15% decrease in survival for every minute that CPR is not administered.

Prosecutors in the second week of the trial are also expected to zero in on Chauvin’s training in the use of force.

Minneapolis Police Chief Medaria Arradondo took the stand Monday, testifying about police policy that dictates that whenever it is reasonable to do so, officers must use tactics to deescalate a situation so as to avoid or minimize the use of force. 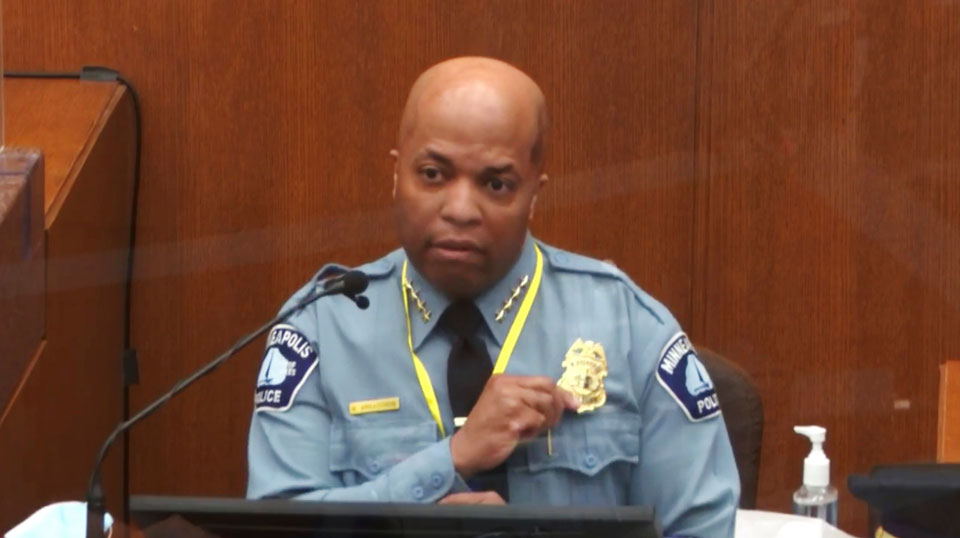 In this image from video, witness Minneapolis Police Chief Medaria Arradondo testifies as Hennepin County Judge Peter Cahill presides Monday, April 5, 2021, in the trial of former Minneapolis police Officer Derek Chauvin at the Hennepin County Courthouse in Minneapolis. Chauvin is charged in the May 25, 2020 death of George Floyd. (Court TV via AP, Pool)Prosecutor Steve Schleicher noted that while some people may become more dangerous under the influence of drugs or alcohol, some may actually be “more vulnerable.” Arradondo agreed and acknowledged that this must also be taken into consideration when officers decide to use force.

“It’s recognizing that when we get the call from our communities, it may not often be their best day, and they may be experiencing something that’s very traumatic,” the chief said.

Before he was pinned to the ground, a handcuffed and frantic Floyd struggled with police who were trying to put him in a squad car, saying he was claustrophobic.

Arradondo, the city's first Black chief, fired Chauvin and three other officers the day after Floyd's death, and in June called it “murder.”

“Mr. George Floyd's tragic death was not due to a lack of training — the training was there,” Arradondo said then.

“Chauvin knew what he was doing.”

Prosecutors have already called supervisory officers to build the case that Chauvin improperly restrained Floyd. A duty sergeant and a lieutenant who leads the homicide division both questioned Chauvin's actions in pinning Floyd to the ground.

“Totally unnecessary,” Lt. Richard Zimmerman, the longest-tenured officer on the force, testified Friday. He said once Floyd was handcuffed, he saw “no reason for why the officers felt they were in danger, if that’s what they felt, and that’s what they would have to feel to be able to use that kind of force."