Confederate Symbols Prove Difficult to Remove in Many States 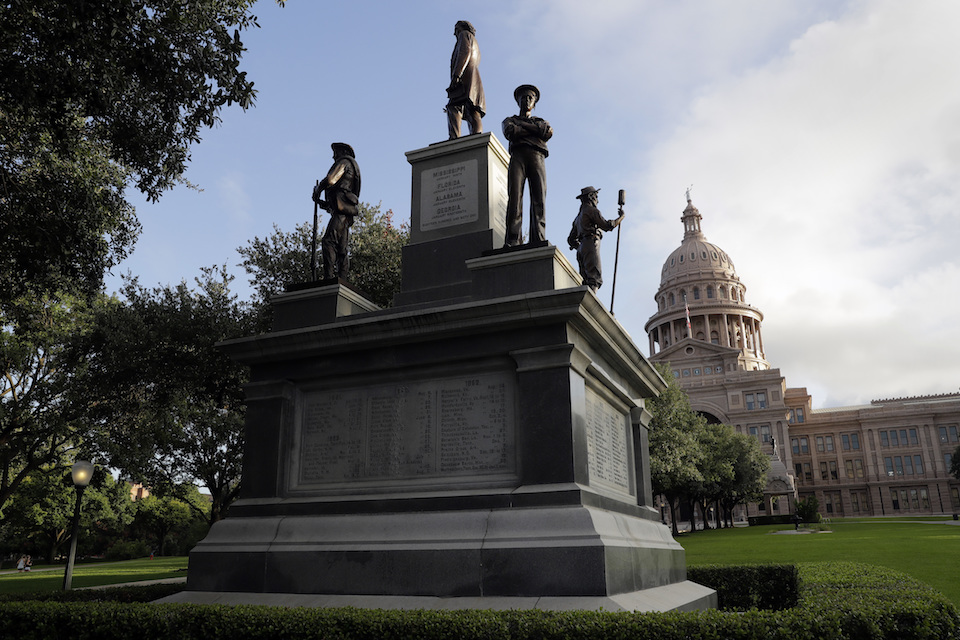 AUSTIN, Texas (AP) — Just past the gate at an entrance to the Texas Capitol, a large monument honoring the soldiers of the Confederacy looms, with towering statues and an inscription that reads, “Died for state rights guaranteed under the Constitution.”

It is one of seven Confederate memorials on the Texas Capitol grounds alone. There are over 2,000 Confederate symbols — from monuments to building names — in public spaces nationwide, more than a century and a half after the Civil War ended slavery, according to the Southern Poverty Law Center.

The movement to remove Confederate monuments and depictions of historical figures who mistreated Native Americans became part of the national reckoning over racial injustice following George Floyd's death last year in Minneapolis. While many have been removed — or torn down by protesters — it's proven difficult to remove those that remain.

At least six Southern states have policies protecting monuments, the law center said, while historical preservation boards and Republican legislative majorities have slowed the momentum, saying it's important to preserve America's past.

“We are at a really important moment of reckoning and racial justice,” said Texas Rep. Rafael Anchia, a Democrat who introduced a proposal in the Republican-controlled Legislature to remove Confederate depictions at the Statehouse. “This fits into that process of really racial truth and reconciliation."

But he's up against Republican legislation to protect monuments. Anchia's measure is still waiting for a committee hearing, where attempts to remove Confederate monuments and holidays have died in previous sessions.

Texas isn't the only place where the issue faces an uphill battle.

Alabama, Georgia, Mississippi, North Carolina, South Carolina and Tennessee have preservation laws meant to “protect primarily monuments and memorials to the Confederacy,” said Lecia Brooks, chief of staff of the Southern Poverty Law Center. A majority of them went up in the early Jim Crow era.

“The truth of the matter is that most of these monuments and memorials don’t offer any historical context at all,” Brooks said. “It is just a way to venerate people who fought for the continuation of slavery.”

In Alabama, a 2017 law approved as some cities began taking down Confederate statues forbids the removal or alteration of monuments more than 40 years old. Violations carry a $25,000 fine, but some cities have opted to pull them down and pay.

In March, Alabama lawmakers rejected revisions to the law that would have given cities and counties a way to take down Confederate monuments and relocate them for preservation.

In Pennsylvania, a bill from Senate Republicans would prevent removing public monuments without legislative approval, with penalties of up to a felony charge.

In a statement, GOP state Sen. Doug Mastriano said Pennsylvania is home to thousands of memorials and monuments “that help tell America’s story to future generations.” He said his legislation came “in response to high-profile cases in which public monuments were vandalized."

Mastriano's measure also would withhold state support from local governments that refuse to uphold laws protecting public monuments and “require the Pennsylvania Attorney General to prioritize the prosecution of any matters related to the vandalism of monuments within the state’s jurisdiction when a district attorney refuses to prosecute.”

At the Ohio Capitol, the removal of a 9-foot-tall (3-meter-tall) copper statue of Christopher Columbus has been delayed until at least 2025. It's stood on the Statehouse grounds in the city that bears his name since 1932. Critics say monuments to the explorer ignore the mistreatment of Indigenous people as Europeans settled in North America.

Delaying the statue's removal came after a board of state lawmakers and city leaders decided in July that a formal removal process must be done by the agency managing the grounds.

According to a rule approved in February by the Capitol Square Review and Advisory Board, anyone can submit a proposal to remove “commemorative works,” but final approval will take five years. That came days after Mayor Andrew Ginther swiftly removed a similar Columbus statue from City Hall.

Board spokesman Mike Rupert said in a statement that the rule mirrors the process for erecting a “commemorative work” at the Ohio Capitol. He said it was not targeting any monument.

In California, amid racial injustice protests last summer, icons were toppled of Junipero Serra, an 18th century Roman Catholic priest who founded nine of the state's 21 Spanish missions and is credited with bringing Roman Catholicism to the U.S. West. Serra forced Native Americans to stay at the missions after they were converted or face punishment. His statues have been defaced for years by people who said he destroyed tribes and their culture.

California's first Native American assemblyman, James Ramos, wants to replace a statue of Serra at the Capitol. The Democrat said he worked with tribes on replacement options and to bring awareness to “atrocities, genocide and forced labor” endured by Indigenous people during the Spanish missionary period.

“We are bringing that discussion and that voice that was left out of the equation when those monuments were put up to be able to have that voice now in 2021,” Ramos said.

While facing a tougher fight in Texas, Anchia still has hope for removing contentious icons at the Capitol after one of the state's largest Confederate monuments — in Dallas — became one of 168 Confederate symbols removed nationwide last year.

But his legislation is up against a monument protection bill from Republican state Sen. Brandon Creighton. It would create a process, with public input, for altering a state memorial to any historical figure — whether it's a monument or a street name.

“One opinion thinks that erasing that part of our past is healthy and is the best route Texas can take,” Creighton said. “And then you have my opinion, and I believe many others here, that keeping that history in place is very important.”

Associated Press reporters Mark Scolforo, in Harrisburg, Pennsylvania, and Farnoush Amiri, in Columbus, Ohio, contributed to this report. Coronado and Amiri are corps members for the Associated Press/Report for America Statehouse News Initiative. Report for America is a nonprofit national service program that places journalists in local newsrooms to report on undercovered issues.