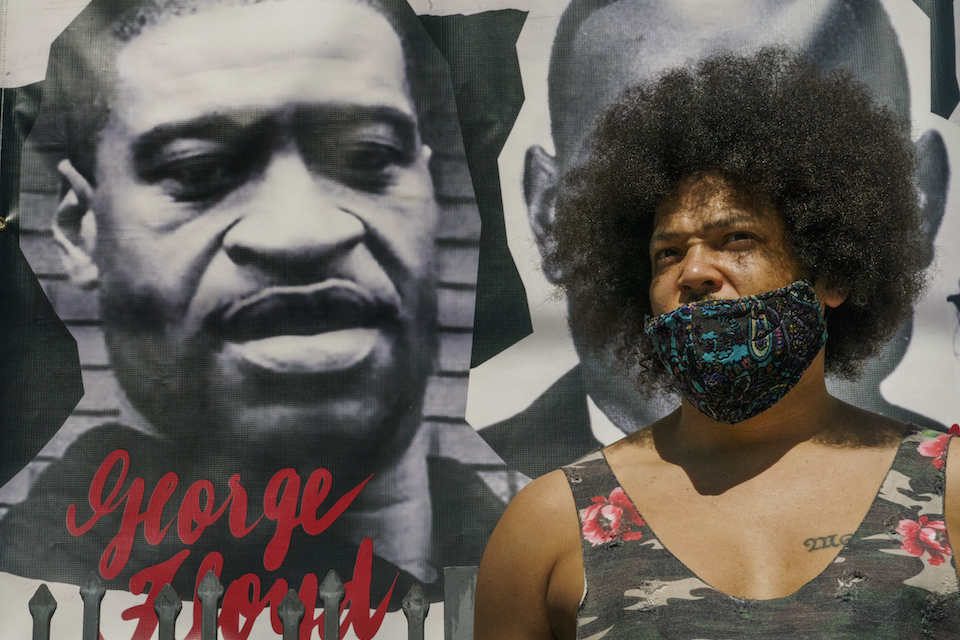 For some it’s too much to watch. Others just can’t turn away.

The televised trial of Derek Chauvin, the former white police officer charged in the death of George Floyd, has provoked strong emotions among many Black men and women — all tinged with an underlying dread that it could yield yet another devastating disappointment.

For many, it has brought back memories of the disturbing video of Floyd's last moments as he gasped for breath with Chauvin's knee on his neck.

The video galvanized protests in cities across the U.S. and the world, as the words “Black Lives Matter" took hold.

“I had to mute the TV,” said Lisa Harris, 51, of Redford Township, just west of Detroit. “Hearing Mr. Floyd continue to say he can’t breathe and call for his mother — it was a lot. It’s been a lot to watch."

Fear of being let down

Steven Thompson remembers closely watching the 2013 trial of George Zimmerman in the shooting death of 17-year-old Trayvon Martin in Florida and feeling blindsided. Zimmerman, who identifies as Hispanic, was acquitted on all counts in the unarmed Black teen's death, including second-degree murder.

Thompson is choosing not to watch the trial of Chauvin, the former Minneapolis officer charged with murder and manslaughter, even though he feels there is a strong case against him.

“I definitely have a fear of being let down. And instead of investing my time and energy into it now, knowing how these things go, I’d rather be pleasantly surprised,” the Los Angeles resident said.

Marlene Gillings-Gayle said she had planned not to watch the trial to preserve her peace of mind. But she’s found herself watching almost all of it. She's had to force herself to go outside and take walks, or risk watching the trial all day and feeling upset.

The retired high school teacher who lives in New York City describes herself as a political person who likes to stay aware of current events and vocalize her opinions.

“I’m trying not to be pissed, because we’ve been here and done that too many times,” she said, referring to other police officers acquitted in the deaths of unarmed Black people.

She’s watching the trial with apprehension, as she ponders what Floyd's killing and the way the trial has unfolded so far says about America and its values.

Grief and trauma on the stand

Chauvin, 45, who was eventually fired from the police force, is accused of killing a handcuffed Floyd last May by pinning his knee on the 46-year-old Black man’s neck for 9 minutes, 29 seconds, as he lay face-down.

Floyd had been accused of passing a counterfeit $20 bill at a neighborhood market.

The first week of the trial has included emotional testimonies from several people who witnessed Floyd’s death: The young woman, a teenager at the time, who filmed Floyd’s last moments and told the courtroom she stays “up nights apologizing to George Floyd;” the 61-year-old man who sobbed on the stand, compelling the judge to order a 10-minute recess; the firefighter who begged officers to let her check Floyd’s pulse as he gasped for air, saying, “I was desperate to help.”

The grief and trauma of these witnesses has been on full display, filling in details from new perspectives to create a fuller picture of the scene that people around the world watched over cellphone video last May.

One Black death after another

For Kyra Walker, it was enough to tune out and shut down Twitter one day.

“I realized I just didn’t have it in me to watch all this,” she said.

Floyd’s death was traumatizing enough for Walker, but seeing conversations about the trial on Twitter this week brought back a flood of emotions she has grappled with over the course of the last year.

“I had a moment where I just felt broken and I started thinking about Ahmaud Arbery and Breonna Taylor and how in such a short time frame, it was like one Black death after the other, without a break,” she said. It has made her feel paranoid at times for her 11-year-old Black son anytime he leaves home.

The trial is only furthering the uneasiness many felt when the video of Chauvin pressing his knee to Floyd’s neck started to circulate online.

“It took me a while to watch it because I know what these videos are about. I know the ending already,” Thompson said.

No trust in criminal justice system

Leigh Smith, a logistics operations manager who lives in the Detroit suburb of Grosse Pointe Park, said he has tuned in each day of the trial. He calls some of the testimony “freaking depressing.”

“You catch a murder on camera and you’re going to explain away to me that this man died of a heart attack?” Smith said of Floyd. “All this does is reaffirm the hatred and entrenchment of white supremacy and white domination over communities of color.”

Brenda Hill, 57, of Detroit watched every video during every minute of the trial’s first two days. Hill, who works for a nonprofit that advocates for low-wage workers, isn’t so sure the rest of the country is viewing the trial — or how African Americans continue to be treated — through the same lens.

“We don’t have any trust in this criminal justice system,” she said. “I should be assured that by this time everyone saw what I did. I’m disgusted, I’m hurt by everything.”

As witnesses and attorneys in the courtroom recount the final moments of Floyd’s life in detail, the emotional trauma many Black Americans have felt over the last several years is resurfacing.

“Our country needs counseling,” Gillings-Gayle said. “The witnesses have been grieving and suffering for the last 10 months. And we’ve all been grieving, too.”

Nasir is a Chicago-based multiformat journalist with The Associated Press' Race and Ethnicity team. Williams, also a contributor to the team, reported from West Bloomfield, Michigan.