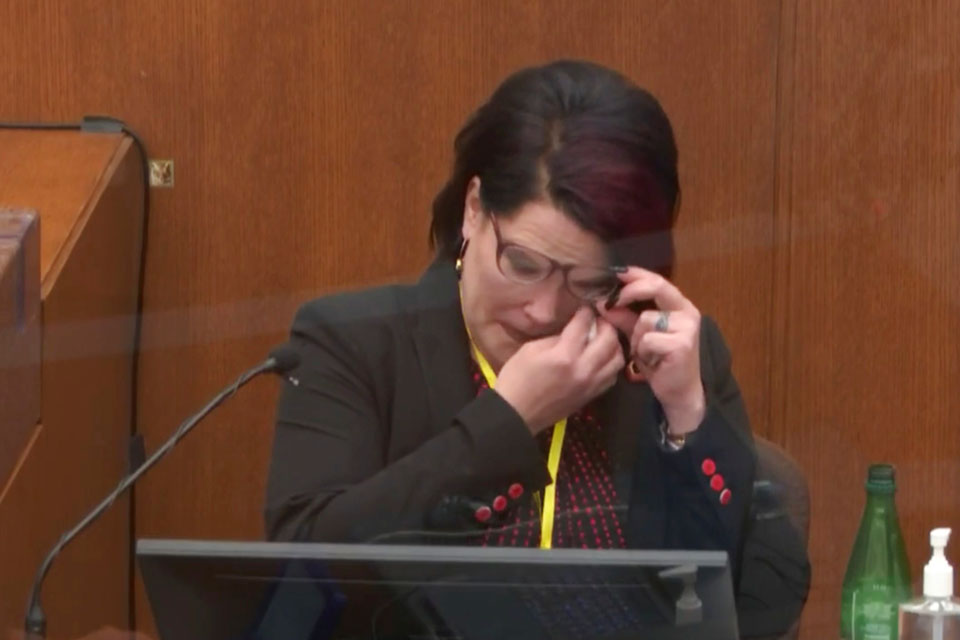 MINNEAPOLIS (AP) — George Floyd’s girlfriend tearfully told a jury Thursday the story of how they met -- at a Salvation Army shelter where he was a security guard with “this great, deep Southern voice, raspy” -- and how they both struggled mightily with an addiction to opioids.

“Our story, it’s a classic story of how many people get addicted to opioids. We both suffered from chronic pain. Mine was in my neck and his was in his back,” 45-year-old Courteney Ross said on Day Four of former Officer Derek Chauvin’s murder trial.

She said they “tried really hard to break that addiction many times.”

Prosecutors put Ross on the stand as part of an effort to humanize Floyd in front of the jury and portray him as more than a crime statistic, and also explain his drug use.

The defense has argued that Chauvin did what he was trained to do and that Floyd’s death last May was caused by his illegal drug use, underlying health conditions and his natural adrenaline. An autopsy found fentanyl and methamphetamine in his system.

Ross’s testimony could help prosecutors blunt the argument that drugs killed Floyd. Medical experts have said that while the level of fentanyl in his system could be fatal to some, people who use the drug regularly can develop a tolerance to it. 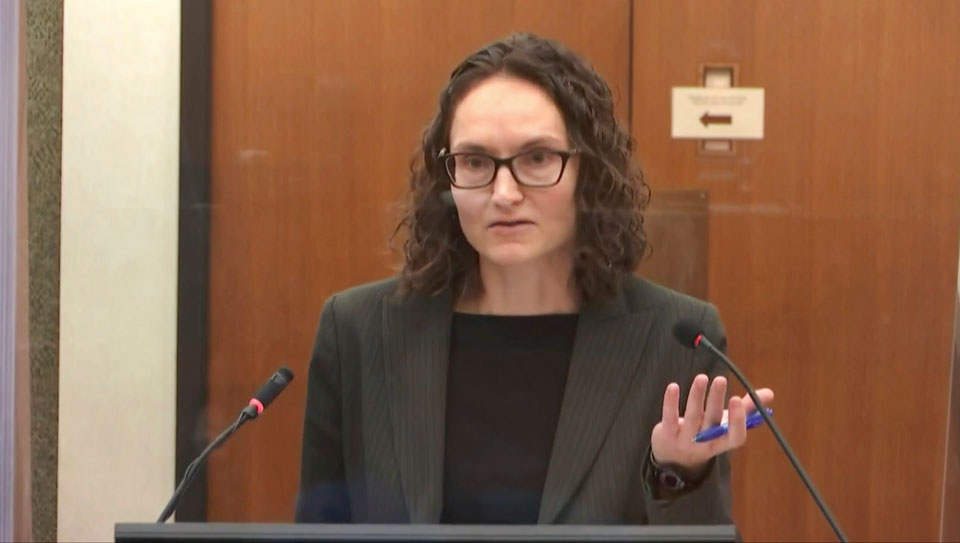 In this image from video, prosecutor Erin Eldridge questions witness Seth Bravinder Thursday, April 1, 2021, in the trial of former Minneapolis police Officer Derek Chauvin at the Hennepin County Courthouse in Minneapolis, Minn. Chauvin is charged in the May 25, 2020, death of George Floyd. (Court TV via AP, Pool)Chauvin, 45, is charged with murder and manslaughter, accused of killing Floyd by kneeling on the 46-year-old Black man’s neck for 9 minutes, 29 seconds, as he lay face-down in handcuffs, accused of passing a counterfeit $20 bill at a neighborhood market.

The case triggered scattered violence around the U.S. and widespread soul-searching over racism and police brutality. The most serious charge against the now-fired white officer carries up to 40 years in prison.

In her testimony, Ross described how both she and Floyd struggled with addiction to painkillers throughout their relationship. She said they both had prescriptions, and when those ran out, they took the prescriptions of others and also used illegal drugs.

”Addiction, in my opinion, is a lifelong struggle. ... It’s not something that just kind of comes and goes.

"It’s something I’ll deal with forever,” she said.

In March 2020, Ross drove Floyd to the emergency room because he was in extreme stomach pain, and she learned he had overdosed. In the months that followed, Ross said, she and Floyd spent a lot of time together during the coronavirus quarantine, and Floyd was clean.

Chauvin attorney Eric Nelson drove hard at Floyd’s drug use in cross-examining Ross, asking questions aimed at showing the jury that it was dangerous. He pointed out that she supposedly told the FBI that she believed Floyd had overdosed on heroin in March and that the couple used pills in May that made her feel as if she was going to die.

Under questioning from Nelson, Ross also disclosed that Floyd’s pet name for her in his phone was “Mama” — testimony that called into question the widely reported account that Floyd was crying out for his mother as he lay pinned to the pavement.

Also Thursday, a paramedic who arrived on the scene that day testified that the first call was a Code 2, for someone with a mouth injury, but it was upgraded a minute and a half later to Code 3 -– a life-threatening incident that led them to turn on the lights and siren.

Seth Bravinder said he saw no signs that Floyd was breathing or moving, and it appeared he was in cardiac arrest. A second paramedic, Derek Smith, testified that he checked for a pulse and couldn't detect one: “In layman’s terms? I thought he was dead."

Bravinder said they loaded Floyd into the ambulance so he could get care “in an optimum environment,” but also because bystanders “appeared very upset on the sidewalk,” and there was some yelling. “In my mind at least, we wanted to get away from that," he said.

Smith likewise said there were “multiple people” with “multiple cellphones out," and “it didn’t feel like a welcoming environment.”

Chauvin's lawyer has argued that the police on the scene were distracted by what they perceived as a growing and increasingly hostile crowd. Video showed somewhere around 15 onlookers not far from where Floyd lay on the pavement.

Bravinder said after he drove the ambulance three blocks and jumped in back to help his partner, a monitor showed that Floyd had flatlined — his heart had stopped. He said they were never able to restore a pulse.

On cross-examination, Chauvin’s lawyer questioned why the ambulance did not go straight to the hospital, and he pressed Smith on Floyd’s condition as he lay on the pavement, in an apparent attempt to plant doubt as to whether Chauvin was directly responsible for his death. The paramedic expressed himself in blunt terms that Floyd was “dead” or “deceased.”

Ross began her testimony by telling how she and Floyd first met in 2017 at a shelter where Floyd was a security guard.

“May I tell the story?” she asked. “It’s one of my favorite stories to tell.”

She said she had gone to the shelter because her sons’ father was staying there. But she got upset that day because the father was not coming to the lobby to discuss their son’s birthday. Floyd came over to check on her.

“We’ve been through so much, my sons and I,” she continued, "and this kind person, just to come up to me and say, ‘Can I pray with you?’ when I felt alone in this lobby, it was so sweet. At the time, I had lost a lot of faith in God.”

Minnesota is a rarity in explicitly permitting such “spark of life” testimony about a crime victim ahead of a verdict. Defense attorneys often complain that such testimony allows prosecutors to play on jurors’ emotions.