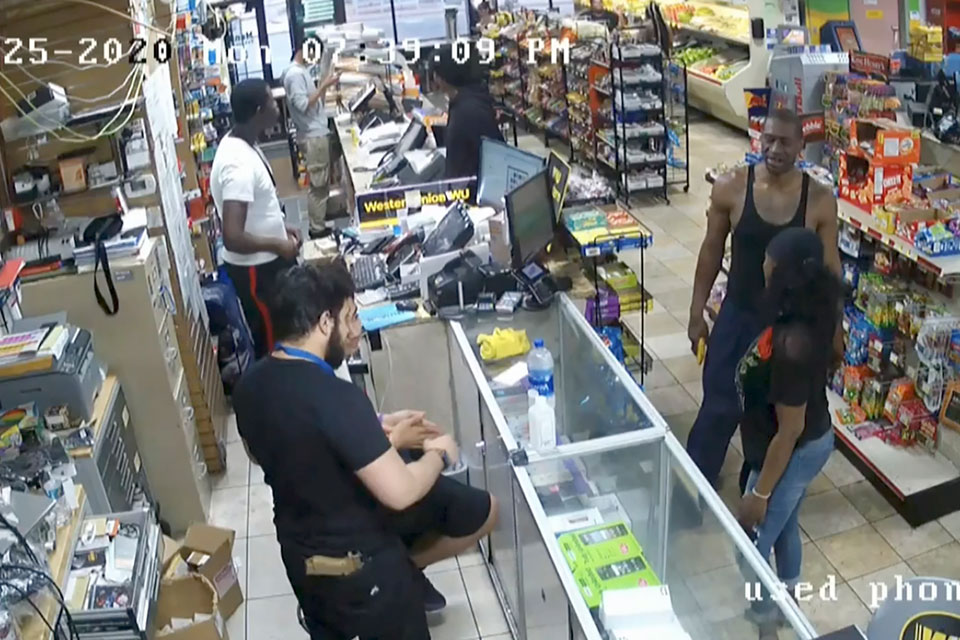 MINNEAPOLIS (AP) — The convenience store cashier who was handed a counterfeit $20 bill by George Floyd — setting in motion the Black man’s ill-fated encounter with police — testified Wednesday that he watched Floyd’s arrest outside with “disbelief -- and guilt.”

“If I would’ve just not tooken the bill, this could’ve been avoided,” 19-year-old Christopher Martin lamented at Officer Derek Chauvin’s murder trial, joining the burgeoning list of onlookers who expressed a sense of helplessness and lingering guilt over Floyd's death last May.

Prosecutors used Martin to help lay out the sequence of events leading to the arrest, and also played store security footage showing Floyd in Cup Foods for about 10 minutes, adding to the mountain of video documenting what happened.

Martin said he immediately believed the $20 that Floyd gave him in exchange for a pack of cigarettes was fake, but accepted it even though store policy was that the amount would be taken out of his paycheck.

Martin said he initially planned to just put the bill on his “tab” but then second-guessed himself and told a manager, who sent Martin outside to ask Floyd to return to the store.

He said a manager asked another employee to call police after Floyd and a passenger in Floyd's vehicle twice refused to go back into the store to resolve the issue.

Floyd was later arrested outside, where Chauvin pinned his knee on the man's neck for what prosecutors said was 9 minutes, 29 seconds, as a handcuffed Floyd lay face-down on the pavement. Floyd, 46, was later pronounced dead at a hospital.

Martin said that inside the store, he asked Floyd if he played baseball, and Floyd said he played football, but it took Floyd some time to respond, so “it would appear that he was high.” But he described Floyd as friendly and talkative.

The defense has argued that the now-fired white officer did what his training told him to do and that Floyd’s death was not caused by Chauvin's knee on his neck, as prosecutors contend, but by a combination of illegal drug use, heart disease, high blood pressure and the adrenaline flowing through his body.

Martin went outside as people were gathering on the curb and yelling at officers, then called his mother, who lived in an apartment upstairs, and told her to stay inside before he took out his phone and began recording.

He said he saw Officer Tou Thao push one of his co-workers, and Martin said he also held back another man who was trying to defend himself after being pushed by Thao.

Martin later deleted his recording, explaining that the ambulance didn’t take the fastest route to the hospital so he thought Floyd died.

“I just didn’t want to have to show it (the video) to anyone,” he said.

Chauvin, 45, is charged with murder and manslaughter. The most serious charge against him carries up to 40 years in prison.

Floyd’s death, along with the harrowing bystander video of him, triggered sometimes violent protests around the world and a reckoning over racism and police brutality across the U.S.

On Tuesday, a parade of witnesses testified that they and other bystanders became upset as they repeatedly begged Chauvin to take his knee off Floyd's neck, but Chauvin refused to ease up, and Thao forced back those on the sidewalk who tried to intervene.

One of those who happened upon the scene, Minneapolis firefighter Genevieve Hansen, wept as she recalled being prevented from using her EMT training to help Floyd.

“There was a man being killed,” said Hansen, who testified in her dress uniform and detailed her emergency training.

“I would have been able to provide medical attention to the best of my abilities. And this human was denied that right.”

Chauvin appeared unmoved by their pleas, according to the bystanders, including the teenager who shot the video that set off nationwide protests, 18-year-old Darnella Frazier. She said Chauvin gave the bystanders a “cold” and “heartless” look.

The testimony from the prosecution witnesses was apparently aimed at showing that Chauvin had multiple opportunities to think about what he was doing and change course.

But Chauvin attorney Eric Nelson also repeatedly sought to bring out evidence that the onlookers were becoming agitated, in an apparent attempt to show that the police were distracted by what they perceived as a growing and increasingly hostile crowd.

Witnesses testified that no bystanders interfered with police.

Wednesday morning's testimony was briefly interrupted when a juror stood and raised her hand and gestured toward the door. She later told the judge that she had been feeling stress and having trouble sleeping, but told the judge she was OK to proceed.