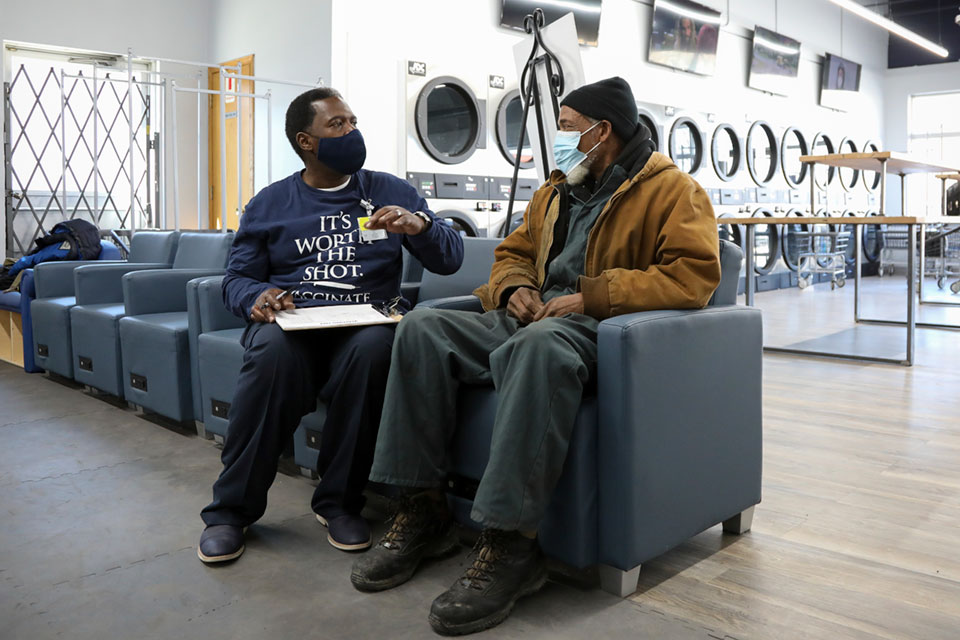 CHICAGO (AP) — His last job was selling cars, but in his new gig, working to turn the tide against a pandemic, Herman Simmons knows not to be too pushy or overbearing.

He’s one of more than 50 outreach workers a Chicago hospital has enlisted to promote vaccination against COVID-19 in hard-hit Black and brown neighborhoods.

Their job is approaching strangers at laundromats, grocery stores and churches, handing out educational material and making vaccination appointments for those who are willing.

“I see myself as my brother’s keeper. I don’t try to force them. I’m persistent,’’ he said.

Top U.S. health officials say they’re in a race to vaccinate as many people as quickly as possible as COVID-19 variants spread, mask and distancing rules are relaxed, and Americans crave a return to normalcy.

As part of these efforts, the Biden administration announced Thursday it will invest nearly $10 billion to expand vaccine access in communities of color, rural areas, low-income populations and other underserved communities. Some of the money will go to community health centers. Funding comes mostly from the American Rescue Plan.

Many are still skeptical

While the U.S. is vaccinating roughly 2.5 million people daily and nearly 1 in 3 adults have received at least one shot, roughly that many say they are skeptical or won’t get vaccinated.

“There will be a hard core that never want to be vaccinated and we can’t do anything about that,’’ said Dr. Eric Toner, a senior scholar at Johns Hopkins Center for Health Security. 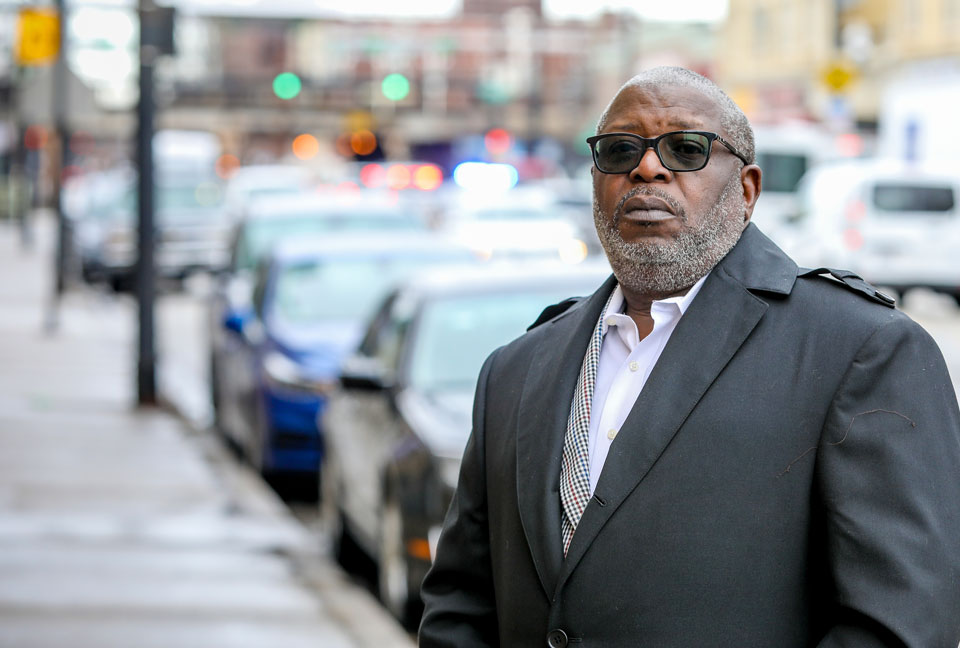 CB Johnson poses for a portrait outside his office on Chicago's West Side on Tuesday, March 16, 2021. Johnson runs a Chicago drug recovery group serving mostly Black residents and is helping get people in the community vaccinated for COVID-19. He said that insider cred helps. So does patience. ’’When you listen to what their concerns are and you hear them out and you validate their concerns, and then you come back and explain to them, ‘Hey, look, I mean what happens if you catch COVID. Would you rather have the vaccine that helps you?’” (AP Photo/Teresa Crawford)He said that number is unlikely to prevent effective control of the virus. To make sure it doesn’t, authorities are working to change minds and boost access in minority communities where skepticism is among the hurdles to vaccination.

In the socially distanced age of COVID-19, the in-the-trenches work of regular folk-turned-recruiters stands out.

Simmons is Black, amiable and talkative — a natural for this kind of work.

“I tell ‘em I was a little afraid at first” about getting the shots, said Simmons, who quit the car dealership when co-workers got sick with the virus. He tells them he has friends and family members who’ve died, and how easy it is to sign up.

“I would like to say that I get more sign-ins than not,’’ Simmons said, “but I don’t think that’s the case.’’

“They don’t trust it. Some think the vaccines were made too quickly to be safe," he said.

That’s a common narrative. But it’s not the whole story.

For many Black people, mistrust of medical institutions is deep-seated. Their reasons are varied, vehement and often valid. And they don’t even start with Tuskegee, the U.S. government study that began in 1932 and withheld treatment for Black men with syphilis. 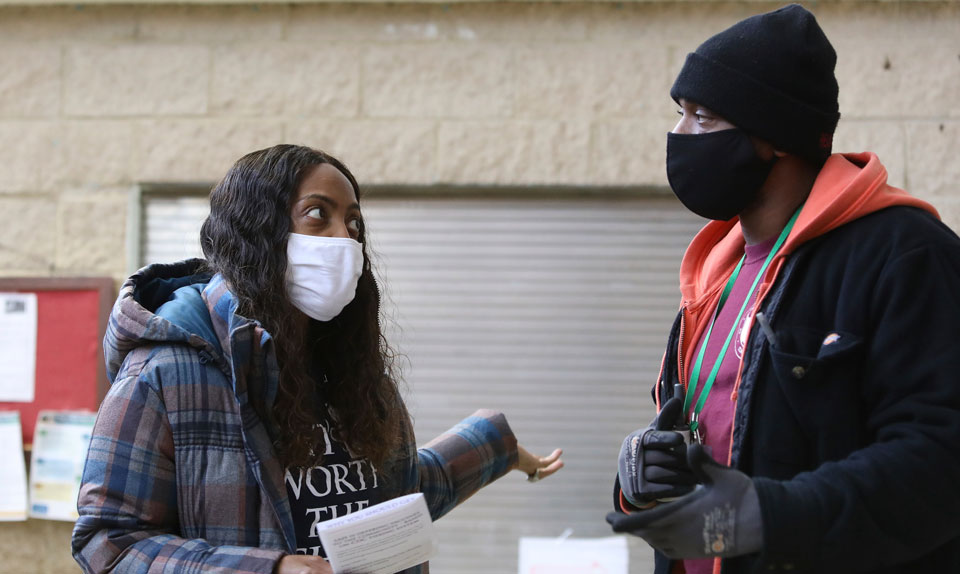 Community outreach worker Donyell Wynn, left, talks with Will Jones in Chicago on Tuesday, Feb. 23, 2021. Jones said he was interested in being vaccinated against COVID-19, but wanted more information first. Wynn was enlisted by Saint Anthony Hospital to promote vaccination in hard hit Black and brown neighborhoods. (AP Photo/Teresa Crawford)Mistrust stems from surgeries on enslaved women to the absence of Black people in studies that guide modern-day medical decisions. It includes mistaken assumptions claiming race-based biological differences, and disrespect in the doctor’s office.

Some are afraid of needles. Some believe internet myths. And some say they intend to get vaccinated but want to wait and see how others fare first. For some, the problem is no transportation to vaccination sites, no internet to get information on where and when to get vaccinated, or no regular physician. However, the shots are free and you don't need a doctor to get them.

Some U.S. polls and statistics show hesitancy in some communities of color is falling, though vaccination rates are still highest among white people. In Chicago, the gap has narrowed but rates for first doses are 36% white people, 30% Hispanic people and 24% Black people.

Simmons is on a mission to change that.

Getting the information out

On a chilly March Saturday, his battleground was a laundromat in a working-class neighborhood southwest of downtown Chicago. Saint Anthony Hospital had set up a makeshift center where recruits gathered as outreach workers took down contact information and arranged appointments. 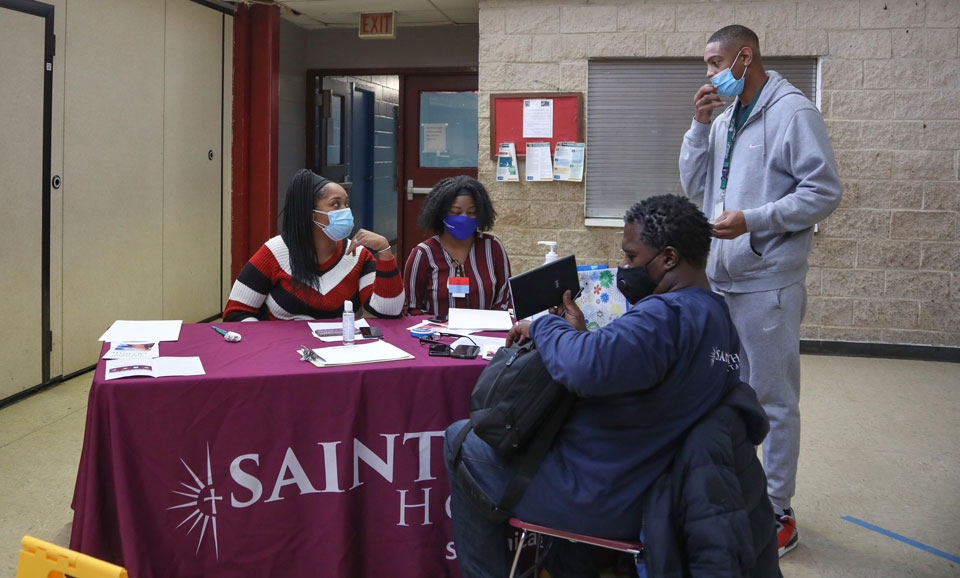 His shirt was the first pitch, emblazoned with the words, “It’s Worth the Shot,’’ and an image of a syringe. Next he offered to sign her up. McClinton shook her head no and listed her reasons.

She hasn't been sick, she said, and no one in her family has gotten COVID-19. “It might cause me to have complications," she added. Simmons accepted that and walked away.

But he returned a few minutes later, apologizing “if I caught you off guard,’’ and told her: “I was just really interested in why you aren’t interested.’’ She said she doesn’t trust the shots and declined his pamphlets.

“You don’t want to be really pushy,’’ Simmons said later. “You got to be a good judge of character too.’’

C.B. Johnson, who runs a Chicago drug recovery group in the Black neighborhood where he grew up, is helping people there get vaccinated. He said that insider cred helps. So does patience. 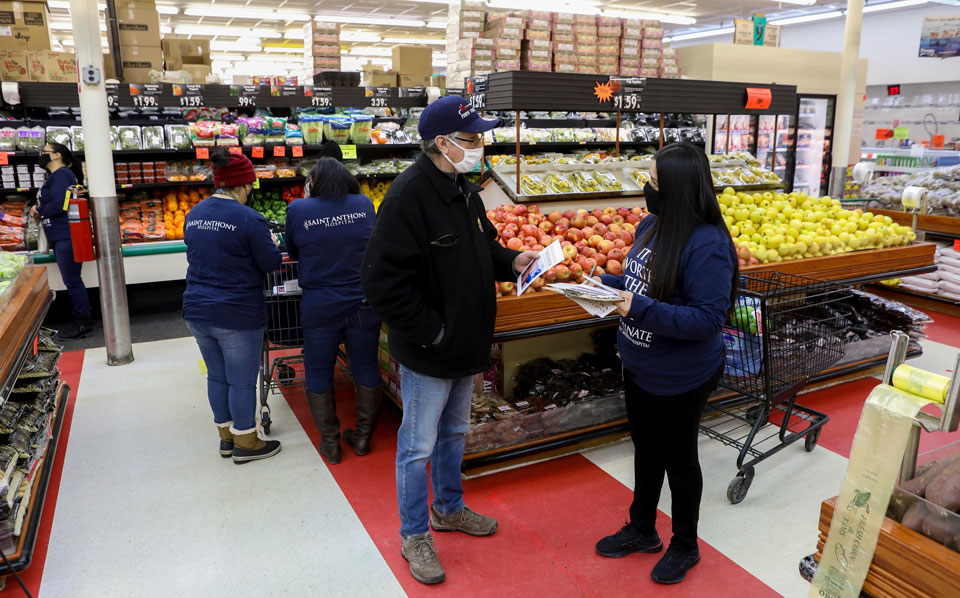 Alberto Raygoza, left, talks with Saint Anthony Hospital outreach worker Patricia Palato at a Chicago grocery store on Wednesday, Feb. 17, 2021. She approached Raygoza as he shopped for produce and made a vaccination appointment for him. In a race to boost vaccination rates as COVID-19 variants spread, U.S. communities are working to overcome mistrust and improve access among people of color. (AP Photo/Teresa Crawford)“When you listen to what their concerns are and you hear them out and you validate their concerns, and then you come back and explain to them, ‘Hey, look, I mean what happens if you catch COVID? Would you rather have the vaccine that helps you?’”

Community activist Debra Stanley helps lead a support group for former drug users and ex-offenders in South Bend, Indiana. Vaccination was the topic at a recent meeting, and skeptics spoke up.

Stanley gently chided in responding: “Darryl got his information from CDC, you got yours from Facebook. Know your sources.’’

Still, McKinney said he doesn’t trust the U.S. government and won’t get vaccinated.

“Last time I was at my barber, a few guys were talking about it,’’ McKinney said. “We’re not going to be guinea pigs.’’

Stanley said she’s not out to twist arms.

“Our whole thing is staying abreast of all the information and making sure the latest gets to the people,’’ she said. “We don’t ever believe it’s our role to promote a decision. It is our role to ensure that people have the best information when they get ready to make their decision.’’

Chandler said later that the meeting “made me more aware. Now I’m looking at it as, well, I may as well get the shot because it will help the rest of the community to not get sick.’’

Back at the Chicago laundromat, Simmons scored a win with Theopulis Polk, a 62-year-old demolition worker he approached on the sidewalk. The gray-bearded Black man readily agreed to sign up. Inside, he retrieved a wad of dog-eared paper scraps from the pocket of his faded green coveralls, fumbling to find the one where his phone number was scrawled.

“I’ve been wanting to get vaccinated but I don’t have no primary doctor,’’ Polk said. He said he knows people who’ve died from COVID-19, and works around people who don’t wear masks. He lives in this neighborhood, so getting to the vaccination site at nearby Saint Anthony’s won’t be difficult.

“I’m scared of needles. I hate to get any kind of shots. But you have to,’’ Polk said. “I’m not worried because I’ve got God on my side.’’