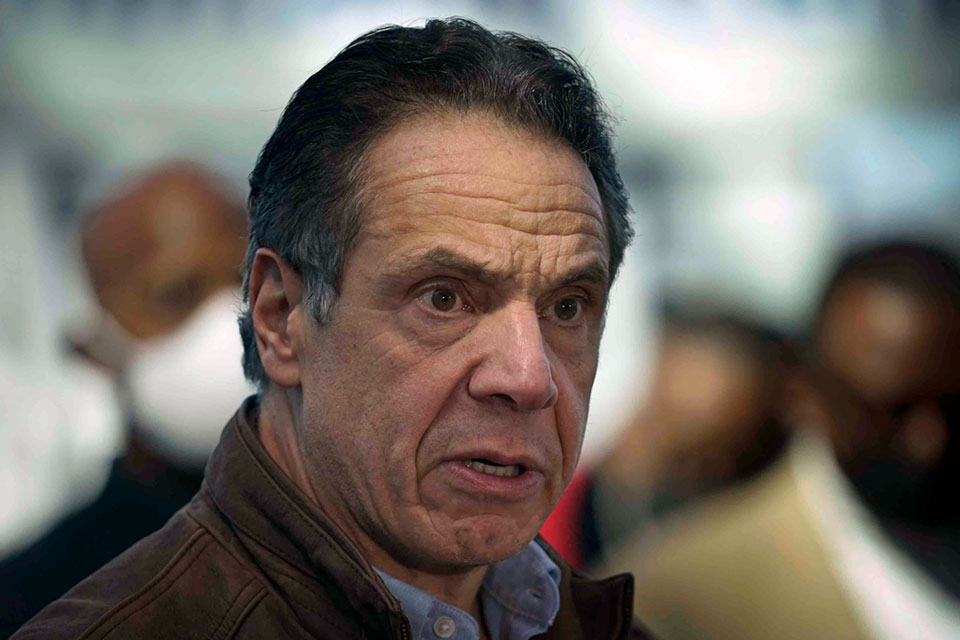 Cuomo's growing list of detractors now covers virtually every region in the state and the political power centers of New York City and Washington. His allies insist he will not resign, but as allegations of sexual harassment grow, his political isolation has reached unprecedented levels.

“The victims of sexual assault concern me more than politics or other narrow considerations, and I believe Governor Cuomo must step aside," said Rep. Sean Patrick Maloney, a New York Democrat who leads his party's House campaign arm.

Prominent progressive Rep. Alexandria Ocasio-Cortez, a New York Democrat, said she believes the women who have accused the three-term Democratic governor of wrongdoing.

This morning, @AOC and I called for Governor Andrew Cuomo’s resignation. You can read our full statement below: pic.twitter.com/KA1vfZkLOx

“After two accounts of sexual assault, four accounts of harassment, the Attorney General’s investigation finding the Governor’s admin hid nursing home data from the legislature and public, we agree with the 55+ members of the New York State legislature that the Governor must resign,” Ocasio-Cortez tweeted.

Cuomo has denied he ever touched anyone inappropriately and has said he’s sorry if he ever made anyone uncomfortable.

He is scheduled to address the state's pandemic relief efforts on Friday afternoon.

The escalating scandal jeopardizes Cuomo's 2022 reelection in an overwhelmingly Democratic state, but also threatens to cast a cloud over President Joe Biden's earliest days in office. Republicans across the country have seized on the growing allegations against Cuomo to try to distract from Biden's success with the pandemic and challenge his party's well-established advantage with female voters.

The governor in recent days has been calling lawmakers and supporters asking them to refrain from calling for his resignation, and instead support the ongoing investigations. His strategy does not appear to be working.

The state Assembly allowed an impeachment investigation into Cuomo on Thursday as lawmakers investigate whether there are grounds for his forcible removal from office.

Along with an allegation that the governor groped a female aide at the Executive Mansion last year, Cuomo is facing allegations of sexually suggestive remarks and behavior toward women, including female aides. One aide said he asked her if she would ever have sex with an older man. And another aide claimed the governor once kissed her without consent, and said governor’s aides publicly smeared her after she accused him of sexual harassment.

In weeks past, calls for the governor’s impeachment or resignation have come from Republicans or left-leaning Democrats in New York City. But more Democratic lawmakers from surrounding and upstate communities have joined in as the week progressed.

A majority of state lawmakers and more than half of New York’s Democratic congressional members are now calling for him to step down.

Nadler said Cuomo has lost the confidence of New Yorkers.

“The repeated accusations against the governor, and the manner in which he has responded to them, have made it impossible for him to continue to govern at this point,” Nadler said.

New York Democrats also pointed to sweeping criticism of Cuomo for keeping secret how many nursing home residents died of COVID-19 for months. The governor has claimed his administration had to verify deaths of residents at hospitals, but critics question why that hasn’t held up the release of data in other states.

The 63-year-old governor is seeking his fourth four-year term next year. New York has no term limits. He has touted his administration’s passage of liberal goals such as same-sex marriage as evidence that his hard-nosed approach to politics works.

Yet Cuomo has increasingly faced criticism that he’s too often aggressively wielded his power to bolster his own image rather than to benefit New Yorkers.

A state attorney general report in January correctly estimated that his administration had yet to reveal thousands of deaths among nursing residents to COVID-19, while a Democratic assemblyman accused the governor of bullying and threatening him for speaking up against the governor.

In recent days, more moderate Democrats in New York have raised concerns about the allegations against Cuomo, who has long enjoyed support from suburban and centrist voters. On Friday, a bloc of five moderate Democrats from Long Island called for Cuomo to step aside, at least until the attorney general's investigation is complete.

The Long Island lawmakers said the allegations “are beyond troubling and describe a disturbing pattern of behavior that also now includes a potentially criminal act.”

“The governor cannot lead the state while faithfully responding to multiple investigations," they wrote.