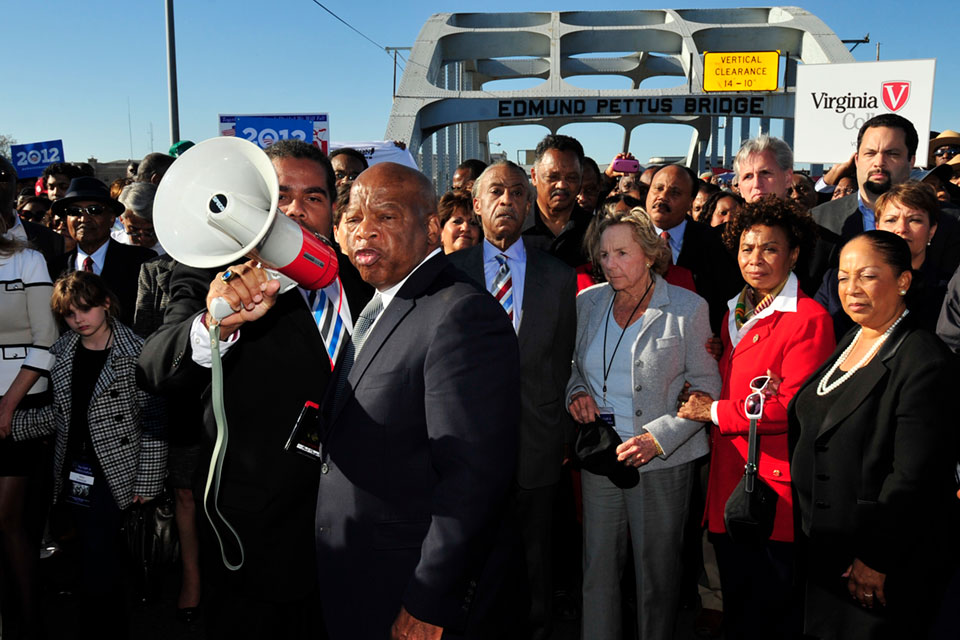 SELMA, Ala. (AP) — Activists who gathered virtually and in person to commemorate a pivotal day in the civil rights struggle that became known as Bloody Sunday called on people to continue the fight for voting rights as they also honored giants of the civil rights movement, including the late U.S. Rep. John Lewis, who died last year. 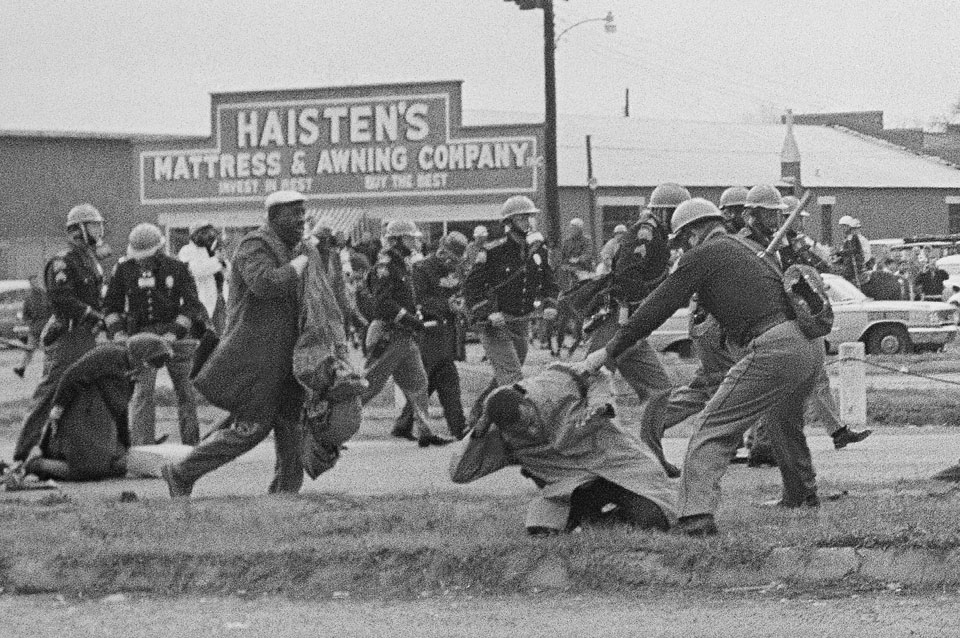 In this March 7, 1965, file photo, a state trooper swings a billy club at John Lewis, right foreground, chairman of the Student Nonviolent Coordinating Committee, to break up a civil rights voting march in Selma, Ala. The March 7, 2021, Selma Bridge Crossing Jubilee will be the first without the towering presence of Lewis, as well as the Rev. Joseph Lowery, the Rev. C.T. Vivian and attorney Bruce Boynton, who all died in 2020. (AP Photo/File)The day became a turning point in the fight for voting rights. Footage of the beatings helped galvanize support for passage of the Voting Rights Act of 1965.

This year’s commemoration comes as some states seek to roll back expanded early and mail-in voting access and efforts have been unsuccessful to restore a key section of the Voting Rights Act that required states with a history of discrimination to get federal approval for any changes to voting procedures.

Many speakers throughout the day's events emphasized the need for continued activism to protect voting access. 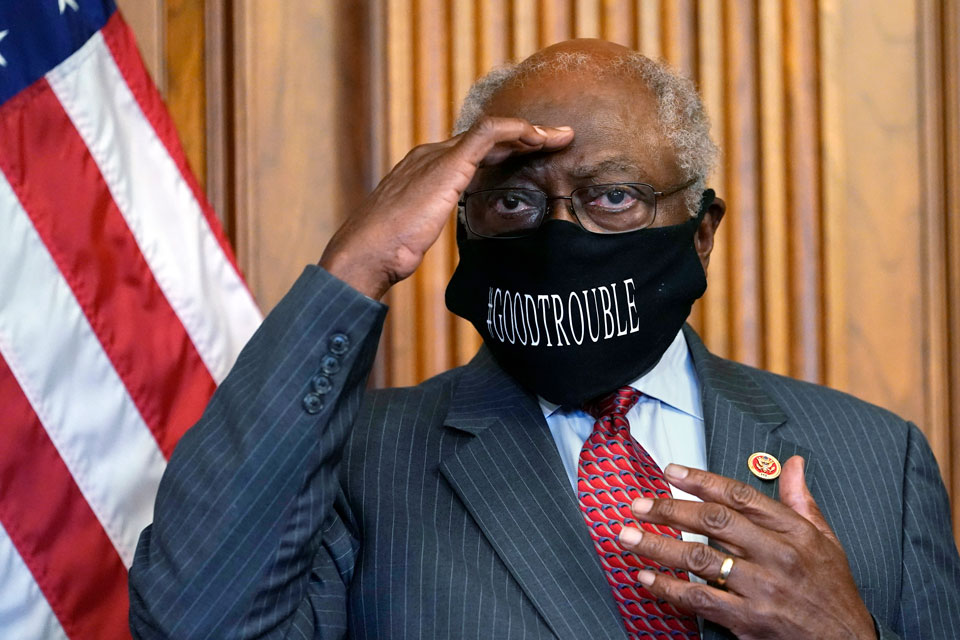 In this Sept. 17, 2020, file photo, House Majority Whip James Clyburn, of S.C., shields his eyes from a television light during a news conference about COVID-19, on Capitol Hill in Washington. Clyburn, a member of the Selma Bridge Crossing Jubilee's honorary committee, believes one way to honor the memory of Lewis and others is to enact the John Lewis Voting Rights Act, to strengthen protections granted under the Voting Rights Act of 1965 and protect against racial discrimination and vote suppression. (AP Photo/Jacquelyn Martin, File)“Voter suppression is still alive and well," said U.S. Rep. Teri Sewell, a Democrat who represents the 7th Congressional District which includes Selma.

“It reminds us that progress is elusive and every generation must fight and fight again.”

Sewell spoke during a video that featured comments from activists, mayors, members of Congress and others about the historic anniversary. Later, organizers played video footage of activists, many who had been part of the original Bloody Sunday events in 1965, crossing the bridge once again. They wore masks and in keeping with social distancing requirements designed to stop the coronavirus, spread out across the bridge as they walked.

The event typically brings thousands of people to Selma. However, most of the events were held virtually this year because of the COVID-19 pandemic. 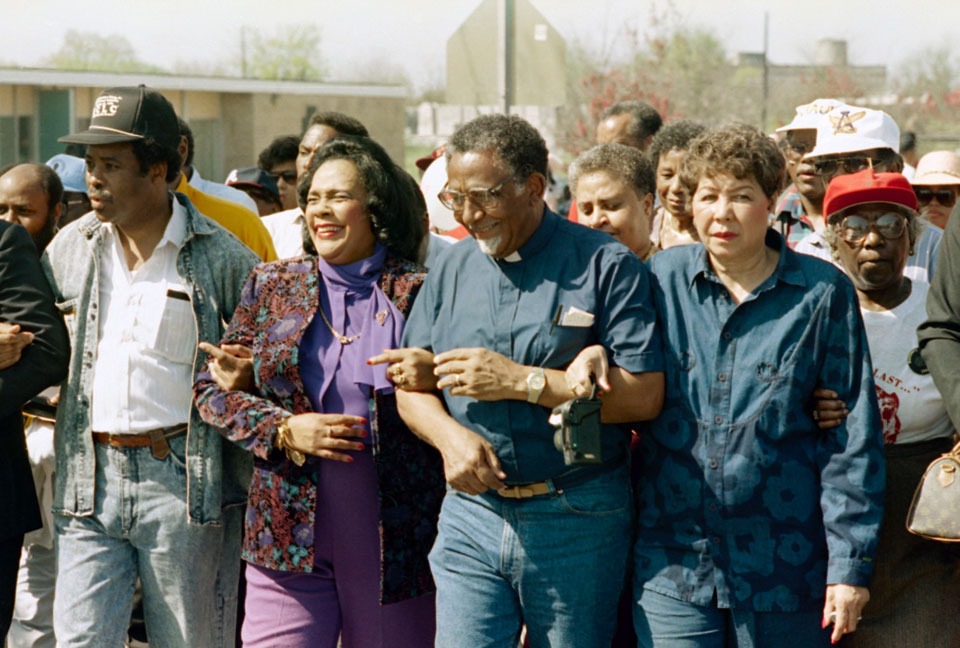 In this March 4, 1990, file photo, Coretta Scott King walks arm-in-arm with Southern Christian Leadership Conference President Joseph Lowery, second from right, in Selma, Ala., as marchers begin the final leg of their trek to the Alabama Capitol. The March 7, 2021, Selma Bridge Crossing Jubilee will be the first without the towering presence of John Lewis, as well as Lowery, the Rev. C.T. Vivian and attorney Bruce Boynton, who all died in 2020. (AP Photo/Dave Martin, File)The annual Martin & Coretta King Unity Breakfast was held as a drive-in event. The outdoor event included some in-person speakers such as Rev. Bernard LaFayette, and the founders of the group Black Voters Matter. Cliff Albright, one of the group's founders, spoke about the continued need to fight for voter access.

“The movement is not over," he said as people in their cars honked in support.

“Every eligible voter should be able to vote and have that vote counted,” Biden said. “If you have the best ideas, you have nothing to hide. Let the people vote.” 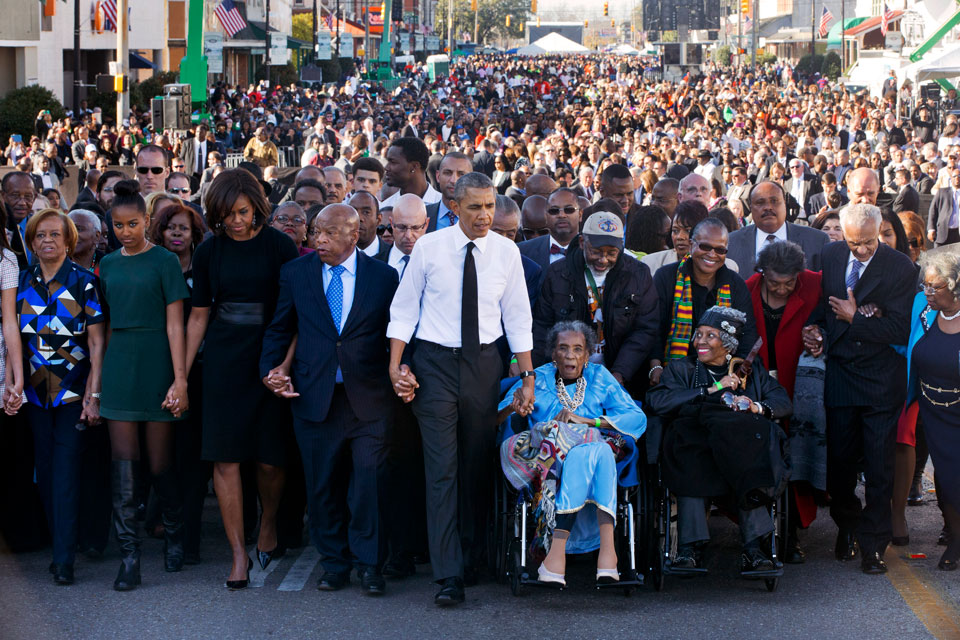 In this March 7, 2015, file photo, President Barack Obama, center, walks as he holds hands with Amelia Boynton Robinson, who was beaten during "Bloody Sunday," as the first family and others including Rep. John Lewis, D-Ga., left of Obama, walk across the Edmund Pettus Bridge in Selma, Ala., for the 50th anniversary of "Bloody Sunday," a landmark event of the civil rights movement. From front left are Marian Robinson, Sasha Obama, first lady Michelle Obama, Obama, Boynton and Adelaide Sanford, also in wheelchair. (AP Photo/Jacquelyn Martin, File)Lowery, a charismatic and fiery preacher, is often considered the dean of the civil rights veterans and led the Southern Christian Leadership Conference.

Vivian began organizing sit-ins against segregation in the 1940s and later joined forces with the Rev. Martin Luther King Jr. In 1965, Vivian led dozens of marchers to a courthouse in Selma, confronting the local sheriff on the courthouse steps and telling him the marchers should be allowed to register to vote. The sheriff responded by punching Vivian in the head.

Boynton was arrested for entering the white part of a racially segregated bus station in Virginia, launching a chain reaction that ultimately helped to bring about the abolition of Jim Crow laws in the South. Boynton contested his conviction, and his appeal resulted in a U.S. Supreme Court decision that prohibited bus station segregation.

His case inspired the Freedom Riders of 1961 — a group of young activists who went on bus rides throughout the South to test whether court-ruled desegregation was actually being enforced. They faced violence from white mobs and arrest by local authorities.

Organizers acknowledged the fallen civil rights leaders and planned to lay wreaths at the bridge in their honor.

The march across the Selma bridge was sparked by events in nearby Marion, where a Black man had been killed by a white Alabama state trooper during peaceful protests for voting rights. Jimmie Lee Jackson, a 26-year-old church deacon, was shot while trying to protect his mother from being hurt and died eight days later. In response, activists in Marion and Selma gathered for a march on March 7, their goal the state capital in Montgomery.

Although the Jackson case occurred in 1965, it has particular resonance in 2021 as the state of Minnesota prepares to try former Minneapolis police officer Derek Chauvin in the death of George Floyd, an African American. Floyd died after Chauvin, who is white, pressed his knee onto Floyd’s neck while Floyd was held face-down on the ground in handcuffs, saying he couldn’t breathe. Body camera footage indicates Chauvin’s knee was on Floyd’s neck for about nine minutes. Floyd was later pronounced dead at a hospital.