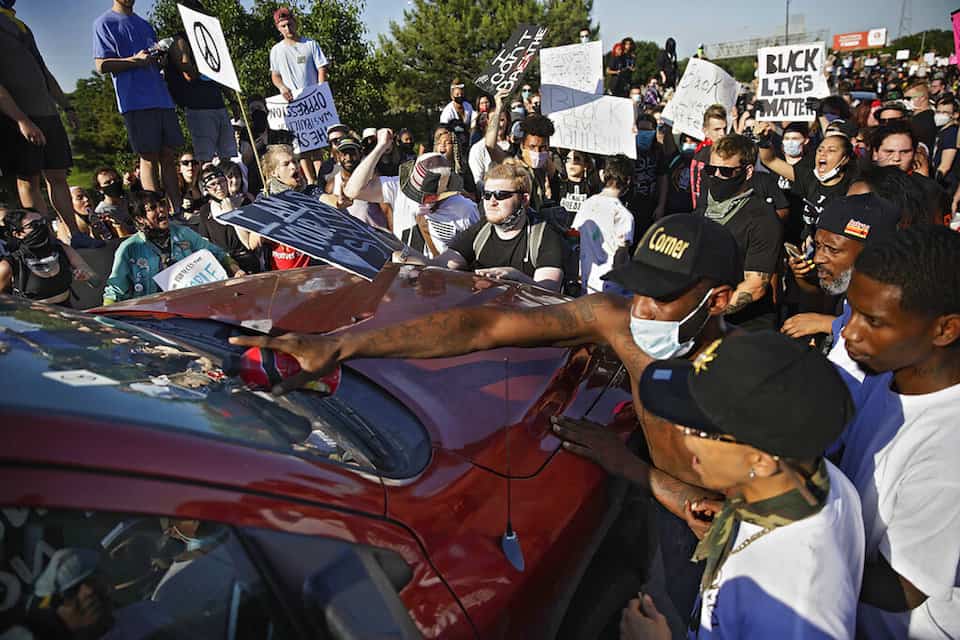 OKLAHOMA CITY (AP) — When massive demonstrations against racial injustice erupted across the nation last summer, protesters used an increasingly common tactic to draw attention to their cause: swarming out onto major roads to temporarily paralyze traffic.

This method sometimes resulted in searing images of drivers plowing through crowds, causing serious injuries and in some cases, deaths.

Now, Republican politicians across the country are moving to stop the road-blocking maneuver, proposing increased penalties for demonstrators who run onto highways and legal immunity for drivers who hit them.

The bills are among dozens introduced in Legislatures aimed at cracking down on demonstrations.

“It’s not going to be a peaceful protest if you’re impeding the freedom of others,” said Rep. Kevin McDugle, the author of an Oklahoma bill granting criminal and civil immunity to people who drive into crowds on roads.

“The driver of that truck had his family in there, and they were scared to death."

He referred to an incident in July in which a pickup truck pulling a horse trailer drove through Black Lives Matter protesters on Interstate 244 in Tulsa.

Three people were seriously injured, including a 33-year-old man who fell from an overpass and was left paralyzed from the waist down.

Debate on limits of protest

Tumultuous demonstrations by left-leaning and right-leaning groups have stirred new debate about what tactics are acceptable free speech and which go too far. In addition to blocking roads,

Black Lives Matter demonstrators have taken over parks and painted slogans on streets and structures, while right-wing groups have brandished firearms and stormed capitol buildings. Local authorities' responses have wavered as they try to avoid escalating conflicts.

Now legislators in Iowa, Missouri, Oklahoma, Utah and about a dozen other states have introduced new counterprotest measures.

The traffic-blocking tactic has attracted the most concern because of the obvious hazard.

In one particularly chilling incident in Minneapolis, a large tanker truck drove at high speed through thousands of protesters gathered on a closed highway.

Remarkably, no one was seriously hurt, though a criminal complaint says at least one protester suffered abrasions.

Mark Faulk, a longtime Oklahoma activist who was arrested last year for blocking a roadway, said dramatic tactics are necessary to get people's attention.

“The idea of escalating it to the point where you disrupt the convenience of the citizens and of the status quo, you have to do that sometimes to make a point," Faulk said.

But Carmyn Taylor, 20, recalled the sight of a pickup truck bearing down on protesters spread across the six-lane I-244 in Tulsa.

“The most vivid thing I remember is when I got pulled to the ground. I remember seeing both sets of wheels run over my legs, which was a little traumatizing," said Taylor, who suffered a broken leg and a sprained ankle.

“For the first two weeks after the accident, I couldn't walk."

Not all drivers prosecuted

In Seattle, Summer Taylor, 24, was killed and another person was seriously injured in July when a man drove his car into protestors on a closed Seattle freeway.

A graphic video posted on social media showed the car swerving around several parked cars and slamming into the two protesters, sending them flying into the air.

In an incident in St. Louis in May, a 29-year-old man was dragged to his death beneath a tractor-trailer that drove into a sign-carrying group on a road.

Whether drivers face criminal charges in such incidents depends on the circumstances of each case, prosecutors say. The tractor-trailer driver in St. Louis has not been criminally charged, while the driver of the car in Seattle has pleaded not guilty to charges of vehicular homicide, vehicular assault and reckless driving.

District Attorney Steve Kunzweiler declined to file charges against the driver in Tulsa, saying several people in the crowd had attacked the vehicle with the driver’s children inside. But Kunzweiler stopped short of endorsing proposals for harsher penalties for protestors or blanket immunity for drivers.

“There are any number of laws already in place that are readily available to be enforced,” he said.

A bill granting drivers immunity for hitting protestors easily cleared an Oklahoma Senate committee recently on a 8-1 vote. Two others are pending in the state House.

But critics say the proposals are only designed to intimidate people, not to solve a problem.

“The biggest concern is that they chill speech and they chill folks gathering to protest,” said Nicole McAfee, policy director for the Oklahoma chapter of the American Civil Liberties Union.

About 50 people were arrested during several days of protests in Tulsa and Oklahoma City.

Most of the arrests were for disorderly conduct, a misdemeanor punishable by up to a year in jail, and rioting, a felony that carries a maximum penalty of 10 years in prison.

At least two men accused of burning a sheriff's van were charged under the state's anti-terrorism law, a felony that carries a sentence of up to life in prison. Those cases are pending.

Proposals in Oklahoma would increase the criminal penalties for blocking a roadway, including one making it a felony punishable by up to two years in prison, and making it more difficult for those arrested to be released from jail. Another bill would add participating in unlawful assemblies to the state's racketeering act aimed at organized crime.

State Rep. Emily Virgin, the Democratic leader in the Oklahoma House, said she wishes her Republican colleagues would focus on the underlying issues of police brutality and systemic racism instead of seeking ways to punish protesters.

“It seems that some of my colleagues took the wrong lesson from the demonstrations we saw this summer,” Virgin said.