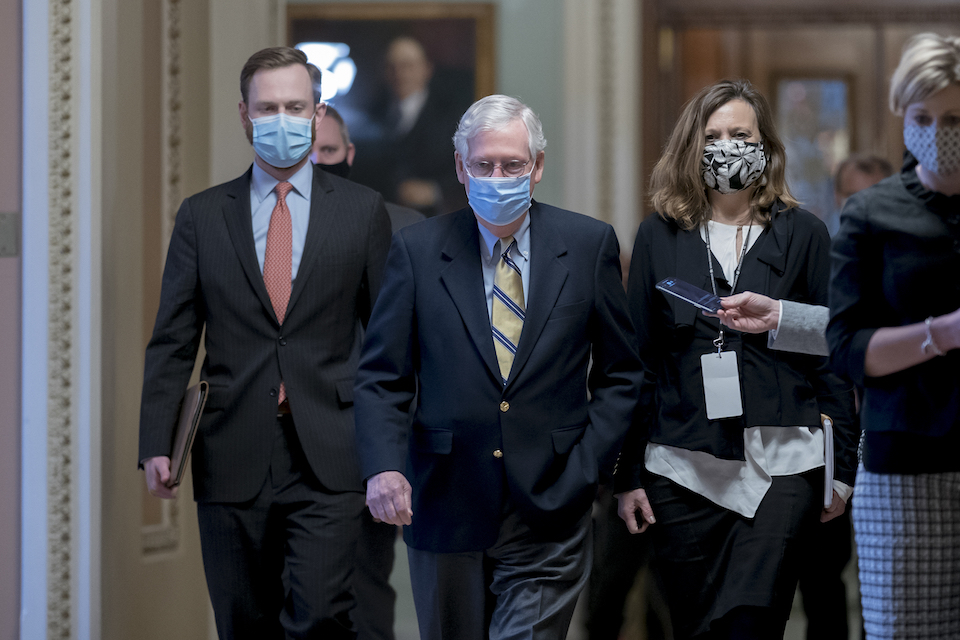 After he incited a deadly riot at the U.S. Capitol last month, the GOP considered purging the norm-shattering former president. But in the end, only seven of 50 Senate Republicans voted to convict Trump in his historic second impeachment trial on Saturday.

For Trump’s loyalists, the acquittal offers a vindication of sorts and a fresh connection to the former president's fiery base. And for Trump’s GOP antagonists, it marks another alarming sign that the party is lurching further in a dangerous direction with little desire to reconnect with the moderates, women and college-educated voters Trump alienated.

Ultimately, the resolution of the impeachment trial brings into clear relief a divide in the GOP that party leaders, donors and voters will have to navigate as they try to regain control of Congress next year and aim to retake the White House in 2024.

That tension was on display in the immediate aftermath of the vote. After supporting Trump's acquittal, Senate Minority Leader Mitch McConnell, R-Ky., delivered a speech that echoed some of the very points Democratic impeachment managers emphasized in seeking Trump's conviction.

The former president, McConnell said, was “practically and morally responsible for provoking the events” that led to the insurrection. But he argued that there were no constitutional grounds for the Senate to convict Trump now that he's out of office, a procedural point embraced by many in the GOP.

The history books will show that 10 members of the president's party in the House and another seven in the Senate ultimately voted that Trump's behavior was egregious enough to warrant conviction — and even a lifetime ban on holding future office. Never before have so many members of a president’s party voted for his removal.

But by most objective measures, Trump's grasp on the GOP and its future remains airtight.

Lest their be any doubt about Trump's strength, House Republicans voted overwhelmingly last week to defend a diehard Trump loyalist, Rep. Marjorie Taylor Greene, R-Ga., even after evidence surfaced that she had repeatedly embraced violence, bigotry and conspiracy theories on social media.

Just days after House Minority Leader Kevin McCarthy called Trump responsible for the violent attack, McCarthy reversed himself and made a personal visit to Trump's Florida estate to ensure there was no lingering animosity.

Of the seven Republicans who voted to convict Trump on Saturday, only one faces reelection in the next four years.

Indeed, in Trump's Republican Party, there are very few willing to cross him if they harbor future political ambitions.

One of them, 2024 prospect Nikki Haley, who was U.S. ambassador to the United Nations under Trump, drew attention this week after telling Politico that Trump's role in the Jan. 6 attack essentially disqualified him from running for office again.

Another Republican presidential prospect, Sen. Ben Sasse, R-Neb., voted to convict Trump on Saturday, declaring that Trump's “lies” about widespread voter fraud endangered “the life of the vice president" and are "bringing us dangerously close to a bloody constitutional crisis.”

While Sasse may run for president in 2024, he won't face Republican primary voters in Nebraska again unless he chooses to run for reelection in 2026.

Similarly, GOP Sen. Bill Cassidy of Louisiana faced a censure by his state party after voting to convict Trump. But he won’t face voters again until 2026 so is relatively insulated from political consequences.

Lincoln Project has its own challenges

Despite McConnell's criticism, Trump's most vocal Republican opponents at this point will likely consist of a collection of retired Republicans on cable news and a “Never Trump” movement grappling with its own existential challenges.

The Lincoln Project, perhaps the most prominent and best-funded anti-Trump Republican group, is coming off a tumultuous week following revelations that its leaders knew about multiple allegations of sexual misconduct against a co-founder several months before acknowledging them publicly.

The self-described “senior leader” of the organization, veteran Republican strategist Steve Schmidt, stepped down from the board on the eve of the Senate impeachment vote, a day after the Lincoln Project announced plans to bring in an outside investigator.

The fallout threatens to undermine the organization's fundraising appeal and its influence, even as the super PAC works to expand its reach through a popular podcast and expanding streaming video channel that drew more than 4 million views last month alone.

Even before the crisis, co-founder Reed Galen acknowledged that Trumpism was winning.

“The authoritarian side of the Republican Party is the dominant side,” he said. “They have the momentum. For now, they have the money.”

Sarah Longwell, a Republican strategist who leads the anti-Trump group known as Defending Democracy Together, said that "what the last two months have shown is if Donald Trump was a cancer on the country and the party, he’s metastasized.”

“I thought we could push past him," she said. "But now I don’t think that.”

Still, the Republican Party faces tremendous political risks should its leaders continue to embrace Trump and his brand of norm-shattering politics.

Already, scores of Republican-friendly businesses have vowed to stop giving money to Trump's allies in Congress, cutting off a critical revenue stream just as Republicans hope to reclaim the House and Senate majorities in next year's midterm elections.

Trump's critics in both parties are vowing to make sure the business community and voters alike do not forget what the former president and his allies did.

Despite his acquittal Trump isn't in the clear yet. No longer protected by a Justice Department opinion against the prosecution of sitting presidents, he now faces multiple, ongoing criminal investigations.

In Georgia, the Fulton County district attorney has opened a criminal investigation into “attempts to influence” the election, including Trump's call to Secretary of State Brad Raffensperger demanding that the official find enough votes to overturn Biden’s victory.

In New York, Attorney General Letitia James is investigating whether Trump and his company improperly inflated the value of his assets on annual financial statements in order to secure loans and obtain tax benefits. Manhattan District Attorney Cyrus Vance Jr. continues his own investigation, which has included grand jury testimony.

“He didn’t get away with anything — yet," McConnell, R-Ky., after the vote. “We have a criminal justice system in this country. We have civil litigation. And former presidents are not immune from being accountable by either one."

McConnell voted to acquit Trump on the grounds the trial was unconstitutional because he is no longer in office, but insisted, “There’s no question — none — that President Trump is practically and morally responsible for provoking the events of the day."

That sharp rebuke from his once-loyal defender underscores how dramatically Trump's stock has fallen in Washington since his first impeachment trial just over a year ago. But the desire to be rid of Trump is not shared across the country, where Republicans who have dared to admonish him have faced swift rebuke.

Rep. Liz Cheney, R-Wyo., was forced to defend her third-in-line leadership position after she voted in favor of impeachment. On Saturday, Louisiana’s Republican Party quickly censured Sen. Bill Cassidy, one of the seven Republicans senators who voted for Trump's conviction.

In an interview Sunday with ABC’s “This Week,” Cassidy seemed at peace with his decision.

But how long Trump retains his grip remains an open question, especially with a slew of likely 2024 candidates now trying to take the mantle.

Some, like Maryland Gov. Larry Hogan, are advocating a clean break from Trump, who ended his presidency with a record low 34% approval rating according to Gallup polling. Others have stressed the need to keep his voters engaged, perhaps with candidates who trumpet the policies Trump championed, but with a less caustic style that might win back suburban voters.

In a sign of his enduring power, the Republican National Committee and other groups spent the trial sending fundraising appeals urging their followers to “Stand with Trump” and “SAVE President Trump’s Legacy,” in the words of the National Republican Congressional Committee.

“Oh, time is going to take care of that some way or another," said Sen. Chuck Grassley, R-Iowa, told reporters Saturday. "But remember, in order to be a leader you got to have followers. So we’re gonna find out, whoever leads. But everybody’s going to be involved. We’re a big tent.”

While the Senate failed to bar Trump from running again for office, many believe he has done too much damage to be a credible candidate himself in 2024.

Republican Sen. Pat Toomey of Pennsylvania, who is retiring, said Trump's refusal to accept the results of the election had “very badly damaged his reputation," eclipsing his accomplishments in office.

“Instead,” Toomey said, "he’ll be remembered throughout history as the president who resorted to nonlegal steps to try to hold on to power.”