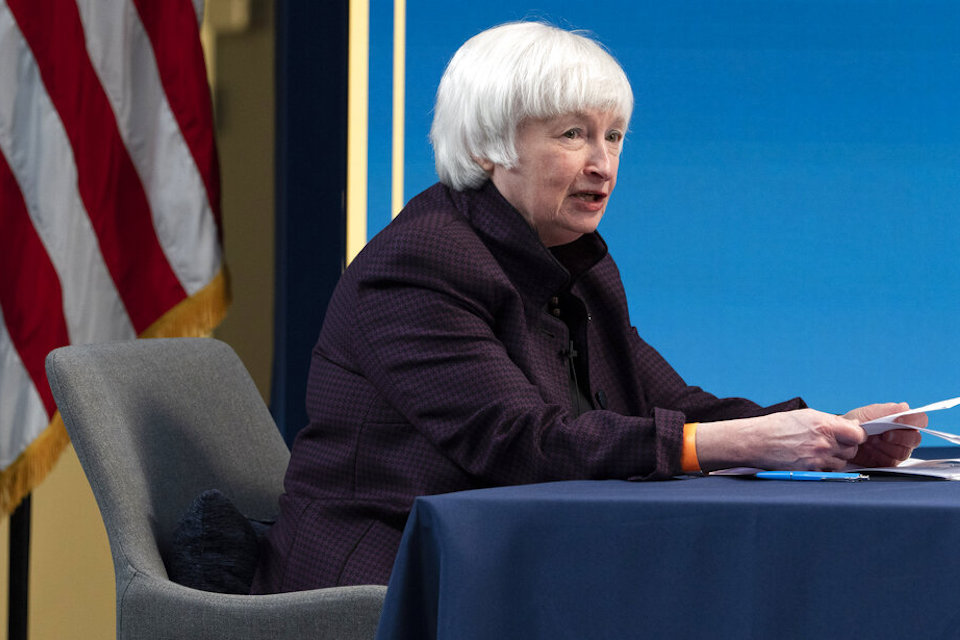 WASHINGTON (AP) — Treasury Secretary Janet Yellen said Sunday the country was still in a “deep hole” with millions of lost jobs but that President Joe Biden's $1.9 trillion relief plan could generate enough growth to restore full employment by next year.

Republican senators argued that Biden's proposal was too expensive and they cited criticism from Larry Summers, a treasury secretary under President Bill Clinton, that passage of the measure could run the risk of triggering runaway inflation.

Summers also contended that Biden's plan would make less money available for other initiatives such as improving the nation's infrastructure.

Yellen, a former Federal Reserve chair who is the first woman to lead the Treasury Department, said the central bank had the tools to handle any potential inflationary threat. She said the urgent need now was to deal with the problems raised by the pandemic-induced recession: as joblessness, lost small businesses and reopening schools.

“We face a huge economic challenge here and tremendous suffering in the country. We have got to address that," Yellen said. "That's the biggest risk.”

Dems aim to pass bill before unemployment benefits run out

The House and Senate this past week approved the legislation necessary to pass Biden's package through a process known as reconciliation, which only requires 51 votes in the Senate.

The Senate is split 50-50, with Vice President Kamala Harris the tiebreaking vote.

House Speaker Nancy Pelosi, D-Calif., has said she said she hopes to approve the specific budget details of the Biden proposal over the next two weeks, aiming to get the measure through Congress before current unemployment benefits run out in mid-March.

House Democrats plan to propose boosting the child tax credit, now at a maximum of $2,000, to as much as $3,600 per child annually, according to information obtained Sunday by The Associated Press. The proposal will be part of the COVID-19 relief bill they are writing that is expected to largely follow Biden’s plan.

The House Ways and Means Committee has jurisdiction over about half of Biden’s $1.9 trillion proposal, including support for workers, the jobless and people’s health care costs. The committee's Democrats were expected to release their full plan Monday.

The child tax credit increase is expected to help about 20 million lower-earning people. The Democrats’ bill will follow Biden’s proposal to increase the child credit to up to $3,600 for each child under age 6 and as much as $3,000 for those up to 17.

Under the House Democrats' plan, those amounts would begin to phase out for individual parents earning $75,000 yearly and couples making $150,000.

“This money is going to be the difference in a roof over someone’s head or food on their table,” the committee chairman, Rep. Richard Neal, D-Mass., said in a written statement. The child tax credit proposal is supported by the White House and Senate Democrats, according to House Democratic aide who was not authorized to publicly discuss private deliberations and spoke on condition of anonymity.

The child tax credit details were first reported by The Washington Post.

Fears that bill is too large

Republicans cited the warnings raised by Summers that the $1.9 trillion plan was too large and that Biden was violating his campaign promise to work with Republicans once elected.

“Larry Summers is a liberal Democrat ... in favor of big government spending and he has said, this is way too much,” said Sen. Pat Toomey, R-Pa.

Biden and his team have argued that a big economic package is needed to avoid the mistakes made in 2009 when the Obama administration was unable to get increased support through Congress, resulting in a long, slow recovery after the 2008 financial crisis.

The government reported Friday that the economy only created 49,000 jobs in January after having lost jobs in December. Yellen said the recent jobs reports raised fears that the job market is stalling with 10 million people still unemployed and 4 million who have dropped out of the labor market.

“We're in a deep hole with respect to the job market and a long way to dig out,” Yellen said.

Citing a report from the Congressional Budget Office, Yellen said the unemployment rate could remain elevated for years to come and it could take until 2025 to get unemployment back to 4%.

The jobless rate stood at a half-century low of 3.9% a year ago before the pandemic hit.

She said if Biden's relief package is approved, the country could get back to full employment by next year.

“There's absolutely no reason why we should suffer through a long, slow recovery,” Yellen said.

The Biden package as been criticized for setting the cutoff for $1,400 direct payments too high, allowing wealthier Americas to collect the payments. Yellen said the administration was willing to negotiate with lawmakers, but did not specify what that threshold should be.

Biden said in a CBS interview Friday that he believed his push to raise the federal minimum wage to $15 per hour from $7.25 probably would have to be removed in order to meet Senate rules on budget reconciliation.

But Sen. Bernie Sanders, chairman of the Senate Budget Committee, said on CNN's “State of the Union” that committee lawyers were trying to build the case that a wage increase would not violate those rules.

“People on top are doing phenomenally well,” said Sanders, I-Vt. “And yet we have literally tens of millions of Americans working for starvation wages."