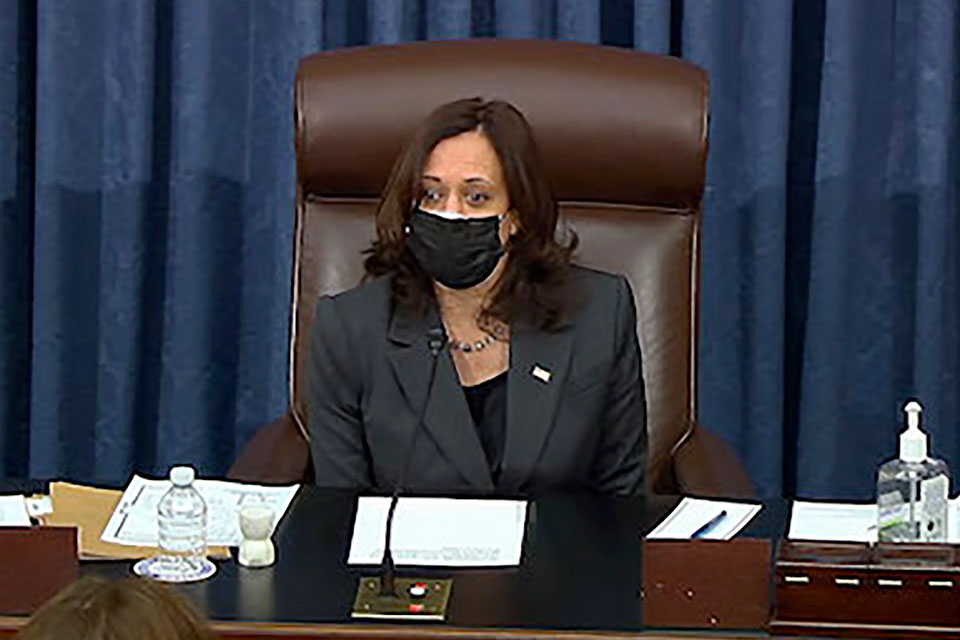 WASHINGTON (AP) — The Senate early Friday approved a measure that would let Democrats muscle President Joe Biden’s $1.9 trillion coronavirus relief plan through the chamber without Republican support. Vice President Kamala Harris was in the chair to cast the tie-breaking vote, her first.

Democrats in the chamber applauded after Harris announced the 51-50 vote at around 5:30 a.m. The action came after a grueling all-night session, where senators voted on amendments that could define the contours of the eventual COVID-19 aid bill.

The budget now returns to the House, where it will likely be approved again Friday to reflect the changes made by the Senate. Final passage will unlock the next phase in drafting of the virus relief bill, with the work divided among several congressional committees.

Senate Majority Leader Chuck Schumer D-N.Y., called passage of the resolution the “first big step to putting our country back on the road to recovery.” 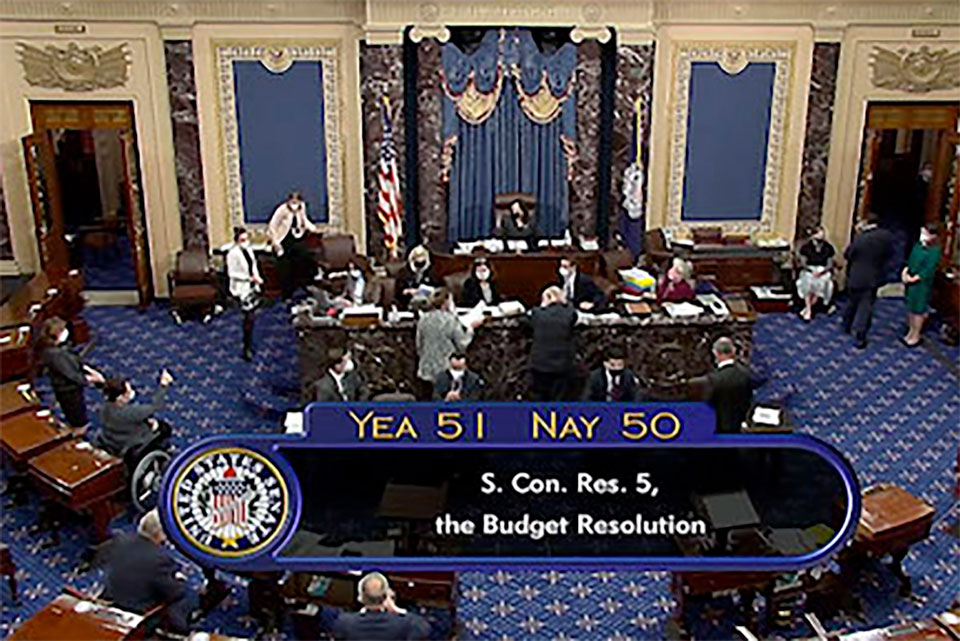 In this image from Senate TV, Vice President Kamala Harris sits in the chair on the Senate floor to cast the tie-breaking vote, her first, Friday, Feb. 5, 2021 at the Capitol in Washington. The Senate early Friday approved a budget resolution that paves the way for fast-track passage of President Joe Biden's $1.9 trillion coronavirus relief plan without support from Republicans. (Senate TV via AP)By moving on a fast track, the goal for Democrats is to have COVID relief approved by March, when extra unemployment assistance and other pandemic aid expires. It’s an aggressive timeline that will test the ability of the new administration and Congress to deliver. This means clearing the measure through the House quickly so that it can return to the Senate.

“Next week, we will be writing the legislation to create a path to final passage for the Biden American Rescue Plan, so that we can finish our work before the end of February,” House Speaker Nancy Pelosi wrote in a Friday letter to colleagues.

The unemployment rate fell to 6.3% from 6.7%, but there was a decline in the number of people who were either working or looking for a job in a sign that some people are dropping out of the labor force. The U.S. economy is 9.9 million jobs shy of its pre-pandemic level.

Biden, who has been meeting with lawmakers in recent days to discuss the package, will talk Friday at the White House with the House committee chairs who will be assembling the bill under the budget process known as “reconciliation.”

Biden also plans to make remarks Friday on the economy as he keeps up the pressure on Congress to “act big” on his relief package.

With a rising virus death toll and strained economy, the president's goal is to have COVID-19 relief approved by March, when extra unemployment assistance and other pandemic aid measures expire. Money for vaccine distributions, direct payments to households, school reopenings and business aid are at stake.

The Senate passed an amendment 99-1 that would prevent the $1,400 in direct checks in Biden's proposal from going to “upper-income taxpayers.” But the measure, led by Sens. Susan Collins, R-Maine, and Joe Manchin, D-West Virginia, is ultimately symbolic and nonbinding and does not specify at what level a person qualifies as upper income.

The marathon Senate session brought test votes on several Democratic priorities, including a $15 minimum wage. The Senate by voice vote adopted an amendment from Sen. Joni Ernst, R-Iowa, opposed to raising the wage during the pandemic. Ernst said a wage hike at this time would be “devastating” for small businesses.

None of the amendments to the budget are binding on Democrats as they draft their COVID plan, but passage of a wage increase could prove difficult. Even if a $15 wage can get past procedural challenges in the final bill, passage will require the support from every Democrat in the 50-50 Senate, which could be a tall order.

Sen. Bernie Sanders, a vocal proponent of the wage increase, vowed to press ahead. “We need to end the crisis of starvation wages,” he said.