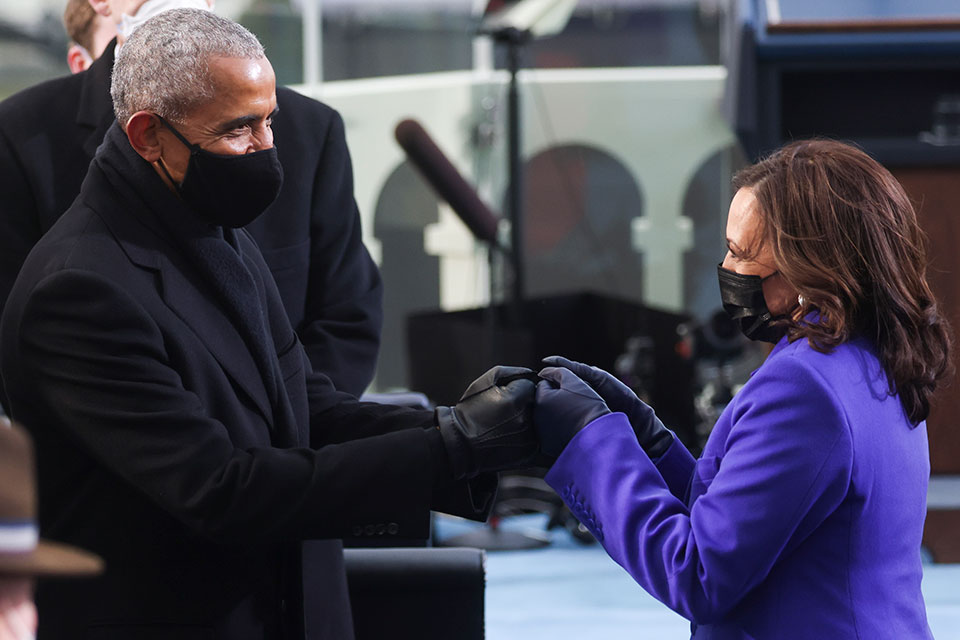 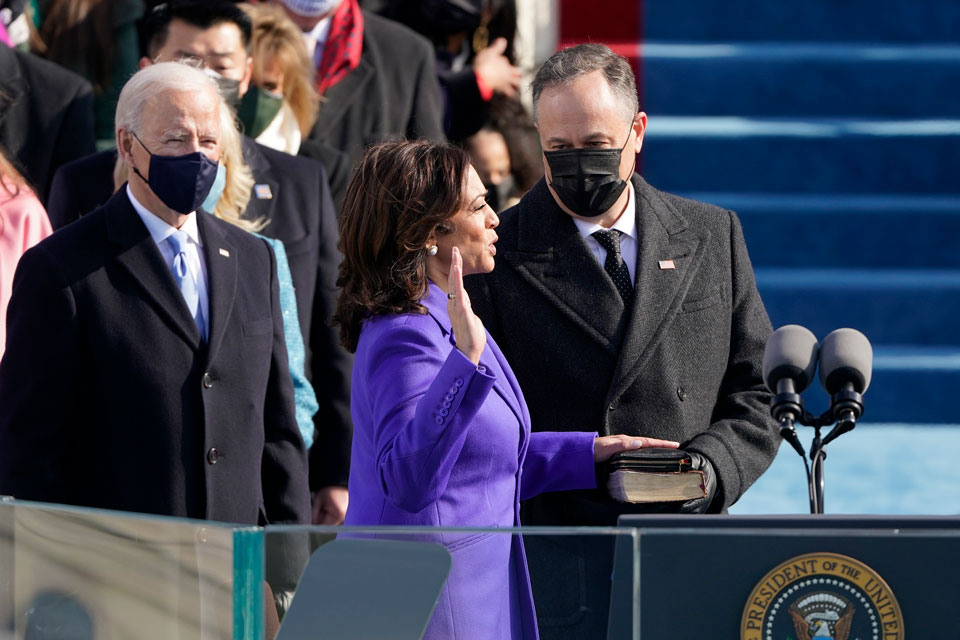 Kamala Harris is sworn in as vice president by Supreme Court Justice Sonia Sotomayor as her husband Doug Emhoff holds the Bible during the 59th Presidential Inauguration at the U.S. Capitol in Washington, Wednesday, Jan. 20, 2021. (AP Photo/Patrick Semansky, Pool)Trump's voice faded from the capital he had animated and antagonized since 2017 as he flew to private life in Florida, with his last trip on Air Force One tuned in to Biden's inauguration on television.

And quite suddenly, at least for the moment, the old ways were back: reverence of custom, rituals dating back two centuries, scenes of grace, calls for unity. 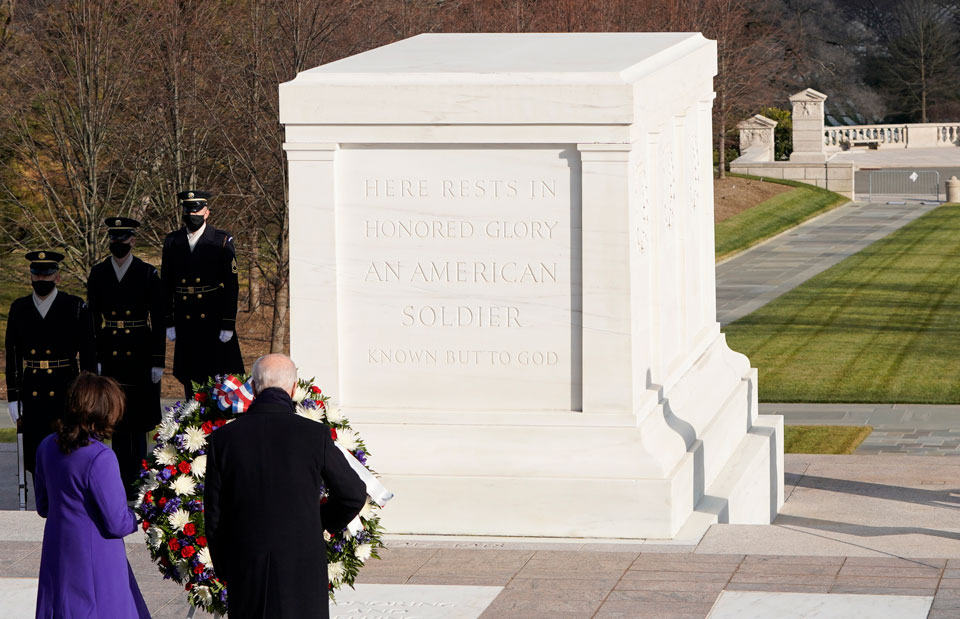 President Joe Biden and Vice President Kamala Harris pause at the Tomb of the Unknown Soldier at the Arlington National Cemetery, in Arlington, Va., Wednesday, Jan. 21, 2021. Joshua Roberts/Pool photo via AP)Four years after Trump’s dark portrayal of “American carnage,” Biden set out his intent on the same platform of the flag-bedecked Capitol to write “an American story of hope."

Masked in the Oval Office, as he'd been all day except when speaking, the new president began writing that story with his pen. He signed executive orders chipping away at Trump's legacy. One put the U.S. on track to rejoin the Paris climate accord.

As night fell, Biden leaned on Hollywood and the entertainment industry, led by Tom Hanks, to produce a television show that gave a high gloss to the president’s regular Joe persona. The programming was a pandemic-induced, no-crowd necessity that allowed the president to keep attention focused on his vision for the days ahead instead of his predecessor’s unfounded grievances about election wrongs. 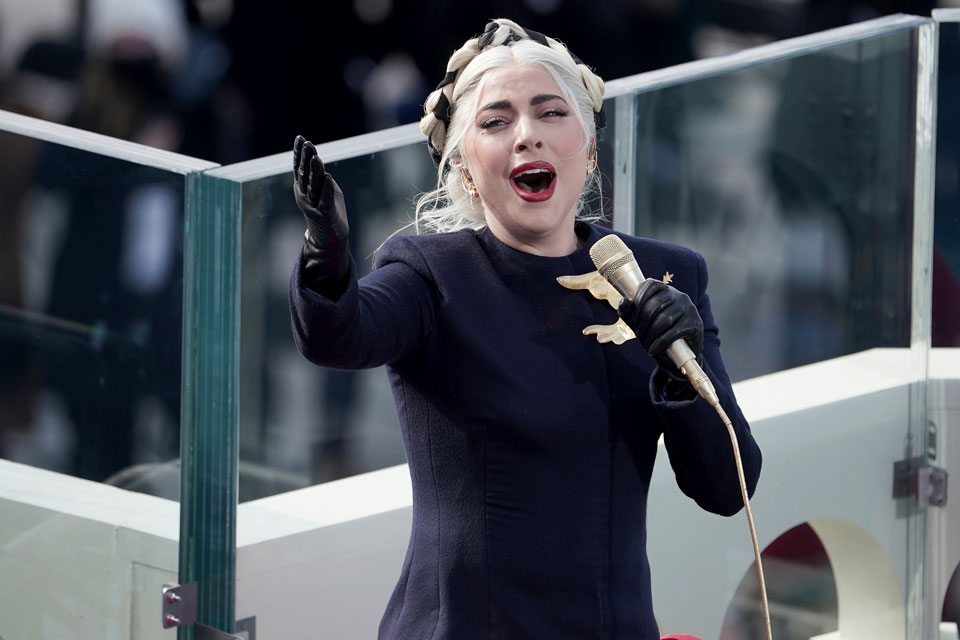 Lady Gaga sings the national anthem during the 59th Presidential Inauguration at the U.S. Capitol for President-elect Joe Biden in Washington, Wednesday, Jan. 20, 2021. (Greg Nash/Pool Photo via AP)Bruce Springsteen kicked it off, standing at the Lincoln Memorial and looking out with his guitar over the distant, illuminated Capitol across the National Mall. He sang “Land of Hope and Dreams." He had stood there in January 2009, too, then before a vast crowd lining the Reflecting Pool, to serenade the incoming President Barack Obama with “The Rising.”

The noon-time ascension of the 46th president came with poetry, trumpets, Lady Gaga singing the national anthem, Garth Brooks singing “Amazing Grace" and keen memories of the insurrection on these grounds by Trump supporters only two weeks earlier.

“Democracy has prevailed,” Biden said in his sober remarks, adding, “We must end this uncivil war.” 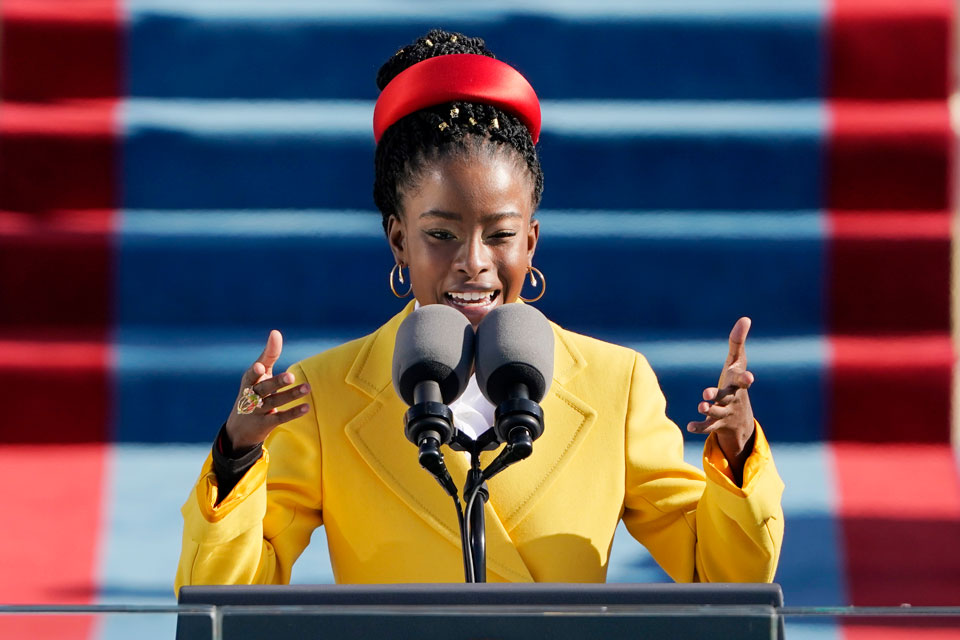 American poet Amanda Gorman reads a poem during the 59th Presidential Inauguration at the U.S. Capitol in Washington, Wednesday, Jan. 20, 2021. (AP Photo/Patrick Semansky, Pool)The bigger names may well have been upstaged by 22-year-old Amanda Gorman, whose poem spoke of a country “Where a skinny Black girl, descended from slaves and raised by a single mother, can dream of becoming president, only to find herself reciting for one.” Trump didn't summon a poet for his inauguration in 2017; not all presidents do.

Biden emerged from Blair House, the president's official guesthouse, to open his day just as Trump vanished inside the big plane at Joint Base Andrews, as if their footsteps had been choreographed. But the outgoing president was not one to coordinate anything with the incoming one.

Trump never conceded the election, declined to attend the inauguration and upended the tradition of sending a government plane to bring the president-elect to Washington. Nor did he invite the Bidens to the White House for morning coffee and tea, as the Obamas had done for the Trumps in 2017.

He hewed to one tradition, leaving a letter to his successor — a “very generous” one, Biden said without disclosing its contents right away. 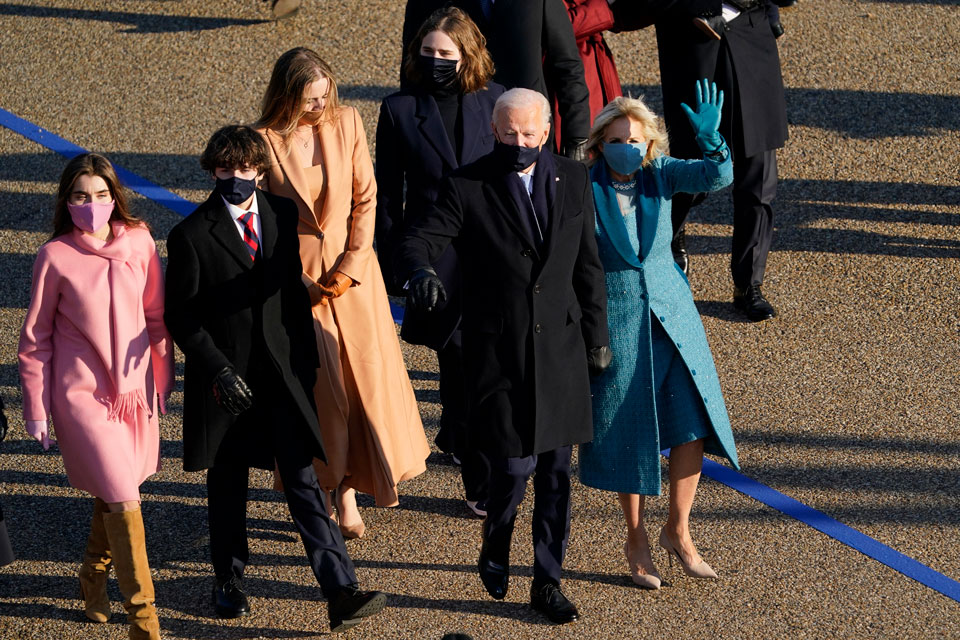 President Joe Biden and his wife Jill Biden walk in a parade during the Presidential Escort, part of Inauguration Day ceremonies, Wednesday, Jan. 20, 2021, in Washington. (AP Photo/David J. Phillip)Biden opened his presidency acknowledging former presidents on the platform, Republican and Democrat, and Trump's vice president, Mike Pence, who attended the ceremony and acknowledged Biden's victory in ways Trump never did. Biden did not offer a personal acknowledgment of the man he defeated, nor did Trump mention him. 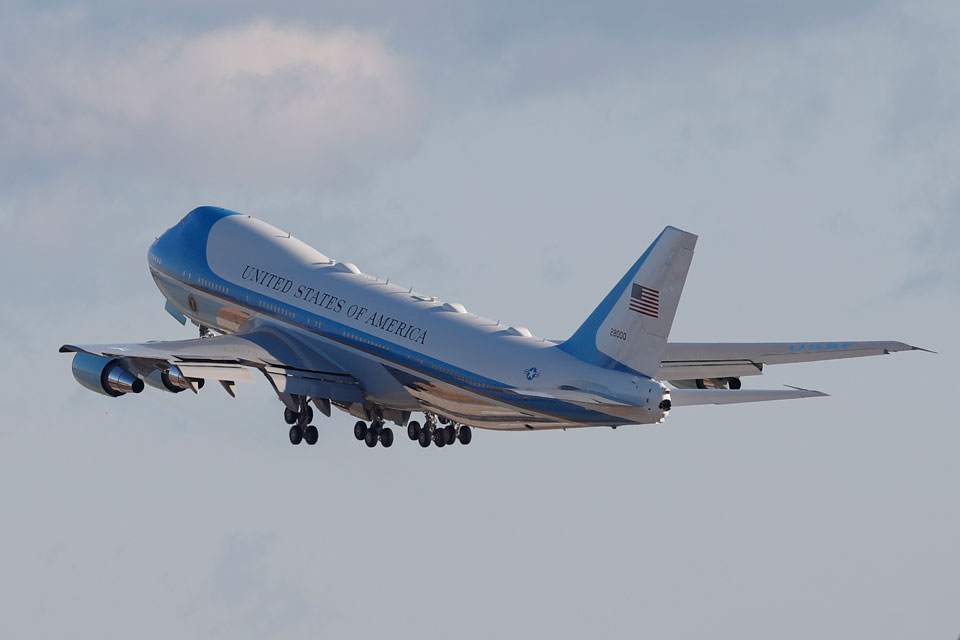 Air Force One with President Donald Trump and the first family on board, departs Andrews Air Force Base, Md., Wednesday, Jan. 20, 2021.(AP Photo/Luis M. Alvarez)Under threat of conviction from the Senate on an accusation of inciting insurrection, Trump departed with a perfunctory nod to those who have died from the coronavirus, an obligatory wish of “luck” to the next administration without mentioning Biden’s name, a premature claim on any success Biden might have reviving the economy, and the cloudy threat of a return.

“Have a nice life,” Trump said in remarks to well-wishers upon his departure. As Air Force One flew low along the coast, Biden’s inauguration played on Fox News on television aboard the flight. Trump’s family was on board. He spent some of the flight with flight staff who went up to him to say goodbye.

Rituals of the republic went on without him, though in a way never before seen. Washington got on with things, this time with masks on everyone (except Brooks), people taking care to distance from each other and some 25,000 National Guard troops and police deployed to keep the peace.

In a striking tableau at the Capitol, three former presidents and first ladies of different parties mingled as though at a cocktail party. And again, in hushed moments at Arlington National Cemetery, where Biden and Harris led a wreath ceremony at the Tomb of the Unknown Soldier while Obama, George W. Bush, Bill Clinton and spouses watched.

It was among the inaugural events where a new president and his successor normally come together but Trump had decided to skip the day's proceedings and Biden had said that was fine with him.

The inauguration crowds were sparse by design, with invitation-only guests at the immediate scene and 200,000 small flags standing in place of however many citizens would have come if the capital’s core hadn’t been under military lock and key and if no pandemic had been sweeping the country. 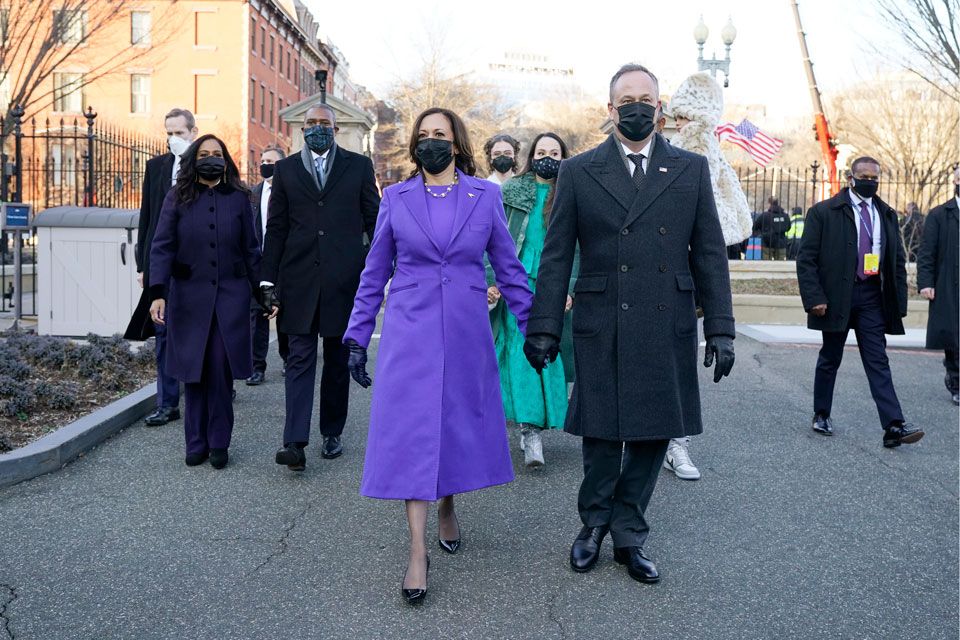 Vice President Kamala Harris, and her husband Doug Emhoff, walk during the Inauguration Day Parade Route in Washington, Wednesday, Jan. 20, 2021, after being sworn in as the 46th vice president of the United States. (AP Photo/Jacquelyn Martin)The parade to the White House in late afternoon had all of the usual pageantry and military pizazz but none of the crowds that would be normally lining the route. Biden, a famously tactile politician, had little to touch other than the hand of his wife, Jill, when he and his family walked the last leg to their new home.

He darted away a few times to the sidewalk approaching the White House, saying hello to Washington's mayor, Muriel Bowser, at one point and giving weatherman Al Roker a fist bump as they stood among the officials and journalists in the secure area.

Earlier more than 100 people waited in the cold waiting to get through a security checkpoint to reach Pennsylvania Avenue, where they hoped to catch a glimpse of the procession. Many had to watch on their phones.

“We’ve turned the page,” said Vernal Crooms, who attended Howard University when Harris studied there but didn’t know her. He was happy to see the Trump era end.

“Light prevailed,” he said, "and the lie didn’t last.”

Raelyn Maxwell of Park City, Utah, came with an American flag, a poster board sign reading “Dear Women of Color, thank you” and a bouquet of roses she hoped to toss to Kamala Harris if she could somehow get close enough to the new vice president.

“I protested 45’s inauguration,” she said of Trump, the 45th president, “and I wanted to be here when he left. “And I wanted to celebrate the new president.” She also carried Champagne to toast the occasion with friends here from France.

Biden, the second Roman Catholic president, attended a morning mass at St. Matthews Church with at least three Baptists — Harris and Republican leaders Mitch McConnell from the Senate and Kevin McCarthy from the House — and the Senate Democratic leader Chuck Schumer, who is Jewish.

It was one of those bipartisan, not to mention multi-faith, events that Washington is known for, coexisting with searing political division.

St. Matthew, patron saint of civil servants, was a tax-collector and, on the brighter side, an apostle who spread the gospel exhorting people to “Love your enemies, bless them that curse you, do good to them that hate you,” according to the church’s teachings.

There were at least stirrings of that Wednesday.