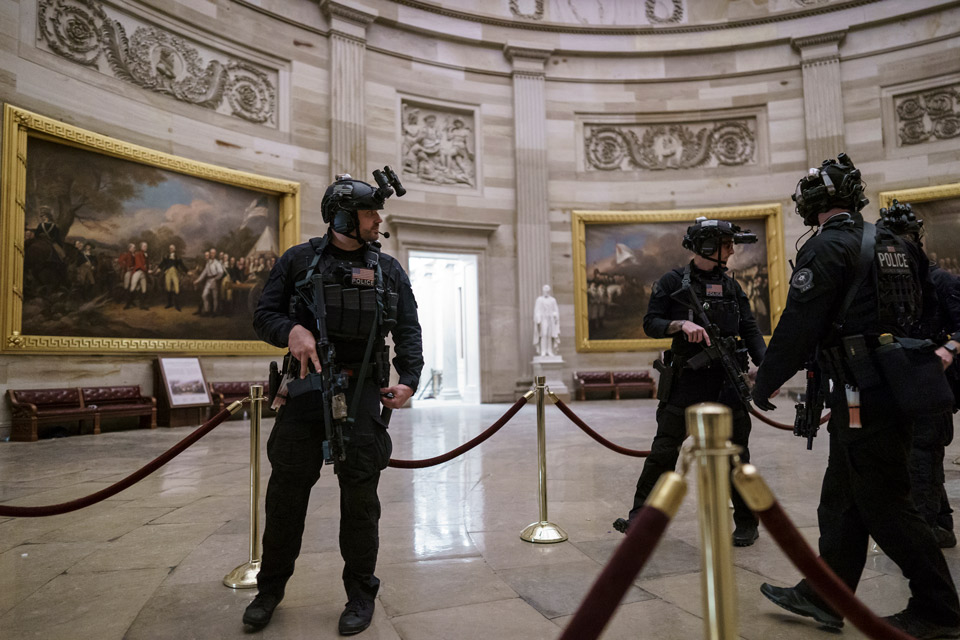 WASHINGTON (AP) — A police officer has died from injuries suffered as President Donald Trump's supporters stormed the Capitol, a violent siege that is forcing hard questions about the defeated president's remaining days in office and the ability of the Capitol Police to secure the area.

The U.S. Capitol Police said in a statement that Officer Brian D. Sicknick was injured “while physically engaging with protesters" during the Wednesday riot. He is the fifth person to die because of the Capitol protest and violence.

During struggling at the Capitol, Officer Brian D. Sicknick, 42, was hit in the head with a fire extinguisher, two law enforcement officials said. The officials could not discuss the ongoing investigation publicly and spoke to The Associated Press on condition of anonymity.

His family said in a statement Friday that Sicknick wanted to be a police officer his entire life. He served in the New Jersey Air National Guard before joining the Capitol Police in 2008.

“Many details regarding Wednesday’s events and the direct causes of Brian’s injuries remain unknown, and our family asks the public and the press to respect our wishes in not making Brian’s passing a political issue," the family said.

The rampage that has shocked the world and left the country on edge forced the resignations of three top Capitol security officials over the failure to stop the breach. It has led lawmakers to demand a review of operations and an FBI briefing over what they called a “terrorist attack.” And it is prompting a broader reckoning over Trump’s tenure in office and what comes next for a torn nation. 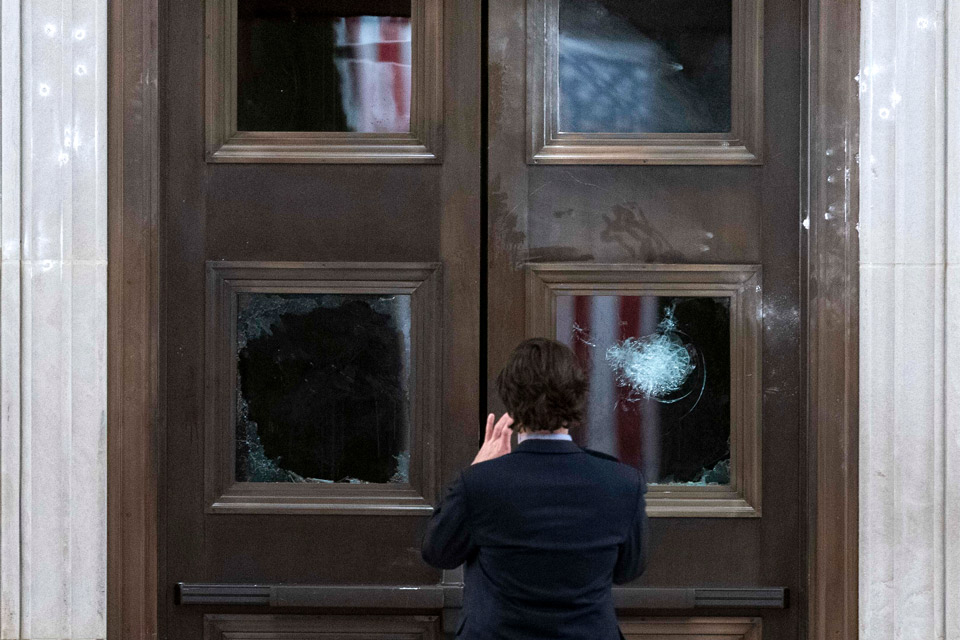 A man takes a photo of broken windows near the Rotunda in the early morning hours of Thursday, Jan. 7, 2021, after protesters stormed the Capitol in Washington, on Wednesday. (AP Photo/Andrew Harnik)Protesters were urged by Trump during a rally near the White House earlier Wednesday to head to Capitol Hill, where lawmakers were scheduled to confirm Biden’s presidential victory. The mob swiftly broke through police barriers, smashed windows and paraded through the halls, sending lawmakers into hiding.

One protester, a woman from California, was shot to death by Capitol Police, and there were dozens of arrests. Three other people died after “medical emergencies” related to the breach.

Despite Trump’s repeated claims of voter fraud, election officials and his own former attorney general have said there were no election problems on a scale that would change the outcome. All the states have certified their results as fair and accurate, by Republican and Democratic officials alike.

“None of this should have happened,” Sasse said in a statement. “Lord, have mercy.”

Sicknick had returned to his division office after the incident and collapsed, the statement said. He was taken to a local hospital where he died late Thursday. 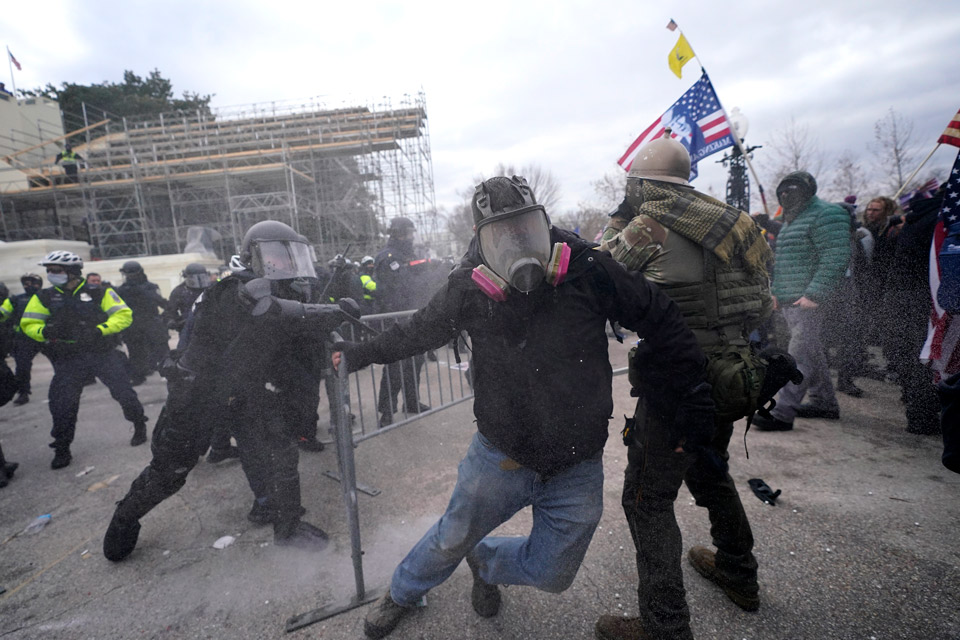 Police hold off Trump supporters who tried to break through a police barrier, Wednesday, Jan. 6, 2021, at the Capitol in Washington. As Congress prepares to affirm President-elect Joe Biden's victory, thousands of people have gathered to show their support for President Donald Trump and his claims of election fraud. (AP Photo/Julio Cortez)Two House Democrats on committees overseeing the Capitol police budgets said those responsible need to be held to answer for the “senseless” death.

"We must ensure that the mob who attacked the People’s House and those who instigated them are held fully accountable,” said Rep. Rosa DeLauro, D-Ct., and Rep. Tim Ryan, D-Ohio. in a statement.

Call to invoke the 25th Amendment

Earlier Thursday, House Speaker Nancy Pelosi said any remaining day with the president in power could be “a horror show for America.” Likewise, Senate Democratic leader Chuck Schumer said the attack on the Capitol was “an insurrection against the United States, incited by the president," and Trump must not stay in office “one day” longer.

Pelosi and Schumer called for invoking the 25th Amendment to the Constitution to force Trump from office before President-elect Joe Biden is inaugurated on Jan. 20. Schumer said he and Pelosi tried to call Vice President Mike Pence early Thursday to discuss that option but were unable to connect with him.

Pelosi said if the president’s Cabinet does not swiftly act, the House may proceed to impeach Trump.

Trump, who had repeatedly refused to concede the election, in a video late Thursday vowed for a “seamless transition of power.”

Two Republicans who led efforts to challenge the election results, Ted Cruz of Texas and Josh Hawley of Missouri, faced angry peers in the Senate. Cruz defended his objection to the election results as “the right thing to do” as he tried unsuccessfully to have Congress launch an investigation. In the House, Republican leaders Rep. Kevin McCarthy of California and Rep. Steve Scalise of Louisiana joined in the failed effort to overturn Biden’s win by objecting to the Electoral College results.

With tensions high, the Capitol shuttered and lawmakers not scheduled to return until the inauguration, an uneasy feeling of stalemate settled over a main seat of national power as Trump remained holed up at the White House.

The social media giant Facebook banned the president from its platform and Instagram for the duration of Trump's final days in office, if not indefinitely, citing his intent to stoke unrest. Twitter had silenced him the day before.

Facebook founder Mark Zuckerberg said “the shocking events" make it clear Trump “intends to use his remaining time in office to undermine the peaceful and lawful transition of power.”

Sund had defended his department’s response to the storming of the Capitol, saying officers had “acted valiantly when faced with thousands of individuals involved in violent riotous actions.”

Lawmakers from both parties pledged to investigate and questioned whether a lack of preparedness allowed a mob to occupy and vandalize the building. The Pentagon and Justice Department had been rebuffed when they offered assistance.

Newly elected Rep. Cori Bush, D-Mo., said if “we, as Black people did the same things that happened ... the reaction would have been different, we would have been laid out on the ground.”

The protesters ransacked the place, taking over the House area and Senate chamber and waving Trump, American and Confederate flags. Outside, they scaled the walls and balconies.

Rep. Val Demings, D-Fla., a former police chief, said it was “painfully obvious” that Capitol police “were not prepared.”