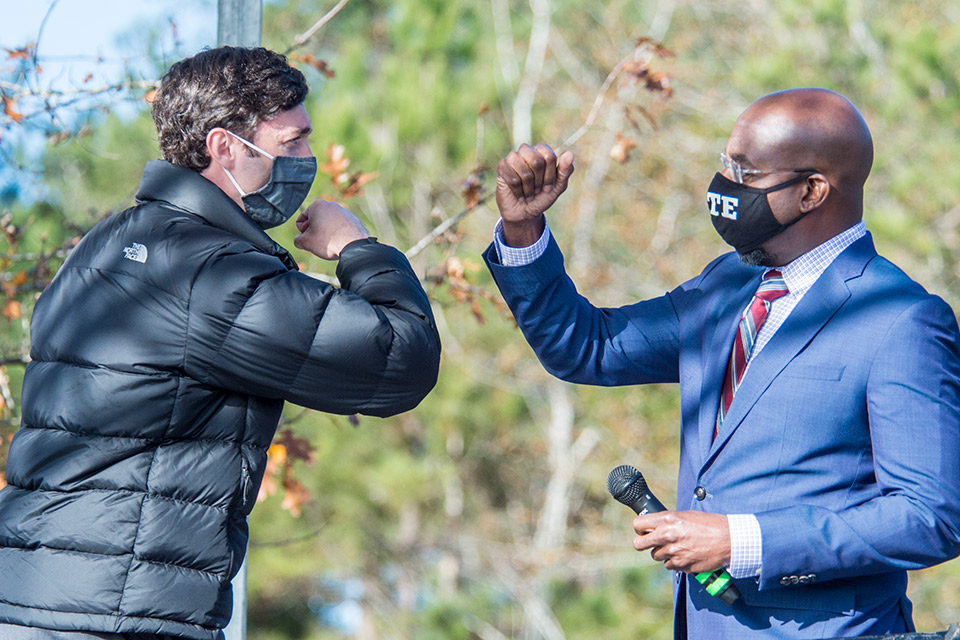 ATLANTA (AP) — Georgia voters are deciding the balance of power in Congress in a pair of high-stakes Senate runoff elections that will help determine President-elect Joe Biden's ability to enact what could be the most progressive governing agenda in generations. 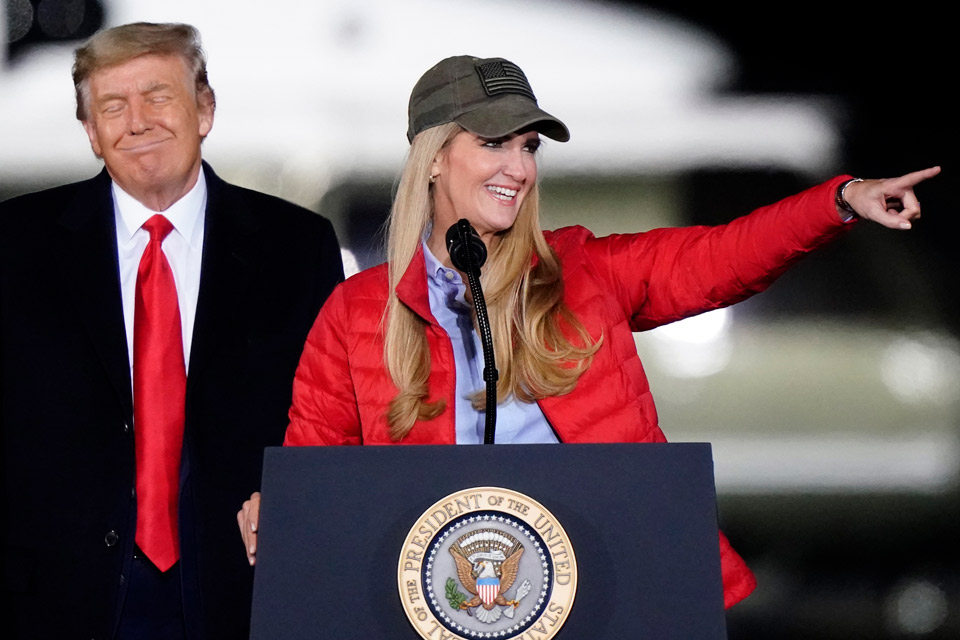 At a rally in northwest Georgia on the eve of Tuesday's runoffs, Trump repeatedly declared that the November elections were plagued by fraud that Republican officials, including his former attorney general and Georgia's elections chief, say did not occur. At the same time, Trump encouraged his supporters to show up in force for Georgia's Tuesday contests.

"You've got to swarm it tomorrow,” Trump told thousands of cheering supporters, downplaying the threat of fraud.

Democrats must win both of the state's Senate elections to gain the Senate majority. In that scenario, the Senate would be equally divided 50-50 with Vice President-elect Kamala Harris serving as the tie-breaker for Democrats.

The Democrats secured a narrow House majority and the White House during November's general election.

Georgia’s January elections, necessary because no Senate candidates received a majority of the general-election votes, have been unique for many reasons, not least because the contenders essentially ran as teams, even campaigning together sometimes.

One contest features Democrat Raphael Warnock, who serves as the senior pastor of the Atlanta church where slain civil rights leader Martin Luther King Jr. grew up and preached. The 51-year-old Warnock was raised in public housing and spent most of his adult life preaching in Baptist churches.

Warnock is facing Republican Sen. Kelly Loeffler, a 50-year-old former businesswoman who was appointed to the Senate less than a year ago by the state’s Republican governor. She is only the second woman to represent Georgia in the Senate, although race has emerged as a campaign focus far more than gender. Loeffler and her allies have seized on some snippets of Warnock’s sermons at the historic Black church to cast him as extreme. Dozens of religious and civil rights leaders have pushed back. 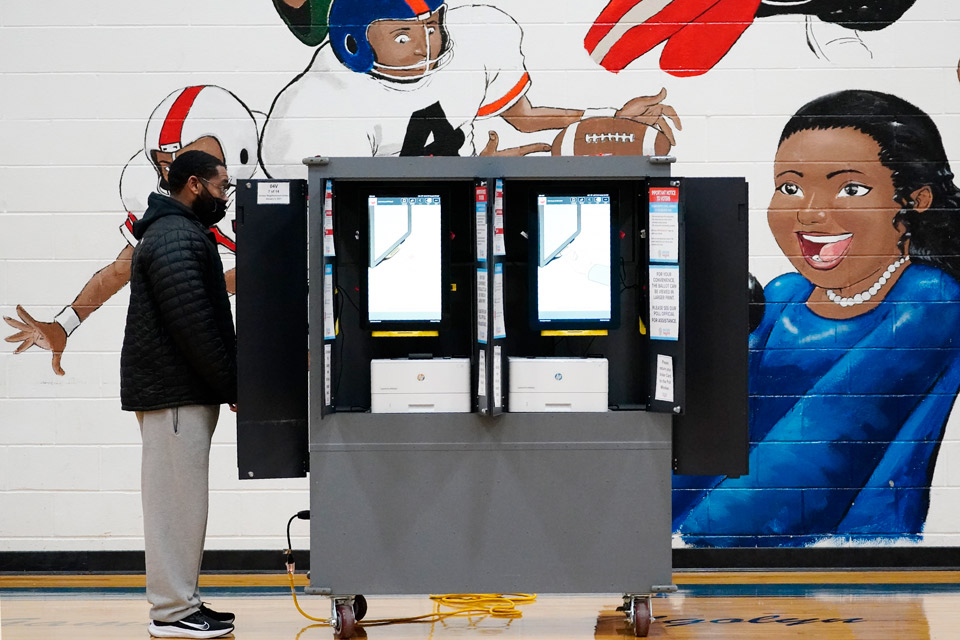 A person casts their vote during Georgia's Senate runoff elections on Tuesday, Jan. 5, 2021, in Atlanta. (AP Photo/Brynn Anderson)The other election pits 71-year-old former business executive David Perdue, who held the Senate seat until his term officially expired on Sunday, against Democrat Jon Ossoff, a former congressional aide and journalist. At just 33 years old, Ossoff would be the Senate’s youngest member if elected. He first rose to national prominence in 2017 when he launched an unsuccessful House special election bid.

Sucess of Biden's presidency in play

Even a closely divided Democratic Senate wouldn't guarantee Biden everything he wants, given chamber rules that require 60 votes to move most major legislation. But if Democrats lose even one of Tuesday's contests, Biden would have little shot for swift up-or-down votes on his most ambitious plans to expand government-backed health care coverage, strengthen the middle class, address racial inequality and combat climate change. A Republican-controlled Senate also would create a rougher path for Biden's Cabinet picks and judicial nominees.

“Georgia, the whole nation is looking to you.

"The power is literally in your hands,” Biden declared at his own rally in Atlanta on Monday. “One state can chart the course, not just for the next four years, but for the next generation.”

Despite fears among some Republicans that Trump's baseless claims of voter fraud could depress turnout, the two GOP candidates strongly support him. Perdue on Tuesday said that Trump would “of course" deserve credit if the Republicans won. 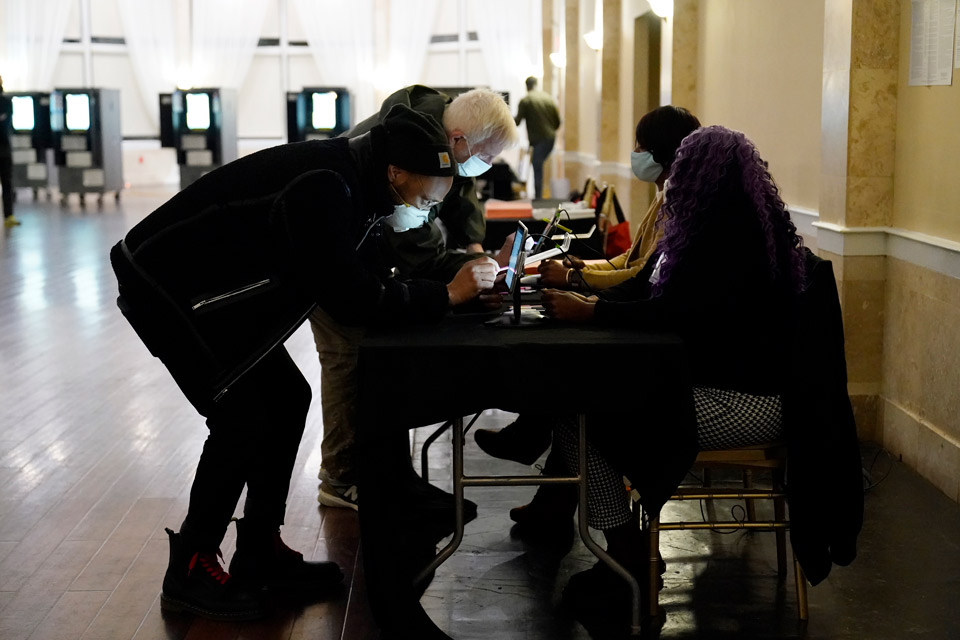 Voters register before casting their vote during Georgia's Senate runoff elections on Tuesday, Jan. 5, 2021, in Atlanta. (AP Photo/Brynn Anderson)“What the president said last night is, even if you are upset about all of that, you’ve got to stand up with us and fight," Perdue told “Fox & Friends.” "We’ll look back on this day if we don’t vote and really rue the day that we turned the keys to the kingdom over to the Democrats.”

Democrats have hammered Perdue and Loeffler, each among the Senate's wealthiest members, for conspicuously timed personal stock trades after members of Congress received information about the public health and economic threats of COVID-19 as Trump and Republicans downplayed the pandemic. None of the trades has been found to violate the law or Senate ethics, but Warnock and Ossoff have cast the Republicans as self-interested and out of touch.

Perdue and Loeffler have answered by lambasting the Democrats as certain to to usher in a leftward lunge in national policy. Neither Warnock nor Ossoff is a socialist, as Republicans allege. They do, however, support Biden's agenda.

This week's elections mark the formal finale to the turbulent 2020 election season more than two months after the rest of the nation finished voting. The stakes have drawn nearly $500 million in campaign spending to a once solidly Republican state that now finds itself as the nation’s premier battleground.

“It’s really about whether an agenda that moves the nation forward can be forged without significant compromise,” said Martin Luther King III, the son of the civil rights icon.

“There are a lot of things that are in the balance.”

The results also will help demonstrate whether the political coalition that fueled Biden's victory was an anti-Trump anomaly or part of a new landscape.

Biden won Georgia’s 16 electoral votes by about 12,000 votes out of 5 million cast in November.

Democratic success will likely depend on driving a huge turnout of African Americans, young voters, college-educated voters and women, all groups that helped Biden become the first Democratic presidential candidate since 1992 to win Georgia. Republicans, meanwhile, have been focused on energizing their own base of white men and voters beyond the core of metro Atlanta.

More than 3 million Georgians voted before Tuesday. Some precincts in metro Atlanta showed light-to-steady turnout Tuesday morning with no lines and voters taking just a few minutes to complete their ballots.

In downtown Atlanta, Henry Dave Chambliss, 67, voted for the two Republicans. He said he wants Republicans to keep Senate control to ensure the incoming Biden administration doesn’t slide “all the way to the left.”

“I’m moderately successful and I know they will come after more of my money which I’ve earned,” Chambliss said. “I was born a Southern Democrat, and I just hope and pray that some moderate voices are heard and things stay more in the middle of the road.”

Beverly McDaniel cast her ballot Tuesday morning amid light turnout at a neighborhood center’s gymnasium in Atlanta. She voted for both Democrats, saying she believes they would do better dealing with the hardships wrought by the coronavirus.

“Our kids are not fully, fully in school like they’re supposed to be and people don’t have jobs,” said McDaniel, a medical field worker. She said the virus “is taking over where we should have the government taking over instead.”