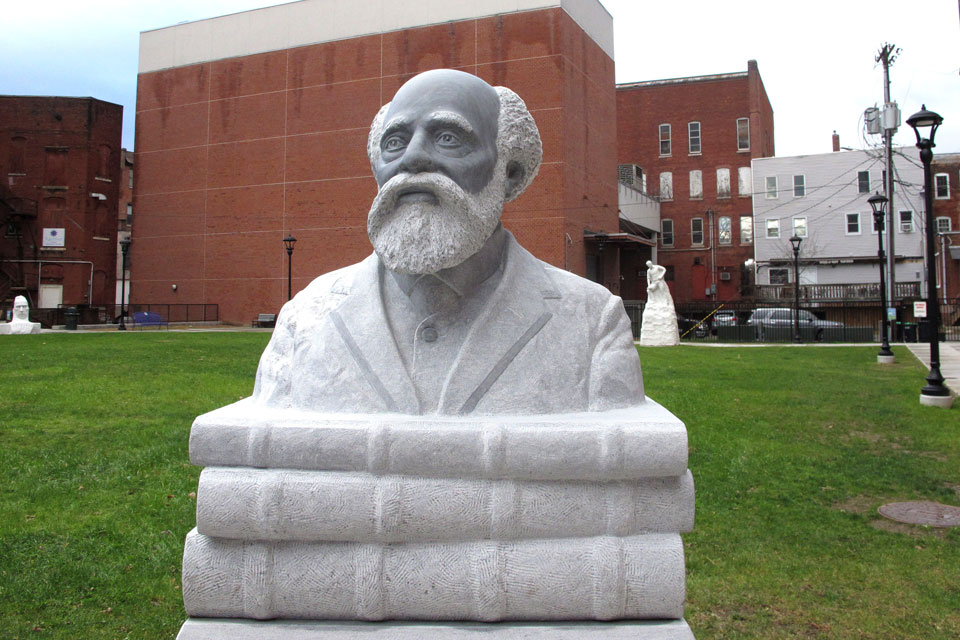 RUTLAND, Vt. (AP) — The first Black president of an American college is being honored with a sculpture installed in the Vermont city where he was born in 1826.

The larger-than-life marble bust of Martin Henry Freeman, a scholar, sits on a stack of books in a downtown square as part of the Rutland Sculpture Trail.

“It’s a very soft, gentle portrayal of Martin Freeman,” said Al Wakefield, one of the sponsors of the piece that was installed in November.

“I don’t know how many people remember either through historical writings what kind of person he was, but he’s depicted as a very gentle, kind, literary, artsy kind of a guy."

It's the eighth sculpture to be added to the city's sculpture trail aimed at celebrating local history and drawing more people to visit the working-class community. Among the pieces is a marble relief honoring the Vermont volunteers who served in the 54th Massachusetts Infantry Regiment, made up of African Americans soldiers, during the Civil War.

In 1856, Freeman became president of the all-Black Allegheny Institute and Mission Church in the Pittsburgh area, later named Avery College. He attended Middlebury College in Vermont, graduating at the top of his class in 1849. Freeman’s father fought in the American Revolution, one way for enslaved men to win their freedom.

The sculptures of Freeman and the Black Civil War soldiers were recently added to the Vermont African American Heritage Trail, a guide to various spots around the state that highlights the lives of African Americans in Vermont.

From the start, organizers of the sculpture trail wanted to be inclusive of all kinds of history, events and people, said Steve Costello, who came up with the idea for the trail.

“The country is full of sculptures planned without much consideration of the contributions of women or minorities, so we developed a broad list of ideas, which included Freeman from the get-go,” he said by email.

Vermont's struggles with issues of race

The very white and liberal state of Vermont has struggled with issues of race. Two years ago, the state’s only Black female lawmaker at the time resigned from the Legislature after receiving racists threats. At the end of this year, the head of the Rutland chapter of the NAACP is stepping down after she said she and her family had been targeted by racially motivated harassment. This fall, in the aftermath of the killing of George Floyd at the hands of Minneapolis police and the wounding of Jacob Blake in Kenosha, Wisconsin, protesters camped out for more than a month in a park across the street from the Burlington Police Department and held marches calling for the firing of three police officers. The officers are accused in lawsuits of using excessive force against two Black men in separate incidents in 2018.

The Freeman sculpture, designed by Mark Burnett, who is Black, and carved by Don Ramey, was installed at a time when some cities are reconsidering and even removing sculptures or monuments related to the Confederacy or to other historical figures, such as Columbus.

Just this week, Virginia removed a statue of Confederate Gen. Robert E. Lee that has represented the state in the U.S. Capitol for 111 years. A state commission has recommended replacing it with a statue of Barbara Johns, who protested conditions at her all-Black high school in 1951. Her court case became part of the landmark Brown v. Board of Education decision by the U.S. Supreme Court striking down racial segregation in public schools.

Wakefield, a Black man who moved to Vermont from New York City 30 years ago and whose family helped sponsor the sculpture of Freeman, said it was “really, really relevant,” in the context of the nationwide protests for racial justice and the reassessment of public statues.

The only Black student

Freeman went on to teach mathematics and natural philosophy at Allegheny Institute and Mission Church in the Pittsburgh area, where he became president in 1856. He supported the colonization of Liberia for Black Americans and abruptly resigned in 1863 with a plan to teach at Liberia College.

He went to Liberia, as he often said, to be a man, which he felt he could not be in the United States, Hart said. It was an act of self-determination, he said. But unlike Freeman, many of the Black Americans who went to Liberia were biracial, the sons and daughters of former enslavers, Hart said. Being dark-skinned, Freeman felt discrimination there, too.

He taught at Liberia College and subsequently also became its president. He died in Monrovia in 1889.

“I think that what is important for Vermonters to know is that there has always been a place for persons of African descent in the state of Vermont,” said Curtiss Reed, executive director of the Vermont Partnership for Fairness & Diversity. He would like to see more public works of art like the sculpture of Freeman.

“There are those who would say that we can deny the existence of folks of color as well as their contributions, whether as pastors, or as legislators, or as business people, as abolitionists, as veterans," he said. “There's a lot of education to be done.”