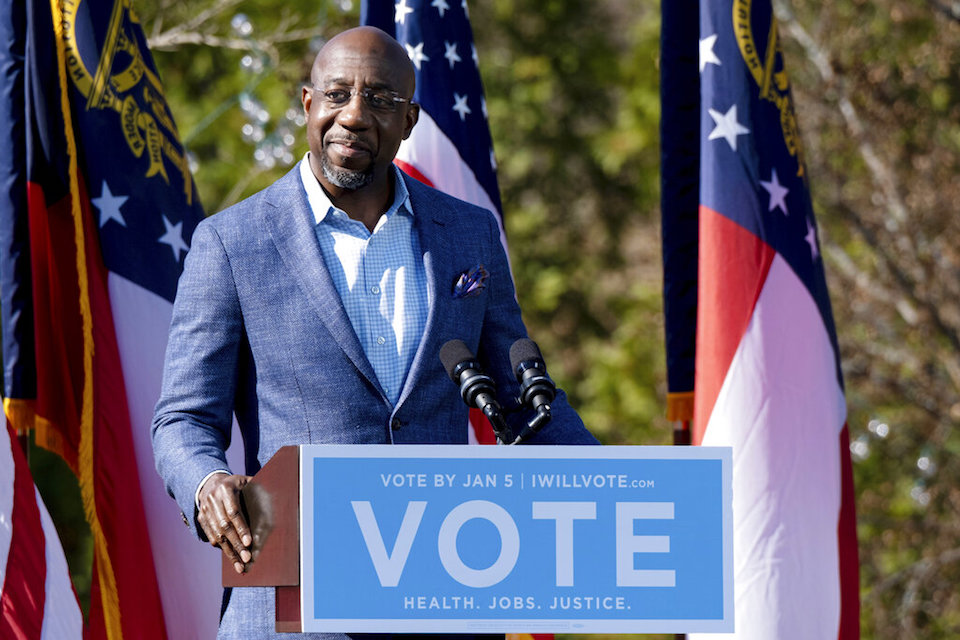 ATLANTA (AP) — When Georgia Republican Kelly Loeffler and Democrat Raphael Warnock advanced to the Jan. 5 U.S. Senate runoff, they faced the immediate challenge of winning over the 2 million voters who chose one of the 18 other candidates in November's election.

Polls show they have largely succeeded, and that could give Loeffler, the incumbent, a small advantage.

Republican U.S. Rep. Doug Collins came in third in the November vote that ended with the Republican candidates winning 48,000 more votes than the Democratic candidates.

In Georgia's second runoff election, Republican U.S. Sen David Perdue started with an even wider lead, having won 88,000 more votes in November than Democrat Jon Ossoff. Since he didn't get a majority, however, Perdue was forced into a run off.

Turnout could be the deciding factor.

Through Wednesday, nearly 2.1 million voters had cast ballots, roughly on pace with the Nov. 3 general election. It’s unclear how the Christmas holiday will affect the pace of balloting. In-person early voting runs as late as Dec. 31 in some counties.

One thing helping line voters up is the decision of the candidates in both races to run as tickets, with joint appearances and advertisements. J. Miles Coleman of the University of Virginia Center for Politics said the joint effort has helped Warnock wrap up Democratic voters.

“He and Ossoff have done a better job of running as a ticket," Coleman said.

"I think overall that’s going to benefit Warnock and help him consolidate some of his support.”

With the candidates running as tickets, it's unlikely the parties will split the seats.

Result will determine control of Senate

Two wins would put Democrats in control of the U.S. Senate with Vice President-elect Kamala Harris breaking a 50-50 tie.

A split or two GOP wins would keep Republicans in control.

Deborah Jackson, a former mayor of the Atlanta suburb of Lithonia, came in fourth in November, the runner-up Democrat behind Warnock. She benefitted from being a Black woman, a known quantity in the Democratic stronghold of DeKalb County and the first Democrat listed on a ballot so long that Warnock had to remind supporters to go all the way down to find his name.

“I had tangible and practical experience," Jackson said. "I think some people were interested in that.”

She said some people were offended that leading state and national Democrats tried to clear the field for Warnock, but said she's still supporting him without reservation.

“The Democrats need to be in control of the Senate, or at least there needs to be a balance," Jackson said.

“I think he'll get all her votes,” Durojaiye said, saying she thinks Warnock is someone who will learn in the Senate and back her priorities of addressing climate change and societal inequity.

Shane Hazel, the Libertarian who won the key sliver of votes that forced Perdue and Ossoff into a runoff, said his voters may sit the runoff out, telling Hazel “they will never vote for anybody out of fear again.”

One of the top early voting counties in the state is Rabun — in Georgia's northeastern corner — where President Donald Trump and Perdue both won 78% of the vote.

“I’m convinced the Democrats could run Mother Teresa and get 20%,” said Ed Henderson, secretary of the Rabun County Republican Party.

As in the other counties in his northeast Georgia congressional district, Collins was the top vote-getter in the Senate special election.

“This was Collins country," Henderson said.

Collins, though, has been a strong supporter of Loeffler and Perdue.

Fears on both sides that voters will stay home

Although nearly 40% of Rabun's registered voters have already cast ballots, Henderson said he worries that Trump’s ceaseless attacks on the integrity of Georgia’s presidential election will hurt Republican turnout there, citing the "godlike reverence" residents have for the president.

“My biggest problem this election cycle is there is a distrust of the system," Henderson said, saying a handful of hardcore Republicans have told him they are sitting the election out, saying they believe Trump was cheated, despite little credible evidence of wrongdoing.

Henderson also frets that Loeffler has never been to his county, so far from Atlanta that many watch out-of-state television.

“It would be greatly helpful if they would come up here in person and tell our voters they would like to get our vote,” Henderson said of the Republican candidates.

Democrats have their own trouble. Early voting is lagging in Georgia's smaller urban areas including Savannah, Augusta, Macon and Columbus, and Democratic vote totals have been disappointing in rural areas.