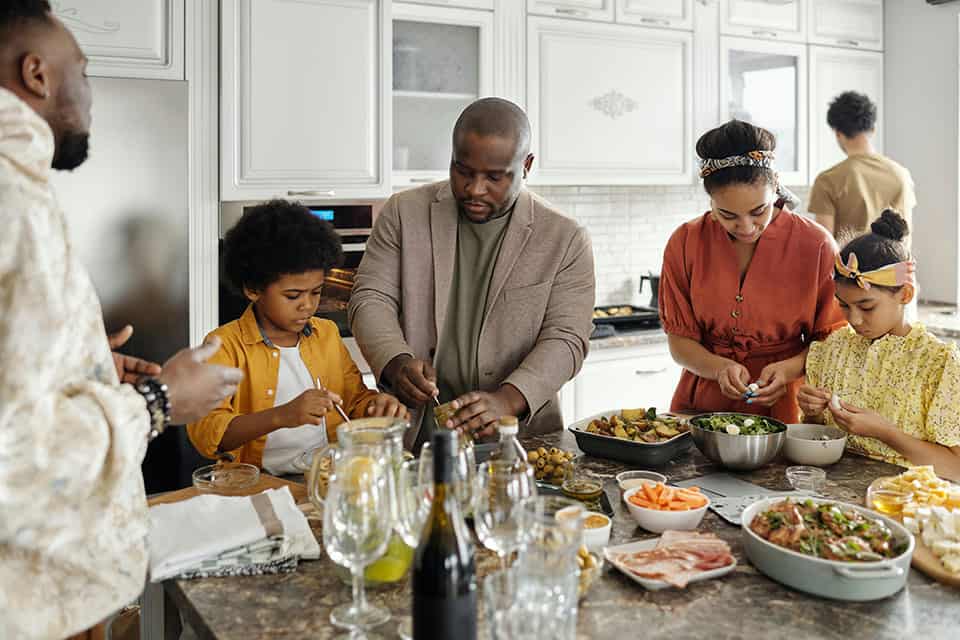 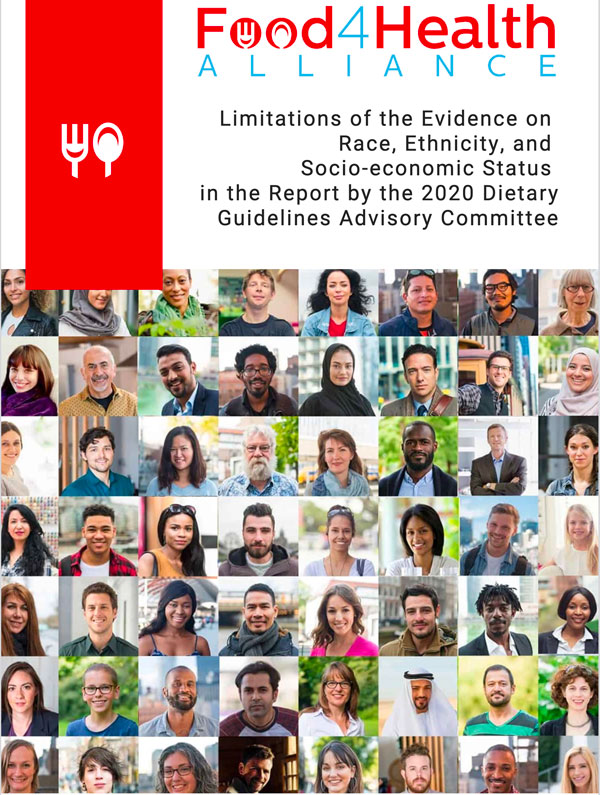 Click image for full reportWashington, D.C. – The Food 4 Health (F4H) Alliance sent a letter to the Congressional Black Caucus (CBC) highlighting a recent F4H report that found more than 90% of the systematic reviews in the Scientific Report by the 2020 Dietary Guidelines Advisory Committee did not account for race, ethnicity, and/or socio-economic status. The report also found the Committee relied predominantly on white populations that are questionably generalized to the broader U.S. population.

In light of these findings, the letter urges the CBC to impress upon Congress and the agencies-- the U.S. Departments of Agriculture and Health and Human Services (USDA-HHS)-in charge of the Dietary Guidelines for Americans (DGA) the importance of ensuring that the Guidelines serve all Americans.

The letter states: “According to a recent report by the Food4Health Alliance, more than 90% of the scientific reviews conducted for the 2020 DGA did not account for race, ethnicity, and/or socio-economic status. The disturbing implication is that the 2020-2025 Dietary Guidelines for Americans may not be appropriate for historically disadvantaged populations” said Simona James, spokesperson for the Food 4 Health Alliance.

“The Dietary Guidelines have far-reaching influence over our country’s eating habits, but do not actually account for most of our population.

"This policy cannot afford to exclude those who struggle with chronic diseases—the majority of our nation— including the most vulnerable among us,” added James.

Providing nutritional advice for those with obesity, diabetes, and other chronic diseases should be reflected in federal nutrition guidance. However, the DGA is focused exclusively on disease prevention for healthy Americans. The DGA does not advise on treatment; it, therefore, excludes the more than 60% of Americans who have been diagnosed with at least one diet-related chronic disease.

According to the latest government data, 42.8% of American adults now have obesity, and these rates 24% higher among Hispanics and African Americans. The rate of diabetes also continues to be significantly higher among racial minority groups. Native Americans (American Indians and Alaska Natives) have a greater chance of having diabetes than any other US racial group, and Pacific Islanders are 2.5 times more likely to get diagnosed with diabetes than white populations.

“Research shows that a lifetime of malnourishment to crucial micronutrients and an imbalance of macronutrient intake predisposes us to nutrition-related and inflammatory diseases. These diseases are not only at epidemic levels in Tribal communities, they are expensive and unnecessary. A more preventative approach to informing feeding programs will ensure a better quality of health for Native people and all Americans,” said Valerie Segrest, BSN, MA, Regional Director, Native Food & Knowledge Systems, Native American Agriculture Fund.

“As minority Americans become the new majority by 2050, our nutrition policies and practices such as the DGA should reflect the growing demographic to eliminate health disparities. For instance, the 5-year federal research plan has yet to invest in African heritage foods as it has with other cultural diets.

The COVID-19 pandemic brings greater urgency to addressing these chronic diseases such as obesity, heart disease, depression, and diabetes, which have clearly been linked to an increased risk to COVID-19 complications including hospitalization, intubation, and death. Higher rates of these chronic diseases among disadvantaged and communities of color are likely a factor in explaining the greater rates of COVID-19 seen in these groups.

Rigorous scientific studies have shown that the healthful food choices as well as greater access to those foods in low-income neighborhoods, among other social determinants of health, can start to reverse hypertension and type 2 diabetes within a matter of just weeks.

“Greater investment should be made in researching and understanding individual eating habits so that our nutritional guidelines can move from a "one-size fits all" approach to one that is inclusive of all Americans. There is a lack of cultural representation in the Guidelines - and to not include studies that consider race/ethnicity limits their applicability and relevance to underserved communities. One’s culture plays a role in food choices, and these attitudes/beliefs should be reflected in the research methodology when creating recommendations,” said Lisa K. Fitzpatrick MD, MPH, MPA, Founder and CEO of Grapevine Health.