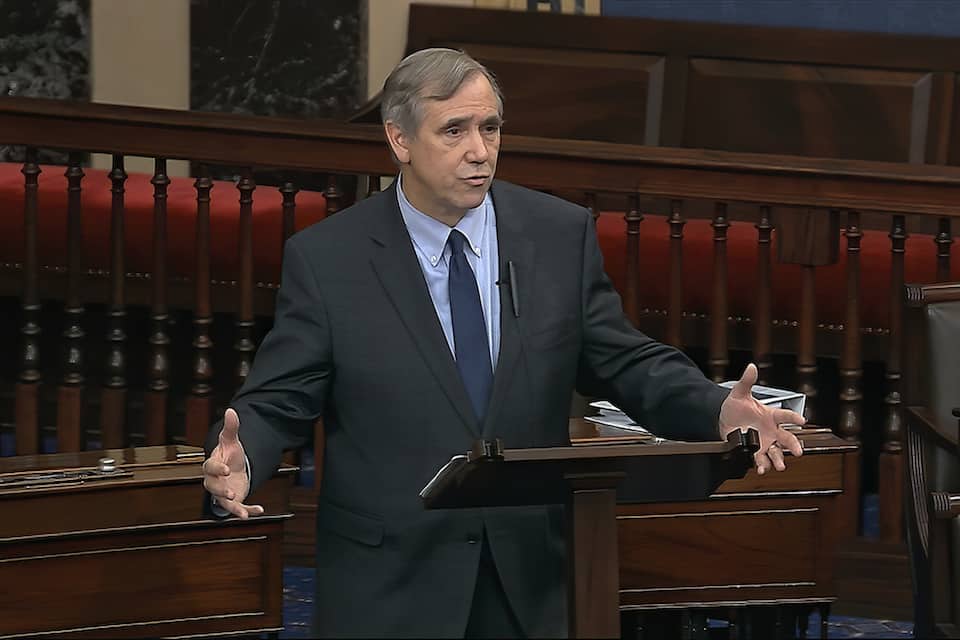 WASHINGTON (AP) — It was about more than providing virus aid.

Day after day, night after night, the dozen or so senators met over pizza and Zoom calls, hammering out a framework for a $900 billion-plus COVID-19 virus aid and economic relief package. Their goal was not only to break a stubborn impasse on the pandemic aid, but to show that the old ways of doing business in Washington — in good faith, across party lines, with give-and-take — could still succeed.

Their work interjected fresh momentum toward a year-end deal. The White House jumped in with a new proposal. Congressional leaders showed interest. The gridlock seemed to be breaking.

But problems quickly flared. Details proved vexing. And by week’s end, the lawmakers involved in the bipartisan talks were admitting that the thorniest problem of all — whether companies, schools and others should be protected from virus-related lawsuits — was something they simply couldn’t solve, at least not yet.

For President-elect Joe Biden, it’s a clear indication that there are willing partners in Congress for the kind of consensus building he campaigned on. Yet it’s also a cautionary tale just weeks before his inauguration, showing how difficult it will be to govern from the center at a time when members of Congress, and the country at large, find it hard to bridge the gulf between them.

It also showed just how broken Congress, particularly the Senate, has become.

“Everyone's frustrated,” said Sen. Jeff Merkley, D-Ore., in an interview. “There are senators on both sides that are very frustrated that essentially the Senate has stopped functioning.”

Biden has a track record of cutting deals in Congress, both as a former senator and as vice president to Barack Obama, and the new White House will be closely watched for its expected overtures to the moderates.

Democrats like Sen. Joe Manchin, D-W.Va., who is known to buck his party, and newly liberated Republicans freed of Trump and eager to deliver for constituents back home will have great sway in the new year.

Because the House and Senate will both have slimmer majorities, that creates opportunities for individual lawmakers to gain power by crossing party lines to tip the vote tally. It also means Biden’s administration will likely be forced to rely on Republicans in the House, if the majority Democrats splinter, and in the Senate, regardless of party control after the Jan. 5 runoff elections in Georgia.

The current COVID “gang” leaders, GOP Sen. Susan Collins of Maine and Democratic Sen. Mark Warner of Virginia, all but extended an invitation to the Biden administration.

“We felt the stakes were simply too high to allow partisan warfare to prevent us from delivering relief,” the two senators wrote in an op-ed announcing the bipartisan framework. “The process, too, can serve as a template for progress on other difficult but vital issues in our closely divided Senate.”

Yet, as the last week’s negotiations unfolded, it became clear that party leaders still drive the decision making, the final signatories to any deal.

Senate Majority Leader Mitch McConnell signaled it was “unlikely” any compromise on the liability issue would be acceptable to Republicans, who hold the majority in the Senate.

Aligning with conservative Republicans, McConnell scoffed at “bailouts” for the states — even though some GOP senators would welcome the infusion of cash to pay police, firefighters, public health workers and others back home.

Senate Democratic leader Chuck Schumer, backed by progressives, rejected the liability shield as unfair to workers who would have little recourse to sue their employers over working conditions during COVID.

“It’s an unconscionable position — no relief for the American people unless corporations receive blanket immunity from lawsuits,” Schumer said.

Washington cleared out for the weekend, hopes dimmed for a sweeping deal before Christmas.

Gangs often emerge in Congress, particularly the Senate, when there’s a vacuum of leadership and lawmakers have pent-up energy to break through the standoffs and find a resolution.

During moments of crisis, the gangs usually succeed in focusing attention, building suspense as lawmakers huddle secretly, to develop that most elusive of Washington achievements, a bipartisan compromise.

But they don’t always deliver solutions.

In 2005, the Gang of 14 bipartisan senators engineered an end to a standoff over Democratic efforts to block then-President George W. Bush’s judicial nominees when all sides agreed to lower the temperature.

But the agreement fell apart by 2013 as tensions boiled over with the Republican blockade of Barack Obama’s nominees. Fed up, the Senate majority leader at the time, Democrat Harry Reid, invoked the so-called “nuclear option” — a rules change that reduced the threshold for confirming many judicial and executive branch nominations to a 51-vote majority.

McConnell went further in 2017, deploying the “nuclear option” to allow Trump’s Supreme Court picks to be confirmed the same way — what many of today’s senators view as a breaking point for the Senate.

A record of failures

Congressional gangs were robust in 2013 as lawmakers tried to strike compromises with Obama.

The bipartisan Gang of Eight senators delivered a sweeping immigration overhaul, a hard-fought compromise that passed by a wide margin in the Senate — only to land with a thud in the House. It never became law.

Collins and other women led a gang that helped Congress ease out of the 2013 federal shutdown. And Collins helmed another gang during the 2018 shutdown that famously employed a “talking stick” so participants could take turns sharing ideas to end the standoff.

Former Senate aide Ryan Nickel sees gangs as the currency of the new Congress, as centrist Democrats and Republicans assert their desire to deliver achievements during in the Biden era.

“2021 can be the year of the talking stick caucus,” said Nickel, now a Democratic strategist.

Others though, see the gangs as a symptom of a greater problem.

Rather than vigorously debate legislation on the Senate floor, leaders shield senators from taking tough votes — or votes on bills that would actually have wide bipartisan support.

It’s become a procedural arms race, each side deploying the rules of the chamber to block action, resulting in the stalemates.

Merkley is working with senators to envision a functioning Senate: What if the senators took votes on the COVID bill? On amendments to provide money to the states? On the liability protection for businesses and organizations? More unemployment benefits, money for hospitals and vaccines?

“At least in voting, our citizens would know where we stood,” he said. “We wouldn’t need a gang right now. We would have had a gang of 100.”