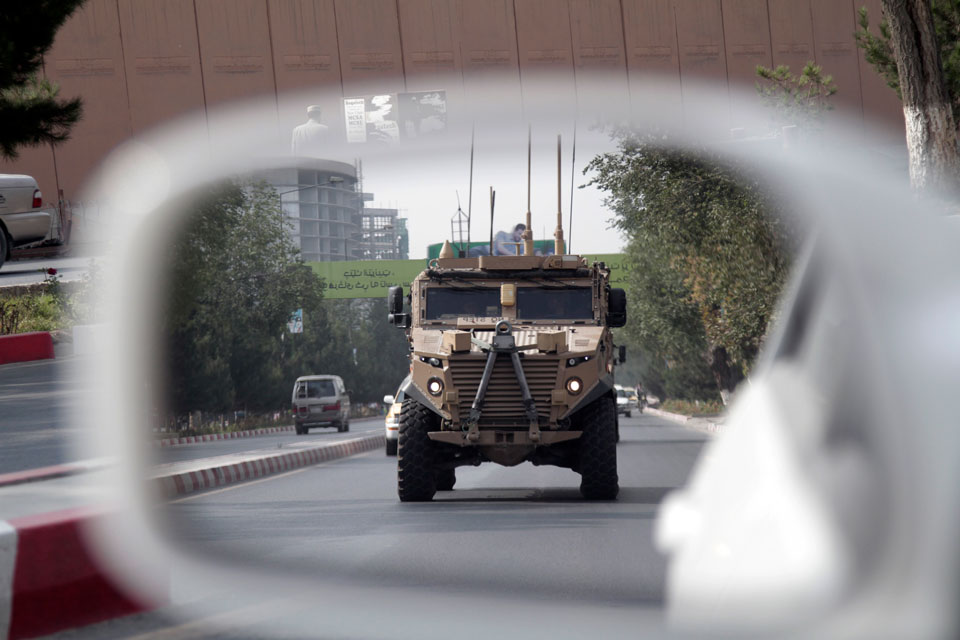 ISLAMABAD (AP) — An accelerated U.S. troop withdrawal from Afghanistan, announced by Washington this week, has rattled both allies and adversaries. There are fears of worsening violence and regional chaos, which some say could embolden the local Islamic State affiliate to regroup and perhaps even try to build another “caliphate.”

Under an earlier deal between the U.S. and the Taliban that outlined a gradual pullout, the remaining U.S. forces were to leave Afghanistan by April. The Pentagon now says some 2,500 troops will leave by January, just days before President-elect Joe Biden’s inauguration, leaving another 2,000 or so U.S. forces in place. Biden has said he prefers a small, intelligence-driven, counterterrorism presence in Afghanistan.

A U.S. withdrawal would be welcome in most of rural Afghanistan where civilians are increasingly caught in the crossfire between Taliban and government forces, said Torek Farhadi, a former Afghan government adviser and political analyst.

“After a bombing by any side of the conflict, no one has gone back to rebuild any infrastructure.

"No one has really worked on healing hearts and minds,” he said.

The U.S.-Taliban deal, signed in February, was largely propelled by Washington’s fear of an expanding Islamic State affiliate in Afghanistan, said a U.S. Defense Department official who spoke on condition of anonymity because of the sensitivity of the subject.

With terrorist plots that he said had links to Afghanistan, Washington sought a deal with the Taliban that would bring them into a coordinated fight — along with Afghan security forces — against the Islamic State militant group, which lost its self-proclaimed “caliphate” in Syria and Iraq.

A U.S.-led coalition toppled the Taliban in Afghanistan for harboring former al-Qaida leader Osama bin Laden following the Sept. 11, 2001, attacks. The Taliban has regained strength in recent years in the country, although the Islamic State and a degraded al-Qaida still carry out attacks in the region.

“Washington has looked at Afghanistan largely through a counterterrorism lens. And that will certainly be the case for the incoming Biden administration,” said Michael Kugelman, deputy director of the Asia Program at the Washington-based Wilson Center.

NATO has fewer than 12,000 troops helping to train and advise Afghan national security forces. The 30-nation alliance relies heavily on the U.S. armed forces for transport, logistics and other support. 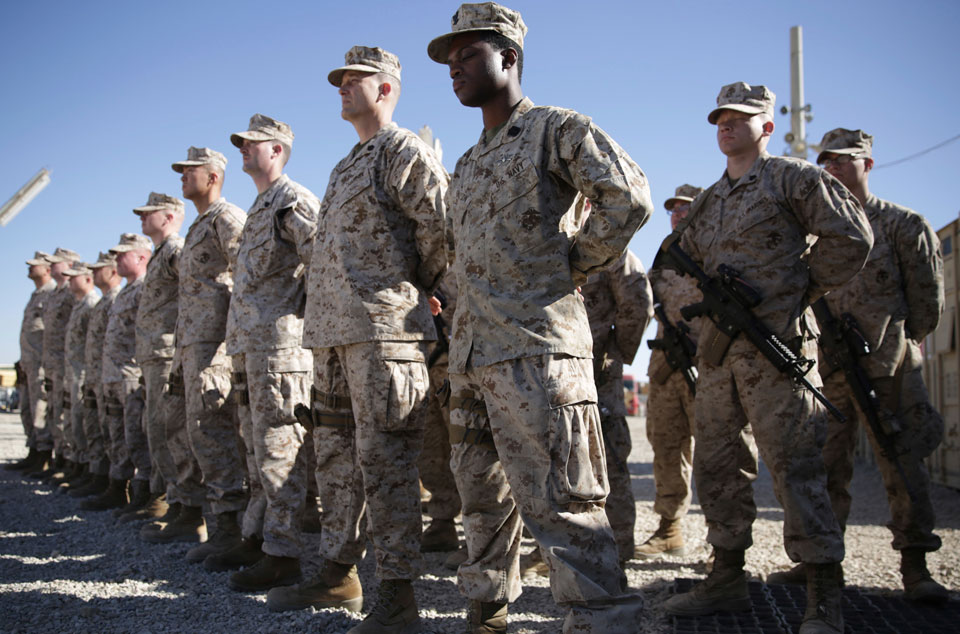 In this Jan. 15, 2018, file photo, U.S. Marines watch during the change of command ceremony at Task Force Southwest military field in Shorab military camp of Helmand province, Afghanistan. An accelerated U.S. troop withdrawal from Afghanistan, announced by Washington, Tuesday, Nov. 17, 2020, has rattled both allies and adversaries and raised fears of worsening violence and regional chaos, which some say could embolden the Islamic State affiliate in the country to try to regroup in a lawless Afghanistan. (AP Photo/Massoud Hossaini, File)Kugelman said President Donald Trump's approach to ending America’s longest war was always a gamble.

“While the idea of the Taliban making peace with the Afghan government and then working together to target ISIS sounds great in theory, it’s a very tall order, and especially anytime soon.”

A Biden administration strategy of maintaining a residual force — even a narrowly focused one — would require a renegotiated deal with the Taliban, which the insurgent movement has already rejected. The Afghan government, which has complained bitterly about being sidelined in U.S. negotiations with the Taliban, wants the deal scrapped entirely.

With word this week of the accelerated U.S. troop withdrawal, Afghans also fear powerful warlords in Kabul with a long history of infighting could again turn their guns on each other once the current deterrence of an international troop presence is sharply reduced.

“One of the most critical roles of the U.S. in Afghanistan ... is to keep their own Afghan allies from fighting among themselves and bringing down the state,” said Anatol Lieven, a New America Foundation Senior Fellow at Georgetown University's Qatar campus. “It seems unlikely, however, that the U.S. will be willing or able to do this indefinitely.”

Analysts fear the accelerated withdrawal could significantly compromise the defense capabilities of Afghanistan’s forces. Kugelman says even a small number of U.S. forces can have an impact on the direction of the war.

“The numbers (of troops being pulled out) may seem small, and they are, but the impacts of even small numbers of troops are considerable,” he said. “U.S. airpower has helped Afghan ground forces repel Taliban offensives.

Yet Afghanistan's acting Defense Minister Asadullah Khalid told Parliament on Tuesday that the security forces were holding their own and only 4% of their operations need U.S. air assistance.

“There might be up and down in numbers of troops, but we are not concerned. We are ready to defend Afghanistan independently,” Khalid told lawmakers.

U.S. 'wearing out its welcome'

Afghanistan remains desperately poor, even after 20 years and billions of dollars in investment. More than 25 million of its 36 million people survive on barely $1.40 a day. For many, the presence of international forces brings little relief.

"There’s certainly good reason to believe that the U.S is wearing out its welcome in Afghanistan, given its inability to rein in rising insurgent and terrorist violence and given its own contribution to the violence through actions that maim and kill civilians,” Kugelman said. “And that’s aside from perceptions of U.S. complicity in Kabul’s corruption.”

Afghanistan’s government is among the world’s 10 most corrupt, according to Transparency International. Since 2002, Washington’s own watchdog says the U.S. has lost $19 billion of aid to Afghanistan to waste, abuse and fraud.

The U.S. spends $4 billion a year on Afghanistan’s National Security and Defense Forces, yet relentless violence in the country has been demoralizing and U.S. airpower has been the key to the ability of Afghan forces to hold territory against Taliban onslaughts.

Afghanistan’s security forces also have been degraded by corruption. According to an August report by the Special Inspector General for Afghanistan Reconstruction, about half of all police in the Taliban strongholds of the southern provinces use drugs and up to 70% of police positions in those regions are “ghost” jobs — in which they are not actually filled but the salaries are diverted to officials on the take.

The U.S. troop withdrawal seems certain to feature prominently in the first visit to Afghanistan on Thursday of Pakistan’s Prime Minister Imran Khan. The neighbors have an uneasy relationship, with Kabul accusing Islamabad of strengthening the Taliban by harboring its leadership. Pakistan says Afghanistan has become the staging arena for Indian-sponsored attacks on its soil.

Pakistan has been critical in getting the Taliban to the table, and Khan has warned against a messy retreat by U.S. troops, fearing that the chaos in Afghanistan will spill into Pakistan, which still houses nearly 2 million Afghan refugees from four decades of war.

But Kabul worries about Pakistan might use proxy Taliban fighters to retaliate if Islamabad feels threatened by India-sponsored attacks from Afghan territory.

“In the end, the future of Afghanistan depends on the Afghans themselves and Afghanistan’s neighbors. The USA is not going to be in this region forever," Lieven said.

“As for most other Afghans, it seems that they are just desperately anxious for an end to the war," he added.