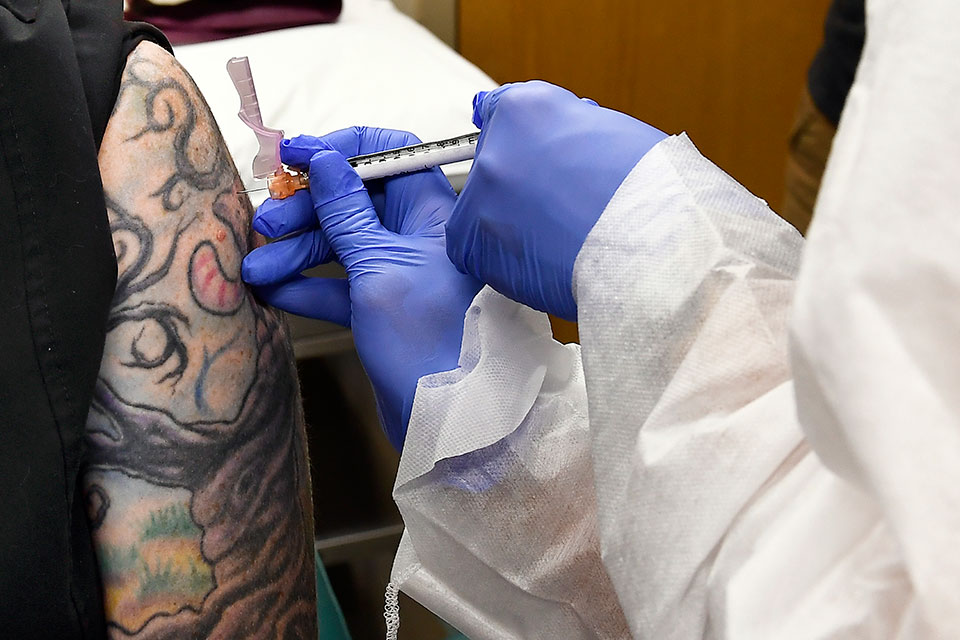 A second experimental COVID-19 vaccine — this one from Moderna Inc. — yielded extraordinarily strong early results Monday, another badly needed dose of hope as the pandemic enters a terrible new phase.

Moderna said its vaccine appears to be 94.5% effective, according to preliminary data from an ongoing study. A week ago, competitor Pfizer Inc. announced its own vaccine looked 90% effective — news that puts both companies on track to seek permission within weeks for emergency use in the U.S.

“The vaccines that we're talking about, and vaccines to come, are really the light at the end of the tunnel.”

A vaccine can’t come fast enough, as virus cases topped 11 million in the U.S. over the weekend — 1 million of them recorded in just the past week — and governors and mayors are ratcheting up restrictions ahead of Thanksgiving. The outbreak has killed more than 1.3 million people worldwide, over 246,000 of them in the U.S.

Stocks rallied on Wall Street and elsewhere around the world on rising hopes that the global economy could start returning to normal in the coming months. Moderna was up 7.5% in the morning, while companies that have benefited from the stay-at-home economy were down, including Zoom, Peloton and Netflix.

Both vaccines require two shots, given several weeks apart. U.S. officials said they hope to have about 20 million Moderna doses and another 20 million of the vaccine made by Pfizer and its German partner BioNTech to use in late December. 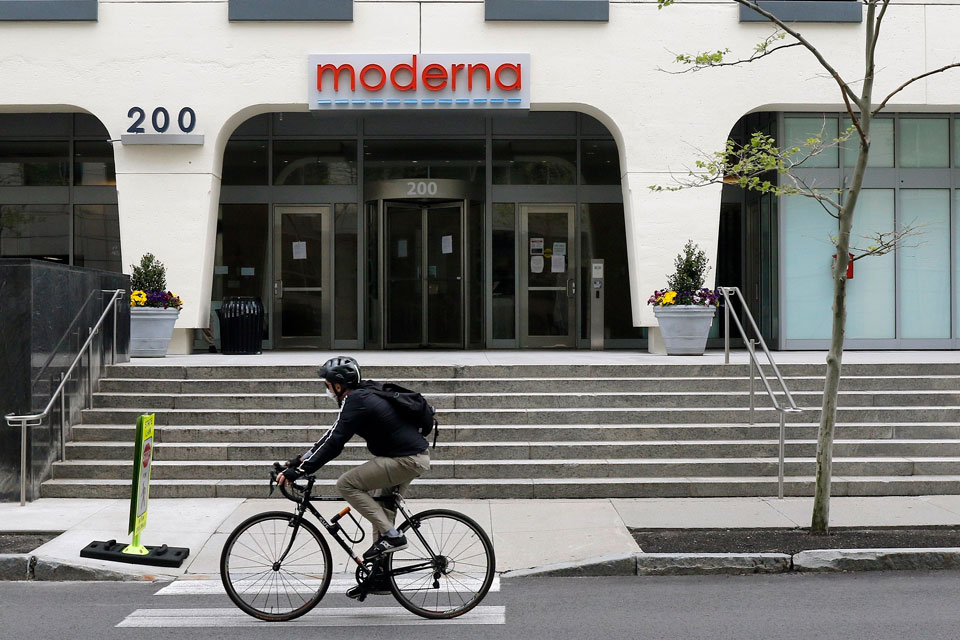 In this May 18, 2020, file photo, a bicyclists pedals past an entrance to a Moderna, Inc., building in Cambridge, Mass. Moderna said Monday, Nov. 16, 2020, its COVID-19 vaccine is proving to be highly effective in a major trial. (AP Photo/Bill Sikes, File)Dr. Stephen Hoge, Moderna’s president, welcomed the “really important milestone” but said having similar results from two different companies is what’s most reassuring.

“That should give us all hope that actually a vaccine is going to be able to stop this pandemic and hopefully get us back to our lives,” Hoge told The Associated Press. He added: “It won’t be Moderna alone that solves this problem. It’s going to require many vaccines” to meet the global demand.

If the Food and Drug Administration allows emergency use of Moderna’s or Pfizer’s candidate, there will be limited, rationed supplies before the end of the year.

Exactly who is first in line has yet to be decided. But Health and Human Services Secretary Alex Azar said the hope is that enough doses are available by the end of January to vaccinate adults over 65, who are at the highest risk from the coronavirus, and health care workers. Fauci said it may take until spring or summer before anyone who is not high risk and wants a shot can get one.

The National Institutes of Health helped create the vaccine Moderna is manufacturing, and NIH's director, Dr. Francis Collins, said the exciting news from two companies “gives us a lot of confidence that we're on the path towards having effective vaccines.”

But “we're also at this really dark time,” he warned, saying people can't let down their guard during the months it will take for doses of any vaccines cleared by the FDA to start reaching a large share of the population. 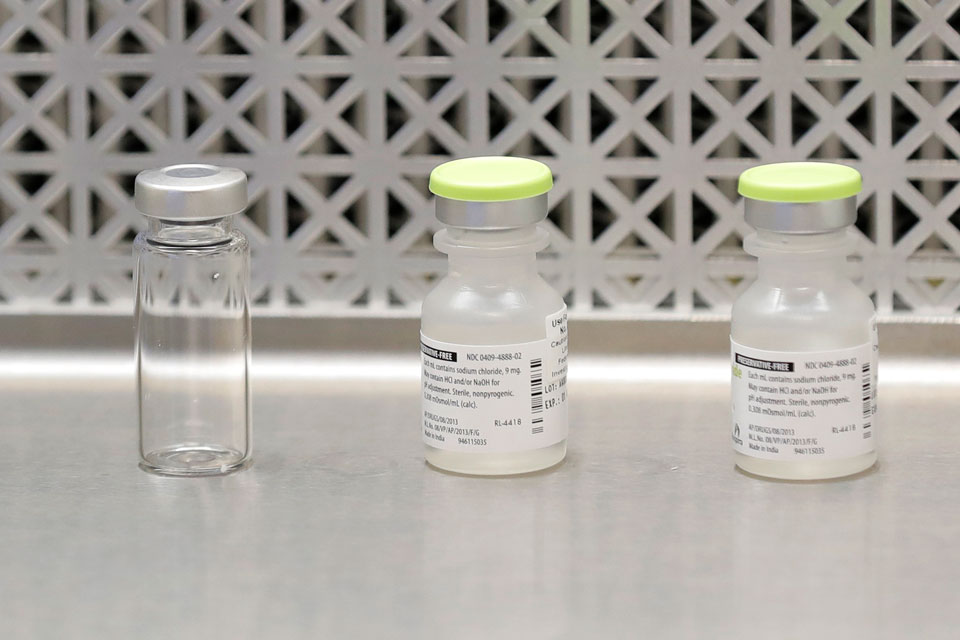 This March 16, 2020, file photo shows vials used by pharmacists to prepare syringes used on the first day of a first-stage safety study of the potential vaccine for COVID-19 at the Kaiser Permanente Washington Health Research Institute in Seattle. Moderna said Monday, Nov. 16, its COVID-19 vaccine is proving to be highly effective in a major trial. (AP Photo/Ted S. Warren, File)Moderna’s vaccine is being studied in 30,000 volunteers who received either the real thing or a dummy shot. On Sunday, an independent monitoring board examined 95 infections that were recorded after volunteers’ second shot. Only five of the illnesses were in people given the vaccine.

Earlier this year, Fauci said he would be happy with a COVID-19 vaccine that was 60% effective.

The study is continuing, and Moderna acknowledged the protection rate might change as more COVID-19 infections are detected. Also, it’s too soon to know how long protection lasts. Both cautions apply to Pfizer’s vaccine as well.

But Moderna’s independent monitors reported some additional, promising tidbits: All 11 severe COVID-19 cases were among placebo recipients, and there were no significant safety concerns. The main side effects were fatigue, muscle aches and injection-site pain after the second dose.

Scientists not involved with the testing were encouraged but cautioned that the FDA still must scrutinize the safety data and decide whether to allow vaccinations outside of a research study.

“We’re not to the finish line yet,” said Dr. James Cutrell, an infectious-disease expert at UT Southwestern Medical Center in Dallas. “If there’s an impression or perception that there’s just a rubber stamp, or due diligence wasn’t done to look at the data, that could weaken public confidence.”

States already are gearing up for what is expected to be the biggest vaccination campaign in U.S. history. First the shots have to arrive where they’re needed, and Pfizer’s must be kept at ultra-cold temperatures — around minus 94 degrees Fahrenheit. Moderna’s vaccine also starts off frozen, but the company said Monday it can be thawed and kept in a regular refrigerator for 30 days, easing that concern.

Beyond the U.S., other governments and the World Health Organization, which aims to buy doses for poor countries, will have to separately decide if and when vaccines should be rolled out broadly.

“There are many, many questions still remaining,” including how long protection lasts and if the first vaccines to emerge work as well in older people as in the young, said WHO chief scientist Dr. Soumya Swaminathan.

“We also hope the clinical trials will continue to collect data, because it’s really going to be important for us to know in the long term.”

The vaccine from Cambridge, Massachusetts-based Moderna is among 11 candidates in late-stage testing around the world, four of them in huge studies in the United States. Collins stressed that more U.S. volunteers are needed for those studies.

Elsewhere around the world, China and Russia have been offering different experimental vaccines to people before completing final-stage testing.

Both Moderna's shots and the Pfizer-BioNTech candidate are so-called mRNA vaccines, a brand-new technology. They aren’t made with the coronavirus itself, meaning there’s no chance anyone could catch it from the shots. Instead, the vaccine contains a piece of genetic code that trains the immune system to recognize the spiked protein on the surface of the virus.

Pfizer CEO Albert Bourla tweeted that he was thrilled at Moderna’s news, saying, “Our companies share a common goal — defeating this dreaded disease.”