Biden Promotes Unity and Turns to Business of Transition 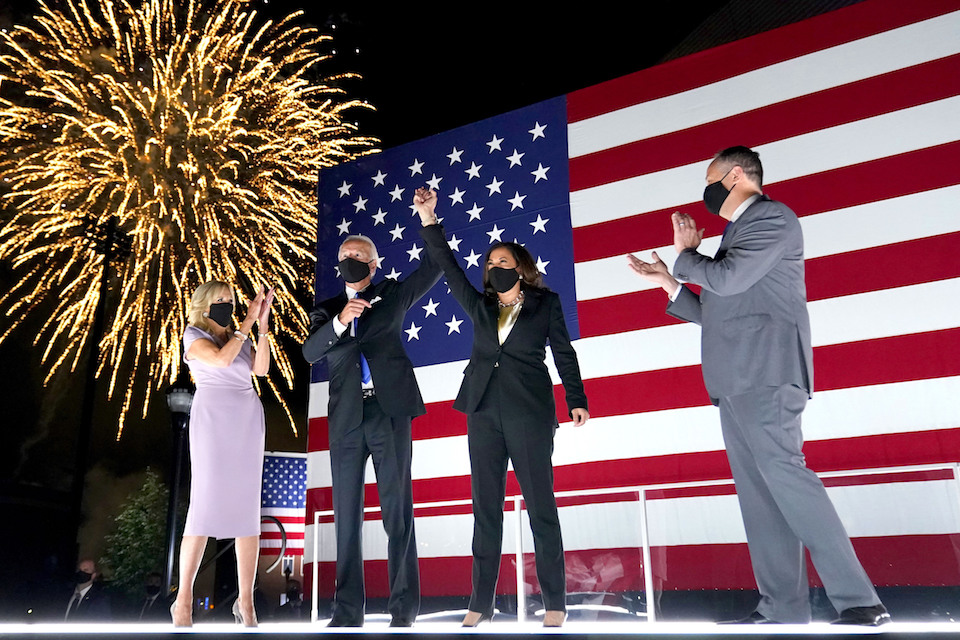 WILMINGTON, Del. (AP) — Joe Biden used his first national address as president-elect to vow to heal a deeply divided nation, declaring it was time to “let this grim era of demonization in America begin to end” and reaching out to the millions of people who voted against him to say, “Let's give each other a chance.”

His calls for reconciliation at a Saturday evening victory celebration came even as President Donald Trump continued to argue that the election had been stolen from him, an indication that the divisive politics that have gripped the U.S. over the past four years are far from over.

It also suggested that even as Biden seeks to build out a government during his transition to the presidency, the president has little interest in helping him do so.

“For all those of you who voted for President Trump, I understand the disappointment,” Biden said during a drive-in event in Wilmington, Delaware. "It’s time to put away the harsh rhetoric, lower the temperature, see each other again.”

Biden heads into his first full day as president-elect on Sunday with key staffing decisions to make as the coronavirus rages. The always-frenzied 10-week transition period before Inauguration Day on Jan. 20 already has been shortened by the extra time it took to determine the winner of Tuesday's election.

The second Catholic to be elected president, Biden planned to attend church at St. Joseph on the Brandywine near his home in Wilmington, as he does nearly every week. He began Election Day with a visit to the church and the grave of his son, Beau, a former Delaware attorney general who died of brain cancer in 2015.

His top priority in the transition is expected to be quickly naming a chief of staff. Biden suggested during the campaign that his first call after being elected would be to Dr. Anthony Fauci, the nation's top infectious disease expert, but his advisers have not said whether the two have spoken yet.

Biden said Saturday that he would announce a task force of scientists and experts Monday to develop a “blueprint” to begin beating back the virus by the time he assumes the presidency. He said his plan would be “built on bedrock science” and “constructed out of compassion, empathy and concern.”

This coming week, Biden will launch his agency review teams — the group of transition staffers that have access to key agencies in the current administration to smooth the transfer of power.

The teams will collect and review information such as budgetary and staffing decisions, pending regulations and other work in progress from current staff at the departments to help Biden’s team prepare to transition.

Biden was on track to win the national popular vote by more than 4 million, a margin that could grow as ballots continue to be counted.

He made Trump the first incumbent president to be denied a second term since Republican George H.W. Bush lost to Bill Clinton in 1992.

His running mate, Sen. Kamala Harris, used her first address as vice president-elect to showcase her history-making place as the first Black woman to become vice president, an achievement that comes as the U.S. faces a reckoning on racial justice.

The California senator is also the first person of South Asian descent elected to the vice presidency and the highest-ranking woman ever to serve in government.

“While I may be the first woman in this office, I will not be the last,” Harris said in her speech Saturday night.

Centrists and progressives joined up to win

To win, Biden successfully unified different wings of the Democratic Party around their universal loathing of Trump, garnering support from progressive insurgents and establishment moderates alike.

“The party came together to defeat Donald Trump,” said Brian Lemek, a longtime progressive fundraiser and executive director of Brady PAC, which invested $6 million on 2020 candidates supporting gun violence prevention efforts and voting rights. “His main job right now, we all think, is to heal the nation.”

Biden senior adviser Ted Kaufman said the transition team will focus on the "nuts and bolts” of building the new administration in coming days. He said Biden plans to speak to legislative leaders and governors from both parties.

Biden may not make top Cabinet choices for weeks. But he built his presidential run around bipartisanship and he has spent the days since Tuesday's election pledging to be a president for all Americans. That suggests he could be willing to appoint some Republicans to high-profile administration positions.

DFA CEO @ysimpsonpower responds to former Sen. Heitkamp on @ThisWeekABC: "[Progressives] are not saying leave people out, we're saying bring people in. But if parts of our party, even when we bring home the bacon like we did yesterday, call us 'radical'..." that's a big problem. pic.twitter.com/i9BWEIz8rS

Many former Republican officeholders broke with Trump to endorse Biden’s campaign. His selection of some of them to join the new government could appease Senate Republicans, who may have to confirm many of Biden's choices for top jobs.

The GOP could retain control of the chamber after two special elections in Georgia on Jan. 5.

Still, too much across-the-aisle cooperation could draw the ire of progressives.

Some already worry that uncooperative Senate Republicans could force Biden to scale back his ambitious campaign promises to expand access to health care and lead a post-pandemic economic recovery that relies on federal investment in green technology and jobs to help combat climate change.

“I think there will be a huge misuse of the word ‘unity’ to imply that we need to water down the ideas that Joe Biden just campaigned on,” said Adam Green, co-founder of the Progressive Change Campaign Committee.

He said the country was more united around bold solutions to big problems than small-scale efforts.

The election of Joe Biden and Kamala Harris to the White House has sparked celebration in downtown Portland.

Biden's efforts at bipartisan reconciliation, meanwhile, could still be derailed by Trump's refusing to concede the presidential race.

It wasn’t clear if Biden and Trump would meet in coming days, as is the modern tradition.

Symone Sanders, a Biden campaign spokeswoman, said “Donald Trump does not get to decide the winner of elections.”

“The people decide, voters in the country decide,” Sanders said. “And voters have made their choice very clear.”

Romney to Trump: 'dial it back'

Trump started his Sunday morning by retweeting support from a prominent legal expert calling for review of the balloting.

Sen. Mitt Romney, R-Utah, said Trump had a right to pursue recounts and legal challenges. But he noted that those efforts will unlikely change the outcome and he urged the president to dial back his rhetoric.

“I think one has to be careful in the choice of words.

I think when you say the election was corrupt or stolen or rigged that that's unfortunately rhetoric that gets picked up by authoritarians around the world. And I think it also discourages confidence in our democratic process here at home," Romney told NBC's “Meet the Press.”