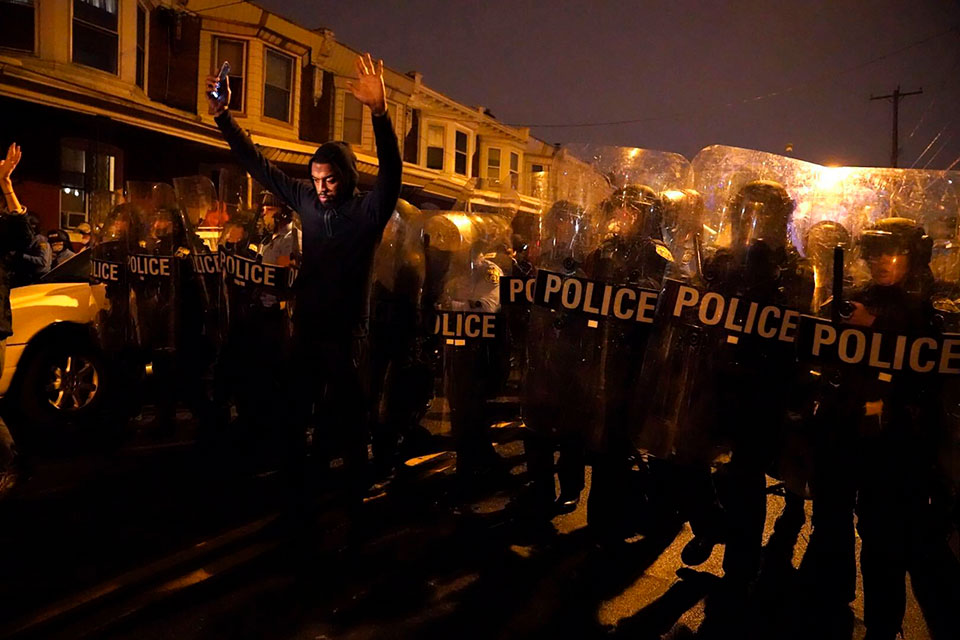 PHILADELPHIA (AP) — More than a dozen people were arrested and more than 30 officers injured in protests stemming from the police shooting death of a Black man they say refused their orders to drop a knife in a confrontation captured on video, Philadelphia police said Tuesday. 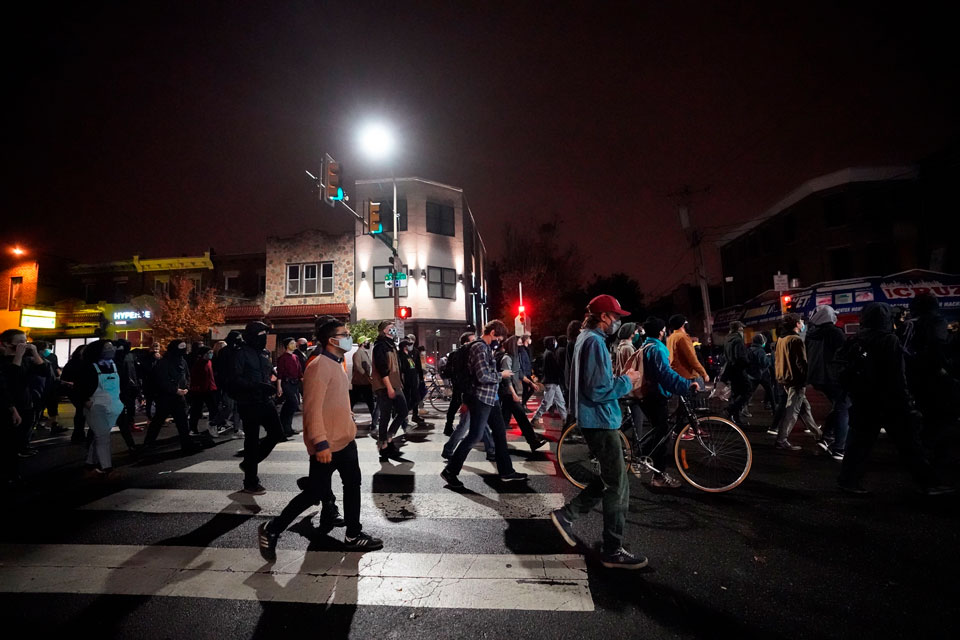 People gather in protest in response to the police shooting of Walter Wallace Jr., Monday, Oct. 26, 2020, in Philadelphia. Police officers fatally shot the 27-year-old Black man during a confrontation Monday afternoon in West Philadelphia which quickly raised tensions in the neighborhood. (Jessica Griffin/The Philadelphia Inquirer via AP) The man, identified by city officials as Walter Wallace, 27, was shot before 4 p.m. Monday in an episode filmed by a bystander and posted on social media. Bystanders and neighbors complained that police fired excessive shots.

Wallace’s father, Walter Wallace Sr., told The Philadelphia Inquirer that his son appeared to have been shot 10 times. He said his son was also a father, was on medication and struggled with his mental health.

“Why didn’t they use a Taser?” he asked.

Officers had been called to the predominantly Black Cobbs Creek neighborhood in west Philadelphia on reports of a man with a weapon, said Officer Tanya Little, a police spokesperson.

Officers said they found Wallace holding a knife and ordered him to drop the weapon several times. Wallace advanced toward the officers, who fired several times, Little said.

In the video, a woman and at least one man follow Wallace, trying to get him to listen to officers, as he briskly walks across the street and between cars. The woman, identified by family members as Wallace's mother, screams and throws something at an officer after her son is shot and falls to the ground.

The video does not make it clear whether he was in fact holding a knife, but witnesses said he was.

Wallace was hit in the shoulder and chest, Little said, but she would not say how many times he was shot or the number of times officers fired. One of the officers drove him to a hospital, where he was pronounced dead a short time later, she said. 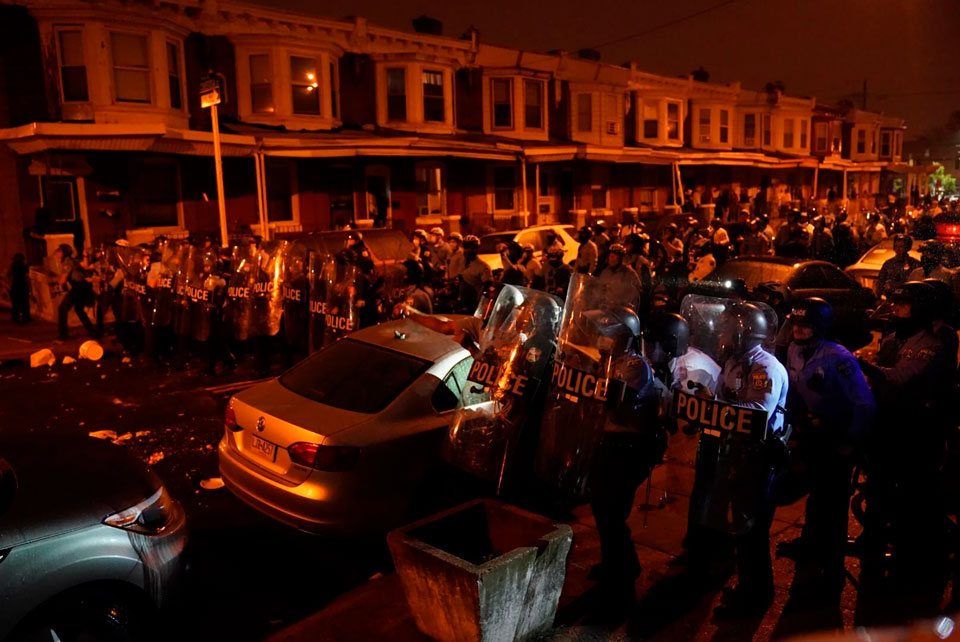 Police officers move in formation during a protest in response to the police shooting of Walter Wallace Jr., Monday, Oct. 26, 2020, in Philadelphia. Police officers fatally shot the 27-year-old Black man during a confrontation Monday afternoon in West Philadelphia that quickly raised tensions in the neighborhood. (Jessica Griffin/The Philadelphia Inquirer via AP)No officers or bystanders were injured in the initial confrontation, Little said. The names of the officers who fired the shots, and their races, were not immediately disclosed. Both were wearing body cameras and were taken off street duty during the investigation.

Neighbors and witnesses soon gathered Monday night on the block of Locust Street where the shooting occurred, yelling that police didn't have to shoot Wallace and didn't have to fire so many shots.

Police Commissioner Danielle Outlaw went to the scene Monday and spoke to neighbors, and both Mayor Jim Kenney, a Democrat, and Outlaw said they would hold a meeting soon to talk with the community about the shooting and other concerns. 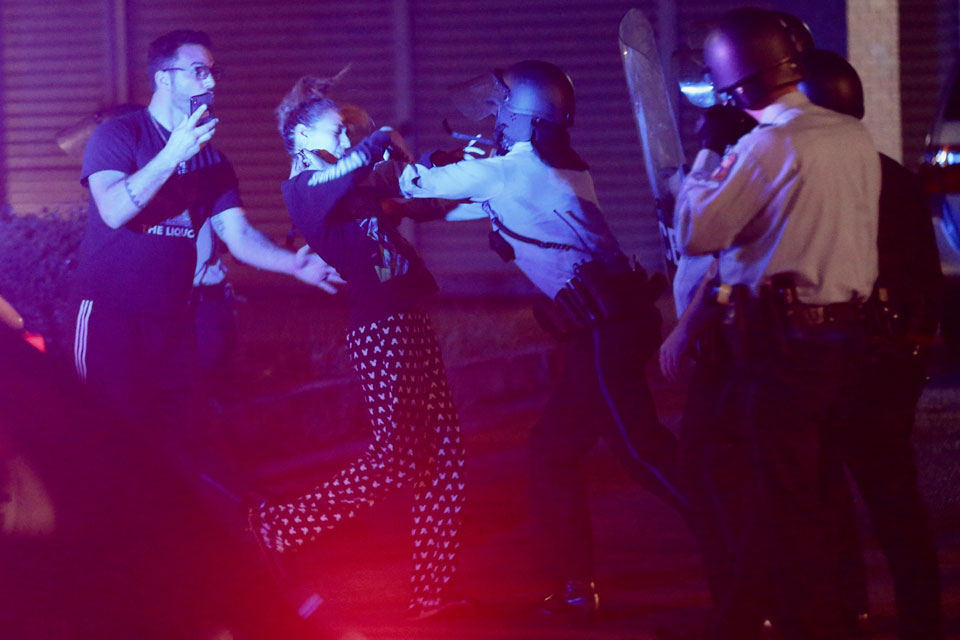 Police shove back a woman who was arguing with them just off 52nd Street in West Philadelphia in the early hours of Tuesday, Oct. 27, 2020. Protesters gathered after police shot and killed a Black man in West Philadelphia on Monday. (Tim Tai/The Philadelphia Inquirer via AP)“I heard and felt the anger of the community,” Outlaw said in a statement, adding that the video “raises many questions” and that “those questions will be fully addressed by the investigation.”

Hundreds of people later took to the streets in west Philadelphia into the wee hours of Tuesday, with interactions between protesters and police turning violent at times, the Inquirer reported. Video showed many yelling at officers and crying.

Dozens of protesters gathered at a nearby park and chanted “Black lives matter.”

Police cars and dumpsters were set on fire as police struggled to contain the crowds. More than a dozen officers, many with batons in hand, formed a line as they ran down 52nd Street. The crowd largely dispersed then.

Thirty officers were injured, most of them from thrown objects such as bricks and rocks, according to police. One officer had a broken leg and other injuries after she was struck by a pickup truck, police said. The other injured officers were treated and released.

The 52nd Street corridor was also the site of protests against police brutality at the end of May, after George Floyd was killed by Minneapolis police. Those protests have been the subject of City Council hearings, with protesters describing harsh and unnecessary tactics, including tear gas and projectiles fired by police.