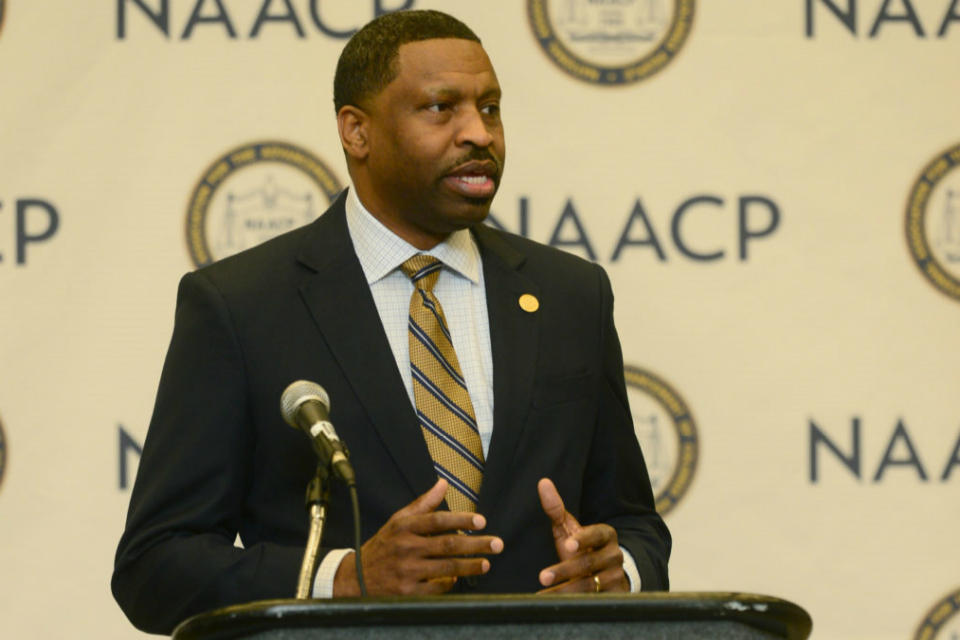 BALTIMORE (October 9, 2020)—Derrick Johnson, the president and CEO of the NAACP, has spoken out to oppose the nomination of Amy Coney Barrett to serve as Associate Justice on the Supreme Court of the United States. The NAACP has also made a formal statement to the Senate Judiciary Committee opposing Barrett's nomination.

“Today, the NAACP submitted a letter to the Senate Judiciary Committee strongly opposing the nomination of Amy Coney Barrett to the Supreme Court," Johnson said.

"Coming in the middle of a presidential election in which over seven million people have already voted, the Barrett nomination is as illegitimate as it is corrupt. Instead of forcing a nomination onto our highest court, the Senate should address the harms of the global pandemic raging across the country and disproportionately affecting the lives and livelihoods of African Americans.

"Under the “advice and consent” clause of the Constitution, the Senate must rigorously and meticulously scrutinize a Supreme Court nomination. Weeks and even months are necessary to fulfill this solemn duty. The Senate’s timetable here is designed to fail.

"Fast-tracking this nomination—even as individual Senators have contracted coronavirus—will deprive the American people of the public, exacting review that should be afforded to a lifetime appointment to the Court.

"The next president should decide who sits on the Court.

"We have reviewed Amy Coney Barrett’s record on civil rights, including her writings as a law professor and her three years as an appellate court judge.

"On issue after issue, we have found her to be stunningly hostile to civil rights. Her aggressive view of when past decisions should be overruled, combined with her reactionary positions on what rights the Constitution protects, will jeopardize our hard-fought wins in the Court. Her scholarship questions even foundational principles such as whether the Fourteenth Amendment was properly adopted and whether Brown v. Board of Education remains viable authority.

"Her repeated endorsement of discrimination in the workplace—including the stunning conclusions that separate can be equal when it comes to race and that the use of racial epithets does not necessarily create a hostile work environment—mark a clear willingness to jettison longstanding civil rights precedents.

"Sometimes it is difficult to discern the consequences of a confirmation from a nominee’s past writings and rulings, but not with Judge Barrett. And the stakes could not be higher.

"The rights of African Americans to fully participate in democracy and in every facet of social and economic life, on an equal basis, lie in the balance.

"We will fight this illegitimate Trump nomination with everything we have because of the danger it poses to our civil rights and to the future of our democracy. At the same time, we emphatically encourage all Americans to vote.

"As the Supreme Court battle demonstrates, the consequences of this election could be not greater. Our voices must be heard.”

Founded in 1909 in response to the ongoing violence against Black people around the country, the NAACP (National Association for the Advancement of Colored People) is the largest and most pre-eminent civil rights organization in the nation. We have over 2,200 units and branches across the nation, along with well over 2M activists. Our mission is to secure the political, educational, social, and economic equality of rights in order to eliminate race-based discrimination and ensure the health and well-being of all persons.