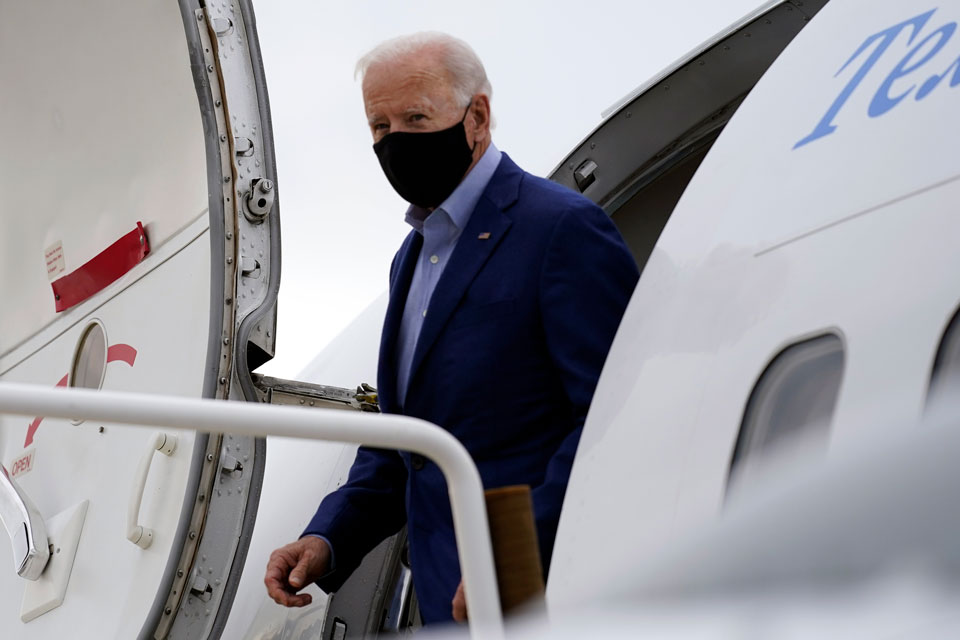 CLEVELAND (AP) — With just 35 days until the election, President Donald Trump and Democratic challenger Joe Biden are barreling into their crucial first debate Tuesday night, the most pivotal moment so far in a race that has remained stubbornly unchanged in the face of historic tumult.

Both men huddled with aides in the final hours before the debate, which will offer the candidates their biggest national stage to outline starkly different visions for a country facing multiple crises. Americans are both fearful and impatient about the coronavirus pandemic that has killed more than 200,000 Americans and cost millions of jobs, and many are concerned about racial justice, protest violence or both. 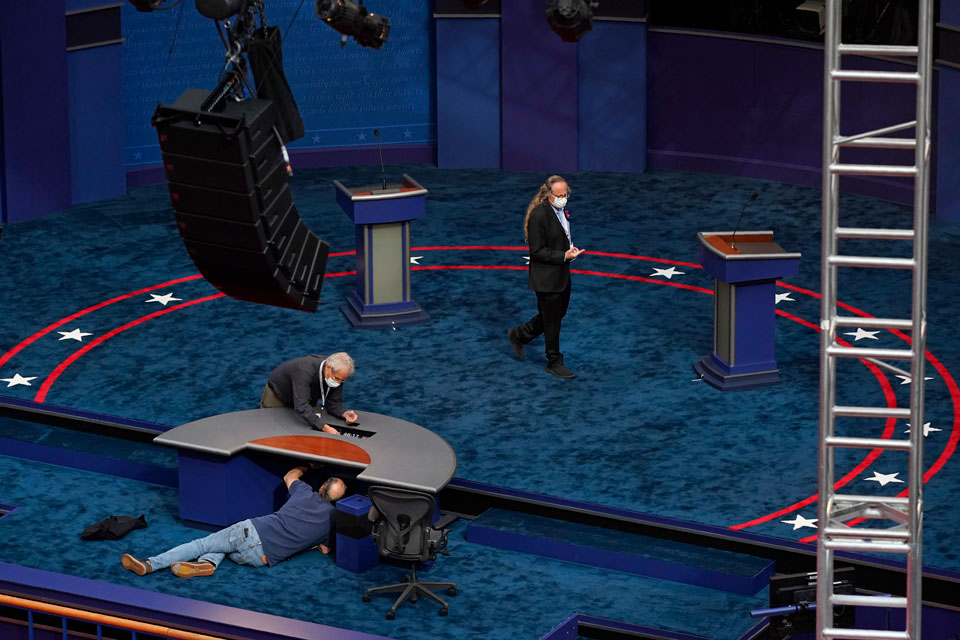 Preparations take place for the first Presidential debate in the Sheila and Eric Samson Pavilion, Monday, Sept. 28, 2020, in Cleveland. The first debate between President Donald Trump and Democratic presidential candidate, former Vice President Joe Biden is scheduled to take place Tuesday, Sept. 29. (AP Photo/Patrick Semansky)Each side hoped the debate would energize its own base of supporters even as the candidates compete over the slim slice of undecided voters who could decide the election.

Biden will step onto the Cleveland stage holding leads in the polls — significant in national surveys, close in some battleground states — and looking to expand his support among suburban voters, women and seniors. Surveys show the president has lost significant ground among those groups since 2016, but Biden faces his own questions encouraged by Trump’s withering attacks.

Trump will have arguably his best chance to try to reframe the campaign as a choice between candidates and not a referendum over his handling of the virus that has killed more people in America than any other nation. Americans, according to polling, have soured on his leadership in the crisis, and the president has struggled to land consistent attacks on Biden.

“This will be the first moment in four years that someone will walk on stage as co-equal to Trump and be able to hold him to account for the malfeasance he has shown leading the country,” said Steve Schmidt, senior campaign aide for John McCain’s 2008 Republican presidential bid and a frequent Trump critic.

“If Biden is unable to indict Trump for all that he has done, (that) would be a profound failure. There is no spinning that away.”

Leaving the White House for Cleveland, Trump pumped his fist at supporters gathered on the White House lawn but did not address reporters. He spent the morning in informal debate preparations while a more formal session was set for the afternoon once he arrived in Ohio. Among those working with the president: former New Jersey Gov. Chris Christie, former New York City Mayor Rudy Giuliani, senior White House aide Jared Kushner and former White House counselor Kellyanne Conway.

Biden held an umbrella to ward off the Delaware rain as he boarded a new, bigger campaign plane enroute to Cleveland. He, too, did not address reporters.

Though some Trump aides involved in the preparations urged the president to adopt a measured tone while selling his own accomplishments, Trump has told advisers he is preparing an all-out assault on Biden, claiming that the former senator’s 47 years in Washington have left him out of touch and that his family, namely his son Hunter, has benefited from corruption.

Biden’s performances during the primary debates were uneven, and some Democrats have been nervous as to how he will fare in an unscripted setting. But his team views the night as a moment to illuminate Trump’s failings with the pandemic and economy, with the former vice president acting as a “fact checker on the floor” while bracing himself for the onslaught that is coming.

Both sides looked to one-up each other in the hours before the debate.

Biden released his 2019 tax returns just days after the blockbuster revelations about Trump’s long-hidden tax history, including that he paid only $750 a year in federal income taxes in 2016 and 2017 and nothing in many other years. The Bidens paid nearly $300,000 in taxes in 2019.

Meanwhile, trying to hammer home a claim that Biden is not up to the job of president, Trump’s campaign pushed out a number of pre-debate accusations, including that the former vice president asked for numerous breaks during the 90-minute debate and had backed out of a search meant to rule out that either man was wearing an earpiece from which he could be fed answers.

The Biden campaign denied the accusations and, in a conference call Tuesday afternoon, chided reporters for biting on a Trump gambit.

“We’re in the middle of a global pandemic,” Biden senior campaign adviser Symone Sanders said. “Is this what you all would really like to spend your time on, these false, crazy, random, ridiculous assertions by the Trump campaign?”

The president’s handling of the coronavirus was likely to dominate much of the debate. The pandemic’s effects were in plain sight, with the candidates’ lecterns spaced far apart, all of the guests in the small crowd tested and the traditional opening handshake scrapped.

The scene in Cleveland was notably understated compared to typical election years, with none of the pomp and pageantry. Instead of the usual auditorium, the debate is being held in an atrium on Case Western University's campus and signs were placed on two of every three three chairs reading, “Thank you for not sitting here in observance of social distancing.”

And Biden's selected guests gave clues that he wanted to focus on the virus, inviting small business owners dealing with the struggling economy and Kristin Urquiza, who spoke powerfully at the Democratic convention about her father's death to COVID-19. Trump, meanwhile, was inviting Giuliani and UFC fighter Colby Covington.

The debate was also shaped by an extraordinary confluence of other recent events, including the death of Supreme Court Justice Ruth Bader Ginsburg, which allowed Trump to nominate a conservative jurist to replace a liberal voice and perhaps reshape the high court for generations.

The tumult of 2020 was difficult to overstate: COVID-19 has rewritten the rules of everyday life, schools and businesses are shuttered and racial justice protests have swept into cities after several highly publicized killings of Black people by police.

But the impact of the debate — or the two to follow — remained unclear in an election year like no other. Despite the upheaval, the presidential race has seemed largely unchanged since Biden seized control of the Democratic field in March.

While both sides anticipated a vicious debate between two men who do not like each other, the Biden campaign downplayed the night’s importance, believing that the pandemic and the battered economy would outweigh any one-night gaffe or zinger. Conversely, the Trump campaign played up the magnitude of the duel, believing it a moment for the president to damage Biden and recast the race.

That continued a curious round of expectations setting: While Trump’s campaign has of late praised Biden’s debate skills, the president has also vividly portrayed his opponent as not being up to the job, potentially allowing Biden to come off well as long as he avoids a major stumble.

“Historically, incumbents do less well in the first debate, largely because they’re unaccustomed to being challenged openly,” said presidential historian Jon Meacham. “The most important single debate in terms of direct impact on outcome came 40 years ago, with the single Carter-Reagan meeting a week before the election. The key question then — ‘Are you better off than you were four years ago?’ — has fresh and compelling resonance.”