Trump and Biden Head into the First Presidential Debate 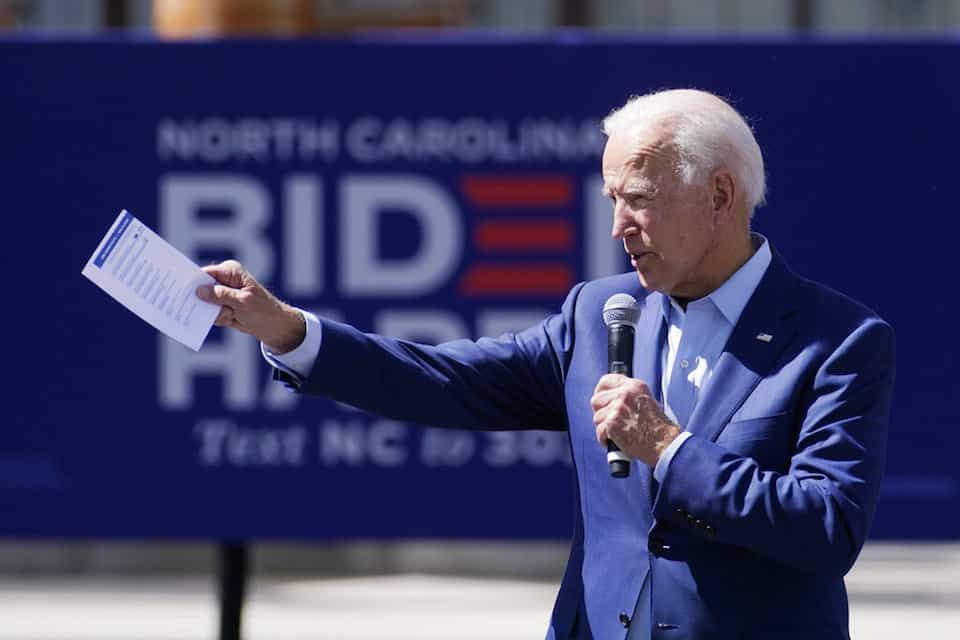 WASHINGTON (AP) — Ahead of the first debate-stage matchup between President Donald Trump and his Democratic challenger Joe Biden, each campaign is promising a stark contrast in policy, personality and preparation.

Trump has decided to skip any formal preparation. And while Biden's team believes the significance of the debate may be exaggerated, the Democratic nominee has been aggressively preparing to take on the president.

Biden's campaign has been holding mock debate sessions featuring Bob Bauer, a senior Biden adviser and former White House general counsel, playing the role of Trump, according to a person with direct knowledge of the preparations who spoke on condition of anonymity to discuss internal strategy.

Bauer has not actually donned a Trump costume in line with Trump stand-ins from previous years, but he is representing his style and expected strategy.

“I’m sure the president will throw everything he can at (Biden). My guess is that they’re preparing for that -- bombarding him with insults and weird digressions,” said Jay Carney, a former aide to Biden and President Barack Obama.;

“I think it's an important moment — I think it’s really important for President Trump, because the direction of this election has been pretty stable for a long time now, and he needs to shake it up as any candidate would who’s behind," Carney added. “The question is, can that work?”

Trump and Biden are scheduled to meet on the debate stage for the first time Tuesday night at Case Western Reserve University and the Cleveland Clinic in Cleveland, Ohio.

For some, the debates represent the most important moments in the 2020 campaign's closing days, a rare opportunity for millions of voters to compare the candidates' policies and personalities side-by-side on prime-time television.

Trump has been trailing Biden in the polls for the entire year, a reality that gives the president an urgent incentive to change the direction of the contest on national television if he can.

Others, including those close to Biden's campaign, do not expect the debates to fundamentally change the race no matter what happens, given voters' daily struggles with the pandemic and the economy.

They also point to high-profile debates in past elections thought to be game-changing moments at the time but that ultimately had little lasting effect.

Those with knowledge of Biden’s preparations suggest he will not take the fight to Trump if he can avoid it. But on Saturday, at least, he was on the attack when he discussed his strategy on MSNBC.

“I’m prepared to go out and make my case as to why I think he’s failed and why I think the answers I have to proceed will help the American people, the American economy and make us safer internationally,” Biden said, arguing that Trump won’t persuade voters with broadsides because “the people know the president is a liar.”

Biden said he doesn’t expect Trump to articulate a detailed vision for a second term.

While Biden has said he will try to be a fact checker of sorts on stage, the Democrat is being advised to avoid direct confrontations and instead redirect the conversation to more familiar campaign themes of unity and issues that matter most to voters: the economy, health care and the pandemic.

“Arguing over facts, litigating whether what he’s saying is accurate, that is not winning to Biden,” said Jen Psaki, a former Obama aide who is close to Biden’s team. “This is an opportunity to speak directly to the American people. His objective should be to speak directly to them, but not be pulled in by Trump. That is hard.”

Trump has not been doing any formal preparation, according to aides and allies who spoke on the condition of anonymity to discuss private conversations.

No set has been constructed and aides refused to say whether anyone is playing Biden. Trump, instead, has maintained that the best preparation is doing his day job — particularly his frequent and often contentious interactions with reporters.

White House aides also scheduled an ABC town hall earlier this month to expose Trump to real voter questions for the first time in months in preparation for the second debate.

Privately some aides and allies are worried that Trump’s lack of formal preparation will lead him to fall into the same hubris trap as other incumbents in their first general election debate.

Obama, for example, famously struggled in his first matchup against Mitt Romney in 2012.

Other Trump backers are confident that the president is ready to handle any tough questions or pushback from Biden.

“The debates matter,” said Lara Trump, a senior adviser to the campaign and the president's daughter-in-law. “Donald Trump certainly did a great job on the debates (in 2016) and I think this will be no different."

“Joe Biden spent a lot of time in his basement to study up. He’s been in this game for 47 years. I assume he’ll do okay,” she said. “Quite frankly, the bar has been lowered so much for Joe Biden that if he stays awake for the whole thing it’s like maybe he won.”

The mixed messages were in line with those of Trump's allies who spent much of the year raising questions about Biden's physical and mental strength, while in recent days trying to cast him as a strong and experienced debater facing a relative neophyte in Trump.

Shaping up to be a mean fight

A former reality show star, the president is keenly aware of the power and pitfalls of live television.

Aides say he is acutely mindful of the power of “moments” to define how a debate is perceived and that he intends to make his share of them happen.

It remains to be seen how aggressively Trump attacks Biden. He has warned apocalyptically about the consequences of a Biden victory and is never one to shy away from a fight.

He is also an avowed “counterpuncher” and will surely respond to any attacks by Biden in kind.

Terry McAuliffe, the former Virginia governor and onetime national Democratic chairman, said Biden must fashion a succinct, debate-stage version of his message since the spring: draw a straight line from Trump’s personal deficiencies to his handling of the pandemic, its economic fallout, the national reckoning on race and then explain why a Biden presidency would be different.