US Marks 9/11 Anniversary at Tributes Shadowed by Virus 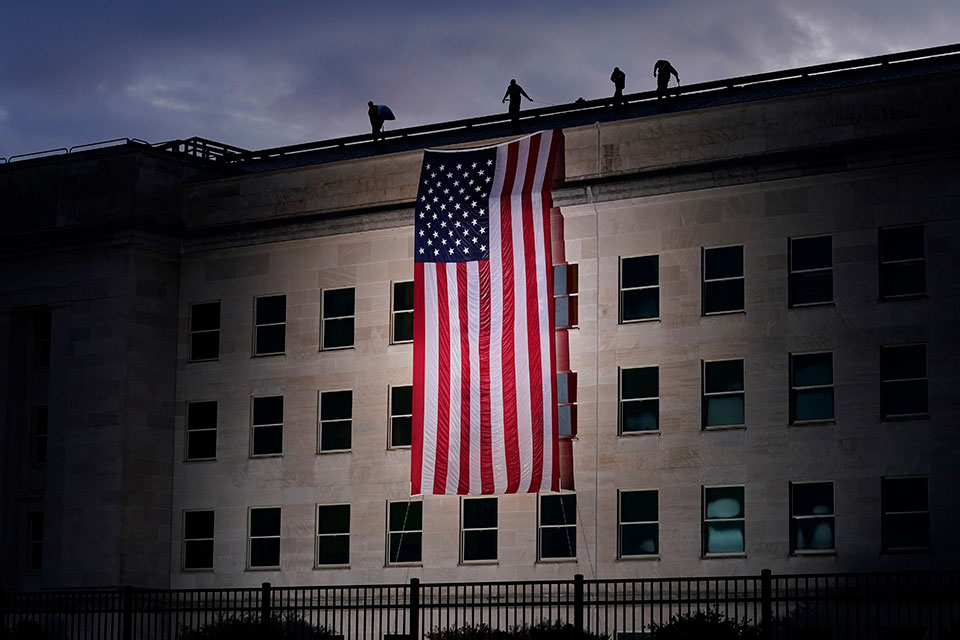 In New York, victims' relatives gathered Friday morning for split-screen remembrances at the World Trade Center's Sept. 11 memorial plaza and on a nearby corner, set up by separate organizations. 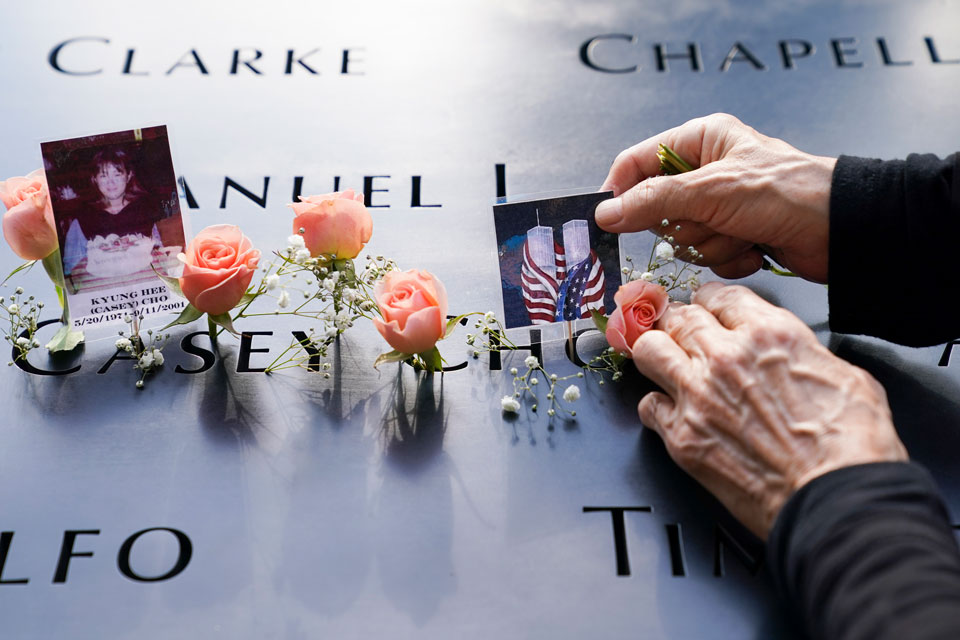 Mourners place flowers and pictures in the name cut-out of Kyung Hee (Casey) Cho at the National September 11 Memorial and Museum, Friday, Sept. 11, 2020, in New York. Americans are commemorating 9/11 as a new national crisis in the form of the coronavirus pandemic reconfigures and divides anniversary ceremonies and a presidential campaign carves a path through the observances. (AP Photo/John Minchillo)Standing on the plaza, with its serene waterfall pools and groves of trees, Jin Hee Cho said she couldn't erase the memory of the death of her younger sister, Kyung, in the collapse of the trade center's north tower.

“It’s just hard to delete that in my mind. I understand there’s all this, and I understand now that we have even COVID,“ said Cho, 55. ”But I only feel the loss, the devastating loss of my flesh-and-blood sister.”

Around the country, some communities canceled 9/11 ceremonies, while others went ahead, sometimes with modifications. The Pentagon’s observance was so restricted that not even victims’ families could attend, though small groups could visit its memorial later in the day.

On an anniversary that fell less than two months before the presidential election, President Donald Trump and Democratic challenger Joe Biden both headed for the Flight 93 National Memorial in the election battleground state of Pennsylvania — at different times of day. Biden also attended the ceremony at ground zero in New York, exchanging a pandemic-conscious elbow bump with Vice President Mike Pence before the observance began. 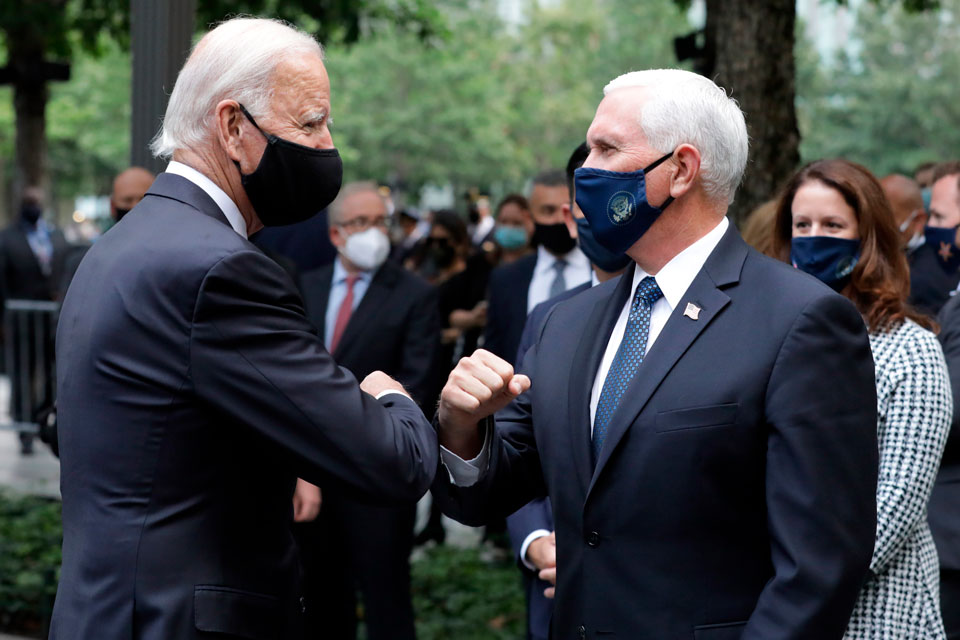 Democratic presidential candidate former Vice President Joe Biden greets Vice President Mike Pence at the 19th anniversary ceremony in observance of the Sept. 11 terrorist attacks at the National September 11 Memorial & Museum in New York, on Friday, Sept. 11, 2020. (Amr Alfiky/The New York Times via AP, Pool)In short, the 19th anniversary of the deadliest terror attack on U.S. soil was a complicated occasion in a maelstrom of a year, as the U.S. grapples with a pandemic, searches its soul over racial injustice and prepares to choose a leader to chart a path forward.

Still, families say it’s important for the nation to pause and remember the hijacked-plane attacks that killed nearly 3,000 people at the trade center, at the Pentagon outside Washington and in a field near Shanksville, Pennsylvania, on Sept. 11, 2001 — shaping American policy, perceptions of safety and daily life in places from airports to office buildings.

“People could say, ‘Oh, 19 years.’ But I’ll always be doing something this day. It’s history,” said Annemarie D’Emic, who lost her brother Charles Heeran, a stock trader. She went to the alternative ceremony in New York, which kept up the longstanding tradition of in-person readers. 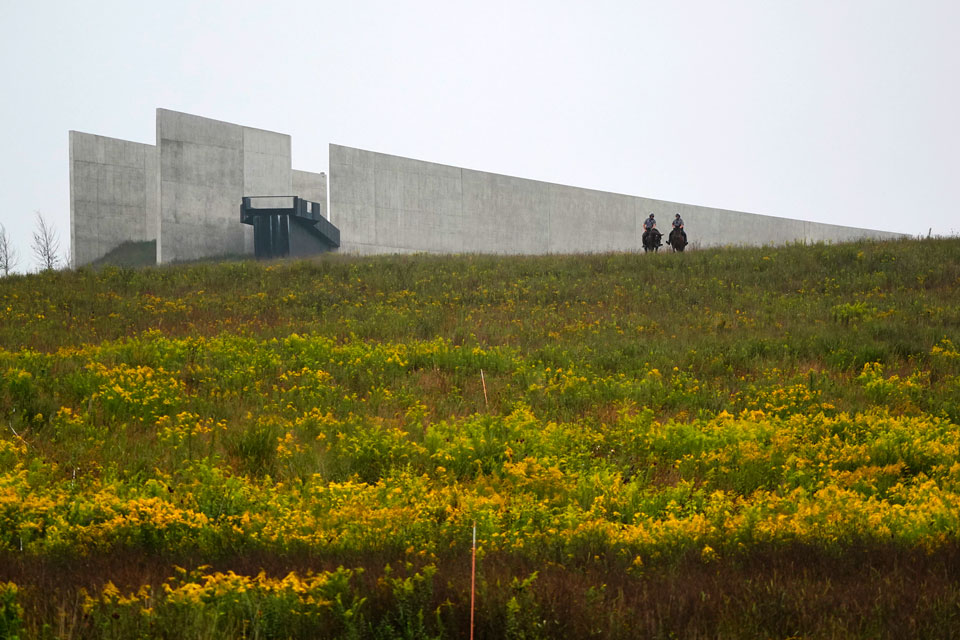 Mounted police officers sit outside the Visitor's Center at the Flight 93 National Memorial before a memorial service attended by President Donald Trump in Shanksville, Pa., Friday, Sept. 11, 2020. (AP Photo/Gene J. Puskar)Speaking at the Pennsylvania memorial, Trump recalled how the plane’s crew and passengers tried to storm the cockpit as the hijackers as headed for Washington.

"The heroes of Flight 93 are an everlasting reminder that no matter the danger, no matter the threat, no matter the odds, America will always rise up, stand tall, and fight back,” the Republican president said. 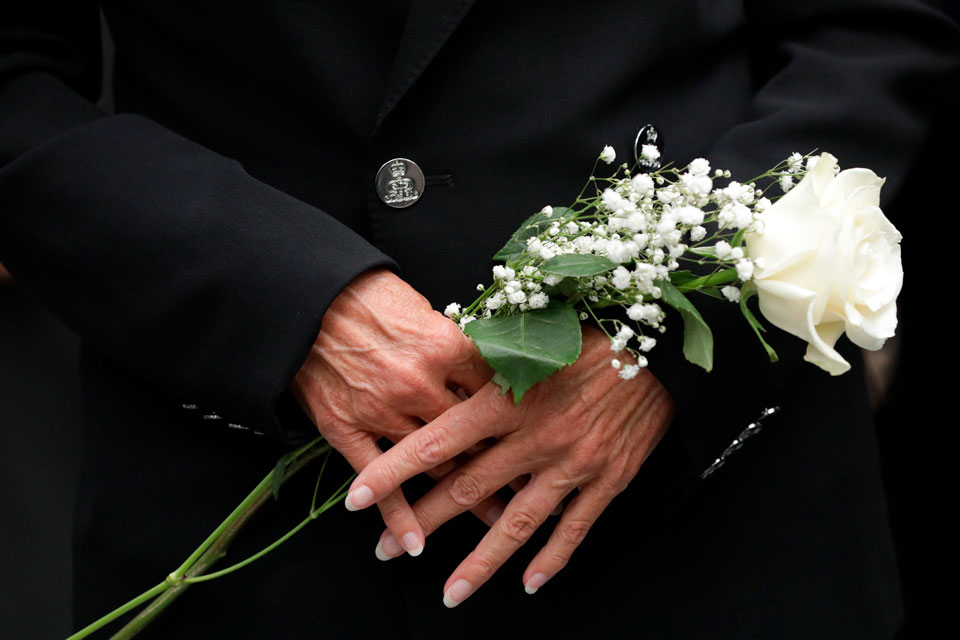 Jill Biden holds flowers as she attends the 19th anniversary ceremony in observance of the Sept. 11 terrorist attacks at the National September 11 Memorial & Museum in New York, on Friday, Sept. 11, 2020. (Amr Alfiky/The New York Times via AP, Pool)Biden visited the memorial later Friday, laid a wreath and greeted relatives of victims including First Officer LeRoy Homer. Biden expressed his respect for those aboard Flight 93, saying sacrifices like theirs “mark the character of a country.”

At the Sept. 11 memorial in New York hours earlier, Biden offered condolences to victims' relatives including Amanda Barreto, 27, and 90-year-old Maria Fisher, empathizing with their loss of loved ones. Biden's first wife and their daughter died in a car crash, and his son Beau died of brain cancer.

Biden didn't speak at that ceremony, which has a longstanding custom of not allowing politicians to make remarks. 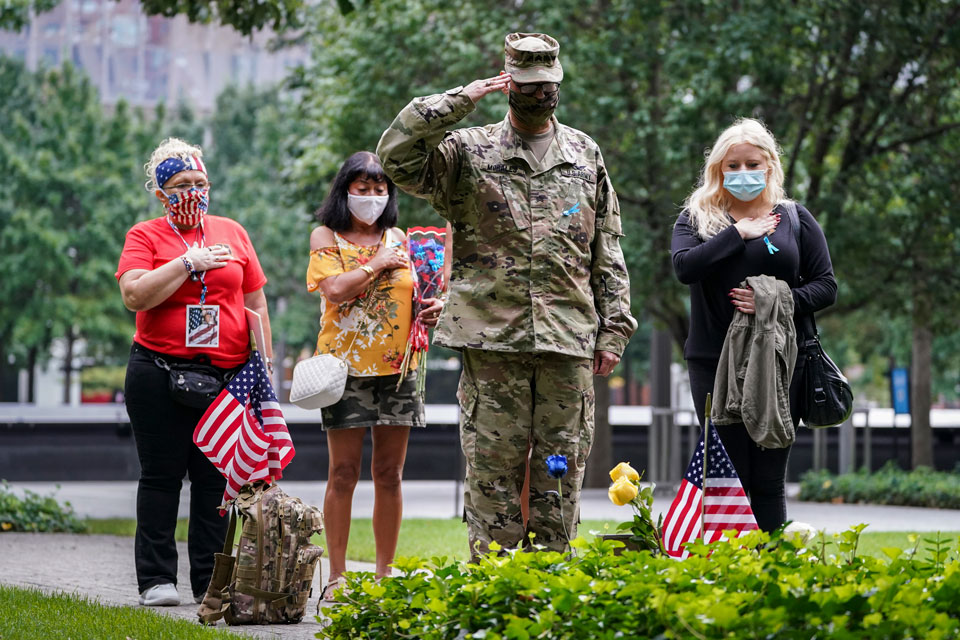 U.S. Army Sgt. Edwin Morales, center right, salutes after placing flowers for fallen FDNY firefighter Ruben D. Correa at the National September 11 Memorial and Museum, Friday, Sept. 11, 2020, in New York. The names of nearly 3,000 victims of the Sept. 11, 2001 terror attacks will be read by family members at a ceremony organized by the Tunnel to Towers Foundation. (AP Photo/John Minchillo) 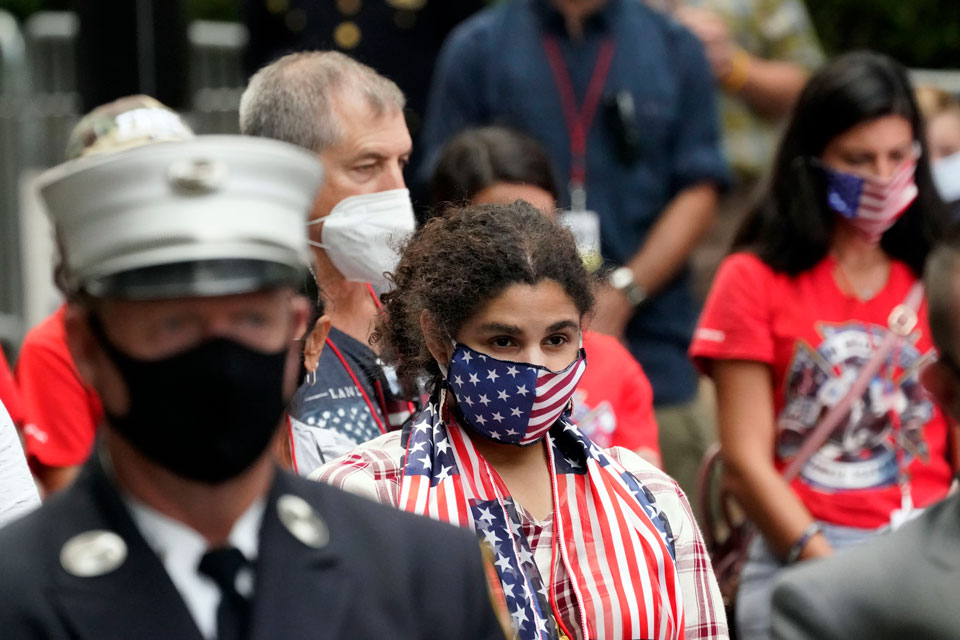 A woman wearing a flag mask joins others in prayer at the Tunnel to Towers ceremony, Sept. 11, 2020, in New York. (AP Photo/Mark Lennihan)Pence went on to the separate ceremony, organized by the Stephen Siller Tunnel to Towers Foundation, where he read the Bible's 23rd Psalm. His wife, Karen, read a passage from the Book of Ecclesiastes.

“For the families of the lost and friends they left behind, I pray these ancient words will comfort your heart and others,” said the vice president, drawing applause from the audience of hundreds.

Formed in honor of a firefighter killed on 9/11, the foundation felt in-person readers were crucial to the ceremony's emotional impact and could recite names while keeping a safe distance. By contrast, recorded names emanated from speakers placed around the memorial plaza. Leaders said they wanted to keep readers and listeners from clustering at a stage.

As in past years on the plaza, many readers at the alternative ceremony added poignant tributes to their loved ones’ character and heroism, urged the nation not to forget the attacks and recounted missed family milestones: “How I wish you could walk me down the aisle in just three weeks,” Kaitlyn Strada said of her father, Thomas, a bond broker.

One reader thanked essential workers for helping New York City endure the pandemic, which has killed at least 24,000 people in the city and over 190,000 nationwide. Another reader, Catherine Hernandez, said she became a police officer to honor her family's loss. 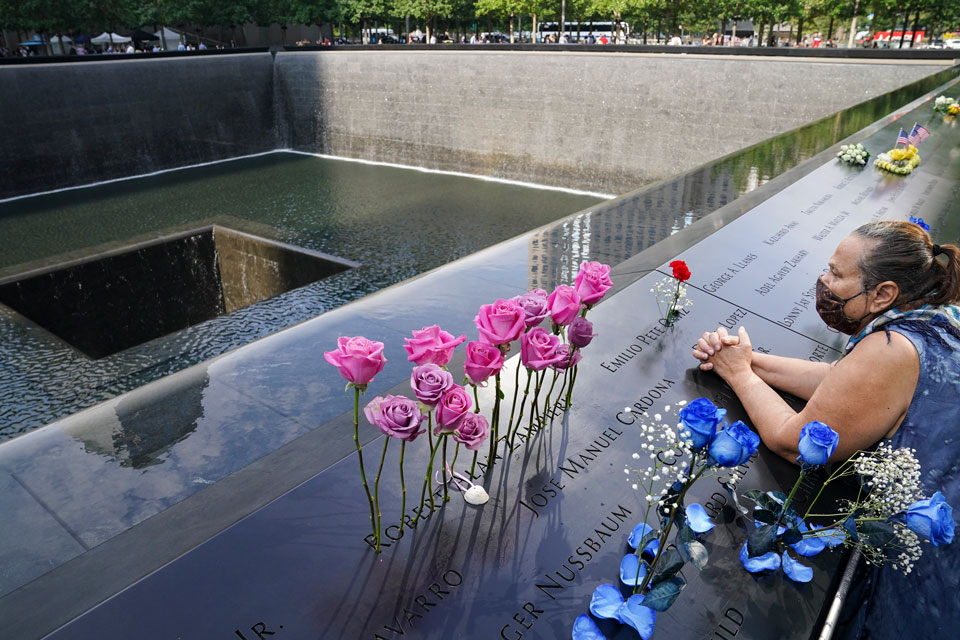 A mourner prays over the name cut-out of the deceased Emilio Pete Ortiz at the National September 11 Memorial and Museum, Friday, Sept. 11, 2020, in New York. (AP Photo/John Minchillo)Other victims' relatives, however, weren't bothered by the switch to a recording at the ground zero ceremony.

“I think it should evolve. It can't just stay the same forever,” said Frank Dominguez, who lost his brother, Police Officer Jerome Dominguez.

The Sept. 11 memorial and the Tunnel to Towers foundation also tussled over the Tribute in Light, a pair of powerful beams that shine into the night sky near the trade center, evoking its fallen twin towers. The 9/11 memorial initially canceled the display, citing virus safety concerns for the installation crew. After the foundation vowed to put up the lights instead, the memorial changed course with help from its chair, former Mayor Mike Bloomberg, and Gov. Andrew Cuomo.

Tunnel to Towers, meanwhile, arranged to display single beams for the first time at the Shanksville memorial and the Pentagon.

Over the years, the anniversary also has become a day for volunteering. Because of the pandemic, the 9/11 National Day of Service and Remembrance organization is encouraging people this year to make donations or take other actions from home.