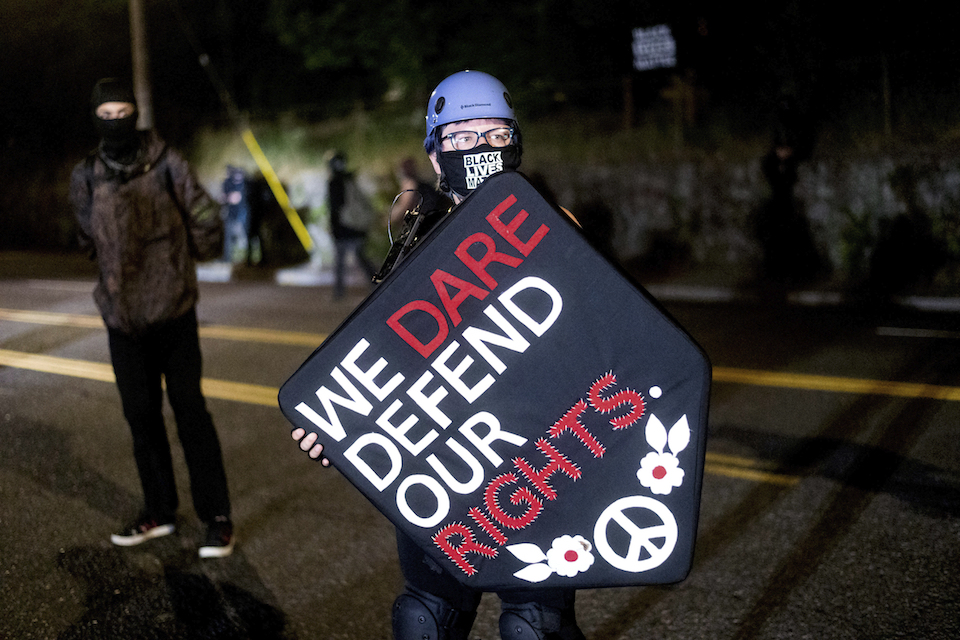 The documents included shots of security footage that showed the suspect, Michael Forest Reinoehl, ducked into a parking garage and reached toward a pocket or pouch at his waist before emerging to follow the victim, Patriot Prayer supporter Aaron "Jay" Danielson.

Danielson was holding bear spray and an expandable baton and had a loaded Glock handgun in a holster at his waist, according to the documents.

Witnesses told police that just before they heard gunshots someone said something like, "wanna go," which is frequently a challenge to a fight.

Danielson was shot in the chest and died at the scene.

The court documents were filed to support second-degree murder charges against Reinoehl, who was a supporter of antifa — shorthand for anti-fascists and an umbrella description for the far-left-leaning militant groups that resist neo-Nazis and white supremacists at demonstrations and other events.

In a videotaped interview broadcast the evening of his death by Vice News, Reinoehl came close to admitting he shot Danielson, a supporter of a right-wing group called Patriot Prayer, on Aug. 29 after a caravan of President Donald Trump backers drove their pickup trucks through downtown Portland.

He claimed it was in self-defense, because he thought he and a friend were about to be stabbed.

"I hate to say it, but I see a civil war right around the corner," Reinoehl, with a partially covered tattoo of a raised fist on the right side of his neck, said in the interview.

A few hundred demonstrators had met at Kenton Park Friday before making their way to the Portland Police Association building, where officers warned protesters to stay off the streets and private property.

Those who refused could be subject to citation, arrest, the use of tear gas, crowd-control agents or impact munitions, police said.

Around midnight, police ran down the street, pushing protesters out of the area, knocking people down and arresting those who they say were not following orders — as some people were being detained, they were pinned to the ground and blood could be seen marking the pavement.

Law enforcement officers used smoke devices and shot impact munitions and stun grenades while trying to get the crowd to disperse, The Oregonian reported.

The Portland Police Bureau issued a statement Saturday morning, saying some officers reported that rocks, a full beverage can and water bottles had been thrown at them, prompting police to declare the gathering an unlawful assembly.

Police said at one woman who was detained was bleeding from an abrasion on her head, and she was treated by medics at the scene before being transported by an ambulance. The Portland Police Bureau said she jumped out of the ambulance and ran away before it left the scene, however.

Their return on Friday came days after Gov. Kate Brown announced the move.

Demonstrations in Portland, which started in late May after the police killing of George Floyd in Minneapolis, are reaching 100 straight nights of protests that have been marked by vandalism and violence.

Since Floyd's killing, nights of unrest that increasingly targeted a federal courthouse prompted President Donald Trump to dispatch U.S. agents to guard the building in July.

The presence of the agents from U.S .Customs and Border Protection, U.S. Immigration and Customs Enforcement and the U.S. Marshals Service was intended to tamp down on the demonstrations but instead reinvigorated the Black Lives Matter movement.

The U.S. agents began drawing down July 31 under an agreement between the U.S. Department of Homeland Security and Democratic Gov. Kate Brown. But as the unrest has continued and picked up, federal authorities have again said they may increase their presence in the city.
_

__
Cline reported from Salem, Oregon.
___
This story has been corrected to reflect that Michael Forest Reinoehl was killed by law enforcement officers, not federal agents.