Biden Vows to Defeat Trump, End US 'Season of Darkness' 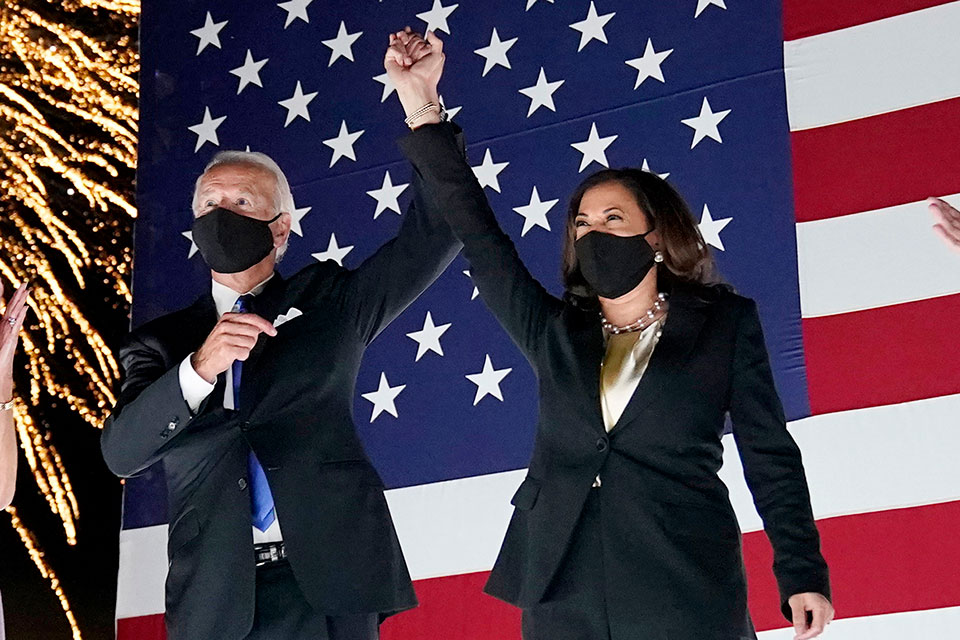 WILMINGTON, Del. (AP) — Joe Biden accepted the Democratic presidential nomination with a vow to be a unifying “ally of the light” who would move an America in crisis past the chaos of President Donald Trump’s tenure.

In his strongest remarks of the campaign, Biden spoke Thursday night both of returning the United States to its traditional leadership role in the world and of the deeply personal challenges that shaped his life. Virtually every sentence of his 22-minute speech was designed to present a sharp, yet hopeful, contrast with the Republican incumbent.

“Here and now I give you my word: If you entrust me with the presidency, I will draw on the best of us, not the worst.

"l’ll be an ally of the light, not the darkness,” Biden said. “Make no mistake, united we can and will overcome this season of darkness in America.”

For the 77-year-old Biden, the final night of the Democratic National Convention was bittersweet. He accepted a nomination that had eluded him for over three decades because of personal tragedy, political stumbles and rivals who proved more dynamic.

But the coronavirus denied him the typical celebration, complete with the customary balloon drop that both parties often use to fete their new nominees. Instead, Biden spoke to a largely empty arena near his Delaware home.

Afterward, fireworks lit the sky outside the arena, where supporters waited in a parking lot, honking horns and flashing headlights in a moment that finally lent a jovial feel to the event.

The keynote address was the speech of a lifetime for Biden, who would be the oldest president ever elected if he defeats Trump in November. Trump, who is 74, publicly doubts Biden’s mental capacity and calls him “Slow Joe,” but with the nation watching, Biden was firm and clear.

Still, the convention leaned on a younger generation earlier in the night to help energize his sprawling coalition.

Tammy Duckworth, an Illinois senator who lost her legs in Iraq and is raising two young children, said Biden has “common decency.” 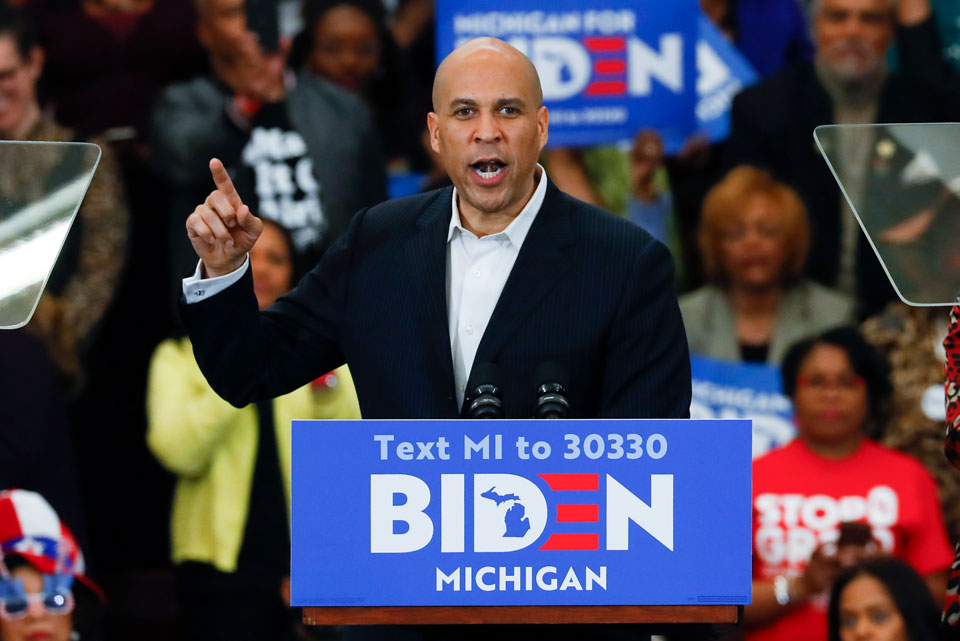 And Pete Buttigieg, the 38-year-old former South Bend, Indiana, mayor and a gay military veteran, noted that Biden came out in favor of same-sex marriage as vice president even before President Barack Obama.

“Joe Biden is right, this is a contest for the soul of the nation. And to me that contest is not between good Americans and evil Americans,” Buttigieg said. “It’s the struggle to call out what is good for every American.”

Above all, Biden focused on uniting the nation as Americans grapple with the long and fearful health crisis, the related economic devastation, a national awakening on racial justice — and Trump, who stirs heated emotions from all sides.

Biden’s positive focus Thursday night marked a break from the dire warnings offered by Obama and others the night before. The 44th president of the United States warned that American democracy itself could falter if Trump is reelected, while Biden’s running mate, Kamala Harris, the 55-year-old California senator and daughter of Jamaican and Indian immigrants, warned that Americans’ lives and livelihoods were at risk.

Biden’s Democratic Party has sought this week to put forward a cohesive vision of values and policy priorities, highlighting efforts to combat climate change, tighten gun laws and embrace a humane immigration policy. They have drawn a sharp contrast with Trump’s policies and personality, portraying him as cruel, self-centered and woefully unprepared to manage virtually any of the nation’s mounting crises and policy challenges.

Vice President Mike Pence, interviewed Friday on several morning talk shows, criticized Democrats as presenting “a very grim picture of the United States” and said the Republican National Convention next week will focus on what Trump has accomplished, including on the economy and with his coronavirus response.

Voting was another prime focus of the convention on Thursday as it has been all week. Democrats fear that the pandemic -- and Trump administration changes at the U.S. Postal Service -- may make it difficult for voters to cast ballots in person or by mail. 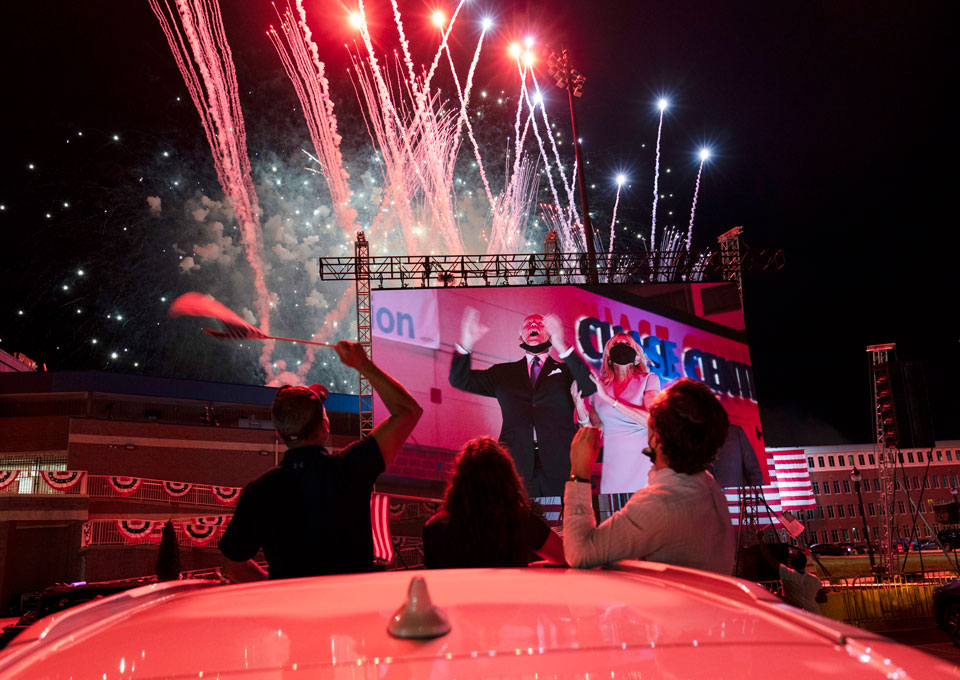 Supportes cheer from their cars as Democratic presidential candidate former Vice President Joe Biden and his wife Jill Biden are seen on a huge monitor as fireworks light up the nigh sky on the fourth day of the Democratic National Convention, Thursday, Aug. 20, 2020, outside of the Chase Center in Wilmington, Del. (AP Photo/Carolyn Kaster)Comedian Sarah Cooper, a favorite of many Democrats for her videos lip-syncing Trump’s speeches, put it bluntly: “Donald Trump doesn’t want any of us to vote because he knows he can’t win fair and square.”

Biden’s call for unity comes as some strategists worry that Democrats cannot retake the White House simply by tearing Trump down, that Biden needs to give his sprawling coalition something to vote for. That’s easier said than done in a modern Democratic Party made up of disparate factions that span generation, race and ideology.

Though he has been in the public spotlight for decades as a Delaware senator, much of the electorate knows little about Biden’s background before he began serving as Obama’s vice president in 2008.

Thursday’s convention served as a national reintroduction of sorts that drew on some of the most painful moments of his life.

“I know how mean and cruel and unfair life can be sometimes,” Biden said. He added: “I found the best way through pain and loss and grief is to find purpose.”

As a schoolboy, Biden was mocked by classmates and a nun for a severe stutter. He became a widower at just 30 after losing his wife and infant daughter to a car accident. And just five years ago, he buried his eldest son, who was stricken by cancer.

From such hardship, Biden developed a deep sense of empathy that has defined much of his political career. And throughout the convention, Biden’s allies testified that such empathy, backed by decades of governing experience, makes him the perfect candidate to guide the nation back from mounting health and economic crises.

His allies Thursday included Brayden Harrington, a 13-year-old boy from Concord, New Hampshire. The boy said he and Biden were “members of the same club,” each with a stutter they’re working to overcome.

He noted that Biden told him about a book of poems he liked to read aloud to practice his speech and showed the boy how he marks his speeches so they’re easier to read aloud.

“I’m just a regular kid, and in a short amount of time, Joe Biden made me more confident about a thing that’s bothered me my whole life,” Harrington said.

The end of the carefully scripted convention now gives way to a far less-predictable period for Biden and his Democratic Party as the 2020 election season speeds to its uncertain conclusion. While Election Day isn’t until Nov. 3, early voting gets underway in several battleground states in just one month.

Biden has maintained a polling advantage over Trump for much of the year, but it remains to be seen whether the Democratic nominee’s approach to politics and policy will genuinely excite the coalition he’s courting in an era of uncompromising partisanship.

Biden summed up his view of the campaign: “We choose a path of becoming angry, less hopeful and more divided, a path of shadow and suspicion, or we can choose a different path and together take this chance to heal.”